Not really sure what to say about this one. I did a completely unrelated gear experiment1 earlier in the day, and rather than waste the 5 gallons of 100+°F water… well, I could whip up some kind of mead in a half hour or so. And it felt like it was getting late but the sun stays up so long here in the summer so… Sunny Night, a black currant mead:

I’d been looking to do another mead. Evil Clone (Mk. III) had been on draft for a while and I knew that it was likely to kick soon. That said, I wanted to experiment with some new ingredients. So, having a bunch of hot water already in the kettle, and living like 3 minutes away from a homebrew supply store… the rest of the story kind of wrote itself.

As I mentioned above, this was an impromptu brew day. I’d performed the gear experiment in between some other house chores, and then at the end I had all this hot water that I didn’t want to just… dump. That felt tremendously wasteful.2 So I quickly drove up to my almost-too-local homebrew supply store and grabbed some ingredients.

Three pounds of Dutch Gold wildflower honey, and 49 oz. can of black currant purée. Throw another 1.5 lb. “bear” of CostCo honey into the mix and we’ve got an O.G. of 1.057… according to the hydrometer.3 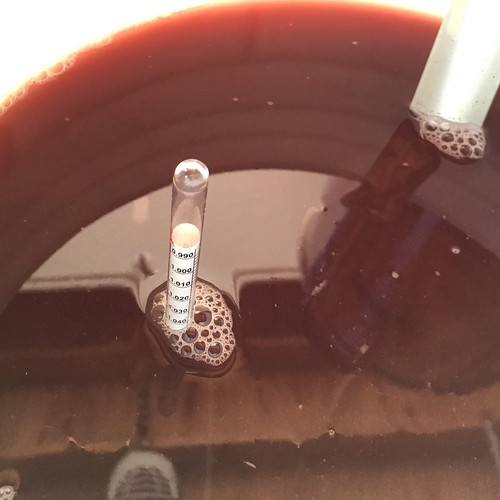 Anyway, dose it with some Campden tablets and let those do their thing until I get a chance to pitch yeast the next day.

I’ll be honest. I was pretty lazy about the fermentation here. It got 4 oz. of yeast nutrient when I made the must. And then I pitched the yeast (Mangrove Jack’s M05 — just to give it a test drive). Nine hundred milligrams of Fermaid-K at 1 day, then 2, then 3, and finally at 7 days. Temperatures mostly stuck in the low 70s °F.

Final gravity was reached after about 13 days. At that point, I racked it off lees, into a keg, and put it on CO₂ at about 12 PSI for a few days. (Figured that I’d try ye olde set-it-and-forget-it method.)

If you remember Fenberry Draught, the profile is a lot like that — though a little bit stronger. 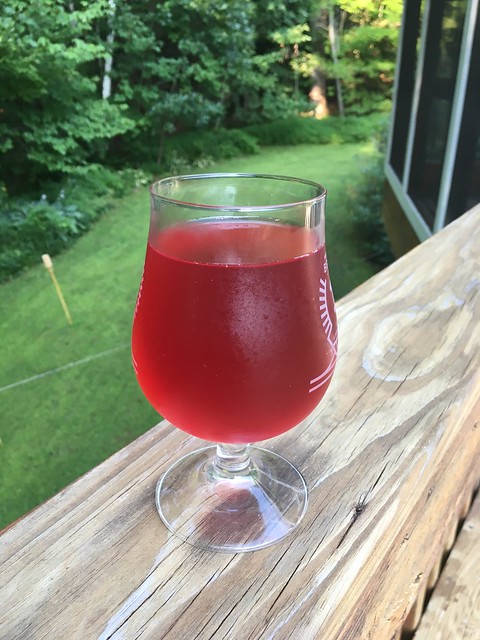 AROMA. Fruit-forward, and you can smell the tartness. If I didn’t know that it was black currant though, I’d have placed it as cranberry. Honey impression is mild and leans vaguely floral. No obvious fermentation-related contributions.

APPEARANCE. My brain goes either to “strong pink” or “soft red”. Darker than a rosé but also not the richer purple that I think of when I think “black currant”. (To be fair to myself, it isn’t an ingredient that I’d worked with before and hadn’t realized just how much it gets diluted and hence lightens up.) Moderately decent clarity, but some haze — though I fermented this for present-use and didn’t bother trying to clear it. Holds a decent amount of bubbles at the rim of the glass.

FLAVOR. Largely follows the aroma: fruit-forward, and is evocative more of cranberry than of black currant. (Granted both offer up some tartness, but it’s the impression, you see…) Mild acidity. A little tannic on the finish. Honey impressions are low overall, strongest in the mid-palate, with some floral notes retronasally. If it isn’t obvious: the black currant is largely out-competing the honey here, but it also comes across more like cranberry.

MOUTHFEEL. Light body; quite dry. Acidity and tannins in the finish give it a bit of puckering. Carbonation is moderate to medium, and plays well at this strength. No perceptible alcohol warming.

OVERALL IMPRESSION. A fun experiment, but probably not better than a good mead. I’ve stashed a few still bottles for competition, but that’s mostly just to see how they play for feedback. I’m enjoying it, but I think I’ll try to use it for cocktails, mostly.

I don’t know that I’d make this again, but I learned a few things.

First, the M05 yeast is decent-enough for meads. I feel like it’s on par with something like US-05. I’ll probably stick to D-47 and Belle Saison for most meads.

The Dutch Gold wildflower honey? It’s fine. But that orange label stuff I can get at CostCo seems to do just as well, if not better. And at almost half the cost.

Black currant? Maybe it’s just the specific purée that I used but… it wound up reading a lot like cranberry. And the color wasn’t as dark. And yet it still overwhelmed the honey. I don’t know… I’ll have to meditate on this one. Maybe it’s just the manufacturer of this purée? Maybe I need to get to know this fruit better?

And then there’s the set-it-and-forget-it carbonation method! I’ve been using burst carbonation more-or-less since the beginning of my kegging adventures. For the most part, that has done well enough. That said, I’ve had my fair share of worry over whether a given batch has been over-carbonated. (And/or discovering that the regulator dial is messed up and not knowing what pressure is actually being applied etc.) So if nothing else, it was good to see just how long it took me to get to acceptable levels of carbonation. (For what it’s worth, it took about five days at about 12 PSI at about 40°F to get to a carbonation level that I perceived as acceptable.)

The recipe for Sunny Night is as follows:

Use Champlain Water District water and dose it with 1 Campden tablet per gallon.