With 2018 having been flush with hoppy American-style beers, Belgian-inspired ales, and meads, I was feeling like a change of pace. It was time to dust off my Vienna mit Roggen recipe and give an all-grain version a test drive. And that beer is Sirius Moonlight (Mk. II):

I’d enjoyed the original partial mash batch of this, having written: “I don’t know that it’s exactly a Vienna, but I like it and would make it again.” Certainly though, given the whole “Vienna mit Roggen” conceit, my intent was to try to make a recognizable Vienna Lager with some rye character. So that challenge was on. And while there are many lager styles that are on my to-brew list, I also noticed over this past year that my partner had taken a shine to the Vienna style.1

So that’s what bumped it up on the ol’ brewing schedule.

I took a quick re-visit of the recipe, fine-tuned it a little for all-grain,2 and refined it again to see about getting the balance right with the rye.

All things considered, it was just about the template of a typical brew day for me. I got everything set up and milled my grains and hit the flame to start heating the strike water. 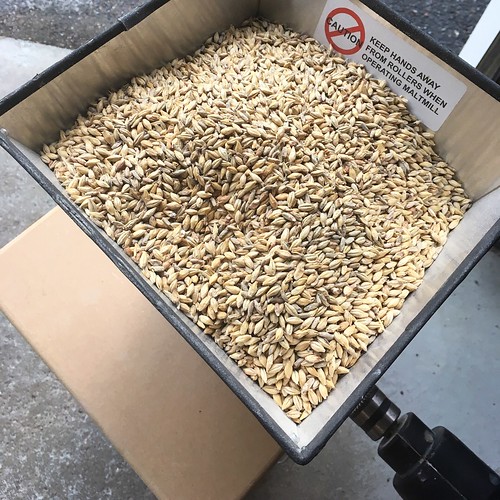 I mashed in at 152°F and held it as steady as the insulation would let me for 75 minutes. I had about 7 gallons of pre-boil wort (which I immediately added my first wort hops to) that appeared to be at 1.042, according to the refractometer. 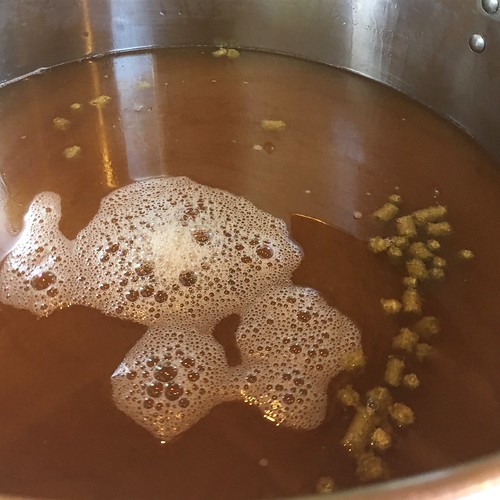 I carefully skimmed off the hot break as the wort came to a boil and the proceeded to… boil wort for an hour, hitting it with 1 oz. of Hallertauer Mittelfrüh with 5 minutes remaining. I chilled it as fast my little chiller could manage and did my post-boil science: about 5.75 gallons in the kettle and the hydrometer reading 1.050 after temperature calibration and offset adjustments. 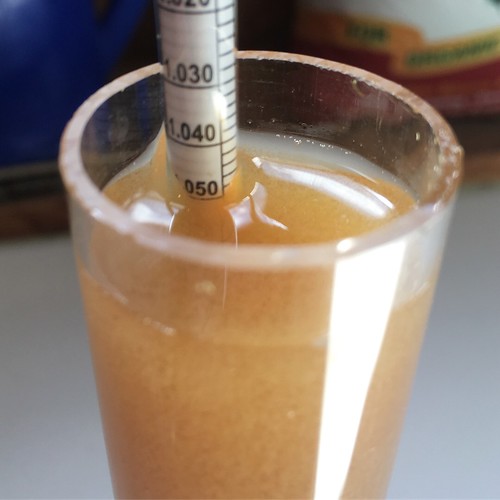 I ran off 5.25 gallons into the fermentor and moved it into my fermentation chamber to get it the rest of the way down to pitching temperatures. In the meantime though, I had to admire that color…

It took about three hours for the fermentation chamber to chill the wort sufficiently that I felt like I could pitch. Though I’d originally planned to use Wyeast 2308, my local home brew supply was out of it. Feeling flexible on the issue, I had picked up a pair of sachets of W-34/70 and proceeded to rehydrate them with a little Go-Ferm. 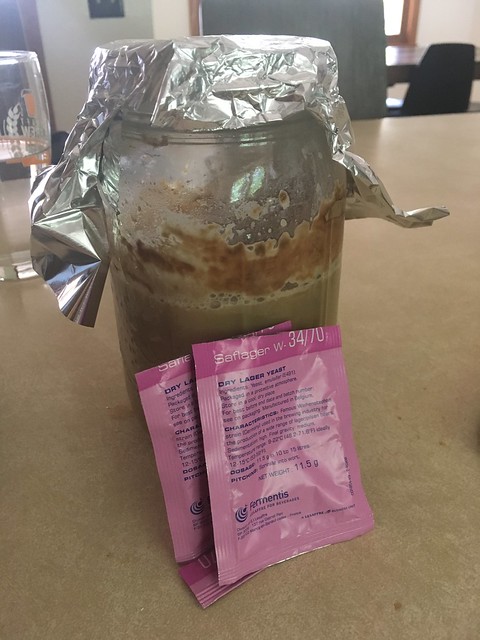 At +89 hours, I took the first gravity reading. I sighted 6.6°Bx on the refractometer. BeerSmith converted this to 1.011 but that seemed entirely too low to me. Even with a recent calibration, I find that this particular instrument tends to drift toward readings that are -0.004 from where they ought to be.3 Betting that that was the case, I assumed the gravity was actually 1.015 and did a little math… 1.031 was the presumptive 50% of F.G. and so I was pretty well below that at this point. If I was staying true to my lager method then I should already have been raising the temperature for the diacetyl rest. Just the same, I opted to give it a few more hours.

Starting at +112 hours, I bumped the temperature on the controller up by 5°F; and again every 12 hours until the beer was at 66±1°F. I held it there for a couple days — until +220 hours. I took a hydrometer reading and read a final gravity of 1.010 after calibration and offset adjustments. The sample was tasting good (or at least “like it should”) at that point and so I started to lower the temperature: -5°F every 12 hours until it was down to 36°F. Then, after 12 hours at 36°F, I fined it with gelatin, gave it a few more days of cold conditioning, and then kegged it.

After kegging, I put it on gas at 13 PSI and just… decided to wait until it was carbonated. I knew full well I was “supposed to” lager it for a couple of weeks but… I didn’t think I would really be able to wait that long.

But then it cleared and matured (much more rapidly than I thought) and I said: “You know, that works. I got more-or-less what I was after!” 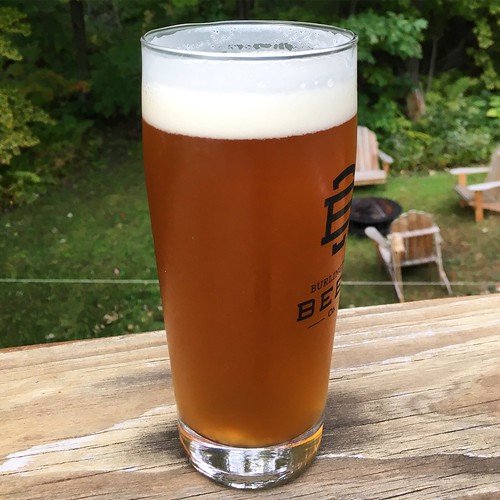 FLAVOR. …follows aroma. Leads with a moderate toasted bread crust impression that intensifies mid-palate, but never gets above medium. Low grainy notes also come into play mid-palate, with an assertive presentation during the finish. Low floral and spicy hop flavors throughout. Retronasal character is subtle but largely spicy followed by grainy. Clean fermentation profile, no obvious esters; no perceptible diacetyl, nor DMS. Medium bitterness. Balances to bitter. Dry finish, but not bone dry.

OVERALL IMPRESSION. Much more of a Vienna than its predecessor, and I bet could likely place in a competition,4 but for all my mit Roggen conceits… there just isn’t enough of the rye. So with respect to that point, the original batch had 23.5% rye and this one was about 16.8%. So not only did I not come up — but I went down. Getting to 30% (or even up to 45%) may be necessary to make those elements prominent. But then what else needs to be re-balanced?

If I wanted more of a “straight” Vienna then I’d eliminate the rye and just sub all the gravity back in from Vienna malt.

The melanoidin helps to develop the malt character without having to go through with a decoction, and I’d consider even bumping up the percentage to as much as 15%.

All other things being equal…? The rest is probably tweaks. The Mt. Hood that I used seems to work OK, but I wonder if using all true German hops would make a difference. The BEST malt works for me, but I wonder how it would compare to Weyermann? And of course, I need to bite the bullet and get myself a good pH meter and get back on the horse as far as those measurements go — I’m convinced I can dial in my water better, and make all my beers better.

All that said… I can definitely say that the Mk. II batch of Sirius Moonlight was a big improvement over the original, and that I’ll enjoy drinking this throughout the next few weeks. I’ll just have to try and remember to save some for A. 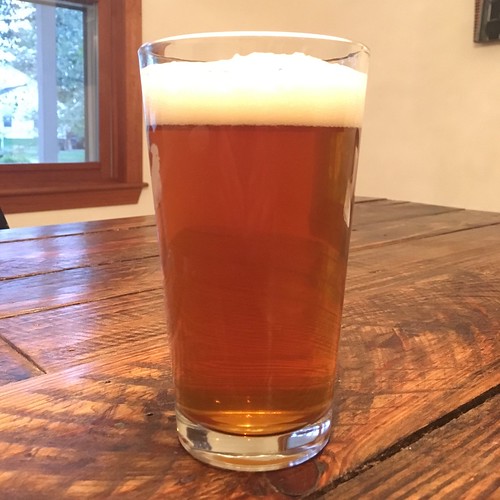 The all-grain (BIAB) recipe for Sirius Moonlight (Mk. II) is as follows: