With summer coming, it seemed I should brew some kind of easy-drinking sessionable beer. Something simple. Like an American Wheat that I could use as a glorified starter for an up-coming Wheatwine. Thus was Lazy Rabbit formulated.

My first thought was to riff on the now defunct Chasing Rabbits,1 but looking over my tasting notes and an old sell sheet, I thought maybe that’s kinda more of a wheaty IPA? Then I remembered Weikert’s article on the style, and decided to turn out something that was… almost exactly what he spelled out in there.

After some very minor hiccups with my mill,2 I got down to business, reminding myself to take it easy and just let it be a leisurely brew day. Mashed in just a bit on the high side, but left the lid off for a few minutes. 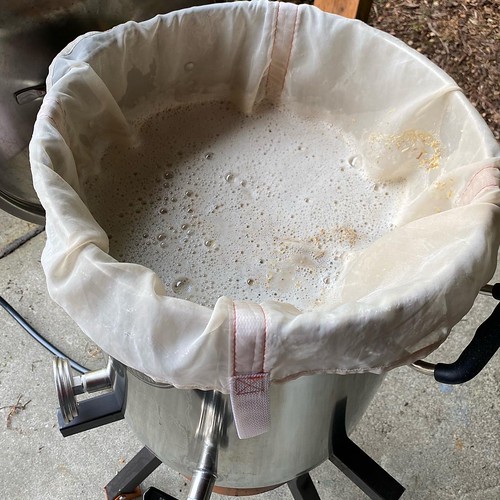 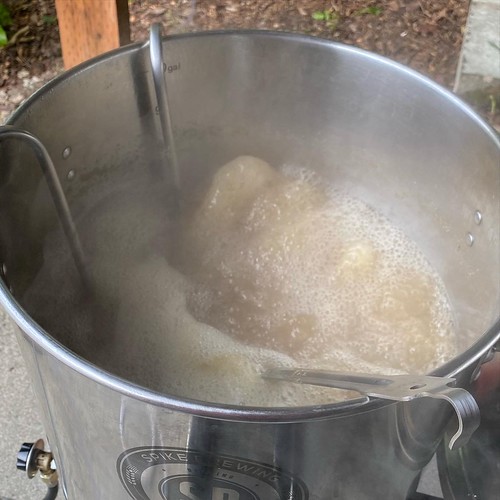 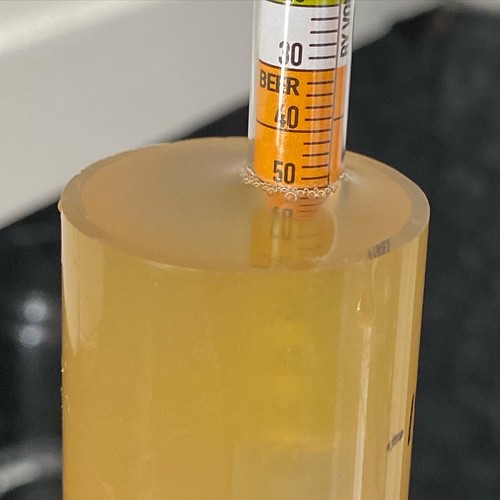 I’d built up the yeast with a 1 liter starter to get a slightly-more-than-adequate cell count. When the wort had sufficiently cooled (i.e., 62ÂºF), I decanted the starter down to approximately 500 ml and pitched that. Set the controller for 62Â±1ÂºF and… let it ferment.

After about 52 hours post-pitch, the activity in the blow-off bucket had all but completely stopped. I took a small sample for gravity. The refractometer showed 6.4ÂºBx which BeerSmith converted to 1.009. Could it be “done” already? Given that 1.011 was the estimated F.G., it certainly could be.

I took another gravity reading two days later and 5.6ÂºBx which BeerSmith converted to 1.004.4 And as for that tiny sample? It was still tasting like a young beer.

I decided to give the beer at least a few more days to mature and let those yeast flocc out. But things got a little hectic on the home front and a couple of days turned into two weeks which … given that I planned to re-pitch probably wasn’t the worst idea.5

It’s a bit hoppier than I’d planned, but it’ll do the trick. 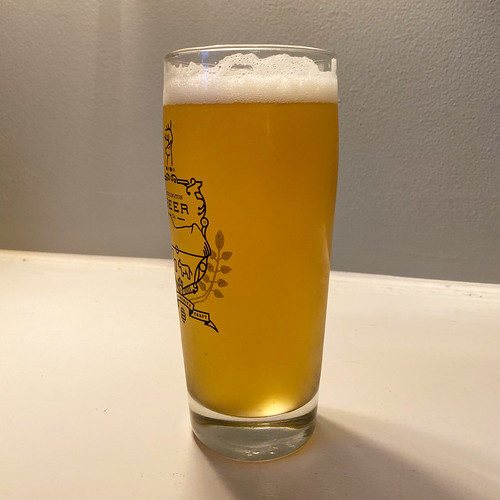 MOUTHFEEL. Medium-light body. Carbonation is just on the high side of medium; lively but not prickly. Perceptible alcohol warming. No significant creaminess. No detectable astringency.

OVERALL IMPRESSION. Very good example of the style,6 and could be excellent with some minor tweaking. Malt character seems about right, but itâ€™s a little too hoppy and that throws it out of balance. Fermentation was well-managed, but the alcohol is detectable here in a style that should be more sessionable and easy-drinking. Recommend dropping gravity a couple of points and dialing back the late hops. That said, itâ€™s a pleasing beer to drink.

While American Wheat Beers have not historically been my favorite style, there are a couple that I’ve enjoyed immensely â€” Gumballhead and Oberon come immediately to mind. I’m iffy on my own interpretation here. The malt character is one that I like, but it’s overshadowed by the hops â€” and the hops areâ€¦ not the best combination. (The individual components are each appropriate for the style, but they’re over-done and don’t fully marry synergistically.) Were I to make this again, I’d probably cut the late hops by half, and probably just stick with one varietal.

That said â€” this will be a fine beer to have sitting out on the back deck as it warms up around here.

The all-grain (BIAB) recipe for Lazy Rabbit is as follows:

Starting with the Seattle municipal water profile (carbon filtered) as a base, target the Yellow Balanced profile in BeerSmith for: