Boot camp to war and
back home to fanfare (but not).
It’s raining oil.

I’m not really sure what to say about Jarhead. I’d heard good things about it. I like Jake Gyllenhaal as an actor. Jamie Foxx is on the rise. Sam Mendes directed American Beauty for crying out loud. So why did it sit on my shelf for a month?

It shipped to us on September 20th and it wasn’t until last night (29-Oct) that we finally got around to watching it. And of course, the whole time we’re watching it, I’m saying to myself: Why didn’t we watch this earlier? 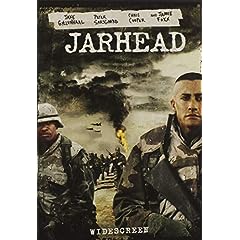 Possibly because I’m sick of discussing and thinking about war. And Iraq. And the politics that dance around the military dancing around the politics. But I think it’s fair to say that that is just me being avoidant.

The film was (by far) better than I even expected it to be. It was a fair treatment of the subject matter — not a complete demonization of the military but definitely a far-from-glorifying look at the life of a Marine scout sniper. If even half of it is true: it goes a long way in explaining why every ex-Marine I’ve had as a boss was a complete sociopath.

What really made this film for me was the way that Mendes played around with surrealism and absurdism. The most distinct dream sequence (i.e., Gyllenhaal as Swofford vomiting sand) was weighty and palpable, adding a dimension that could not possibly have been portrayed with any kind of strict realist approach. The scene transitions out into another surreal scene with grace and poise and not a little bit of clever handling. The scene with horse in the oil fields has a similar elegance to it. Unfortunately, I also get the feeling that the producers or the studio execs caught wind of this and told him to put the brakes on that. “People that are going to see Marines on film aren’t going to get this surrealist bullshit.” I could almost hear them saying it. But that’s one of the things that made it work so well.