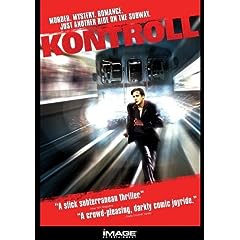 If you haven’t seen Kontroll

yet: make it your next rental. I could not believe how excellent this film was. A surreal head trip from a brilliant Hungarian director, Kontroll follows the troubled ticket inspector Bulscú Bulcsú and his crew through some subterranean tribulations as a hooded figure pushes travelers into the paths of on-coming trains.

But it’s not really a murder mystery. Not really.

The murders just give us a grisly yet accessible back-drop to pull us into this bizarre tale of … redemption? Bulscú Bulscú is certainly our stereotyped Western vision of the self-sacrificing hero, that’s for sure.

There’s certainly a sense of risk that follows both our character and the film’s plot that’s engaging and (again) accessible but without being cloying. What it captured most (for me at least) was the existential horrors of pride and success and the interminable spiritual atrophy that comes from an utter retreat from any threshold thereof.

Don’t let the cheesy American tagline or the obvious-on-the-surface symbolism (sorry, wasn’t sure how to get around that pun) fool you: this one is more than worth it.

nice review of a great movie! only one thing, isn’t it Bulcsú? and in FF2 this looks good, however in IE, there’s a weird 3rd column for your CC license and the picture at the top has a margin on the right between it and the border