Homebrew #6 was my third solo brew as Tilde Gravitywerks: a British style bitter (and/or English pale ale) which I wound up calling Little Ponder: 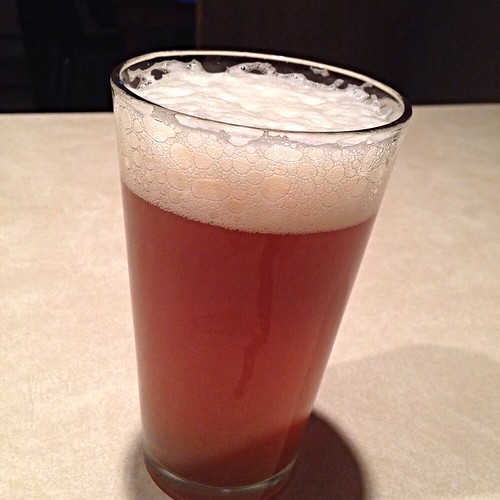 Even before I brewed Felicitas, I wanted to brew some kind of British-inspired bitter or pub ale — something like Abbot Ale or Boddington’s. I don’t drink much of this style these days, but there was a time when beers like these were my go-to. After sifting through a few recipes and kits1, I eventually settled on NortherBrewer.com’s “Innkeeper” kit. Mostly because I’m a sucker for something marked “limited edition”, but also because the reviews all seemed very favorable.

Let’s also admit that I was excited to have something that I could expect to have ready in only four weeks. (I got a little impatient after all these 6+ week brews.) 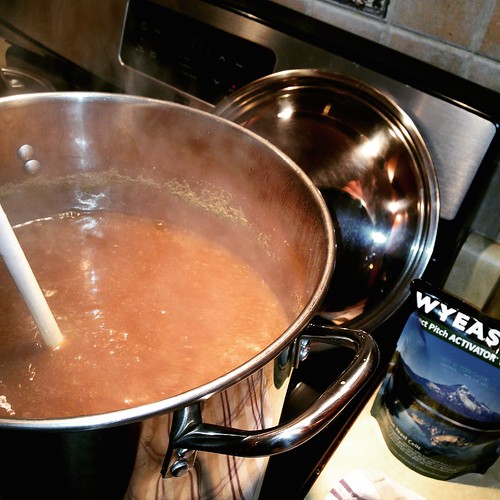 A pretty straightforward brew — the Maris Otter malt extract syrup is the showcase item here, but there’s a little corn sugar thrown into the wort at the end there for added sweetness. Hops are what you’d expect for the style: Fuggles, Kent Goldings, and Styrian Goldings. Then there’s that West Yorkshire yeast… Which brings me to a brief side note of an anecdote:

I was concerned that the viability of the yeast wasn’t going to be quite good enough to hit the attenuation I was seeking. I headed up to my local HBS to see if I could score a second pouch of West Yorkshire. After talking it through with one of the guys there, he had me convinced that, given my target original gravity, that one pouch would be just fine. Come brew day, when I pitched, I saw activity in the airlock almost immediately. Granted, it also died down to almost zero after a couple of hours before going into a much more normal rapid climb. Nevertheless: that stood out to me as interesting. Of course, it was also interesting that every time the bubbles seemed to taper off, they would come back again.2 Ultimately attenuation wound up being something like 79.07% — damn respectable. 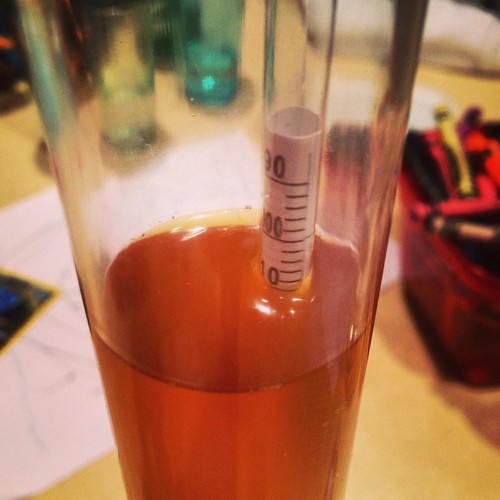 Little Ponder’s original gravity was 1.043 (right on target!) and we finished at about 1.009, giving us an ABV right around 4.47%. From a flavor perspective, it’s a winner to my taste buds: biscuity and mildly fruity sweet, with just the right amount of bitterness at the end. It’s got a nice coppery color that was real similar to Abbot Ale when I put them side-by-side (see below). Another interesting note was that it gets a big foamy head when I pour it, but overall the carbonation is pretty low — not much in the way of bubbles there. After having sampled a couple of them, there are some obvious similarities with Oh Darwin in terms of flavor, but I’m thinking that’s mostly because of the sweetness and mostly from the sugar adjuncts that they share; that being said, where Oh Darwin is effervescent, Little Ponder is just a shade or two above flat. Overall, it fits with the style pretty well — so whether you call it a “British bitter” or an “English pale ale”, it’s an easy-drinking session beer. 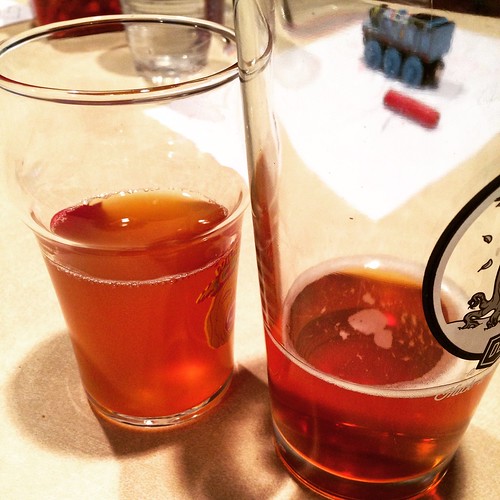 One Response to Homebrew #6: Little Ponder