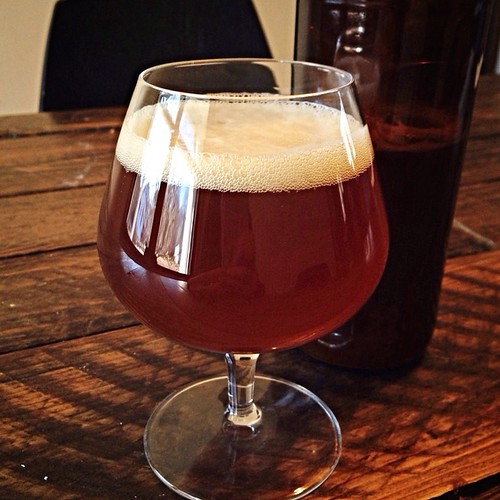 We’ll rewind to the brewing notes in a moment, but let’s get the tasting notes out of the way first because… Oh my! Oh yes! This is a delicious beer.

The look: It’s an amber, leaning to copper, but I can’t help but think gold-orange. It’s darker than I expect from a saison, but it’s technically within the BJCP guidelines. It has a nice one-finger off-white head on the pour, and while that faded a bit fast, it did leave a nice ring of bubbles. It also clarified nicely, though it’s too dark to really be “clear”. The smell: An effervescent nose, sweet from the candi sugar. Some fruity esters. The flavor: Mildly sweet with spiciness — half from the ginger, and half from the Belle Saison. Hints of lemongrass on the tail. Finish is pretty dry, and a little tart.2 The feel: On the lighter side of medium-bodied? Alcohol notes aren’t very prominent. Fairly effervescent from the carbonation.

Anyway… Indicant Veris was based on the Ginger Snap Saison kit from NorthernBrewer.com. Brew day came and we went along with that recipe. (Same as usual with the boiling and the hopping etc.) One thing that stuck out to me was the crystallized ginger. That got added late-ish in the boil (10 minutes to go) and for some reason I expected that to completely dissolve, but it did not; there was a chunk left over in the kettle at the end. The other unexpected thing… The recipe called for an expected original gravity of 1.058, but somehow every reading (hydrometer and refractometer) gave us 1.062. (Not that I’m complaining; it was just… surprising.)

We pitched with a double-dose of Belle Saison and watched with satisfaction as the bubbles in the airlock went nuts within 24 hours. I know that the bubbles are a secondary (and weak!) indicator of the fermentation activity but for now it’s what I have to go on. And boy… Did it go.

If I’m to believe the bubbles, this is the most aggressive and vigorous fermentations that we’ve seen yet. It really got going hard and seemed to last quite a while before it trailed off. Once it had settled down for about a week we went ahead and got it racked to secondary, where it had already come down to about 1.009. 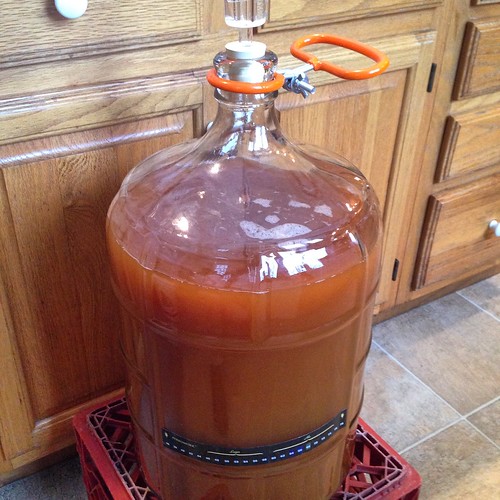 But yeah… two weeks in the carboy, and we settled down nicely to become quite a tasty beer. 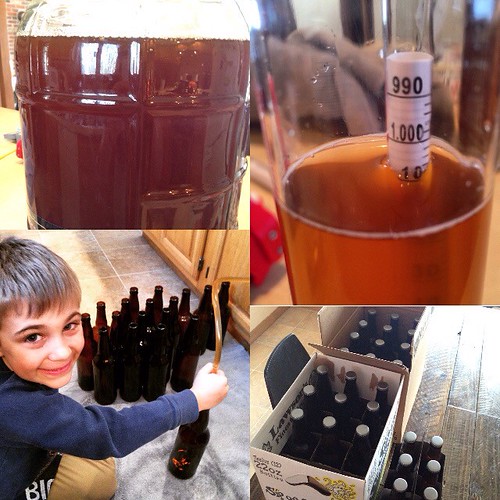 Final gravity was 1.008 which gives us an ABV of about 7.36%. Attenuation was around 87.1%. I slapped a big fat 4.5 rating on this beer when I entered it into Untappd. And maybe that’s just some unbridled enthusiasm, but this turned out really well. Perhaps even better than I expected.