It all started with a Firestone Walker. “What’s that one called?” my oldest asked. I told him. His eyes got all big. “Like Chewbacca? What if we made our own version and called it Let the Wookiee Win?” How could I resist?

I did my research. I looked into Wookey Jack. I looked into Founders Black Rye. I looked at my notes for Fiddlehead’s Black IPA. I didn’t want to copy, but I looked for inspiration. I set my mind to it: not just a black IPA1 but a black rye IPA. And/but/so then with my imagination going, I took a weird little left turn: black rye IPA with saison yeast?

This sounded right up my alley.

Figuring that the grist and hop bills could be sorted out in due course, my first order of business was getting the right yeast. My natural inclination was to use Belle Saison, but I’d also (1) committed to using any given strain only once during 2016 and (2) thought to use that for a rye braggot that I’d been cooking up.2 So that strain was out. I worked through a couple of other saison strains and ultimately settled on Wyeast’s 3711 (“French Saison”) — “extremely attenuative” and “rich mouthfeel” and “very dry finished beer”? Sign me up! And it appeared to be carried by my localest LHBS except for the part where… When I got there, they’d actually sold out of the 3711.

But the proprietor took pity on me and pulled out a package of White Labs WLP566 (“Belgian Saison II”) from his “private stash”.3

But I’m also skipping around on the formulation process here. Let’s back up for a second. Malts: I wanted to see 25% rye, about 6% chocolate malt (mostly) for color, and the rest base malts and extracts. As for hops: Columbus for the main bittering hop, Centennial for double-duty, and Cascade for dry-hopping.

Now where were we? 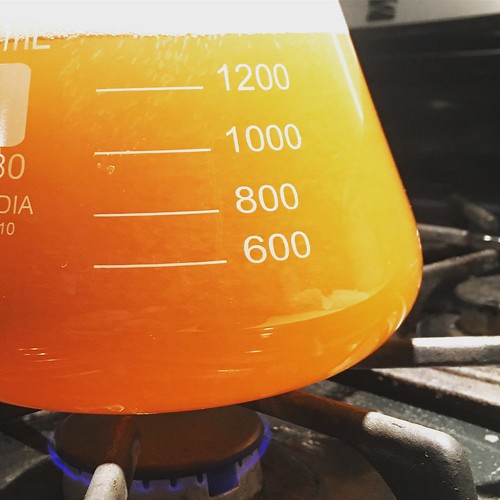 The morning of brew day, I got the strike water going nice and early. I mashed in at about 150°F and did my usual “towel wrap” for 75 minutes. This was followed by a mash-out. 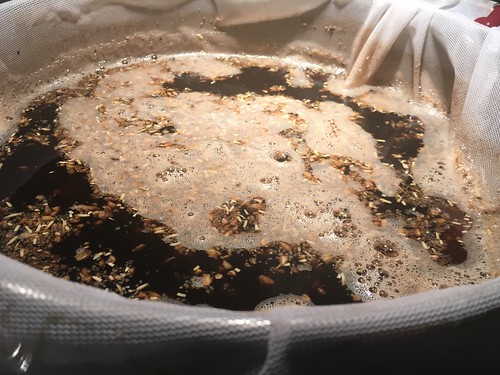 Got my heat going again promptly after those readings and had a nice boil rolling within a few minutes.5 From there I followed my formulation (vide infra) as far as hop schedule and late-addition extract etc. 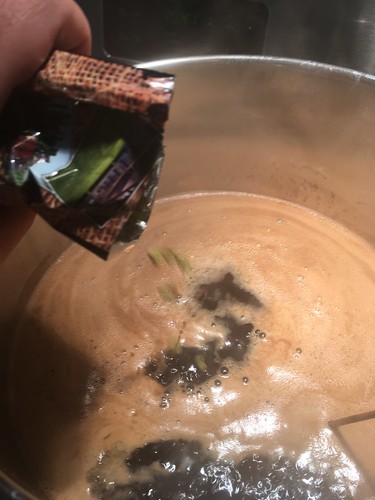 Did my post-boil readings6 and got the wort chilled down to about 80°F or so. I transferred to the fermentor (pre-loaded with the 2 gallons of top-off water) and then eye-balled the remaining top-off.7 After that? Agitate! Agitate! Agitate!

Starting gravity shook out as 1.064 — only two points shy of target. 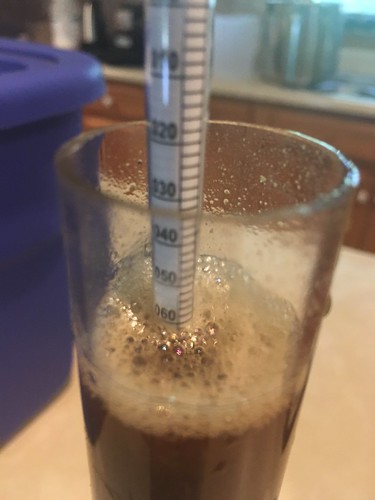 Right on! Pitch and stow it away to let those yeast do their thing

You know? There’s not all that much to tell here. There was some vigorous bubbling by +9 hours; even more vigorous airlock bubbling by +18; a brief temperature scare (“too high!”) at +28; and a sharp (but thereafter steady) drop-off after +42.

I let this go another five days before racking to secondary. Wherein I let it condition for a few days while I ran the numbers on when I would package this beer and thus when to do the dry-hopping.

In any case, a little over a week later, I added the Cascade to dry-hop.

And that’s were things got interesting…

When I first brewed Let the Wookiee Win, I’d intended to bottle it just like I’d done for all my previous homebrews. But a friend had decided to dump a bunch of homebrewing gear, including a kegerator setup. (And this part could be a blog post in and of itself.) 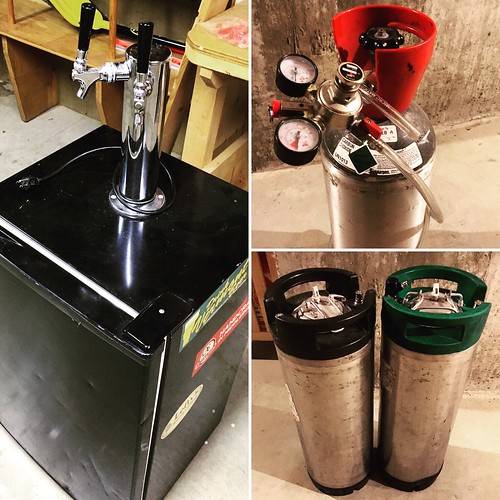 As the saying goes: There’s no time like the present! I got the 20 lb. tank swapped for a full one, cleaned and sanitized the kegs, and racked over to one.

Unfortunately, I managed to screw up something in the initial hook up.

First it didn’t seem like I was getting any gas from the tank into the regulator. Then it just seemed to be a massive rush — way too much gas! So much gas that it was forcing liquid to foam through the keg’s pressure release valve.9 Finally I got the regulator reading at the 12 PSI that I’d determined was appropriate.

But fast-forward two days and I discover that the regulator’s shut-off valve had been in the “off” position that whole time. Not delivering CO2 to the keg. Flipped that to the open position but… there was a constant hissing from the keg. I re-checked the system for leaks and found a couple. Got those fixed. There was still hissing. Noticing that the last leak seemed to be coming from the pressure release valve, I unscrewed it and swapped it for the one on the other keg. It was still hissing. OK…

I sanitized the other keg and siphoned over.10 And that was when I figured out that my problem wasn’t a leaky pressure release valve, but the fact that I’d had it flipped to the “open” position the whole time.

So after all that time I finally got the keg under pressure. But by the next morning, the high-pressure gauge was telling me a sad story. I was out of gas.

Fast-forward two more days and I swapped the tank again. But this time I had a better idea of what I was doing, and I everything hooked up (no leaks!) in no time.

Fast-forward another week or so and while the carbonation still seems… not quite what I want, it is carbonated, and despite patience being the homebrewer’s ultimate virtue &c. — I was getting impatient to start pouring and enjoying. And it’s oh-so-good. The Cascade dry-hopping give it a nice citrusy/floral nose. The chocolate and rye malts complement each other well. It finishes dry, with a spicy note and a pleasantly assertive bitterness. Mouthfeel is silky smooth.

The partial mash recipe for Let the Wookiee Win is as follows.