Given the success of the first batch (second place Saison in the 2018 Greg Noonan Competition), I was determined to dial in my grisette recipe. Taking the feedback from the judges, and a little more speculative process tweaks from Markowski’s book, I applied those here to make Green Mountain Grisette (Mk. II):

The judges’ feedback was positive overall, but highlighted the following areas for improvement:

All three of these seemed actionable. I could achieve a more balanced bitterness by cutting back on the hops — no problem there. Cutting back on the hops might also help to de-emphasize or smooth out the edges on any astringent character left over after also better managing the mash pH management. (Probably. Maybe. I guess.1) As for the malt character… I could change up some of the proportions maybe, but I didn’t want to go crazy with the grist here.

With respect to the malt character, rather than add a bunch of specialty grains, I thought I could better achieve that by using step mash. After all, Markowski talks about that in his book as being traditional.

I got a little bit of a late start that morning, but after sorting out a couple of things (one family schedule-related, the other being some grain mill drama2) I was able to get the strike water going.

Except a moment of distraction meant that I over-shot the original strike temperature. By like 30°F. At first I panicked a little bit. I didn’t want to just wait until the temperature came down — that could be… an hour? Mixing in cold water was an option but that would be more than just a little bit. Then it occurred to me that I still needed to measure out the water for the third infusion (the second infusion’s water was already in a pot on the stove). So I added cold water to the pot until I got down to my strike temperature, ran off water through the port and into a bucket until the kettle volume was down to where it needed to be, and finally mashed in.

Things went more smoothly with the mash after that. Heated the second and third infusions on the stove and then carefully carried them over to the kettle to pour them in. Pulled the bag at the end of the third rest and did the squeezing etc. that goes along with my brew-in-a-bag method. 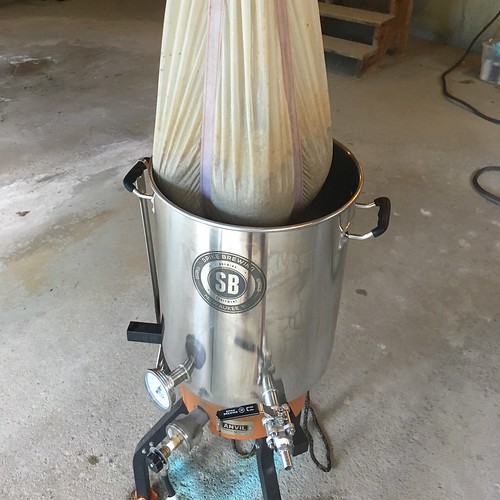 I had exactly 7 gallons in the kettle at about 1.028. This was about 0.15 gallons more than I was supposed to have, but also about -0.005 from the gravity I was supposed to have. I did a little quick math and decided to extend the boil by about 15 minutes. Being a table-strength saison, it would be fine for the grisette to be a little light on gravity.

So I got it to boiling, spent some time to skim off the hot break3, and added the bittering addition of Sterling after that first 15 minutes of vigorous boiling. The rest of the brew day was pretty by-the-numbers, even if I didn’t exactly hit the predicted numbers. 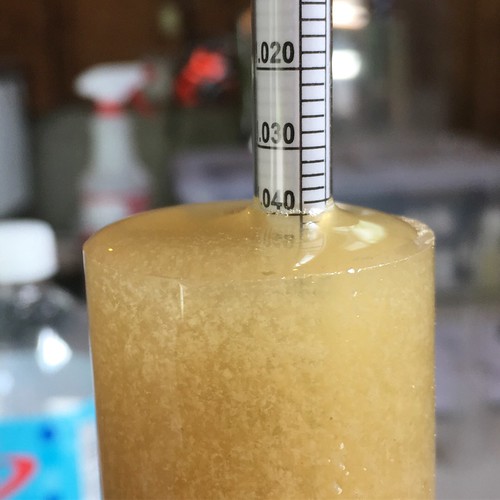 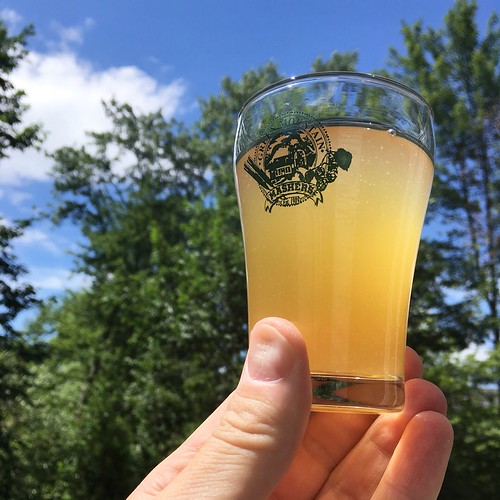 My previous batch of grisette fermented with Wyeast 3711 French Saison, which I really liked and looked forward to using again. Unfortunately, my local HBS was out of that strain when I went shopping. Because I tend to be a just-in-time shopper, and because I’d already planned the brew day, I looked for an alternative. They had a couple of saison strains in the refrigerator, but I ultimately went with White Labs WLP566 Belgian Saison II. I’d used it before and been reasonably satisfied with the results. Descriptions of their fermentation profiles seemed close enough and… well, they’re both apparently var diastaticus strains.4

I over-built a starter to 1050 ml in volume. I pulled 400 ml of the starter as a sample for a future batch and pitched the rest — approximately 650 ml. The wort was 74°F when I pitched and I placed it in my fermentation chamber to chill it the rest of the way down to 68±1°F.

Within a few hours, the activity in the blow-off bucket was ridiculously strong — easily hundreds of bubbles per minute. The krausen was dense and creamy-looking. Certainly by the look of things, fermentation was off to a healthy start.

I removed the heater wrap from the carboy, and reset the ceiling on the controller to 78°F so that the beer could free-rise.

I let it condition a couple more days, then added 3 oz. of Sterling to dry hop for a few days. Then I cold crashed the beer and racked it to a keg.

Woeful Aside About the Kegged Beer

Transferring this beer from the carboy to the keg seemed (at the time) to be pretty routine, and just like all the others in recent memory. After cold crashing, I moved it out of the refrigerator and let any of the disturbed sediment settle back down before siphoning. And yet somehow more than a little of the dry hop matter came over in the siphoning process. Not since my first dry hopping experience have a seen this much hop material come over into the package.

But again… I didn’t know that at the time. At the time it seemed like everything was going normal. The only hiccup seemed to be that I left behind about ¾ gallon of looks-like-drinkable-beer in the carboy because I was trying to keep the tip high enough to stay out of the sediment. I called this a loss rather than try to restart the siphon (again) because I thought everything had gone normally and I didn’t want to mess things up by stirring up the rather thick cake of trub at the bottom. (Also: I planned to send this beer to competition.)

It’s at this point that I seal up the keg, purge the headspace with CO₂, and put it on to burst carbonate. It got 18 hours at 45 PSI and then 8 hours at 50 PSI.5 I partially purged the headspace and reduced the regulator to serving pressure (10 PSI in this case) and… I got a slow trickle of very foamy beer.

Not sure what to make of the situation, I reached out to some friends to ask for advice. They suggested that I…

I did that but… got the same results. This time, rather than ask, I attempted to generalize. Could there be a clog upstream from the liquid-out post? Like maybe the dip-tube?

I would say that this helped, but I had to swap the dip-tube a second time before I started to get anything other than a foamy mass of hop sediment. And even then, I was pouring tiny sample glasses to look for the hop matter for at least 8 more days after that.6

Anyway… Not a total loss. Not a dumper. But extremely frustrating. I guess I can take some comfort in the fact that at least I learned a couple of things.

I’m enjoying it, but it definitely suffered from what I can only assume are process flaws. I think I’ve got a good beer here, but it needs some more tweaking — in part on the ingredient side, in part on the process side — to get it right.

AROMA. Bready, floral, spicy. Malt character is moderately bready, like the inner-most part of a fresh pain paysan. Hops bring a moderate floral note that is a bit fleeting; you catch it and it presents fully, but then it’s gone. The spicy element is harder to pin down — there’s a background grainy-spicy that is probably from the rye and then a moderate foreground peppery-spicy that might be hops or might be yeast-derived phenols. No specific perceptible ester. No perceptible DMS. No perceptible diacetyl.

APPEARANCE. Straw-yellow in color, probably 2-3 SRM. Hazy to the point of being opaque; a permanent haze (i.e., doesn’t clear with warming, so probably proteins). Tall white head with dense foam and a long persistence. Some lacing on the glass. Some pours are marred by distracting bits of hop matter floating at the bottom. (Oh well.)

FLAVOR. Bready and peppery-spicy, with some mid-palate citrus and a retronasal floral note. Malt character is the most dominant aspect, with notes like light-colored bread running throughout. There’s a background graininess that contributes a rustic quality that I think adds to the overall impression, but it’s still lacking in some of the complexity I’m after. Hop character is (again) largely supportive, with some floral-over-herbal-spicy contributions that mostly present themselves mid-palate and retronasally. I get a citrusy component (Meyer lemon?) as well, which was absent in the aroma; I suspect this is an ester contribution. There are peppery-spicy notes as well, especially in the back of the mouth; I attribute these to desirable phenols, though some of it may be from the rye. It’s more balanced than the previous batch, with an assertive (but moderate) bitterness that lingers appreciably (but not over-long).

MOUTHFEEL. On the light side of medium. Moderately assertive bite from medium-high carbonation. No discernible alcohol. No creaminess. If there’s astringency… I’m not picking it up.7 And then there’s the attenuation… it’s decidedly a dry beer, but it could be a little more crisp, a little more attenuated.

OVERALL IMPRESSION. A decent, though flawed grisette. Light and refreshing, but a little… well, if not one-dimensional then two-dimensional. Hop choices and balance seem right. Malts need the most work; what’s there isn’t bad or wrong but could use “something else” to bring that out. The big wild card for me is which yeast was the better one for this beer. Given that I changed up the rye/wheat proportions and knocked the hops back, it’s not exactly the same beer so it’s not an apples-to-apples comparison but… it’s my opinion that these different yeasts give different characters.

So given all that… changes for next time?

The all-grain BIAB recipe for Green Mountain Grisette (Mk. II) is as follows: