As a variation on a saison, grisette was a style that I instantly fell in love with. Almost immediately afterward I started poking around, plotting how to make one of my own. And after about a year and a half of research and planning, I pulled the trigger on a batch which (for reasons I will explain later) I decided to split. Thus did it become Grisette Deux Façons1 — with Traditionnelle and Moderne takes.

Ever since my first taste, the saison — that Belgian-heritage farmhouse-style ale — has intrigued me. They are recognizably beer, but they don’t fit comfortably into predictable little boxes. There are so many interpretations of saison — from pale and lightly peppery table beers to dark and truly funky super-strength monsters, and (of course) every variation in between. For me, the main quality that unites the diverse family of farmhouse ales is that they must have some kind of peppery yeast character.

So when I had my first grisette (Oxbow’s Loretta) in June of 2016, it was like a revelation. That spicy-peppery yeast character on full display, tap dancing across that lightly grainy-nutty character imparted from the spelt — and at 4% it was something you could drink all afternoon. I wanted to make one.

But before I could commit myself, I needed first to answer the question: What made a grisette different from a saison?

This proved to be a tricky question to answer. Early research turned up forum discussions on BeerAdvocate and reddit, as well as a number of posts on homebrewing blogs, that did little to clarify the issue. The common themes were (1) a high proportion of wheat and (2) low ABV; otherwise commentary seemed to pull in lots of different directions. Pale vs. amber. French saison yeast vs. mixed fermentation. These sorts of disagreements weren’t surprising but they didn’t help.

I started to notice that many of these discussions referenced Markowski’s 2014 book, so I tracked down a copy of that. Except, Markowski only makes a fleeting reference to the style — which was the same (brief) quote I’d already seen.2 Ultimately, the style choices I made were influenced by this article in Draft Magazine and Gordon Strong’s style profile that appeared in BYO.3

At the end of the day, the grisette definition I settled on would go like this:

In other words: a table-strength saison with a bunch of wheat.

And with that, I worked out a formulation which… sat for a few months. I had every intention of brewing it but 2017 otherwise took on a life of its own.

But then Make the Cut Year 4 was announced and I had a feeling that this was the time to brew this beer.

About That Split Batch

As I started plotting out all the logistics for this beer, I hit a wrinkle in the form of inspiration. I had a Mosaic dry hopped Free Rise from Trillium which set off all kinds of mental alarm bells and conjured up memories of similar beers (looking at you, Surfing Waves of Dopamine, and you E.). It seemed that you could make a farmhouse-style beer that featured modern American and New World hops with all their big audacious aromas and flavors. But… I wanted both!

I puzzled this out and arrived at the only sensible conclusion: split the batch. I went back to the formulation, tweaked it such that I could produce 6 gallons of wort instead of 5, and figured out a low-complexity way to split them on brew day.

Feeling smugly satisfied, I pulled the trigger on this one.

About a day or so ahead of time, I made a starter for the yeast. Nothing extravagant, just 1 liter of wort to give the two packs of 3711 a head start for when they were pitched. (Meanwhile, I enjoyed some Honestatis.)

The night before brewing was to commence, I got my liquor together. Then that morning, bright and early, I put flame to it, mashing in at 151.1°F (which was a degree or two over the target but sure OK let’s run with it…) 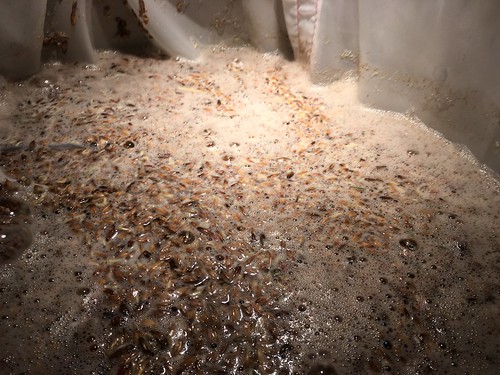 While the grist mashed for 90 minutes, I did some additional prep and mise en place. When the mash finished, I pulled the bag, let it drain atop the grill,4 and did my squeezing. My post-mash/pre-boil gravity was looking like 1.030 — which was about 5 points off where I expected it to be, but still in-band for the style.5 Given that, I opted to proceed straight to the boil rather than trying to fuss with it. 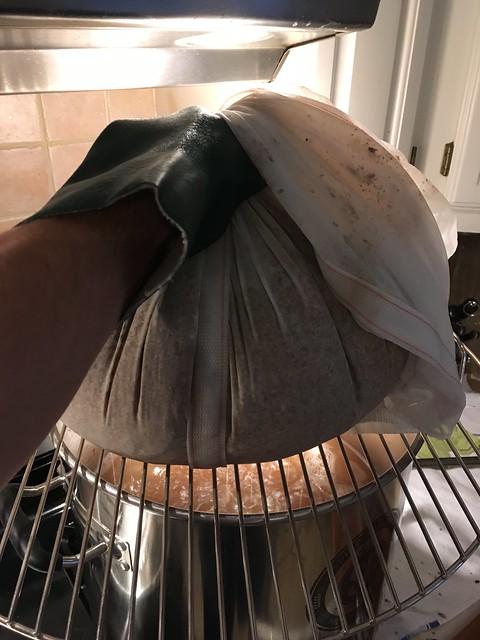 The boil proceeded. Sterling hops were added. In the meantime, I prepared the gear I would need for after the boil. Which, when the boil completed, I chilled it as quickly as I could down to 140°F. It’s at this point that the split happens…

I opened the valve on the kettle and ran off about 3 gallons of wort into a second kettle, where one ounce each of Mosaic and Galaxy were waiting. That wort was then set aside to steep on those hops for at least fifteen minutes while I chilled the rest of the wort down to 68°F for pitching; once it reached that temperature, I ran it off into a carboy. At this point, and with sufficient time elapsed on the Moderne half, I moved over the wort chiller and finished chilling it to pitching temperatures.

Needless to say, things were a little intense in the kitchen that day. 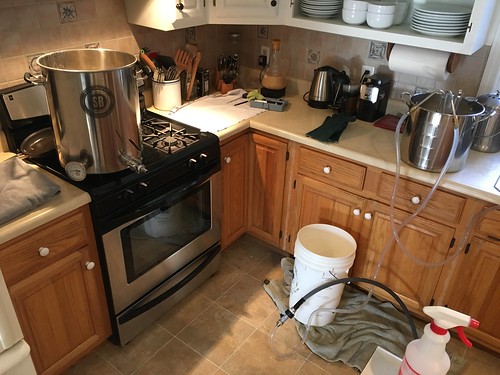 With both splits in their respective carboys, I took gravity readings. Traditionnelle came up as 1.035; Moderne came up as 1.037. (Seemed fair to record each as unique, but all together it likely would have measured 1.036.)

With the numbers recorded, and the worts at the right temperatures, I pitched approximately 600 mL of 3711 starter into each and put them side-by-side in my fermentation chamber at 72±1°F. 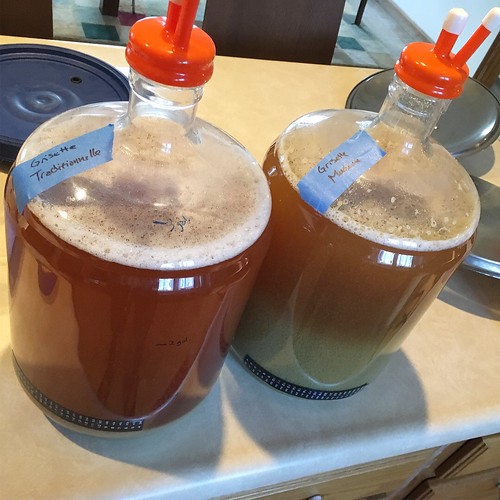 It was bubbling with fair vigor by +5 hours post-pitch, and by +18 things got rather intense in the blow-off bucket. 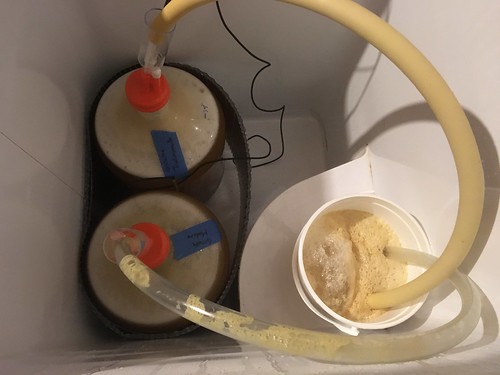 By +29 things were already starting to slow down, so I bumped the temperature on the controller by a degree. Then again at +48. And again +67. At +91 I took my first gravity reading (1.008 for Traditionnelle, 1.009 for Moderne, added some yeast energizer, and bumped up the temperature again. By +138, I had the temperature up to 80±1°F.

A week after pitching, I’m taking the second gravity reading: 1.005 for Traditionnelle and 1.007 for Moderne. Two days later, gravities are down to 1.004 and 1.007, respectively. Commence dry hopping. (Three days.) Cold crashing. (Two days.) And packaging. (Bottled up the whole batch, primed with corn sugar.)

Then we wait for the bottle conditioning to make with the carbonation.

It was truly enlightening to see just how different both of these beers turned out, while still being recognizably of the same lineage. I definitely got what I was going for in both cases, though I’d say that the more traditional preparation was a bigger success than the “modern” take. 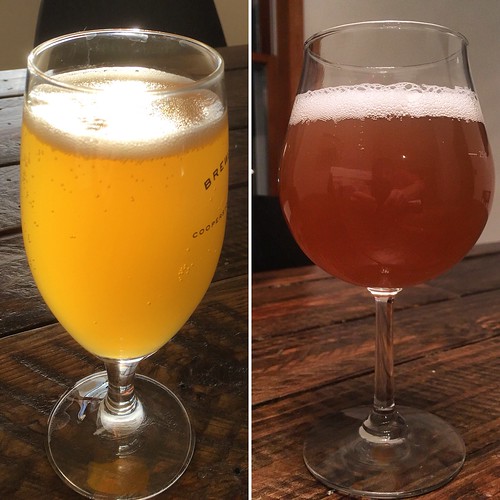 (Side note: Moderne isn’t really that much darker; it’s just a trick of the light in the photograph. Oh well.)

OVERALL IMPRESSION. Excellent table-strength saison with prominent display of wheat and rye character grains. Expected more yeast expression, though it wasn’t necessarily lacking. While the body was far from dextrinous, I wonder if a change to the mash schedule could boost fermentability and get the finishing gravity even lower and drier.

AROMA. Tropical aromas lead: pineapple (moderately high) and mango (moderate) with melon (moderate); those are accompanied by a low citrus (clementine) and apricot. All of that is hop-derived. There is also a moderately strong peppery phenol from the yeast character. Hop- and yeast-derived characteristics are an interesting contrast; they don’t exactly clash but I could see this being a bit much for some noses. Malt aromas largely low to moderate — light bread and cracker, some grainy aspects.

OVERALL IMPRESSION. A table-strength saison treated with a variety of New World hops. (But I knew that already…) Could play well-enough as a session Belgian IPA. Intense aromas are pleasing; peppery yeast character is an interesting contrast. Body seems like it could be lighter. It’s not a hot mess, but there’s a lot going on.

Brief Interlude to Get Feedback

One of these two was going to get entered into Make the Cut. The question before me was… which one? I enjoyed them both but I’m coming at this with strong biases. Which one would be more likely to compete well? I was leaning toward the Moderne take, but… was the just my wishful thinking?

I brought one of each to one of our BJCP study groups and asked my peers there for feedback. That feedback was tremendously helpful. To paraphrase and summarize: “Moderne has a lot going on and we don’t hate it, but it’s like it doesn’t know what it wants to be; Traditionnelle on the other hand is a case study in less-is-more, and it has a very clear story that it wants to tell your palate.”

That was enough for me, and I set aside 6 bottles of Traditionnelle for the up-coming Make the Cut competition drop-offs.

Changes for Next Time?

While I was happy with how both versions from the split batch turned out, there are some tweaks that I’d make going forward.

The Traditionnelle treatment is pretty close to exactly what I wanted. I would consider bumping up the O.G. just a touch — granted that’s also because I was shooting for 1.040 to begin with. I would also look at my mash schedule, and consider a step mash or something else that might help to encourage a more fermentable wort — 1.004 is pretty dry but I wonder if I could get it to 1.002? I’d also consider just slightly more carbonation, but I feel like that might also run the risk of over-carbonating.

As for Moderne — I feel like there has got to be a way to get this into balance. Some of the feedback from my BJCP study group peers was that it might be over-hopped (especially over-dry hopped) given the otherwise low ABV. This one is hard to accept because, especially with the super-fresh bottles, the intense aromas were pleasing and desirable. I would also re-consider exactly which hops go into the whirlpool and/or dry hopping for this one. The interplay of the yeast character and the hop character can work, but maybe it’s just not this specific combination? And of course, I’d like to nail the gravities here as well. 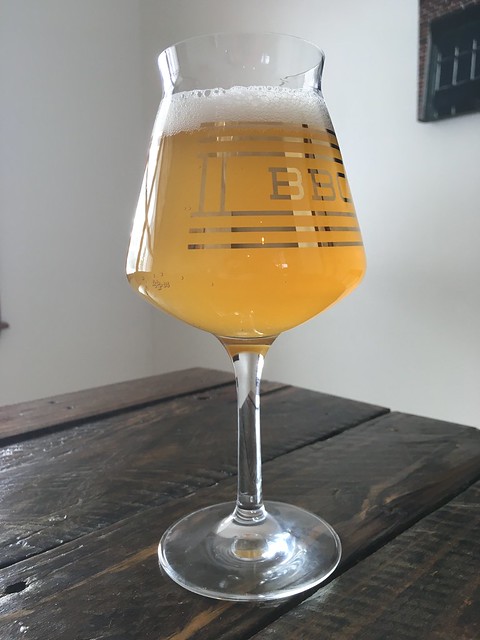 Despite those bits of critique, I am pleased with how this split batch turned out. I’ll definitely be making this again. This will be a nice one to have around in the spring and summer. I think it also might be fun to play around with a fruited version.

(P.S. despite my best hopes, Traditionnelle did not advance to the second round; oh well, next time &c.)

The all-grain (BIAB) recipe for Grisette Deux Façons is as follows:

Summarized on this Bru’n Water spreadsheet.