Some beers start with a target style. Others with an imagined flavor profile. Perhaps it’s born of ingredients already on-hand. And sometimes your four year old son gives you a name that just begs to be a beer; that beer is Teddy Bear’s Mind: 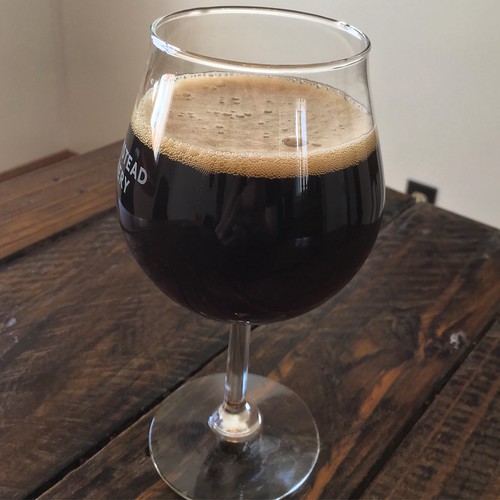 The inspiration here goes all the way back to September 2016. My younger son (E., and four years old at the time) was taking a bath. I poked my head in to check on him and when he saw me, he offered up a cup full of bathwater. “Do you want some beer?” Sure, I joked, what’s it called? “Teddy Bear’s Mind.”

I knew at once this needed to be a thing.

A dark beer (perhaps a porter?) — dark like a brown or black bear. It would need honey. (Bear’s love honey). They live in the forest, so there would need to be a wood character. (Maple, of course. This is Vermont, after all.) And could I sneak in a blueberry impression somehow…? (A clap-back to Blueberries for Sal.) I noodled on this idea for several months. By the end of July, I had some wood soaking in locally distilled bourbon, knowing I’d have some time to make adjustments to the formulation. 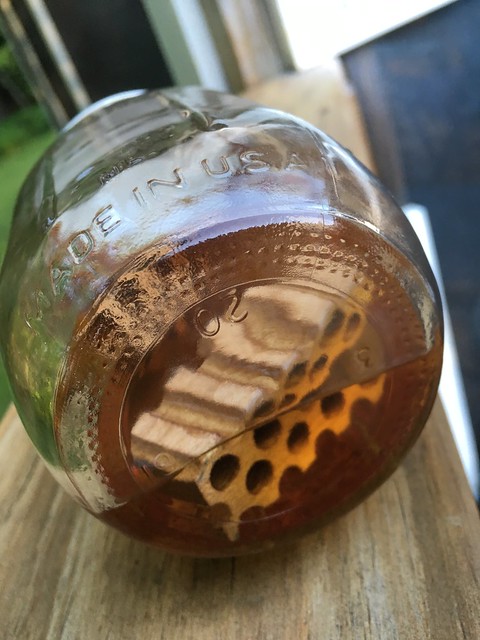 Come December 2017, it was time to brew this long-awaited and much-ruminated ale. With my grist milled and my water adjusted, I mashed in at 152.9°F and did my best to hold it there for 75 minutes. After pulling the bag and squeezing, I had about 5.8 gallons at 1.049. 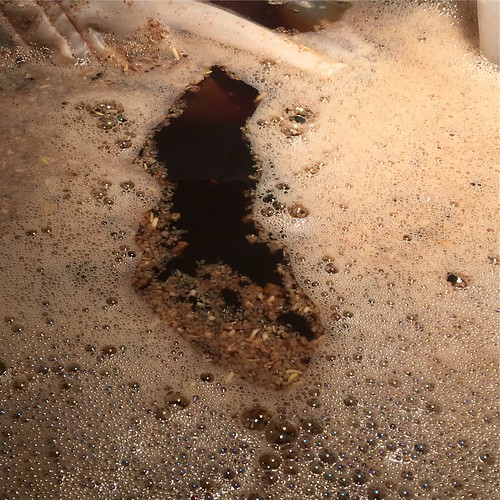 I boiled for 60 minutes, adding Willamette at 60 and 30 and flame-out. Meanwhile, it was quite the busy homebrewery day, bottling my grisette and pitching yeast for my passionfruit melomel. 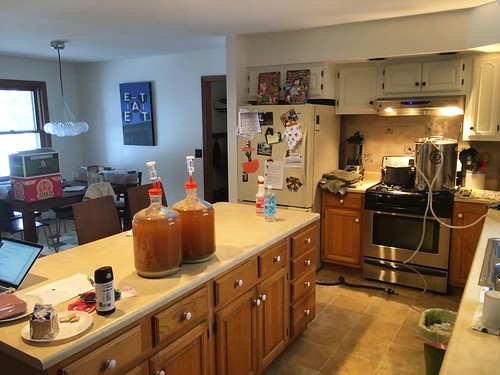 Almost exactly 5 gallons went into the carboy. After temperature calibration and offset adjustments, the starting gravity was 1.059. 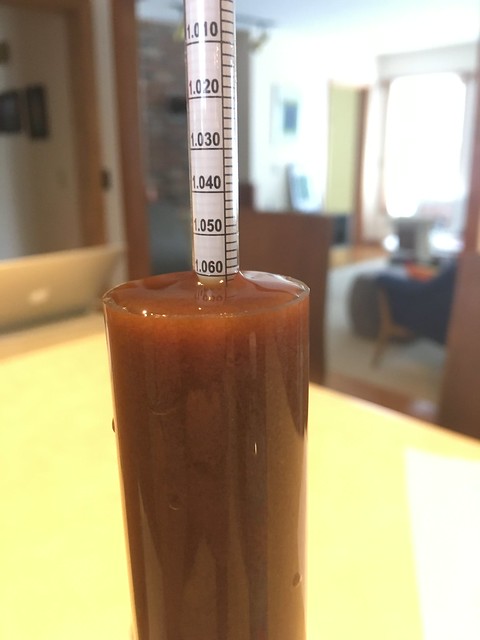 I aerated, pitched some 1098 British Ale from the starter, and got it into the fermentation chamber at 65±1°F.

Active fermentation was underway in just a few short hours, and by +19 it was quite vigorous. The temperature controller kept it holding steady throughout and at +69 hours, I added 3 lb. of honey.

It was fun to see the airlock activity kick back up again after that.

After two weeks, the gravity appeared to have stabilized at 1.011 and it was time to move on to the next phase. I placed the wood (along with about 150 mL of the bourbon it had been soaking in) into a sanitized carboy and racked off the yeast cake. I set it up in a corner of the basement and covered it with a black t-shirt; I needed to forget about this one for at least 30 days. 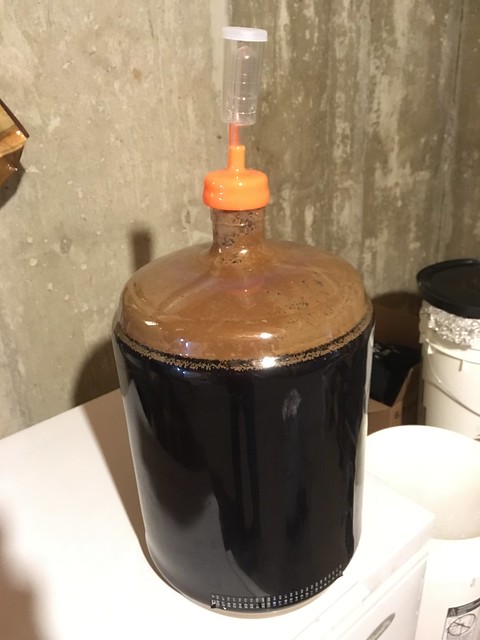 While cleaning out the primary carboy, I noticed something unusual about the trub and yeast cake. It was oddly… clumpy? I couldn’t recall having seen anything like that in any of my previous batches. My hunch was that the clumps were some of the honey, that not all of it went into solution, and even after 11 days, the yeast hadn’t fermented it all.1 In light of that suspicion, I got it into my head that I should send a sample off to Zymology Labs and let science do the talking.

In the meantime, I tried to sit tight and let the beer and the wood and the bourbon do their blending and melding and all that good alchemy.

But of course in homebrewer fashion, I got impatient and after two weeks figured I would pull a quick test. Just to see. Just to satisfy my curiosity.

So far so good, but a ways to go. I wasn’t exactly sure what kind of character the maple wood was supposed to impart, but I was getting the beginning of that woody tannic quality. The bourbon was there but it was subtle.2 But now I was casting doubts on my base style. The sample wasn’t reading like a porter to me; it was lacking that “lightly burnt” perception that the BJCP style guide mentions a few times. But if not a porter, then what? (Perhaps if I recruit some outside help…?)

When I got to 30 days, I drew another sample, this time to evaluate both gravity and flavor. To my surprise, the gravity had come down to 1.008. As for the taste of it: the wood flavor was stronger, as was the bourbon, and I was still undecided on the base style. “Let’s see what another two weeks does,” I said to myself.

Fast-forward those two weeks and I pulled yet another sample. The gravity had held steady at 1.008, and as far as the flavor profile went, I couldn’t detect any significant differences from the previous taste. It seemed to me that the beer was ready for the dry hopping I had planned.

I also liked it the way it was. Could I have it both ways?

Yes, I absolutely could have it both ways.

The rest I ran off into a 3 gallon carboy pre-loaded with 1 oz. of Simcoe Cryo Hops. 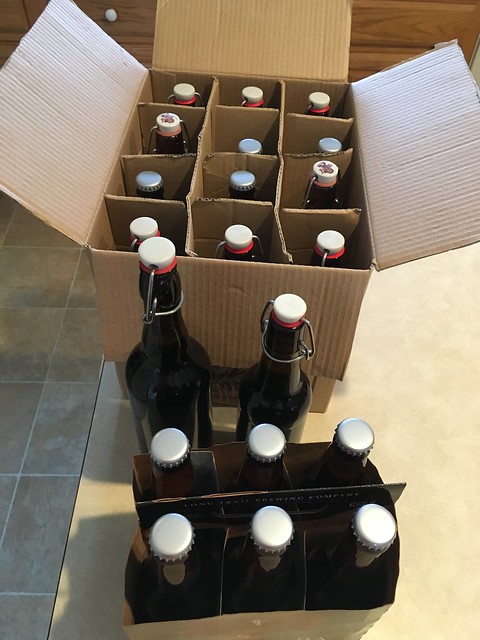 And while I was at it, I grabbed a sample to ship off to Zymology Labs for ABV testing. 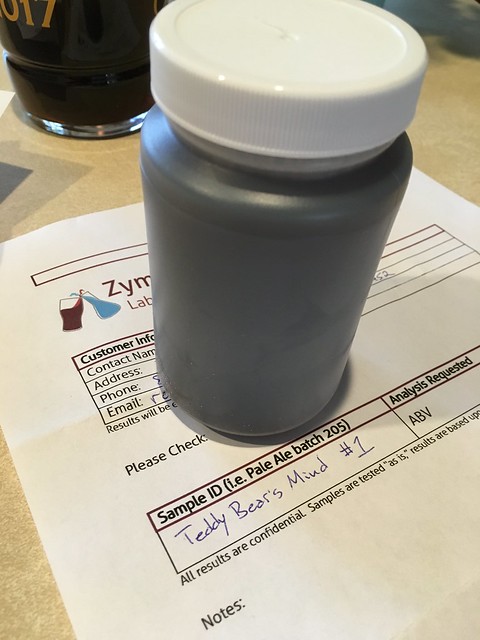 Now to let those bottles condition…3

AROMA. Leads with notes of honey, cocoa, and berry. Malt aromas are moderately strong, again with the cocoa and honey, but also toffee and a bit of toast. Hop aromas are fairly low and evoke an earthy and floral impression. The berry note could be a bit of ester or from the dry hopping (in that version). Alcohol impression is very mild but perceptible. Any wood is just above threshold and fleeting.

FLAVOR. Leads with pronounced malt flavors — cocoa and chocolate, toffee, honey, a hearty bread lightly toasted, even a little graham cracker. There’s a bit of caramel, but it’s mostly mid-palate and light. Hop flavors are mostly floral and earth background notes. Medium bitterness; balances toward a bitter finish though there is plenty of assertive malt character to round it out. The fermentation profile is clean overall; that same ester in the aroma is here as a subtle cherry or blackberry note. (Again: the blackberry impression might also be coming from the dry hopping in that version.) A moderate honey impression flirts and co-mingles throughout. Some alcohol character, though not necessarily a distinct bourbon impression. Any wood is modest, presenting as a subtle tannic quality — that said, aftertaste evokes wood (though softly) and toasted bread. Slight vinous character as it warms.

MOUTHFEEL. Medium body, moderate carbonation. Creaminess is present but not distinct. Very mild astringency, presumably from the tannins in the wood. Pleasantly mild warming from alcohol.

OVERALL IMPRESSION. Multiple layers to this beer; arguably complex. There’s a lot going on here, but it manages to not be a hot mess. I don’t feel like any of the flavors are necessarily clashing with one another, but it’s also difficult to decide if there’s any one flavor that defines the profile overall. Giving myself feedback on this one will be difficult; on the one hand, it isn’t the beer I imagined but on the other, I’m enjoying the results that I did get. To my senses, it isn’t flawed in any specific way, and while it’s an enjoyable beer… it’s hard to find its nucleus. Perhaps I did this backwards and I should have perfected the base beer first…? 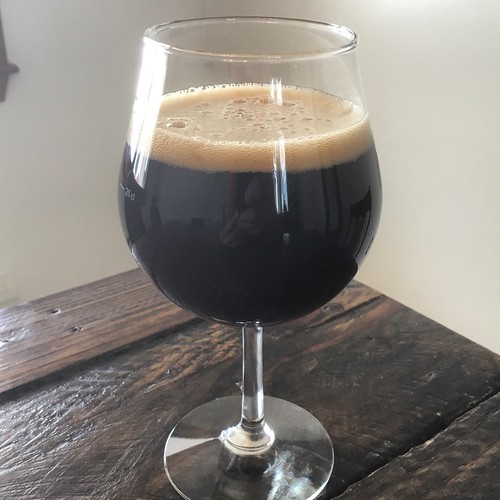 So what would I change?

First, the choice of maple for the wood aging here was based on novelty — to round out the concept. That said, the concept didn’t map onto the best beer this could be. Perhaps maple doesn’t impart that much character on its own?4 Perhaps oak next time? Perhaps let it sit even longer on the wood? Perhaps break the wood down further for even more surface area?

And on that note, while I think the wood itself soaked up enough bourbon, I’d even consider adding more into the conditioning beer. I don’t want an over-the-top bourbon character, but I could see bumping up the intensity.

As far as the honey goes, I think a process change and allowing it to sit a little longer on the primary yeast cake would get some better results. I would still add it mid-fermentation, but I think I would heat it up first. I also think I would attempt to stir it (gently!) into solution with a (sanitized!) stainless steel spoon. I would need to ferment in something with a much bigger opening though… (Stainless steel brew bucket, anyone!?) I should also know from my mead making experiments that I should give the yeast more of a chance to finish off the sugars in the honey. In other words, I think I racked off prematurely.

The jury is out with respect to whether the dry hopping made a big difference here or not. It seems to me like it… didn’t? Not no difference but perhaps with so much already going on, the aromatics provided by the dry hopping gets… “lost” isn’t the right word, but it’s the first word that comes to mind.

And then of course there’s the question of the base style. I think it works well as-is, but I’d intended it to be more of a porter. For that, some black or (more) chocolate malt would help bring about those characteristic “almost burnt” flavors. For competition purposes, it seems to occupy a space adjacent to an American Brown Ale — though stronger and drier — while at the same time not quite fitting in as an American Strong Ale nor a Barleywine nor a Stout (Imperial or otherwise). Is Double Brown Ale a thing? Perhaps veering off the American styles and trying it as an on-the-dark-side British Strong Ale? Aspects of it seem to flirt with a few different styles but it doesn’t seem to neatly land in any of them.

That said (“last but not least”) brewing the base style by itself — no honey, no aging-on-wood — would be a good idea. Perfect that, then play around with the additional layers.

Despite that lengthy critique, I must reiterate that I’m satisfied with the results. While not what I originally envisioned, it’s still pleasing. Both versions turned out nicely and I’m curious what remarks will come back from competition.

The all-grain (BIAB) recipe for Teddy Bear’s Mind is as follows:

Starting with the Champlain Water District profile as a base, modifying to meet “Black Balanced” in this Bru’n Water spreadsheet:

A few months in advance, soak the hard maple honeycombs in the bourbon.