When I first brewed this beer, I wrote that it “was me trying to play my hand at the IPA game”. I took a less-is-more approach: super-simple grist (just some Briess Pale Ale malt and the golden light DME to make up the difference on my partial mash), all Galaxy everywhere, and a healthy pitch of Wyeast 1332.1 Needless to say, I was delighted when it brought home a surprise Third Place Ribbon in the 2016 Greg Noonan Memorial Homebrew Competition. With a few ounces of Galaxy “left over” from that Grisette Moderne, it was time to reprise Tilde Galaxy (Mk. II): 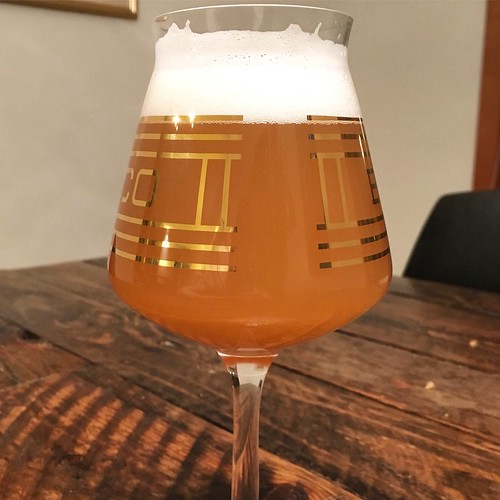 With my system recently “upgraded” to all-grain BIAB2 with that 10 gallon Spike kettle, this beer’s formulation was set to to follow suit. I looked up the constituents of the Briess golden light DME, worked those in alongside the Pale Ale malt, and made some slight adjustments based for gravity and balance. We were off to the races!

I mashed in at 149.6°F and let it rest for 90 minutes. Meanwhile, I bottled Prosody (Mosaic) — in part because it was ready, but mostly because I needed to free up that particular carboy.3 My pH reading came in at 5.12.4 When the mash was over and I’d finished squeezing the bag, I had approximately 5.8 gallons of 1.058 wort. 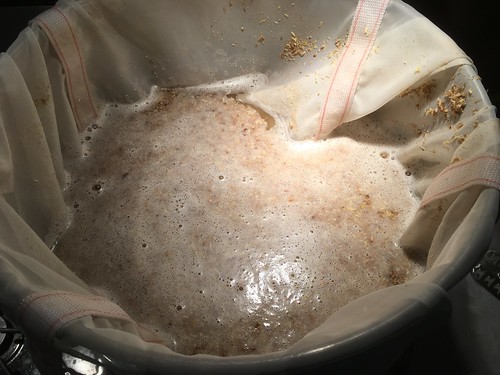 I set the wort to boiling and followed along with my hop schedule — one that was simplified from the last time around. I also added in about 8 oz. of table sugar as a 15 minute late addition. At flame-out, I got to chilling and had it down to 65°F after about 15 minutes. I ran off about 5.1 gallons of wort into the carboy. 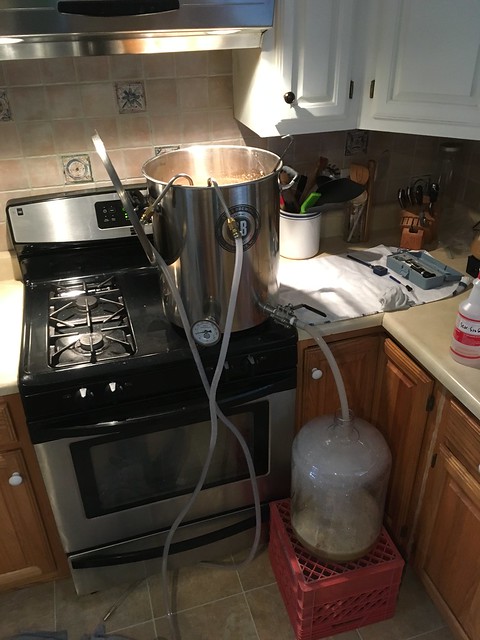 With temperature calibration and offset adjustments, my original gravity was 1.071 — just one point shy of my target. This was (“of course”) scaled back a couple of points from the original batch’s original gravity, to address some of the feedback that had come home from the judges. 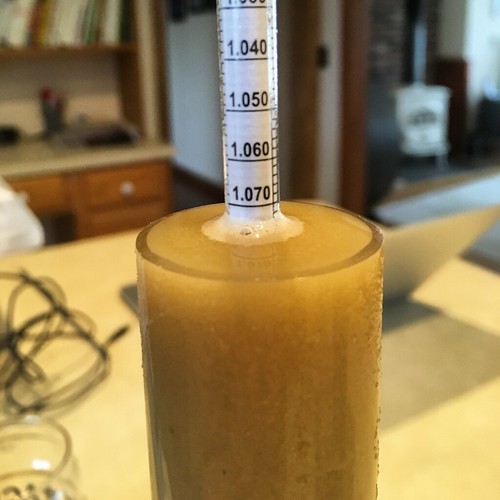 Two packs of 1332 had been building up on a 1000 mL starter since the day before, and I pitched those when the wort was at 62.7°F. I got the carboy into the fermentation chamber and set the temperature controller to 66±1°F — trying to lock it in at the temperature I had recorded from the first batch (long before the days of my fermentation chamber). Within 3 hours, I saw bubbles in the blow-off bucket; within 20 hours, those bubbles were vigorous. (Here it is at +22.)

The vigor started to decline around +30 hours, and by +80 it had slowed to the point where I started ramping the temperature (+1°F at a time) to encourage complete attenuation. These slow (but steady over 12 hour intervals) bumps in temperature up to 70±1°F seemed to sustain that vigor. By the time I took the first gravity reading (+246) it was down to 1.012 (with calibration etc.) — which would turn out to be the final gravity a few days later. 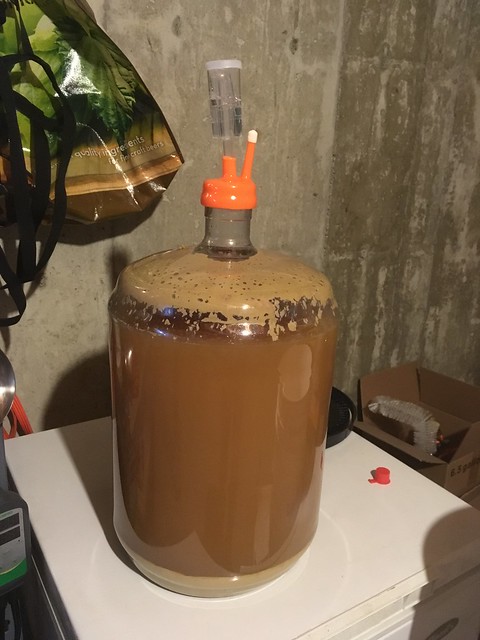 Satisfied that I had the beer at F.G., I added 3 oz. Galaxy to dry hop over four days.5 Afterward, I opted to skip the cold crash (like with the original6) and package immediately. I bottled 4 × 12 oz. bottles (1 to test, 3 for comp) and kegged the rest. The keg went onto gas more/less immediately — 28 PSI for 24 hours, sampled; 24 PSI for 24 hours more.

I’m having a hard time remembering exactly what the original batch was like but… this one is hitting the spot for me. 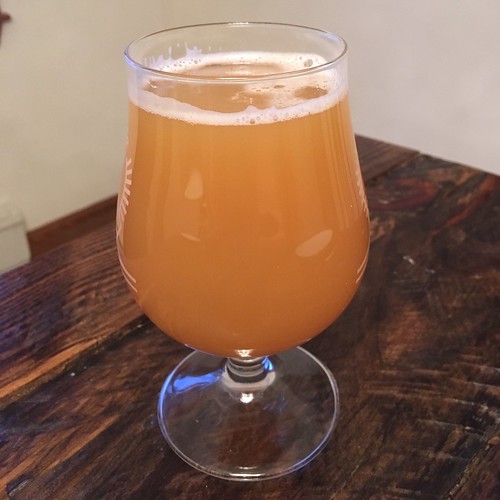 AROMA. Hop notes lead: stonefruits (peach and apricot) ahead of tropical fruits (pineapple and mango) ahead of citrus (mostly ruby grapefruit); fairly strong, all of them. Malt aromas are largely neutral and low intensity. If there are significant esters they are similar to the hop aromas and as such co-mingle. Mild alcohol. No diacetyl. No DMS.

APPEARANCE. Depending on the light, pale or burnished gold color. Hazy.7 Over an inch of foamy white head; decent retention.

FLAVOR. Malt backbone presents with a light cracker aspect of low/moderate intensity. Otherwise hop-forward, with flavors following the aromas — stonefruit (especially peach) and tropical fruit (especially pineapple) though citrusy elements are more subdued on the palate vs. in the nose. I get some alcohol, but it’s moderate. Assertive bitterness but not aggressive. Finishes dry. Aftertaste has a sweetness element that calls back to the fruity hop character. Again: any flavor contributions from esters seem synergistic with those of the hops. Otherwise finishes dry.

OVERALL IMPRESSION. Recognizable DIPA with a fruity character and just enough alcohol to remind you that its smoothness is just a trick.

It’s not a perfect beer. While I wouldn’t call it a dirty or problematic fermentation, I also wonder if it could have been more “clean”. While I managed to keep the temperatures pretty well within the lower end of the strain’s band during the more active part of fermentation… Or if it wasn’t the fermentation temperature, could it have been the fact that I added the ½ lb. of white sugar? Somehow I’m skeptical of both but (but) some recent judge feedback about fermentation byproducts has me paranoid in this regard.

Also — and I’m playing a dangerous game here but… — I would liked to have seen slightly more intensity on the hop-derived aroma and flavor contributions. This is me flirting with the extreme edges here. The feedback I’ve gotten so far from people I’ve shared this one with has been that it has pretty strong aroma/flavor qualities. But maybe I’m hitting a threshold for “casual drinkers” that for me needs… amplifying. (Or maybe this is a lesson about my own perceptual aspects?)

All in all though, I’m happy with how this turned out. I wonder if some of the differences from batch #1 (i.e., the intensity characteristic) is attributable to hop terroir between the harvest going into 2016 and the one going into 2018. Assuredly some of the differences are likely attributable to partial mash vs. all-grain recipes. Regardless, I keep pouring because I’m enjoying. And now to send those three bottles to competition to see if I can one-up my last attempt…

The all-grain (BIAB) recipe for Tilde Galaxy (Mk. II) is as follows:

Starting with the Champlain Water District profile as a base, and targeting the Yellow Dry profile (Bru’n Water spreadsheet):