Tilde Galaxy was me trying to play my hand at the IPA game. I had one IPA under my belt, but it wasn’t a house original, and I wasn’t totally satisfied with it. (But mostly because it wasn’t 100% mine.)

I’d been digging New World hops lately, and Galaxy in particular. (Looking at you Double Galaxy; looking at you Lost Galaxy.) I’d been toying with the idea of doing a SMASH beer or (given that I’m mostly doing partial mash these days) at least something “SMASH-esque”. I worked out a recipe that I thought might work and went for it. I wanted something that:

Happy with where the formulation landed, I lined up my ingredients and set a date.

Which is where things turned improvisational.

My folks visited over President’s Day weekend, and I’d originally planned to brew Tilde Galaxy the following weekend. However, with the temperatures in the single (negative) digits, and with frostbite warnings up at the mountain, my dad decided to dump our Sunday ski plans in favor of preventing his hands from being in the single digits. “Got anything lined up that we could brew?” he asked. And it just so happened that I had everything.

Everything that is, except the cell count. Since I was a week away from my scheduled brew date, I only had my single smack pack of 1332. But never fear! we made a quick run to the local HBS and grabbed another pack or two to reassure ourselves that our pitching rate would be suitable for the 1.074 target gravity. And smack those upon arriving home and set them in a nice bowl of warm water to… encourage them: 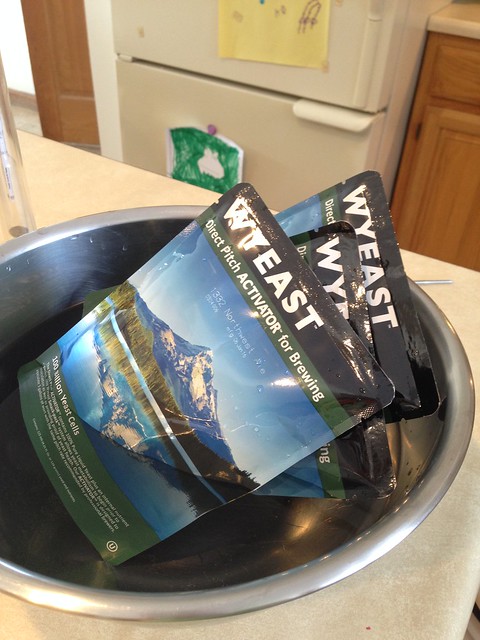 And while we’re at it with the prep work, let’s take our giant 8 oz. bag of Galaxy hop pellets and portion them out for the hop additions, mise en place style: 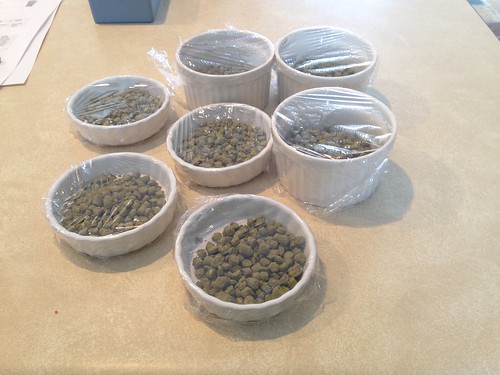 A Side Note About Partial Mash

A little shaken after the Boo Beer episode, I was trying to pay extra special attention to my mash steps. Given that only Boo Beer has (so far) been “way off” (20 points) — I assumed it didn’t have much (anything?) to do with my water, and have tried to focus on the mashing procedure itself.

The majority opinions that I’d gotten when seeking advice were:

So I did this and… well, it seemed to work. My pre-boil gravity wasn’t quite where BeerSmith said it should be but… so far so good? And/but/so I’m wondering if I’m not quite hitting the pre-boil gravity because I’m not “faux sparging”? Allow me to explain:

Still something of a novice at mashing, and having never done an all-grain brew before, I’m only aware of sparging “in theory”. My understanding is that you’re basically rinsing the grains with warm water to draw off the remaining sugars that are bound up in there. Now, with a partial mash BIAB this is cumbersome. You’ve got this heavy-as-hell mesh bag with a few pounds of water-logged grains in them. You can’t reasonably hold it over the kettle (if you’re a single-vessel BIAB brewer like I am); holding it up for any length of time is taxing, and trying to hold it up and gently pour warm water over it is nearly impossible. So… this is certainly an explanation for why I’m not getting efficiencies that are anywhere close to 70%.

That being said, I also have not been content to just pull the bag out, let it come to a slow drip and discard it. I tend to also squeeze the bag to extract what usually winds up being a few more cups worth of wort. (I’ve never measured it, but I suspect it gets close to a quart when all is said and done.)

That being said, I also learned a valuable lesson about my equipment this time around: the colander I’ve been using for this will happily tumble into the kettle, causing an arm-burning splash and a sticky mess in the immediate vicinity. Don’t let this happen to you.

Onward to the Boil

Brewing this IPA was a pretty special occasion for me. For reasons I won’t get into here, my dad abstains from fermented beverages. Having a good relationship with my dad, I’ve wanted to share this new passion/hobby with him but that has been (needless to say?) difficult since typically when I share that hobby, I’m sharing the output.4 Having said that, it made me very happy that my dad wanted to engage in the brewing process with me, and to see what all my fuss was about. 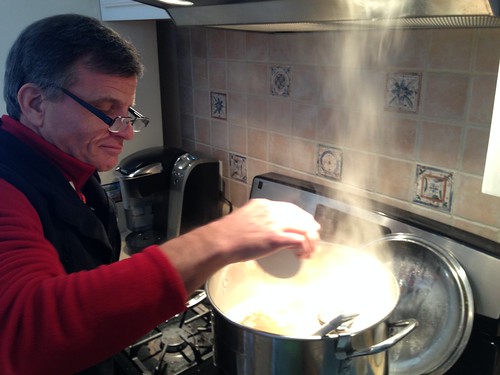 While my usual Hop Master was off playing, my dad filled in on the hop additions (at 75, 60, 45, 30, 15, 10, and flame-out). Between hop additions, we flipped through the Yeast book and we got to wax scientific about the little bugs that would turn the wort we were making into the beer I’d later be drinking. “This thing is legit,” my dad said. “There’s real science in here.” (I hadn’t started reading it yet, so I didn’t realize that Chris White is also a microbiologist by training.)

Boil finished. Chilling went quickly. Got the wort poured over into the fermentor and did our top-off…5 Then took our gravity reading with the hydrometer. 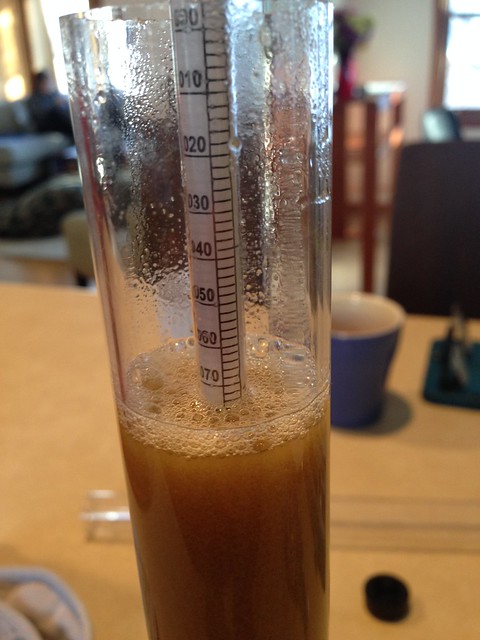 Looks like 1.075 to me! One point over our target. Color me pleased.

Beyond brew day, I did my usual nerdery: taking a-few-times-daily temperature readings as well as counting bubbles in the airlock. And while it’s peak activity wasn’t even close to “highest ever” (re: bubbles per minute) — boy oh boy did it have a long and active tail.

After a little over two weeks, I racked it over to secondary to get it off of the approximately 3 inches of trub resting at the bottom of the carboy. It hadn’t clarified very much, but the color was pretty good. And smell and taste of my tiny sample was spot on with what I was going for. 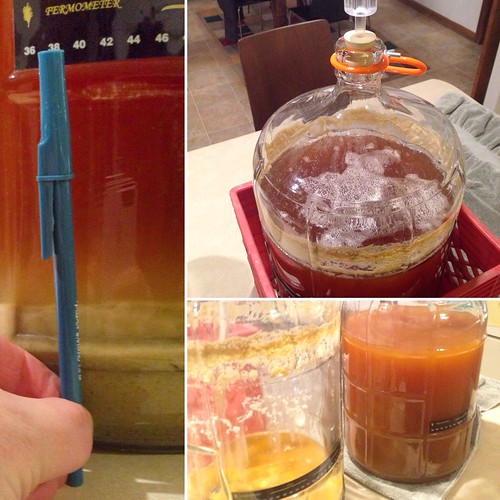 The next step was to let it condition for a few days — let some more of the junk settle out of the beer. Then I needed to hit it with the remaining 3 ounces of Galaxy for the dry-hopping.

A Note About Dry-Hopping

So far, and maybe this is because I’m dry-hopping in carboys, but dry-hopping has been nothing but trouble.

With Koru IPA, I dumped in the pellets and (naturally) they just broke apart or dissolved or whatever into the beer. This made it super cloudy and (AND!) clogged my bottling wand. Not that it didn’t taste great but…

Then with the already troubled Boo Beer, I had an ounce of fresh hop cones. Which, let’s face it, I hadn’t done the math on the geometry there, and hadn’t figured that I’d be stuffing those cones through the neck one at a time. Granted, the beer turned out reasonably clarified (certainly not as cloudy as Koru IPA) and the hop cones didn’t clog the bottling wand (nor the siphon, as I’d been warned), and they came out of the carboy easier than I’d feared. And again… Boo Beer tasted great. But it was just more of a pain in the ass than I expected. 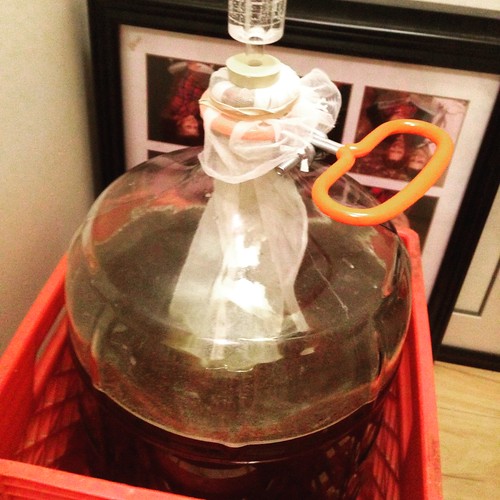 With Tilde Galaxy I figured I had it figured out. I would stuff a mesh bag through the neck of the carboy, then use a funnel to get the hop pellets down into it. And for the most part this worked out just fine. There’s still a little bit of agitating that one needs to do with the funnel to actually get the pellets through, but it worked. And the mesh bag kept most of the hop gunk contained, so siphoning/bottling wasn’t up against clogging. (Which, let’s face it, a hazy IPA is no big deal, but getting a clog in your bottling wand is a pain in the ass.) What I didn’t properly bargain for though… getting that mesh bag back out. Of course the hop pellets spread out. And of course they congeal into basically a disk. And of course that’s the wrong size/shape to come back through the neck of the carboy. Luckily those materials are pliable. Unluckily, it still took about 30 minutes to get them out. (And made a mess to boot.)

The lesson here? If you’re going to dry-hop, maybe stick to vessels that have big openings.

Aside from the hassle with extricating the dry-hops, bottling day went pretty normal. Racked the still-somewhat-hazy beer off what had settled out,6 and primed it with corn sugar. (You know the drill…) Filled: 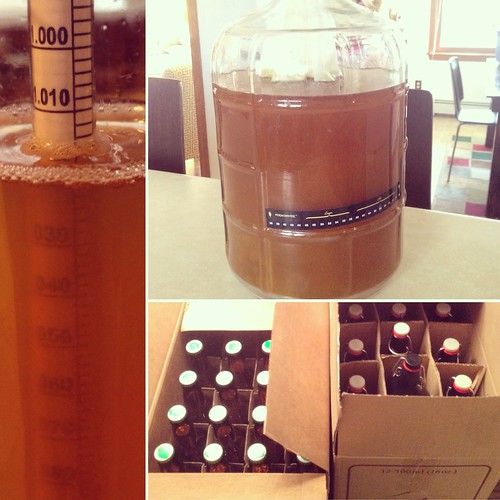 And into the basement they went for conditioning.

Now I’d chosen the basement because I thought that it was in the sweet spot where it was cool enough to help the beer clarify a little, while also being warm enough to let the yeast carbonate in the usual time. This was only mostly true. There was some carbonation after two weeks, but not quite what I was hoping for. The sample after two weeks tasted good, but not enough bubbles, not enough head. A gentle agitation and I brought them upstairs where it was a little warmer… Fast-forward one week and awesome!

Tilde Galaxy turned out a little cloudier than I wanted, but a dry-hopped IPA is going to be at least a little hazy, right? The aroma hits with the full force of those Galaxy hops — passionfruit, stone fruit, and all those tropical notes hit you full in the nose the moment you crack open a bottle. Those all carry through to the flavor, with the malts providing a nice neutral platform and the yeast supporting those fruit notes. Very satisfied with how this turned out. I might even set aside a couple to enter into an up-coming competition.

The partial mash recipe for Tilde Galaxy is as follows.