My fourteenth Tilde Gravitywerks homebrew1 turned out to be the first… learning experience? I set out to make a simple pale ale (originally tentatively titled “Acorn Pale”2) and what I wound up with, after a number of disappointing surprises, was the delicious and refreshing Boo Beer: 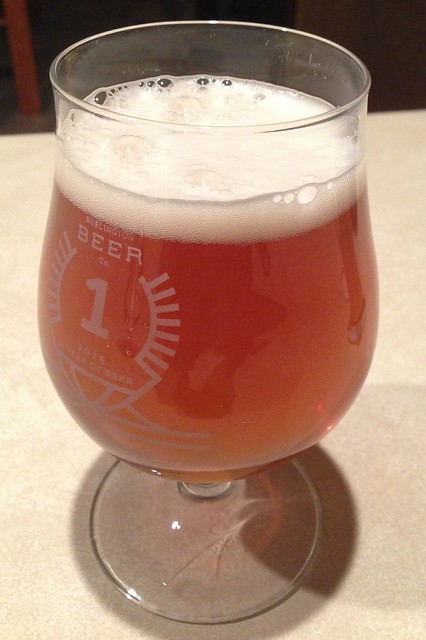 Boo Beer (née Acorn Pale) started out as a bunch of notes from my brewing journal. Simple pale ale? read one. Dry hop? Whole hops? Cascade! read another. And I saw that I had indeed not attempted a so-called simple pale ale yet.3 I had this idea that, in addition to Honestatis, it might be nice to have a staple beer. Something that I could serve to friends that would be a familiar style. Straightforward base malts, familiar hops, and a clean yeast. I worked out the recipe (vide infra), got my ingredients together, and kicked into brew mode.

That’s when things got… unpredictable?

Right from the beginning, things did not go right. While getting the wort together for the yeast starter, it boiled over at least twice. (Small boil-overs, but boil-overs just the same.) The starter itself krausened big time and almost forced the foam stopper out. 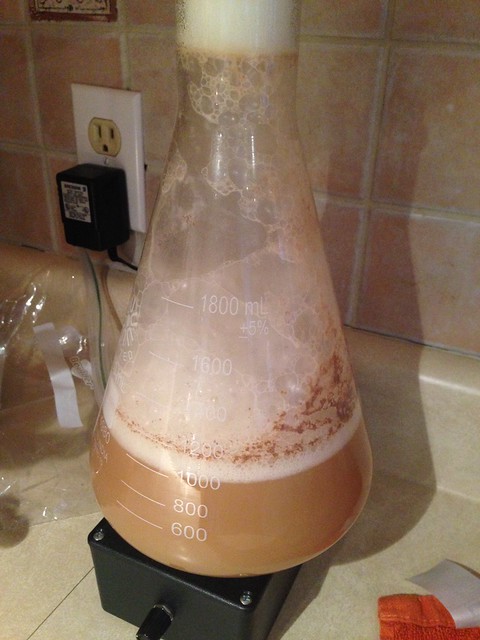 Come brew day, this luck continued. I had a friend coming over to help with the brewing, and he ran late. (No big deal but indicative of things to come.) I got the liquor heated just fine, but when I added the grains, the temperature didn’t come down enough.4 I added some cold water (about half a quart) and got it down to the right temperature. I did my usual towel wrap on the kettle and let it mash for sixty minutes. I made my first mistake when I decided to skip the mash-out.5 When I lifted the filter bag out of the wort, I didn’t seem to get much more out after squeezing. I took a pre-boil reading and came up with 7.9%Br which seemed OK — but I didn’t bother to double-check where it should have been.6 With my volume right around the target, I got the DME in there, stirred, came up with 15.8%Br (again, not double-checking the should be) and applied heat. Followed my hop schedule. Gave it 10 minutes to settle after flame-out. Had the right post-boil volume. Got it cooled to 70°F in just over 10 minutes.7 The time to transfer had come.

It’s worth saying here that I’d gotten a brand new 6½ gal. carboy that I was dying to use, and this was to be its maiden voyage. But oh man… I’d forgotten plenty of prep work.

As I added the 2½ gallons of cold water to that carboy, I noticed that I’d never marked off lines for each gallon. Oh well. I could just make some guesses. Then we started to pour the wort over from the kettle… But the filter disc in the funnel kept getting clogged with junk. The hop cones weren’t a problem (they were easily removed), but the break material was frustrating. It took close to 30 minutes to pour everything into the carboy.

And then… more forehead slapping. The stainless steel baster that I’d historically used to take samples for gravity readings? Nope. It couldn’t reach the surface of the wort through the carboy’s neck. We tried tipping the carboy, but that didn’t work either. Ultimately we poured off a small sample into a bowl. Sigh.

Then the real bummer: gravity was 1.034, when it should have been 1.054. I cringed. Nothing like this had happened to any of my previous brews. Even my first partial mash was within one point of the target gravity. Deflated, I pitched my starter and carried the carboy down to the basement, grateful that at least the whole Cascade cones smelled amazing. 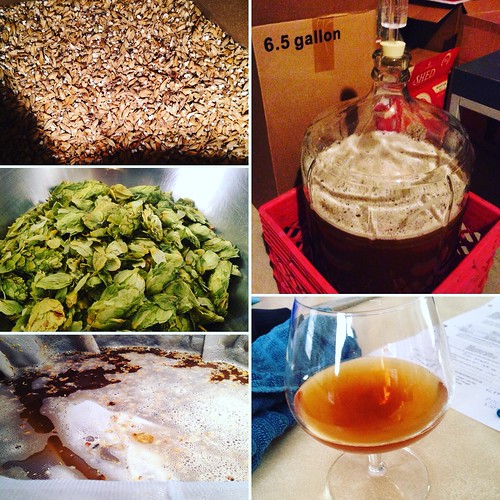 I tried to console myself with another note that I’d found in my brewing journal: Session ale recipe? Well, looks like I can cross that one off my list, too!8

Fifty-two hours after pitching and I had a nice thick cap of densely foamy krausen in the carboy. So I had that going for me. But about five days after pitching, things had dropped off dramatically. The krausen had fallen, and there was almost no activity in the airlock. And while this was arguably right on schedule, the temperature had fallen to 59°F — and 1056’s published low end is supposed to be 60°F. Feeling nervous, I cleared a space in a closet on the main floor and brought the carboy upstairs, where its temperature rose to 63°F over the next couple hours. 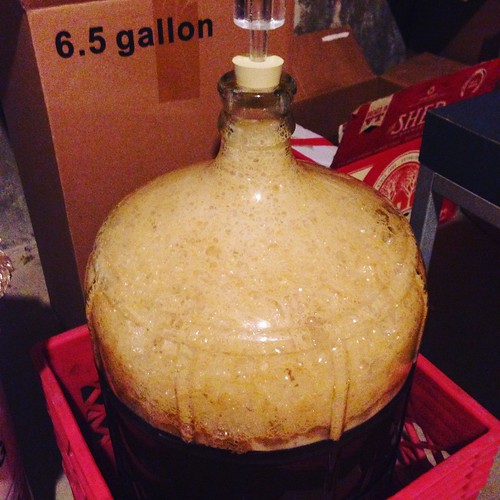 At this point, I’m second guessing everything. Do I stay the course on my single-stage/single-vessel fermentation plan? Do I dry-hop for three days as planned? Longer? Shorter? What am I going to do for gravity readings if the baster doesn’t fit? Should I warm it further to try to rouse or reactivate the yeast? Do I need a diacetyl rest? Did I accidentally over-pitch? How did I wind up with that low-gravity?

A Brief Aside About Mashing and My Starting Gravity

While all this was going, I did a lot of reading and talking about that too-low starting gravity reading that I’d gotten for Boo Beer. I could accept that I hadn’t hit the mark, but I wanted to know why. And if I couldn’t know why, then I wanted at least some decent operating theories. Why were my first four partial mashes all within a point of the target gravity9 and this one so far off?

Which isn’t to say that I naïvely thought I was going to get a definitive answer or anything like that. But through several blog posts, articles, and conversations, I ultimately concluded:

And/but/so the one that kept coming up? A longer mash.

An End to the Aside, and a Return to the Main Narrative

And so fermentation wrapped up. And so I settled on a day for bottling. And so I got that last ounce of Cascade ready for the dry-hopping. And once again, all my bad luck came pouring out.

My first plan was to get that ounce into an extra filter bag that I had. But I didn’t have any culinary twine to tie it off. Nor could I find any at the store. So I poured the hops into the bag and gave it a loose knot. But then I couldn’t get it through the neck of the carboy.11 FML.

Having to abandon my original plan, I improvised. Grabbed my funnel, spray sanitized it, and stuck it in the neck of the carboy. Except that hop cones are large, and loose, and happily jam up the neck of the funnel. And no amount of poking them seemed to make any difference.

Improvising again, I took to scooping the hop cones out of the funnel and just jamming them through the neck… pretty much one at a time. 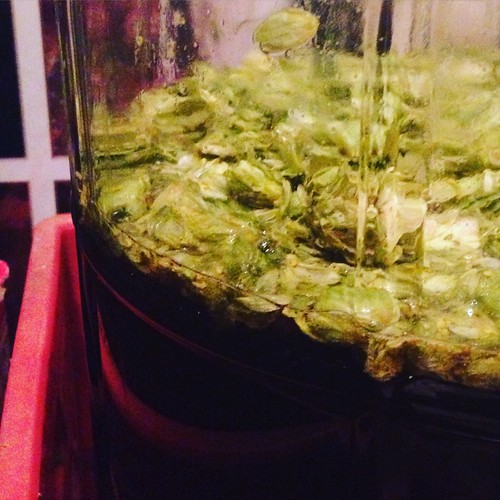 Three days with the cones floating along the surface. Then it’s bottling day, and I start to feel like my luck is turning around. First of all, I had enough 22 oz. bottles for packaging. And I learned how to use my racking cane as a make-shift wine thief for that final gravity reading. (1.011! About where I’d want it to end, though hardly the best attenuation.) Racked. Mixed up with the priming solution. Packaged 24 × 22 oz. bottles. And about a pint worth left over to enjoy flat.

And you better believe it was enjoyable. That Cascade hop aroma and flavor. It was going to be little on alcohol, but big on flavor. 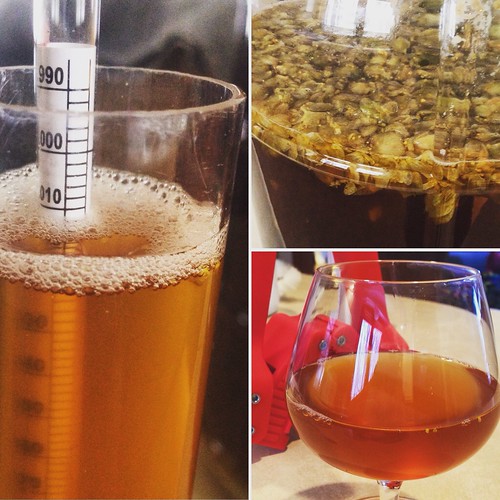 And boy did that ever turn out to be true. After carbonation wrapped up, the first bottle had everything I’d hoped for in the flavor: the malt backbone, the big citrusy aroma from the Cascade dry-hopping, and an assertive bitterness to balance it out. I’m still a bit bummed about missing the gravity, but the flavor is delightful. Would brew again.

The partial mash recipe for Boo Beer is as follows.