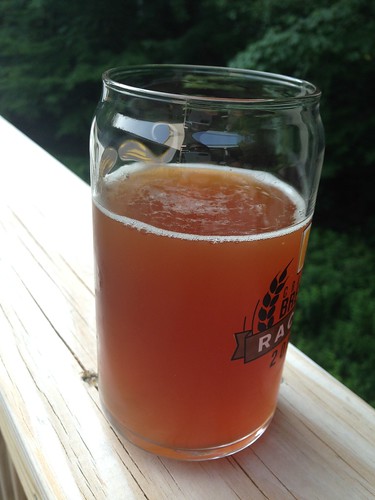 Historically I haven’t been the biggest fan of wheat beers. Looking at my Untappd ratings, wheat beers average around 3.39 (s.d. 0.74), and while there are some I enjoyed very much (e.g., 3 Floyds Gumballhead with a 4.5), this is a bimodal distribution that leans to the low end.

So then the obvious question: If you don’t like wheat beers that much, why bother making a wheat? A couple of reasons. First, while researching fruit-flavored beers, wheat kept coming up as a good vehicle for strawberries. Second, I’d just had a couple of wheat beers at the Craft Brew 5K in Stowe that made me believe I could pull off something that I’d like.1 Lastly, I’ve been having fun experimenting, and trying different things with each successive brew — and it seemed time to try out one of these yeast strains.

The story of this specific strawberry beer starts last year, when I first tried Strawberry Whale Cake by Burlington Beer Co.2 I don’t typically like fruit-flavored beers, but I’m a sucker for strawberries and this one pulled me in.3 I wanted to make something similar, but I didn’t want to do a cream ale as the base. I started poking around, looking at different beers that featured strawberry (amateur and professional alike). I kept coming back to wheat as the base. I had some skepticism that strawberries would pair well with the phenolics that the wheat yeast is famous for, but perhaps if they were mild enough… The more I thought about it, the more I thought that it could work.

Feeling fully bought into the idea of a strawberry wheat beer, I start piecing together a recipe. Wheat as the malt base. Pilsen or an extra-light malt to supplement that. Flaked oats for body and texture. (Started thinking “strawberry shortcake”?) A little lactose for added sweetness. Centennial hops for bittering, and Nelson Sauvin for aroma. And word on the street was that Wyeast 1010 would be a nice wheat yeast that wasn’t overly phenolic in the final product. 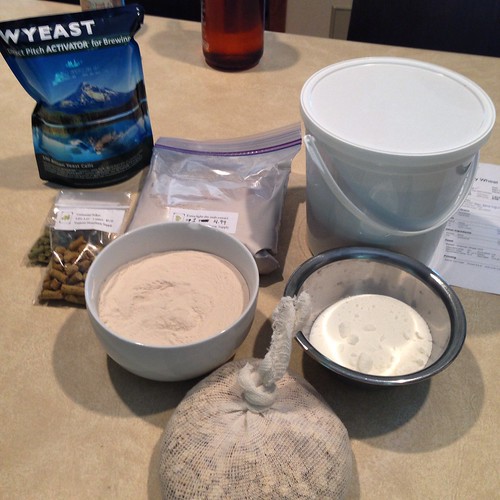 I debated on when to start; I was eager to get going after a fallow May.4 June is strawberry season, and getting my hands on some fresh ripe berries was all part of the plan. Ideally I wanted the berries to be pick-your-own. I wanted to get the timing right. Ultimately I just selected the day and went for it. If the berries at the farm weren’t ready… well, I’d just have to improvise. 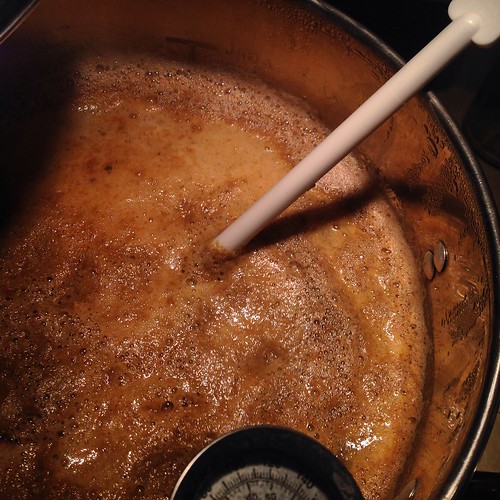 Now begins the part of this brew’s story where everything turns inexplicable and weird.

First there was the original gravity reading. The target O.G. was 1.051, but the hydrometer gave me 1.041 — and the refractometer gave me 8.4%Br. If I’m being optimistic, then I can assume that I made a mistake when taking the gravity reading — that I topped off to 5 gallons but didn’t get it sufficiently mixed up, and my reading from the top of the wort was just lower than the actual.5 (I certainly started with the right amount of fermentables.) Pessimistically, the refractometer was right and my O.G. was as low as 1.035. All things being equal, I decided to record the O.G. as 1.041. 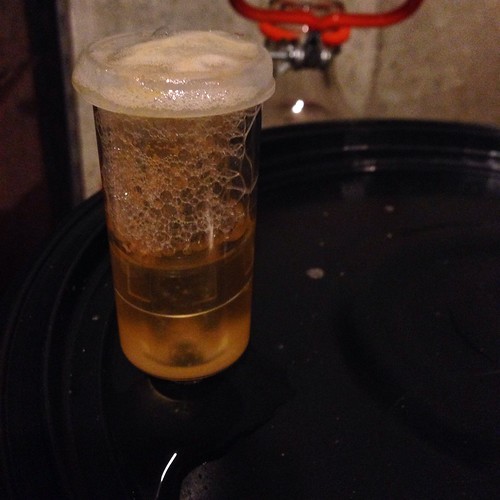 Activity (as measured by bubbling) dropped off pretty quickly after 24 hours, but there was quite the long tail on this fermentation. A plateau that seemed never-ending. And/but/so after about a week, I figured that it was time to add the strawberries. Bad news first: my timing was off as far as pick-your-own berries was concerned. If there were any farms close enough offering that, I missed them; I checked with all the farms I did know about and it would be at least another week for that. However, several farms did have plenty of fresh berries. I asked myself: Could the beer stand another week before adding the berries? The answer was a resounding I have no idea. I looked at my calendar, bit my lip, and purchased six pounds of strawberries. 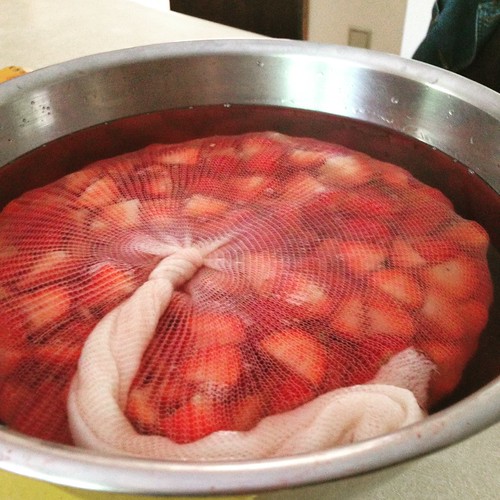 The next step seemed obvious: hull and quarter the berries, tie them up in a muslin bag and… something and then add them to the fermenter. But what was that something? I’d read about pasteurizing the berries — about covering them with water and raising that to 170°F for about 10 minutes. My friend suggested getting some cheap vodka and soaking them for approximately 15 minutes. I mulled that over, went with the latter, and then gently lowered the berries into the fermenter.7

(Side note: I had no idea the bag of berries would float in the wort like that.)

The strawberries spent a week in the beer — letting all their deliciousness and color into the liquid. There was a small spike of activity in the airlock right around the time the berries went in. But otherwise it was that same long tail. And this was a hard week to be patient. Partly because I was nervous (again: having never used fruit before) but also because by this point the anticipation was killing me. Come the end of that second week, I was ready to bottle. 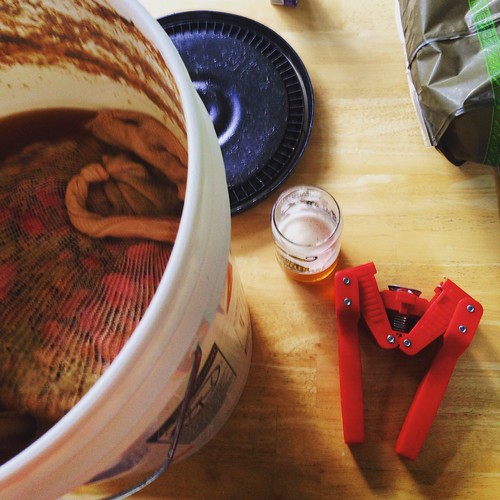 Why didn’t I rack to the carboy and do a turn in secondary? Two reasons. First, I didn’t really see the point in this case. I’d already done the flavoring round in the primary fermenter — whether that was the “right” thing to do or not. And to the best of my knowledge, many wheat beer styles are supposed to be cloudy, so clarifying that way didn’t make much sense either. And then secondly… well, I was getting impatient.8

We siphoned to the bottling bucket and were surprised that we didn’t have clogging issues. (I had a warning from a trusted source that those little seeds could cause problems.) Thanking our good fortune, we bottled up 43 × 12 oz. bottles — about four gallons total yield.

Fast forward another two weeks and… Not my best but certainly not bad. Very serviceable. The strawberry flavor came through the way I was hoping it would, but I don’t know that anything else really gives it any mark of distinction. The flavor is reasonably smooth, and while I got the mild phenolics (emphasis on the mild) that I was expecting from the yeast… I guess I was expecting something with a bit more of a spicy tang. That said, there is a winey-ness from the Nelson Sauvin that comes through in the aroma that complements the berries nicely. Oh — and the color? Much darker than I expected.9

I’m not sure if I would brew this one again. Perhaps with some tweaking. But I also haven’t had a chance to share it with friends yet, and I’m curious to know what they think.

UPDATE: (8/3/2015) Now that the beer has spent a little more time in the bottle, and now that a few people have tried it, I’m feeling better about Awkward Gingham. The feedback has generally been good. A. loves it; a couple friends that normally aren’t into fruit-flavored beers have given it a thumbs up; others with more diverse palates have also had favorable things to say. So to the question Would I brew it again? I just might make it an annual thing.

The extract recipe for Awkward Gingham is as follows.