Wherein I got nostalgic. Wherein I thought to myself I could clone a beer I like! Wherein I scrounged up a sell sheet that listed the ingredients and did my best to get the proportions right. Anyway… not exactly an original1 but in that vein: Summerclone, a blonde ale clone of Burlington Beer Co.’s multigrain golden ale, Summerfield2:

This beer’s story begins in July 2014. My book had just come out and my wife was throwing a surprise party for me. Since I obviously didn’t know about this, I ran some errands that afternoon, including stopping off at the fledgling Burlington Beer Co. to check it out for the first time. At the time, their drafts included:

And wouldn’t you know I immediately fell in love with that Summerfield — a light, refreshing golden ale. Fell for it so hard, in fact, that I was compelled to bring home a growler of it.

Burlington Beer Co. has been a great success story for the local beer scene. And while It’s Complicated Being a Wizard is a contender for best regularly available DIPA, and while Barbe Rouge and Barista have become local legends, and while I’ve already done my own take on Strawberry Whale Cake, and while Light in the Window has become my favorite overall beer… Summerfield, that first BBCo. love of mine, had fallen by the wayside.3

And so I had to take matters into my own hands.

At some point (and don’t ask me how because it was probably through Twitter but I can’t find the original tweet so who knows) I came across a shared Google Drive folder with a bunch of sell sheets for BBCo. beers. Among these were several favorites of mine. I sat on them for a while because I wanted to get a few designed-by-me beers under my belt before I tried to replicate something like this.

But summer 2016 was coming. And it needed to have Summerfield in it, so I downloaded that sell sheet PDF, fired up my copy of BeerSmith, and started tinkering around with proportions and specific ingredients and possible substitutions4 and just generally got down to the arduous task of recreating (in my mind) what this beer looked and smelled and tasted like. After no small amount of tinkering and uncertainty, I locked in on a formulation and went for it.

By the time I had my ingredients sorted out, I’d made a couple of substitutions. First, there was no sign of “Vienna Gold Pils” but I split the difference between some Vienna malt and some Pilsen Light LME.5 Second, somehow I’d gotten mixed up about who had what hops in stock and to save myself an extra trip6 I decided that Perle would be a just-fine sub for Challenger. Lastly, I did some creative interpretation on the “American Ale Yeast” from the sell sheet and went with Wyeast 1272 (“American Ale II”) instead of something closer to Chico (e.g., Wyeast 1056 or White Labs WLP001).7

Still feeling quite pleased with how the ingredients lined up, and confident that it would be a delicious beer (if not an exact clone), it was time to start brewing. I mashed in at 148°F and held that for 90 minutes. I tried not to peak too often, but I have to admit… it was a damn pretty grist: 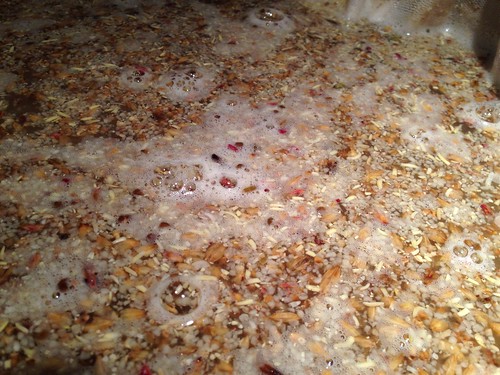 Color was looking good in the pot: 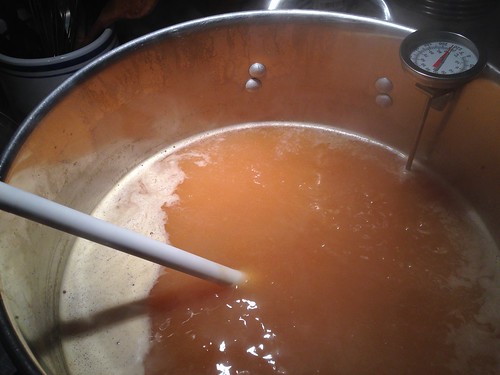 And the boys were captivated by the sights and smells: 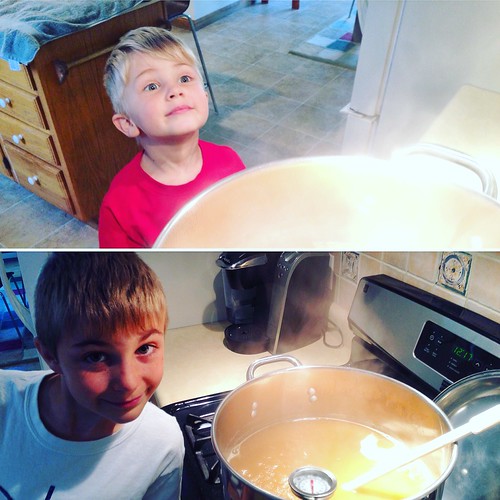 Boiled and hopped and cooled and did my top-offs and came in at 1.052:8 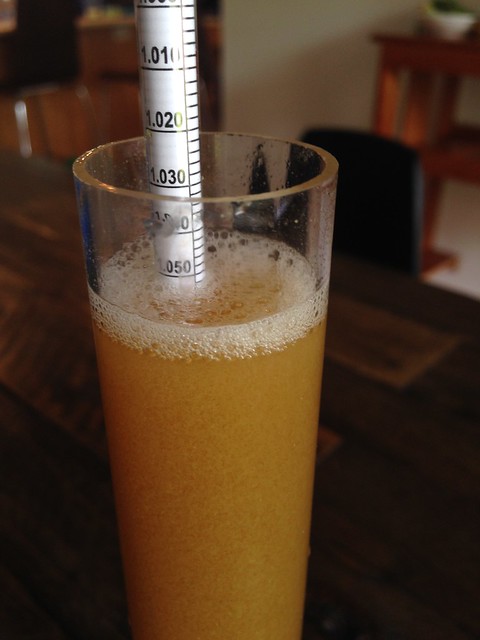 Pitched my yeast, posted some pictures, and got a nice little surprise in ye olde Instagram: 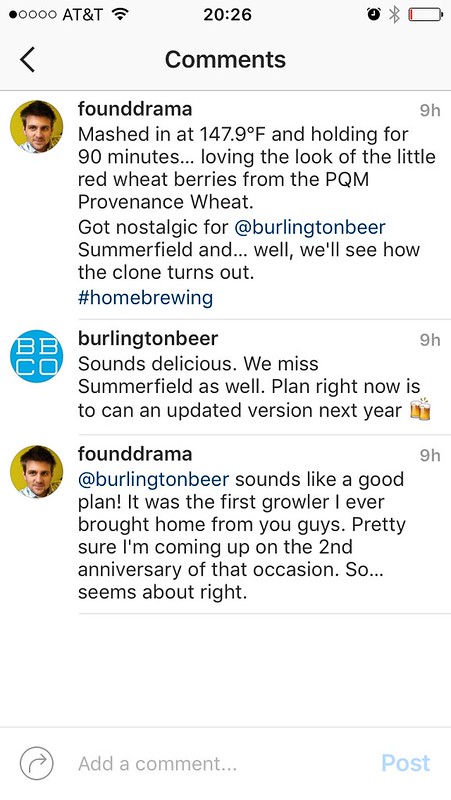 The 1272 got off to a bit of a slow start, but it eventually got going and the yeast did what it is that yeast like to do. The airlock had some good activity, but it never did get a big krausen cap. 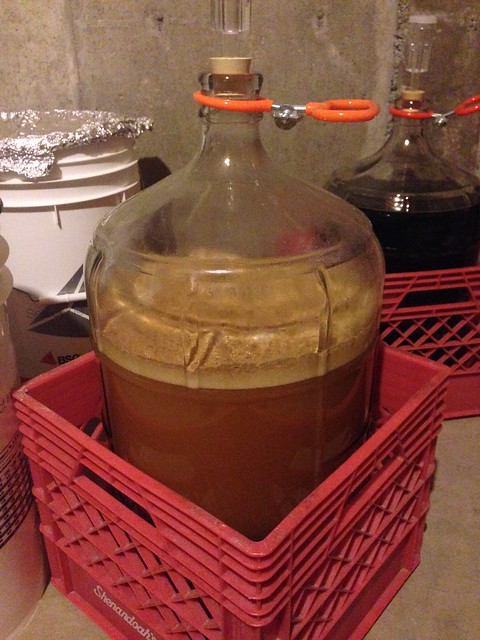 Just the same, it seemed to finish out right on schedule. I pulled a sample and the refractometer reading9 strongly suggested that fermentation ended and ended where it should. I gave it about another week to settle and mature. And then alas! I went to cold crash but… well, let’s say that that fridge is doing double duty and while the 5 gallon carboy might be short enough for the available space… the 6½ gallon carboy was not.10

Moving on to bottling day… not exactly an unqualified success, but certainly a good yield. Moving the carboy seems to inevitably stir up some of the sediment; and while that small amount might not have been too bad, I also managed to get a bunch while siphoning as well. Not a ruinous amount, but annoying given the clarity of the sample I’d pulled the week before. Nevertheless, packaged: 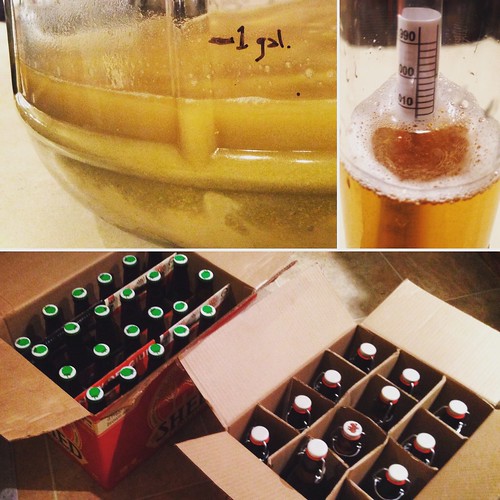 And once we patiently waited out the two weeks for the yeast to chew up that injection of corn sugar to make the carbonation? A treat. 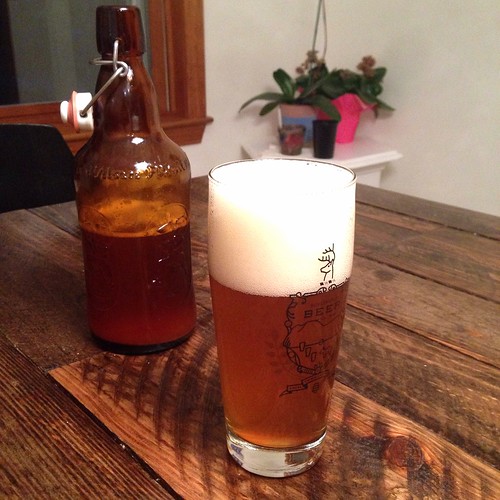 (That picture doesn’t do the color justice. Really need to get it in the right light.)

As I mentioned before, it’s been too long to know for sure just how close I got with respect to cloning Summerfield. But this turned out well. Tasty. It’s malt-forward and a little sweet, but has just the right amount of hop punch to balance that out. I’d under-estimated just how much the Mt. Hood hops would support the sweetness from this grain bill — but I also suspect that a lot of that is coming from the 1272, as well. This will be a fun beer to share with friends this summer.

The partial mash recipe for Summerclone is as follows.