Homebrew #14; the 11th as Tilde Gravitywerks, and my fifth original recipe. Acer Square is an assertive American porter with a touch of sweetness from maple syrup.

Sweetening a robust dark beer with maple is hardly an original idea. Vermont already offers two fine examples: 14th Star’s Maple Breakfast Stout and the venerable Fayston Maple Imperial Stout by Lawson’s Finest Liquids.1 Sierra Nevada did one, so did Brooklyn Brewery, and Sam Adams — and I’m sure there are many more out there. What I’m trying to say is, this isn’t like the time I decided to do a chili-pumpkin beer.2

We’d gotten a bunch3 of maple syrup from Square Deal Farm through our CSA this year and one afternoon it just came to me. The fall was on its way, and that meant robust dark beers. Why not sweeten one up a bit with a little bit of maple? I started my research which… Well, I may as well have just headed down to my local HBS in the first place.

I tinkered with a couple of ideas, got a recipe that I liked the looks of and come the first week of October, it was time to brew. 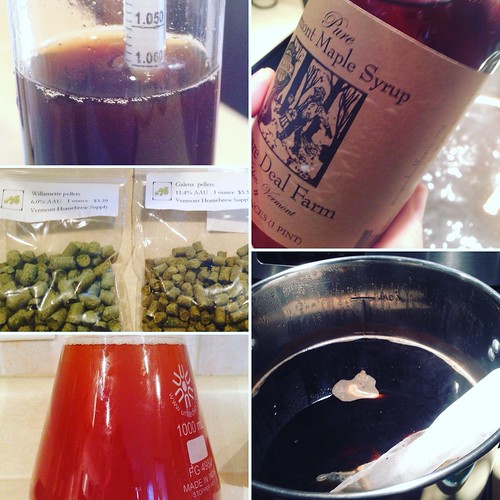 Having made a partial mash recipe, and having learned a couple of important lessons last time, things went pretty much as I expected. Which is to say: fewer missteps with the mini-mash, and we rolled right into boiling and adding extracts and hops etc. The highlight moment was up-ending a pint bottle of maple syrup at the 45 minute mark and just dumping that whole thing into the wort.

Fermentation took off like a rocket, and I had to switch from the airlock to blow-off tubing after less than 24 hours.5 There was a steep drop-off in bubbling activity after about three days, but then it had an unusually long tail of moderate activity.

Racked after two weeks in the bucket.

Three weeks in the carboy to condition, and then bottling day. Boiled a pint of water with ⅔ cup maple syrup (Square Deal Farm again!) and that was our priming solution. Racked onto that, took gravity readings for an F.G. of 1.014,6 and packaged 24 × 22 oz. bottles, 6 × 12 oz. bottles, plus 2 × 1 pint flip-tops. Just shy of the hoped-for target 5 gallons? I’ll take it!

(Oh and the preview sample pint was delicious.) 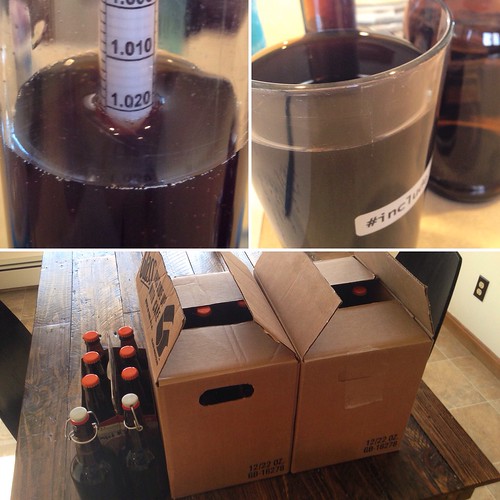 Fast-forward two weeks and… Well, it came out just about perfect. Opaque, dark brown in the glass (almost black) with at least a finger of fluffy off-white head that seemed happy to stick around. Aroma has some toast and biscuit character, with a whiff of that maple. Solid malt backbone with a porter’s paradigmatic roasty flavors complemented with a touch of the lactose sweetness and then again with the maple. Finishes with an assertive hop bitterness, but nothing that lingers. Mouthfeel leans to full but isn’t mouth-coating. Oh so good, and such a great beer for the chilly fall as we move into winter.

But now the dilemma: I’d half-expected ArtsRiot to run another homebrew competition to finish out the year, but… no sign of such a competition on the calendar. Do I cross my fingers and try to sit on the batch, be first in line to enter? Or do I go ahead and start drinking up this masterpiece?

The partial mash recipe for Acer Square is as follows.

Acer Square, an original porter with maple by Tilde Gravitywerks

One Response to Homebrew #14: Acer Square