Homebrew session #13 was an experiment on all fronts. How to create a novel take an oft-loved-yet-also-oft-derided seasonal variety? I’m talking of course about the Halloween pumpkin beer, but figured why not add a little chili heat? Thus was born Flaming Hessian, the fourth Tilde Gravitywerks original: 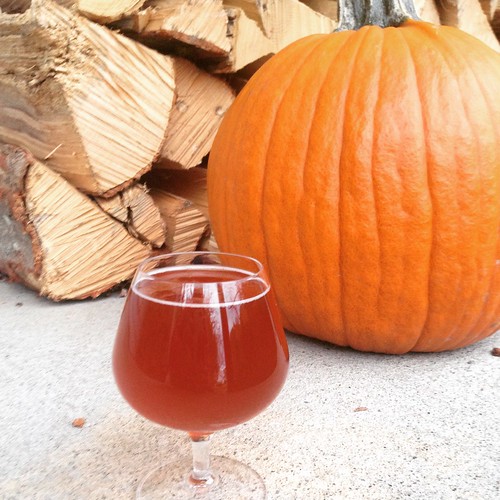 This beer’s story begins one summer night, by the pool, during a party, while I chatted with my friend about this homebrewing hobby I’d picked up. I never meant to invent this recipe. I never meant to drag him into it. He just said he might like to brew with me some time. He just said that his wife liked pumpkin beers. And everyone at the party had started idly speculating about what fun it would be to have a big ol’ Halloween party on our block. This led to all of those conversational threads tangling up and I just couldn’t resist the urge to get creative.

That was how we got it in our heads to make a chili-pumpkin beer.

And I did a little research.

My first instinct was to crib from NortherBrewer.com’s Smashing Pumpkin recipe; and/but while their video about using real pumpkin was useful, I also didn’t want to use a kit this time around. I read through some threads on HomeBrewTalk.com (here, here, and here), and then this bit from SILive.com, these “tips from the pros”, the American Homebrewers Association’s article on designing pumpkin beers, and a couple recipes (here and here). Eventually I had enough ideas that I was able to put something together on my own.

This brew represented three firsts for me:

Brew day came the second Saturday in September. My friend came over and, ingredients and equipment all arranged on the counter, we dove in. We collected and heated the water for the mini-mash and talked through the rest of the steps while we waited for the thermometer to hit 160°F.

Two things that I quickly realized about partial mash. First: the essential basics of mashing are actually not all that difficult and I really don’t know why I’d made it out to be this arcane process in my imagination. Second: you’re really better off by not fussing with things while the mash is going on.1 I made the mistake of taking the temperature of the mash three times in the first ten minutes, thus accidentally allowing the temperature to drop below 150°F briefly. (And then heating it up almost too much afterward while trying to recover from that first mistake.2) 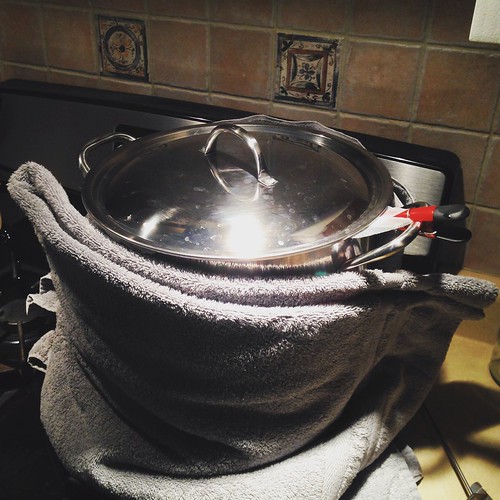 All in all, the partial mash was a success. We had a starter wort3 with 3.2%Br to work with, and we set that to boiling. We added our extracts, brought it back to boiling, and dropped in our hops. With ten minutes to go, toss in some Irish Moss.4 With five minutes to go, some allspice and cinnamon. Once the boil was complete, we activated the wort chiller.

Now, a brief aside on the immersion wort chiller: somewhere in the first couple months of homebrewing, someone had told me that a wort chiller wouldn’t really help me out all that much. That I would be just fine with ice baths. I wish I could remember who that was, because I would never take advice from this person ever again. The chiller brought the wort temperature down from boiling to about 72°F in 25 minutes and change.5 That’s about 30°F cooler in about half the time as the ice bath method I’d been using up to this point. I’m a convert on the wort chiller. Completely sold. If you don’t own one, go out and buy one now.6 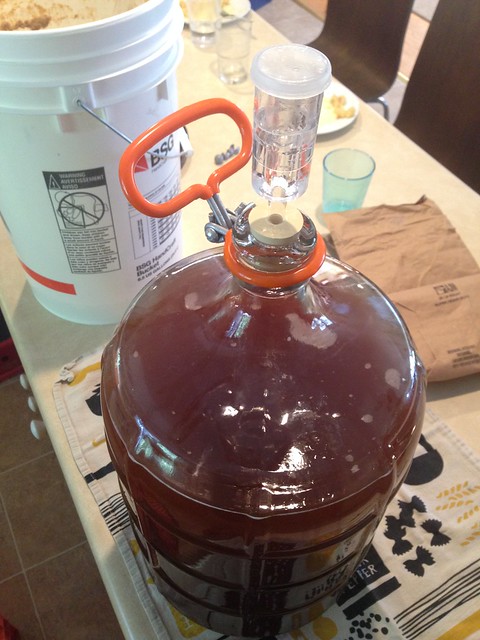 Fast forward another week: time to add some more flavor! We split and seeded8 a vanilla bean, and then likewise split and seeded a chili pepper.9 Those two items got soaked in vodka for 20 minutes and then… 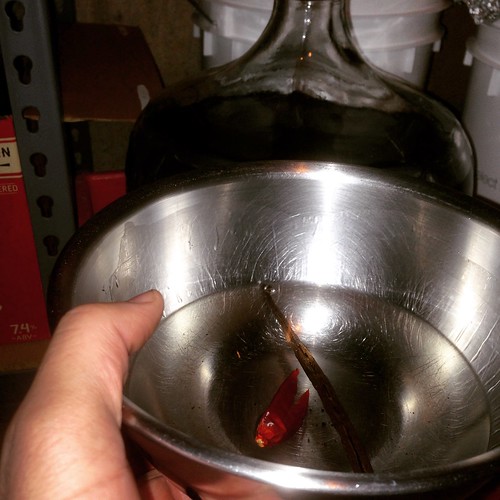 …boom! Added to the beer.10 Let those soak for another week or so and then bottling day… 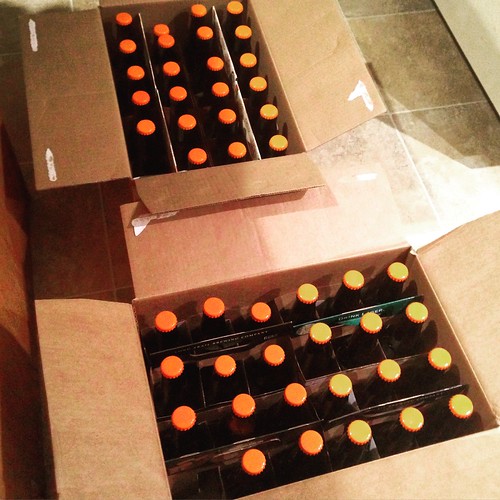 Wherein we packaged 46 × 12 oz. bottles of Flaming Hessian. The preliminary taste test (from the bottling bucket dregs and hydrometer sample) were… a little underwhelming. It had the body of a pumpkin beer, but the most prominent flavor was the allspice; the cinnamon and vanilla were nigh undetectable, and although there was some chili heat, it was definitely mild.11 (Not that I wanted to over-do it but…)

The results were… Well, they weren’t quite what I was going for. As with the bottling day sampler, the chili (for example) was present, but subtle; not as much heat as I was going for, but I suppose it’s better to err on the mild side here. The pumpkin adds some nice body to the beer, but it’s true what they say: almost no flavor from the gourd itself. The biggest flavor note is from the allspice, with the cinnamon providing some back-up. The vanilla is hardly there at all. Overall, a bit of a disappointment, but the feedback I’ve gotten from friends etc. has been largely positive. “Well-balanced, and not bad for a pumpkin beer.”

The partial mash recipe for Flaming Hessian is as follows.