Since I first started brewing, I wanted to concoct a big chocolatey but also peppery-spicy imperial stout. I chipped away at the recipe for over a year, working on a bunch of different versions of it. When Alan Rickman passed away, that was the inspiration to go for it. I had the recipe, but now I had the name:

With an in-theory-serviceable formulation (more on that later) and an irresistible vanity name, I decided that Snape Stout would be my second brew of 2016, and the first where I purchased my ingredients from the brand new just-down-the-street HBS, 1st Republic.

And while I left the store excited to get this brew started, things went awry almost from the very beginning. (One of Snape’s curses upon me, perhaps?)

I mixed up a 1600 milliliter starter for the package of 1028 that I bought. And while the flask didn’t boil over (a first?) — it took about 40 minutes for it to cool down enough to pitch. This was at least twice as long as it usually takes. OK… Let it propagate for a couple of days and then put it into the refrigerator to crash the night before brew day.

So not that bad of a start, and certainly not cause for alarm. But not a good omen, either.

The ill fortune really sets in on brew day. Problems begin right with the mash. First the temperatures are too high when I mash in and I start adding cold water (a cup at a time) until it’s down to 153.5°F — “close enough” to the target 152.1°F, right? And I say to myself we’re looking at a 75 minute mash, but let’s have that go all the way out to 90, OK? As such, I let it go that full hour-and-a-half, no fussing with it. Temperatures are down to 147.8°F when I raise the heat for the mash-out. 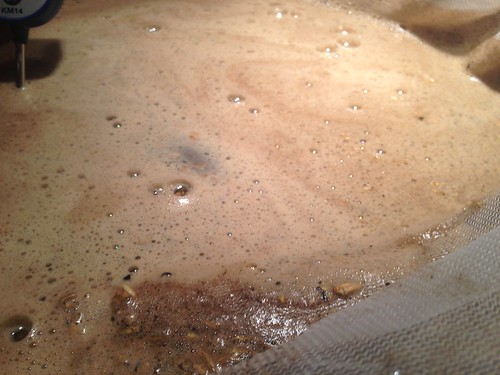 At this point, the refractometer says 17%Br and while that seems a little on the low side, I’ve also still got 5 lb. of DME to add. It’ll be fine… I reassure myself.

I get the kettle going for a 60 minute boil, add my first 1 lb. of DME, and start with my hop schedule. Galena… Columbus… Then 4 lb. more of DME as a late addition… 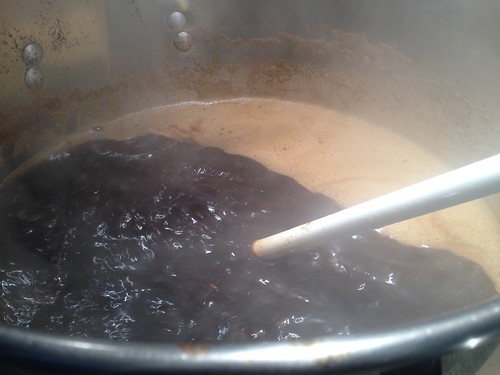 Then I can’t get a decent gravity reading off the refractometer because the wort is so… cloudy?

I transfer anyway, pouring the kettle over into the 2 gal. of water already in the carboy. And then I top off to the full 5 gal.

But I’m disappointed by my gravity readings. The refractometer says 16.4%Br; the hydrometer gives me 1.073 — a full 19 points shy of my target. I mean… 1.073 is hardly session but it’s also not the high gravity that I need for putting the “imperial” in “Russian imperial” stout. Well, screw it, I say to myself — sometimes you’ve just got to go to war with the gravity you have.1

Only now I’m thinking that I might be about to (severely?) over-pitch…

And but so I pitch.

And but so I go to stopper the carboy and… the drilled stopper falls in.

Luckily I have another stopper, so I just sanitize that one, get the airlock set up, and schlep it over to the brew closet. This is just going to have to be our starting conditions.

Within seven hours, I have some activity in the airlock. By fifteen hours, it’s getting vigorous. By +31 hours, the airlock has overflowed, there’s a strong smell of esters in the closet, I’ve got some of the Highest Krausen I’ve ever seen, and… the fermometer has spiked to 76°F.2 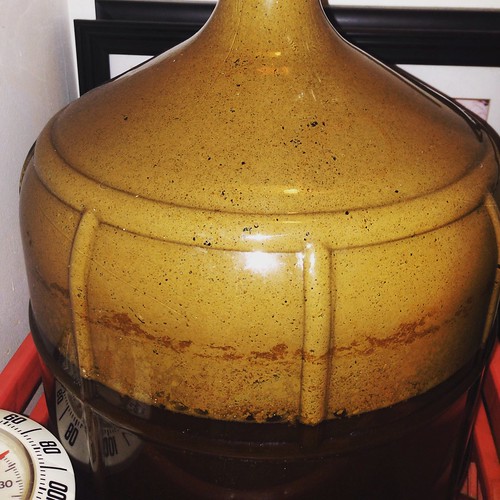 Things seem to calm down a bit around +50 hours, but we’re also crashing hard and fast — w/r/t/ airlock activity and temperature. I try to give it some time to finish up before taking a gravity reading. And when I get around to pulling the sample for the refractometer reading, I get 11%Br — which is around 1.029 (by my conversion), which is about a 59% attenuation and just seems like… well, like the yeast have stalled.

What’s a homebrewer to do? Well, this homebrewer pitched a sachet of EC-11183 and about 2½ tsp. of yeast nutrient. Agitate! and leave for another week or so and whip that refractometer back out and…

11%Br again. I guess that’s just where we’ll have to stay.

A bit over three weeks after pitching, and with a gravity that wasn’t budging, it was time to get this beer racked to secondary and free up my carboy for the next brew.

I’d gotten a new auto-siphon that made very short work of the 4½ gallons of beer that came off the 2¼ inch trub layer. 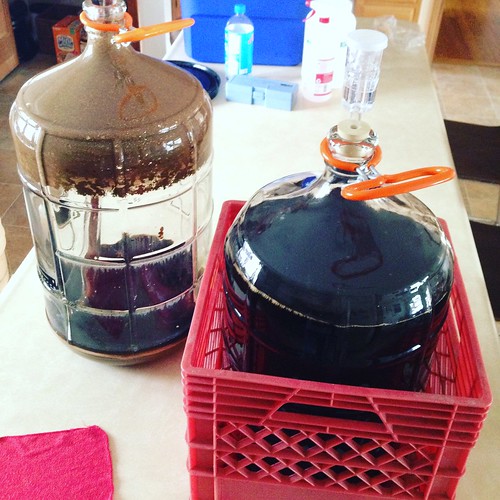 The really bad news here was that the sample I pulled tasted strongly of alcohol. And not in the about-9%-like-it-was-supposed-to-be sort of way but rather more like the the-yeast-went-nutso-and-over-produced-fusel-alcohols sort of way. (ÐÐµÑ…Ð¾Ñ€Ð¾ÑˆÐ¾!)

Regardless of the fusels, the recipe always called for some other taste elements to get thrown in. And about two weeks later, I did just that: I added cacao nibs, japonÃ©s chilis, vanilla beans, and (because at this point all bets are off…) the 375 ml of vodka that I’d used to pasteurize all of the above. 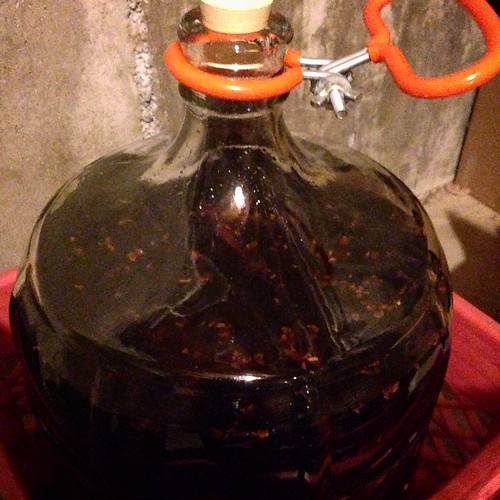 Regardless: tasting notes from bottling day ran something like:

pepper spice! some cinnamon (funny b/c none was added) — roast + chocolate (latter esp. on aroma) some alcohol (fusels? age out?) curious how honey will affect carb. & final aged product

I let this one age another month in bottles before I tried one. (Almost 19 weeks between brew day and the first taste.) That first Untappd check-in read:

First one since bottled! Chiles seem to be the prominent note, but less harsh now that it’s had a month to bottle condition. Vanilla comes through, but perhaps at the expense of the cacao? And/or the cacao just rides the malt’s coat tails?

Anyway: results were better than I expected/feared?

Criticisms of my own creation here:

I’ll brew this one again some day. I’ve got some ideas how to make it work better.

All spice ingredients are added to secondary. Sanitize by soaking in 375 milliliters of vodka for 20 minutes. Add all ingredients to secondary fermentor; optionally also add the vodka.