Given my promising results last year1, I decided to go ahead and enter the 2017 Greg Noonan Memorial Homebrew Competition (organized by the Green Mountain Mashers) again. I entered three beers2 and though not all of them came home with ribbons, I’d say I did alright…

My big winner from the competition wasn’t even one that I’d originally planned to enter. Diplomatic Mission (my rye braggot) had originally been brewed as an experiment, and purely for personal consumption. And yet, despite that, and despite being my first ever mead of any kind, it brought home a First Place ribbon for its category (Spice and Specialty Mead) and earned me Vermont Mead Maker of the Year! Any ribbon at all would have been unexpected; to bring home the Mead Maker of the Year award was… truly a shock and an honor.

The judges gave praise to the bouquet and color, to the malt sweetness and the honey notes behind. A couple remarked that it was a bit over-carbonated (I disagree, but maybe I should have entered it as sparkling?) and also that it got cloudy as it went on (which, yes I agree, and I know two things I can do differently next time).

Not bad for a dilettante. And thanks out to Aaron for throwing down the gauntlet. Glad I accepted the challenge. 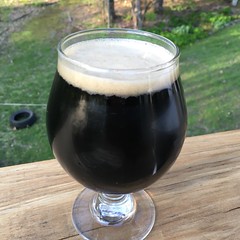 I say this somewhat tongue-and-cheek because Doors Off! (the Kauai Tropical Stout) actually came home with a decent score, despite the faults that the judges found with it.

The big irony around this one was the sheer amount of creativity and care that I put into it, and then the tremendous hubris with which I entered it. As I wrote in its summarizing blog post, I’d spent months planning it, tinkering with the formulation and every little detail. I showed it off to everyone, and everyone seemed to love it — even the BBCo. crew:

So when I entered it as a “29A. Fruit Beer” (with the base being 16C. Tropical Stout), I felt certain that it would bring home a ribbon. I didn’t have my sights set on Best of Show necessarily, but surely this could crush its category.

And yet it did not.

Looking over the judges’ feedback, I guess I didn’t factor in how inconsistent the carbonation could be from bottle to bottle. (Open to ideas/suggestions there!) The feedback indicated that they liked it (e.g., “Cool beer!”) but that it suffered from an overall low carbonation; and while I’d seen a couple of my own bottles do this, most of them seemed to be sufficient in this area. Oh well — I still think that I ended up with the beer I was going for, even if a few bottles were off. (Too bad those were the ones that went to competition.)

Now as for the comments that there wasn’t enough toasted coconut flavor… I wonder just how much coconut I’d need to use?

What? Earning Mead Maker of the Year for my first ever mead wasn’t surprise enough? Let this one sink in… 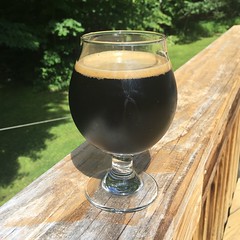 Are you a regular reader of this blog? Do you remember the comedy of errors that was the brewing of Professor Severus Snape’s “Dragon Cloak” Malevolent Wizard Stout? Well, fast forward a year and I still had about a dozen or so bombers kicking around the basement.

To be frank, I only entered this beer to see what the judges would say. I mean — it isn’t that I thought it was terrible just that I made five gallons of a spicy pepper stout that was in so many ways not what I was going for.3

So imagine my surprise when, not only does it bring home a decent score, but Second Place for the Spice/Herb/Vegetable Beer category.

All in all, a great showing for me — and great feedback from the judges!