In addition to all the homebrewing I’ve done over the past two and a half years, I’ve also been spending a lot of time around the local mead hall. As such, I’ve consumed my fair share1 of mead. But I hadn’t yet made any. Deciding that this was an error to remedy, I combined this urge to brew2 with my predilection for rye-based fermented beverages. A rye braggot! And (while the name came much later) thus begins the story for Diplomatic Mission:

This brew begins much as described above. In my journal, my first reference to it is in March of 2016. I was visiting the mead hall and chatting with Erik (then head brewer for Havoc) about mead, mead making, and also (for some reason) Light in the Window and rye. It’s at this point that the idea starts to take shape. Erik did not talk me out of it.

Fast-forward a couple of weeks and I find myself having much the same conversation with Ricky. This is where things start to get more specific. He’s got ideas. Recommendations. Advice on what kind of malts to throw in with the rye, and in what proportions. I mention how I just couldn’t settle on a yeast strain. He helped talk me through that decision, too. What a guy!

I plug away a bit with my formulation and I’m all set to go. And/but/so then I get caught up in brewing a bunch of other things and nine months go by. Nevertheless, December comes and I decide it’s finally time. 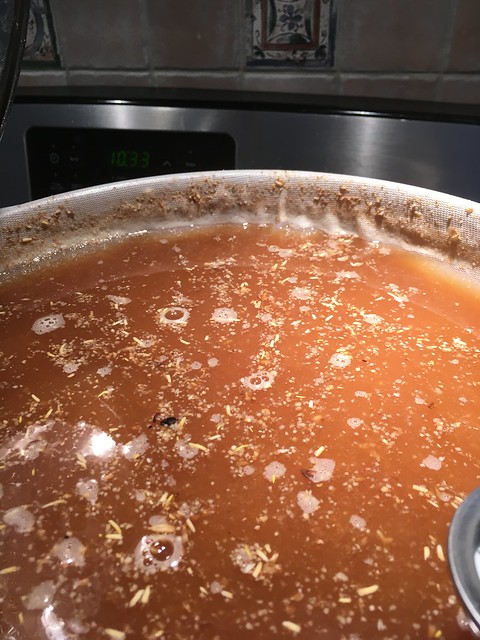 Kicking off this brew day was much like most of my other recent brews. A little milling, some strike water heating, staging of gear and ingredients… I mashed in at 149.9°F and took a pH reading with my brand new digital pH meter: 5.46 — which seemed… OK? Not that there was much I could do about modifying that pH, but it was interesting to start getting readings on this. I let the grains mash for 90 minutes before doing an iodine test (which indicated complete starch conversion). Mashed out and took a quick gravity reading: 1.032, which seemed about right. Did my boil; followed my hop schedule. I put that jar of honey into a hot water bath to soften it up while I chilled the wort. Also set my Belle Saison to rehydrating at about that time.

After the wort was cooled to 68°F, I took another gravity reading. After all the calibration adjustments, I was getting 1.040 — slightly higher than expected, but OK. And then things get… interesting.

First, the wort from the kettle exceeded the volume of the carboy. I had to deal with a bit of an overflow there. Whoops! OK. But then as I turn to grab the honey, it occurs to me: it’s going to overflow even more! So I made sure the wort was good and mixed up (no stratifying!) and poured off a little to make room. Then I started to add the honey.

Which was… clumpier than I anticipated. Perhaps I hadn’t warmed it enough? Or perhaps I had but in the confusion about my volumes it then had a chance to cool down? Regardless, I had my (sanitized!) latex gloves on and so I just did the dirty work of scooping it all out of that jar and getting it through the neck and into the carboy.

But I’m pretty sure that — looking at the clumps of honey sinking to the bottom of the carboy — not all of the fermentable sugars are in solution. BeerSmith says 3 lb. of honey will add about 35 gravity points to a 3 gallon batch. My last gravity reading was 1.040. I do another and it says 1.045. So nope: no way the honey is fully in solution. But OK… Let’s take another gravity reading, this time from the wort I “recovered” from the carboy to prevent a second overflow. Again: 1.040. With my wort readings in agreement, the rest should be simple math, right?

And feeling confident enough in those calculations, I pitched my rehydrated sachet of Belle Saison. 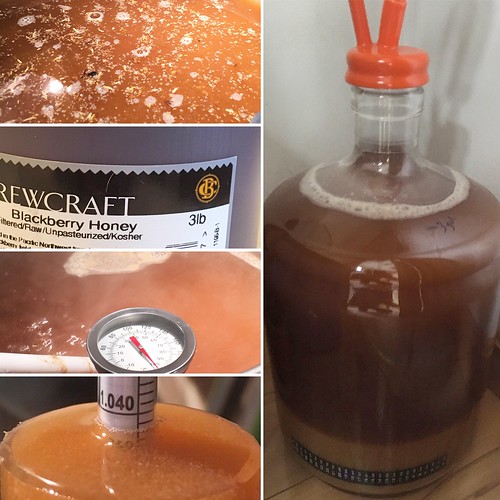 A Brief Aside About the Name

Since I came up with the idea for this formulation, all this time I’d just been calling it “my rye braggot”. And there’s nothing wrong with this name. It’s descriptive, if nothing else. But I like my brews to have… somewhat more spirited names. Eccentric. Whimsical. Erudite. Poetic. Evocative.

And in 2016 — that woeful year — I’d already named two of my brews after celebrities that had passed. First there was the Snape Stout that I’d named for Alan Rickman. Then there’s Sirius Moonlight, the “Vienna mit Roggen” that I named for David Bowie. So why not a trifecta?

When I heard that Carrie Fisher had died, there was a spark in my mind. Could this brew be named for her? Why wouldn’t it? The only question was, what name was appropriate? And before long, it was only too clear.

I don’t know what you’re talking about. I am a member of the Imperial Senate on a diplomatic mission to Alderaan…

Mead meets beer? There’s your diplomatic mission. And given what we know from Rogue One… Well, it seemed absolutely perfect.

Fermentation on this brew was fun to monitor. Less than 20 hours after pitching, there were bubbles galore in the blow-off bucket3 and even some krausen getting pushed through. In fact… it was pushing so much krausen through the tube that I had to swap the bucket in the blow-off setup.4 Then around +94 hours post-pitch, I notice something interesting on my graphs: the bubble activity in the bucket (as it stands in for an airlock here) is far exceeding that of any previous brew.

And it went like this for days. And then about 8 days post-pitch, I hit it with some yeast energizer and let it warm up.

At 12 days post-pitch, I took the first of several gravity readings: 1.007 — which was significantly higher than the 0.996 that BeerSmith estimated. Fifteen days post-pitch: 1.005. Eighteen days post-pitch: still 1.005. But this seems… acceptable to me. Especially after reviewing the BJCP braggot style guidelines and a few real world stories. 1.005 it is.

While I didn’t have the same blackberry blossom honey, I had some decent-tasting wildflower honey that I could use for priming. So that’s what I did — portioned out an appropriate quantity for that, mixed it with a pint of water and boiled it for 15 minutes. After the priming solution cooled, I racked the braggot onto the mixture and proceeded to bottle. I decided to use my flip-tops, thinking I’d use most (but not all!) of them. And then I did (in fact) use up all of them. 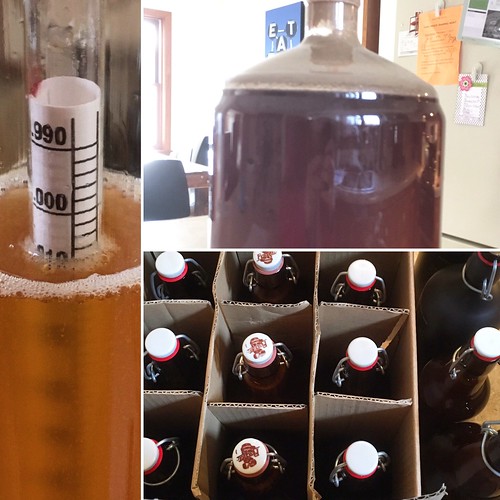 And then… we wait.

Overall impressions? Not exactly what I was going for, but still quite tasty, and some valuable lessons learned. First of all, it has a nice bouquet — a faint honey sweetness that lingers around the edges of floral and blackberry notes. (I had no idea the blackberry would actually be discernible considering that there’s no actual fruit in it.) On the palate, the braggot takes on a vinous character; mouthfeel is somehow simultaneously viscous and dry. The flavor leans mostly to the honey; the spicy qualities of the rye are subtle and show up to add a complexity to the otherwise honey-dominated profile. As for those coveted peppery esters from the saison yeast? It isn’t that they’re absent, but they don’t come through as strongly as I’d hoped. Perhaps if I’d fermented at a warmer temperature? Another noteworthy item here: for a beverage that, according to my measurements at least, comes in at 9.3% ABV… it sure doesn’t drink like it. It’s very smooth, and no alcohol burn at all.

Would I brew this again? After having sampled only a couple of them, it’s hard to say for sure. I think after I’ve allowed a couple of these bottles to age, I might have a better sense of that. What is this going to taste like at 3 months? At 6? Twelve? I’m skeptical of the ideas out there that mead takes “months” to fully ferment; though I do believe that some beers and other beverages benefit from a lengthy maturation time.

If asked today what I’d do different with this brew, I suspect I’d do the following:

Considering I have no solid baseline for braggots, I think I did pretty well here. It’s certainly enjoyable. Now to decide if it’s worth sacrificing a few flip-top bottles to enter this one into competition…

The all-grain (BIAB) recipe for Diplomatic Mission is as follows.