When 14th Star announced that they were going to sponsor the third Make the Cut challenge in 2017, I knew immediately that I wanted to enter, and I knew immediately what beer I was going to enter. After all, if I wasn’t fond of this recipe, then why would I have brewed it four previous times?1 So, with pride, I entered my house favorite: Honestatis: 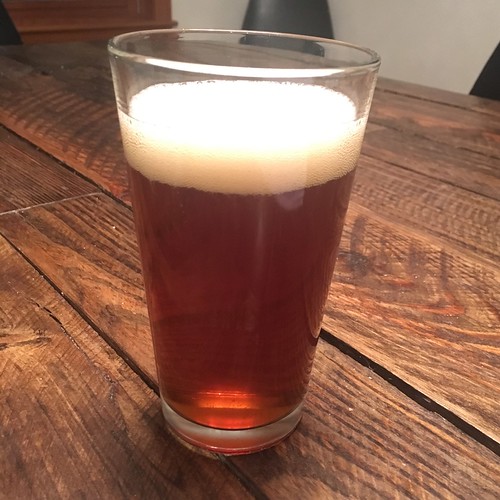 With that most important choice out of the way, I pondered what tweaks to the formulation would be necessary to go all-grain.2 I’d described batch #4 as “very close to perfect” and so I didn’t want to mess with it too much; on the other hand, it was also a partial mash batch where 27% of the fermentable sugars had come from a can of Briess Munich LME. How was I going to make up for that? Would a 1:1 percentage-wise replacement be good enough? Given that I’d recently recalculated my brewhouse efficiency, did I trust my extraction rates? Did I know enough about my water chemistry?

I hadn’t even bought any ingredients yet and already I was feeling in over my head!

Taking a deep breath, I reminded myself that it was best not to over-think anything. Keep it simple. A made couple of decisions:

With the tweaks made, I committed to the formulation in BeerSmith and printed it out. I was ready as I was going to be.

Right from the start, a challenge emerged and I had to think on my feet. I filled my kettle with the 17.66 quarts of strike water that BeerSmith calculated for the “BIAB, Light Body” mash profile. Except that 17.66 quarts is just over 4.4 gallons in a 5 gallon kettle. And that’s before any of the 9.8 pounds of grains are added. Thinking back to Gordon Strong’s suggestions on the matter, I jumped back into BeerSmith and changed to a Single Infusion Mash profile. By default, BeerSmith uses 1.25 quarts per pound, but Strong’s recommendation is for a 1.5 qt./lb. ratio; I went with Strong’s recommendation and although it was a very full kettle, I managed to dough in and get through my 148°F 75 minute mash without overflow or incident. 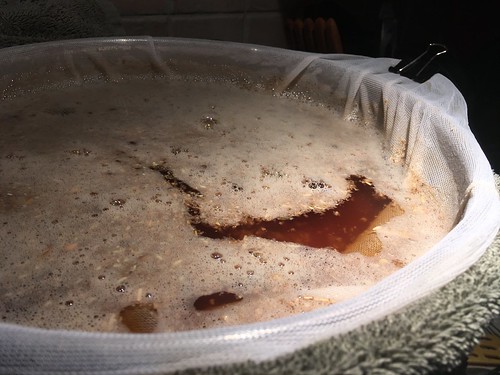 I skipped the mash-out. I “pseudo-sparged” by rinsing the grain bag with a gallon of approx. 160°F water and using that to top-up the kettle to 3.7 gallon boil volume. 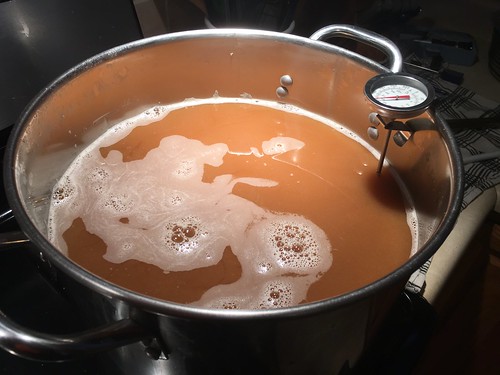 Brought the wort up to boiling and followed along with my hop schedule. Chilled it. Transferred to the carboy. Took some gravity readings (1.073). Aerated. Rehydrated some US-05 and pitched at 70°F. Took it down to the fermentation chamber to let the yeast work at 68°F and… we wait.

The lag time felt a little long (about 28 hours to see any activity3) — but once it got going, I stopped fretting. And by the time we were at +41 hours from pitching, the krausen was rocking and rolling rather vigorously. 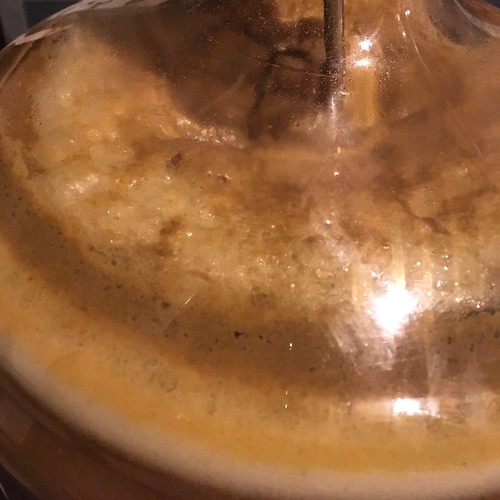 After six days, I hit it with a little bit of yeast energizer to help that gravity find its way down. Let it condition for another eleven days, taking gravity readings at 11, 14, 16, and 17 days post-pitch. When the gravity reached a stable 1.013, I fined with gelatin and cold-crashed it.

I primed with corn sugar and got a yield of 23 × 12 oz. bottles. Set it up in a warm, quiet closet and did some more waiting. 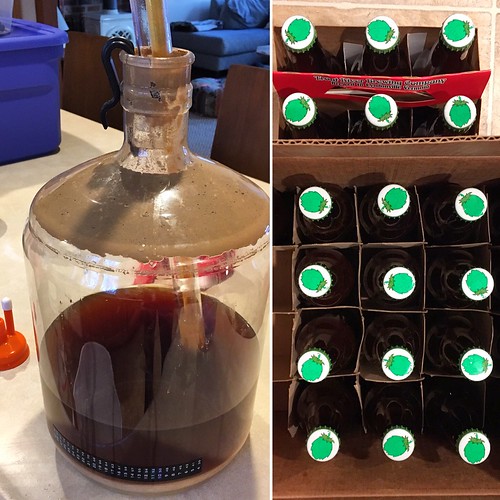 I tested the first one from this batch on January 6th: 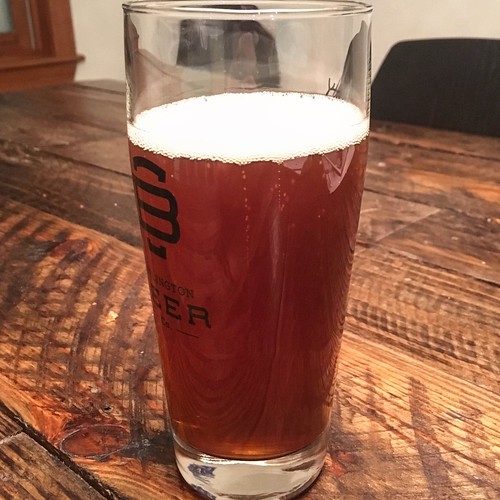 First from batch #5. I’ll be proud to send this one on to Make the Cut. Smoky and rye spicy. Great.

My brewing journal gets a little more critical and specific though:

These are, I think, fair criticisms. After all, if you’re going for the big prize, you want to bring your absolute best. But as the saying goes, you must go to competition with the beer you have.

That said, there were still about 3 weeks until that competition. Theoretically I could try to tweak the recipe and brew it again but… that wouldn’t allow enough time for the bottle conditioning; and while I might be able to force carbonate it in time, then that’s another piece of equipment to… “invest in”.

Between that first bottle and the competition drop-off, I sampled the beer a few more times.4 I also shared a couple with some friends for preliminary feedback. Reviews were positive (when aren’t they?); the smoke was definitely commented upon (“quite rauchbiery”).5

The score so far? I like it. Friends like it. It’s notably smoky, which is what I was going for — though maybe I went too far? But screw it. I’m standing behind my beer and driving it up to St. Albans for judging.

UPDATE 2/11/2016: The judges’ feedback came in the mail this afternoon! As I’d originally written in this section of this post (vide supra), my beer didn’t advance past the first round. I presume it was a tough table because the feedback seemed pretty good overall, though there were also some useful critical notes. I won’t list it all out here, but some of the highlights included:

So yeah… Judges were getting the smoke, and a few commented on the rye. Almost all commented on the mouthfeel being “full” or “mouth coating” to some degree; this suggests to me that it didn’t attenuate enough, but then again maybe it works better that way? There was some conflicting feedback (e.g., “good carbonation” vs. “not enough […] carbonation”), and it was curious that two judges commented on the “peat”.6 The most critical comment was:

Good beer but not remarkable. Wouldn’t have a 2nd at a bar.

Suggesting (to me at least) that they’d at least try it for the novelty. I can live with that.

This being my signature beer7 — I’ll definitely be brewing it again. Even without the judges’ feedback, I’d foresee the need to make a few tweaks.

First: I would boost the hops. In this formulation, I’d cut back a little bit; previous batches were perhaps over-hopped, but I hadn’t thought that I’d cut back here by that much. Did I unwittingly back myself into a chicken-and-egg problem? Did the smoke and the malt sweetness need more bitterness to balance it? I suspect so, and I’ll need to better compensate for this next time.

Second: regardless of how much hops are added back in there, the cherrywood smoked malt needs its proportion cut back a little. Perhaps 7.5% instead of 10%? Though even as I write this, I’m second-guessing that choice. Given one friend’s response, I’m beginning to believe that the smoke is in balance for a 7.9% beer, but it also needs a little longer to mature. And that’s even before considering the interaction effect of boosting the hops.

Third: boost the rye — possibly even a lot. (“You can never have too much rye.”) It isn’t so much that I want it to be extreme, but it seems to me that more of the spicy bite could help. The smoked malt should be in service of the rye.

Fourth: look again at my grist and see what tweaks I can make there to get more of a distinctly red color in the beer. As is, this Honestatis formulation is solidly in the amber/copper range but I could see how someone might think it’s a brown.8

Lastly: maybe I need to look at yeast strains other than US-05. The Mk. III batch was made with Wyeast’s 1056 and gave serviceable results — but allegedly, that’s also basically the same strain. Some of my favorite homebrews have been made with 1272 and 1332, both of which Wyeast suggests as a good fit for this style. This seems like it could potentially be a big shake-up but perhaps that’s the shot-in-the-arm that this beer needs?

(And all this even before I’ve considered the judges’ feedback!)

Am I bummed that I didn’t advance? Of course I am. Am I proud of this beer? You better believe it. Would I brew it again? You’re goddamn right I will.

The all-grain (BIAB) recipe for Honestatis (Mk. V) is as follows.