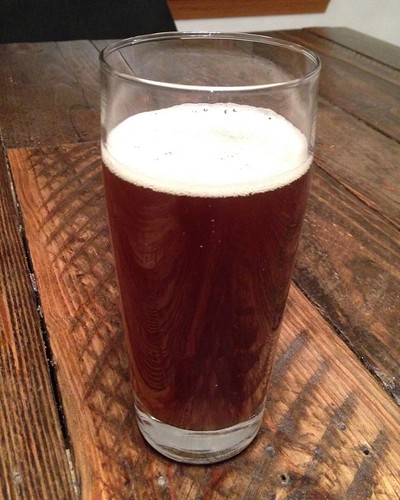 Originally, I was going to wait until early 2016 to brew the third batch. But I had a not-quite-but-basically-almost-panic moment after I unassumingly grabbed the second-to-last one that I had in my beer fridge. “Wasn’t this,” I asked myself, “the beer I was to always have around?”

As such, I got down to the business of figuring out what iteration 3 of this would-be signature beer was going to look like. The first tweak I decided to make was that I needed to get back to the recipe’s roots; it was never meant to be a “big” or even a “biggish” beer1 and so why not see if I could make the 1.054 I’d always intended?2 The second choice was to go partial mash; that had worked out well for the past couple beers, and it felt more… pure? Regardless, it made sense. Decisions first and second led to some small tweaks in the grain bill. But those I don’t count as “third” because they fell out naturally from those other two decisions. As such, the malt ingredients remained mostly the same; it’s the proportions that shifted slightly:

And then the extracts to round out what was needed for the target gravity. That said, thirdly I wanted to change up the hops a bit. It wasn’t so much that Fuggles disappointed me as they hadn’t impressed me. I kept the Galena3 but decided that Willamette at flame-out was the way to go. And that was supposed to be it for changes… but The Universe had a fourth tweak in store for me: no US-05 at the HBS; I had to go with Wyeast 1056 American Ale yeast.

And so that sets the stage. 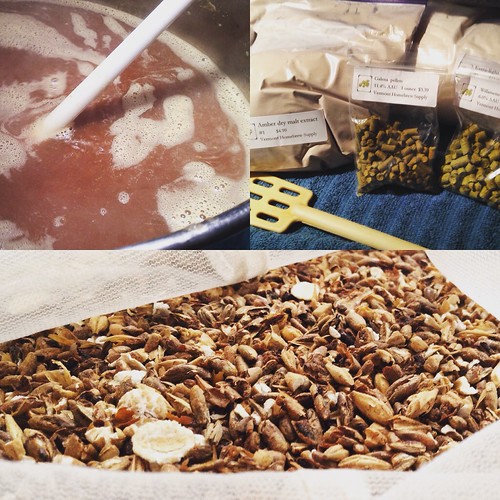 Fast forward two weeks and (yawn) racked from primary to secondary. Gravity had come down to 1.015 — right where BeerSmith estimated it would finish. 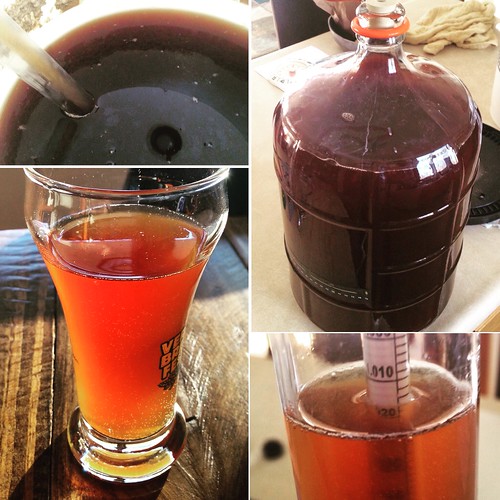 Another two weeks in the carboy to let things clarify and condition. Bottling day arrived. Gravity hadn’t budged (not that I expected it to) and we filled up 9 × 1 pint flip-top bottles, and another 37 × 12 oz. bottles — a 4.6 gallon yield.5 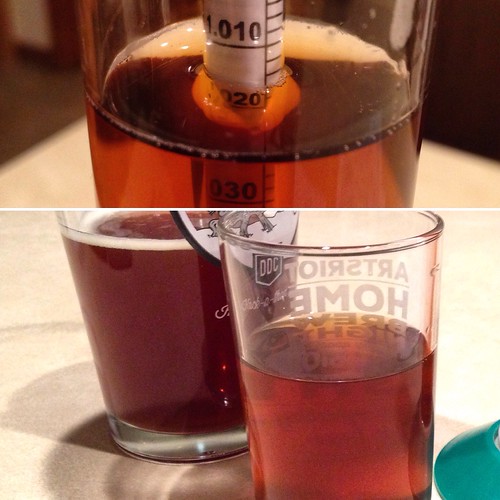 As for how it turned out?

On bottling day, I was concerned about it. There was an off-flavor that I couldn’t quite place, one that I usually associate with wheat beers. It wasn’t so much that it was bad, but that it wasn’t quite what I expected, and didn’t sing out with the same flavor as earlier tasting samples from this batch. A little bottle conditioning will do it some good, I said to myself.

Luckily, this turned out to be (mostly) true. I sampled the first “finished” beer about a week into the carbonation/bottle conditioning phase. It definitely needed some more time to get the bubbles going, but that off-flavor I’d been concerned about had cleared up. Seemed about right, but I didn’t want to jump to any conclusions.

A week later, carbonation had more or less finished up — not quite the head I was looking for, but some decently vigorous bubbles. The color was great; clarity was also pretty good, though not quite the “clear” that would be perfect.6 From an aroma perspective, it’s fairly mild — some mild esters (more on that in a moment) and a vaguely pungent earthy/spicy undertone from the late-addition Willamette hops. The flavor and mouthfeel… Well, to borrow from Chuck Palahniuk, “disappointed” isn’t the right word, but it’s the first word that comes to mind.

Mouthfeel is a little bit thinner and lighter than I’d thought it would be — not that I was going for something “oily” or “mouth-coating” or “heavy”, but this batch has almost no cling at all. Flavor-wise… it’s a good flavor, but considering that I was originally going for something that “hinted at smoke and spicy rye, with something earthy as its base” then it’s easy to conclude that I veered off-course. There are some spicy rye notes, and there are some earthy hop notes, but the smoky flavor I’d hoped to achieve with the smoked malts seems absent, even at 8% of the overall fermentables.

Instead, I seem to get this markedly sweet ester that hints at cherry — which, okay, the smoked malts are cherrywood smoked, but that shouldn’t actually result in a cherry flavor, should it? Similar notes had been cited by Dan Sartwell in batch #2, but again… where could that be coming from? The yeast? Batch #2 was US-05 fermented around 70°F; batch #3 was (again) Wyeast 1056 fermented around 68°F — both right in the middle of their respective ranges, and neither noted as having particularly strong esters. So… where does that come from?

Again… not that the flavor is bad, but that I may not quite have (shall we say?) “stuck the landing” quite yet. Regardless: tastes good, and I won’t have any trouble drinking what I’ve made here.

As for next time? Likely more rye, more cherry-smoked malt; swap out some of the extract for base malts, perhaps convert to a 3-gallon all-grain BIAB recipe. Maybe a little more Galena to up the bitterness. Oh… and I think I like it better as a 7% beer after all.

The partial mash recipe for Honestatis (Mk. III) is as follows.