Since the bottles from batch #5 went so quickly, I was… forced to brew this again. And apply the lessons learned from the judges’ feedback. Honestatis (Mk. VI), my extra amber ale: 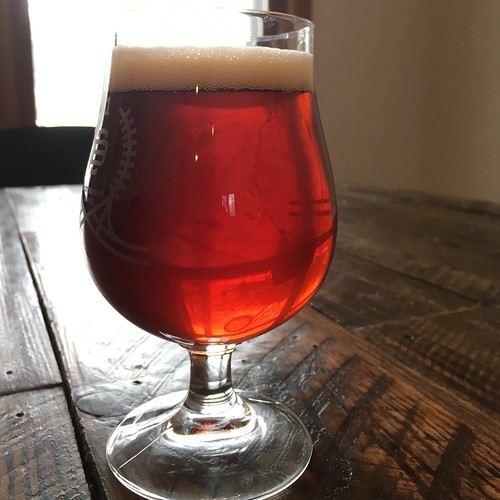 I began on this brew basically as soon as the Make the Cut judging feedback arrived in the mail. This being my house favorite, I knew I was going to be brewing it again, but it was good to get some impartial feedback. A lot of what came back overlapped with my own impressions, and that reaffirmed the shape that the re-formulation was taking.

Meanwhile, I backed off of my choice to reduce the proportion of smoked malt.1

The tricky part going into brew day was going to be figuring out the water/grist ratio. Just using the BIAB profile from BeerSmith was going to get me into trouble — I would overflow my poor little kettle after mashing in. I looked back over a few previous formulations and ran the numbers to see if I could make this work from a volume perspective. A ratio around 1.4 qt./lb. would just barely allow me to mash all those grains without spilling over. I wasn’t quite sure what this would mean for my extraction and/or efficiency but I also felt the need to move ahead.

I got my strike water going on the burner that morning and heated it to 159.1°F, mashing in and starting the saccharification rest at 152.1°F and a pH of about 5.55. I let that go for about 90 minutes, all the time shaking my head at how stupidly full this kettle was. Just shy of 14.8 quarts and then 10.5 lb. of grain. 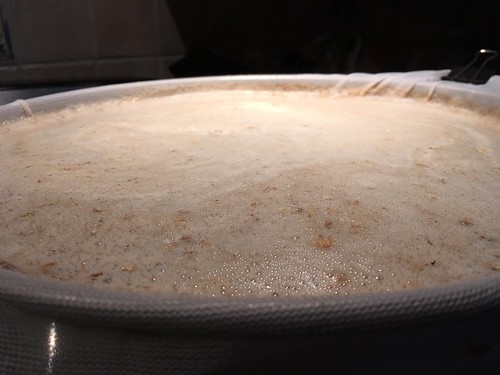 At the end of the rest, my refractometer read 13.2%Br (1.051). After removing the bag and squeeeeeeeezing as much wort from it as I could, that same instrument gave me 19.2%Br (1.075) but I was about a half gallon shy of my target pre-boil volume. I rinsed the grain bag (“faux sparge”) with that half gallon of water yielding some 5.8%Br (1.022) wort that I could use for dilution/top-off. According to BeerSmith, this would yield a pre-boil gravity of 1.067; my actual reading was 16.5%Br (1.064). Close enough to move ahead. And anyway, manhandling a wet grain bag that started as 10.5 lb. was getting tiresome. 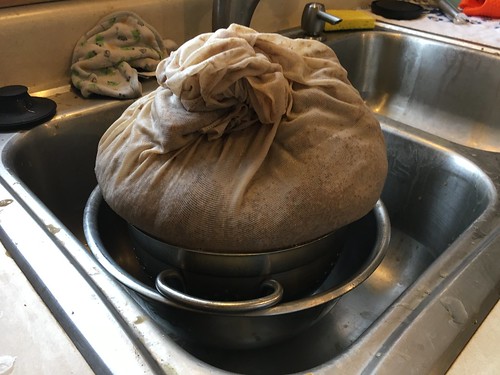 The boiling and hopping part went as usual. No surprises. So, you know: basically the boring part.

Where things got a little interesting is with the whirlpool hops. In previous batches, I’d added them at flame-out and stirred. This time around, I chilled the wort down to 170°F before add the 2 oz. Willamette. After the five minutes was up, I resumed chilling, bringing it down to 67°F before transferring to the carboy.

The boil yielded about 2.75 gallons of wort that the refractometer measured as 29.4%Br (1.120). To get to my target fermentor volume would require 2.25 gallons of water, but BeerSmith’s dilution tool estimated my wort would be 1.066. That would still be decent, but it wasn’t the 1.074 I had targeted. I thought it over and decided to follow my “usual” rubric and favor batch size over gravity. And that’s what I did — I added the 2.25 gallons to the carboy, then transferred the wort from the kettle to get my full 5 gallons. My hydrometer reading confirmed the software estimates: 1.066 after temperature calibration and offset adjustments.2 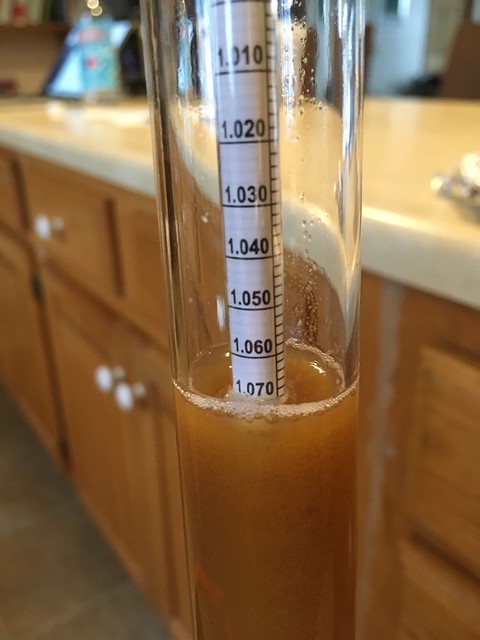 After that, I pitched my yeast (250 ml of slurry harvested from Younger Sister just two days prior) and set up the carboy in the fermentation chamber at 67°F (±2°F). 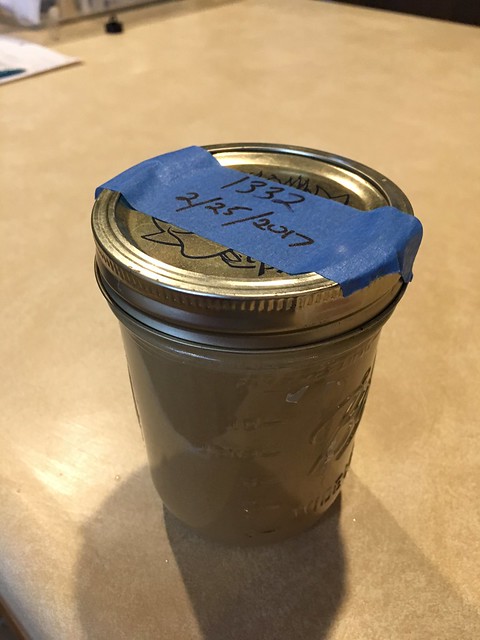 It was really only a few hours before my first fear was allayed. I had worried that my first attempt at yeast harvesting was going to yield nothing but junk and I’d be sitting on wort that was doing nothing. Instead, the morning after pitching, I spied through the glass of the carboy that a layer of krausen was already forming, and bubbles were happily gurgling away in the blow-off bucket. By the time we were +40 from pitching… 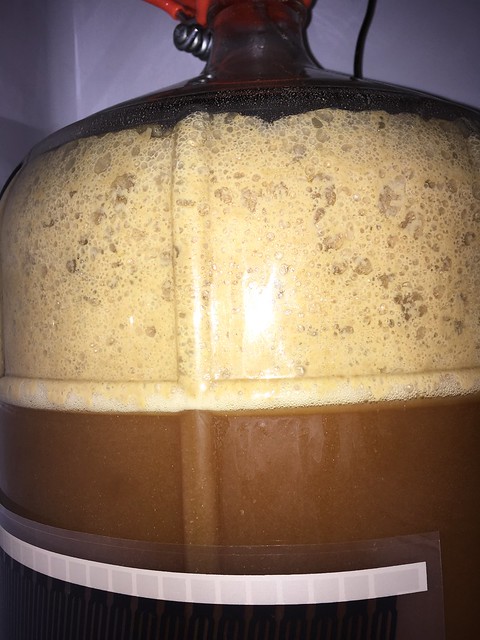 A few hours later, I observed something I’d never seen before: “burps” in the blow-off bucket. I don’t know how else to describe it. I’d gone downstairs to (neurotically) check on how things were going in the fermentation chamber. As I listened to the bubbles in the bucket, they seemed slow. Then they started to speed up. Then they sped up even more. Then: BURP! One big ol’ bubble. Weird!

Another day or so and I bumped the fermentation chamber’s set temperature to 70°F (±2), as well as a shot of 2½ tsp. yeast energizer. I let this run for a few more days again before I started taking gravity readings, 2-3 days apart each. The final gravity settled at 1.015. It was time to fine, cold crash, and package.

First, I started the cold crash. I dropped the temperature in the fermentation chamber to 35°F for about 24 hours. Next, I mixed up some gelatin to use as a fining (following Brülosophy’s method) and held the temperature in the fermentation chamber steady. I let the fining do its magic on the beer for two days, then I racked it over to a keg. And took a small sample to see how it was tasting… 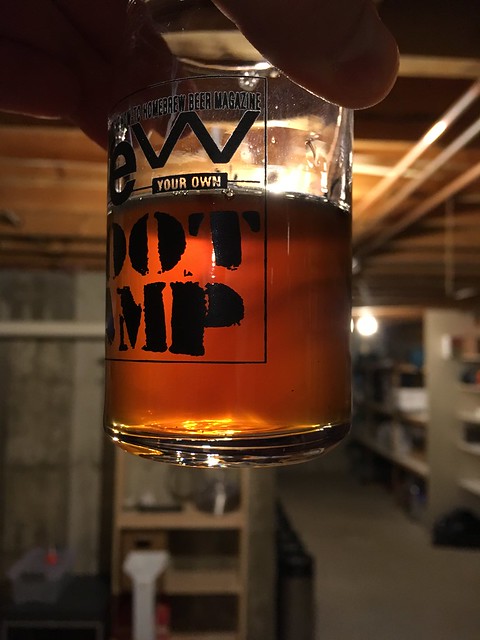 I used my CO₂ tank to purge any oxygen from the headspace and stashed the keg in my beer fridge for a few days before space freed up in my kegerator. And then I got it on the gas and followed my force carbonation protocol. It would soon be time to taste this batch and see if it lived up to my hopes…

Batch #4 was “very close to perfect”, and while batch #5 was good, it also coulda-shoulda-woulda been better than that and maybe-just-maybe I pulled too many levers at once.3 So I took Mk. V’s lessons learned, and applied them creatively to the Mk. IV formulation. 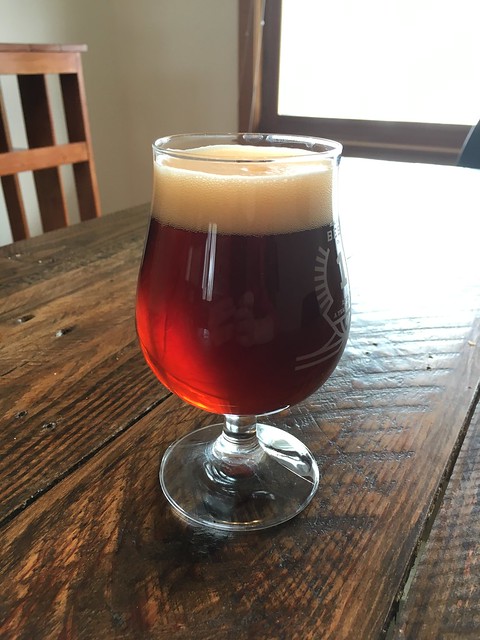 The results, I believe, were outstanding. This batch is hands-down the clearest yet, and has the best deep red color. Smoke and rye spice dominate the aroma. The flavor profile is malt-forward inasmuch as it has strong rye notes (spicy, very slightly grainy) with the smoky notes playing a supporting role, giving it some depth and complexity; the caramel malts provide just a touch of sweetness to balance out what’s otherwise a pretty dry beer. Hops don’t contribute that much to the aroma (low amounts of earthy and peppery-floral undertones) but provide a good amount of bitterness to balance the malt. Mouthfeel is moderately dry and smooth. I would have liked it to be just a wee bit stronger from an ABV perspective, but otherwise I couldn’t be happier with the results.

So very pleased with these results. When I go to make batch #7… I don’t believe that I’ll make any changes at all.

The partial mash (BIAB) recipe for Honestatis (Mk. VI) is as follows.