For the past few months, I’d been idly kicking around the idea of doing a series of single hop pale ale experiments. I slapped together a few formulations, but there was no over-arching theme other than the fact that each one only used a single hop type. After thinking it over, I deleted all of the formulations (about a half-dozen) and started over. I kept the list of hops, but I went back to the drawing board and sketched out a simple grist that could provide a flavorful backdrop to a number of different hops. Satisfied with how it looked on paper, I moved ahead with the first one: Prosody (El Dorado) 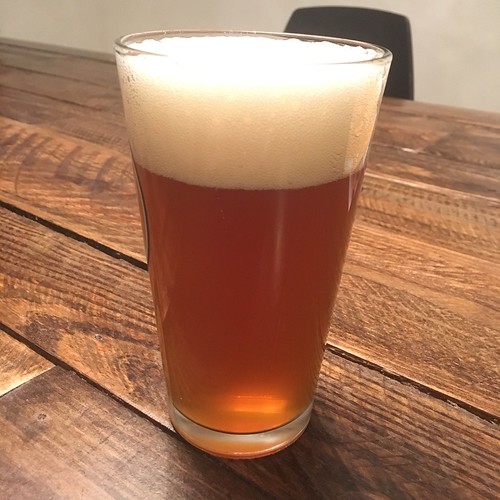 I felt that was a suitable name to give to my single hop APA project. After all, the malt backbone could provide the basis, and the hops themselves could be given plenty of room to sing, to be that “stress and intonation” — to fill up the beer with their aromas and flavors. And El Dorado seemed to me like the first hop to use. 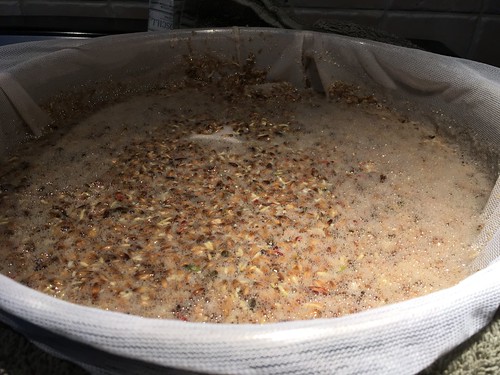 Boiled 60 minutes, following my hop schedule, and late addition of DME. Chilled to 150°F and did a 5 minute whirlpool/hop stand with 2 oz. of El Dorado. Then I finished chilling the wort the rest of the way down to 65°F. After boiling and chilling, I had about 2.9 gallons of wort sitting at 22.6%Br (1.090). I added 2.1 gallons of top-off water to the fermentor and poured over my wort.3 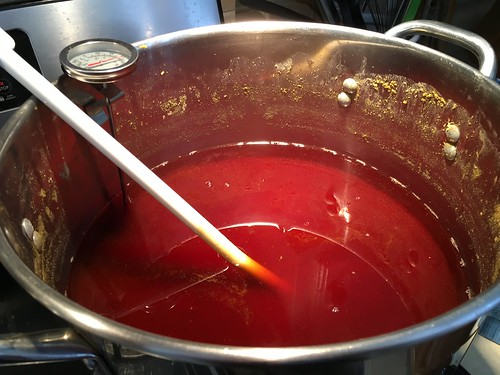 In the fermentor was just shy of 5 gallons. I took a hydrometer reading to validate BeerSmith’s estimated gravity after the dilution. They did not agree. After temperature calibration and offset adjustments, the wort was 1.056 — 2 points above my target rather than the 2 points below the estimate. (Perhaps the refractometer is due for a recalibration?) With that knowledge, I added just a little more water, re-measured the gravity, and called it a success at 1.054. 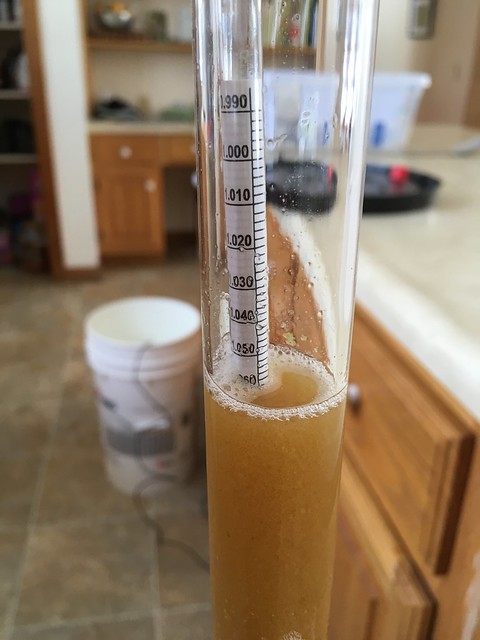 To finish up brew day,4 I shook the fermentor again to aerate, and pitched approximately 180 ml of slurry from generation #2 of the 1332 yeast.5

There’s actually… not much to tell on the fermentation front? After pitching, I observed it bubbling away for four days at 67°F and then ramped it up to 70°F. I let it go at that temperature for 8 more days before it reached it’s final gravity (1.011) after which I took small sample to taste, cold crashed it, and fined it with gelatin. 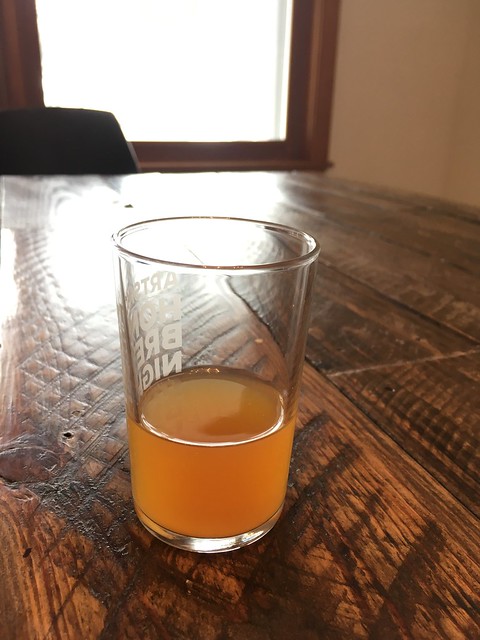 After a couple of days at 35°F and with the finings in play, I pulled the carboy out of the fermentation chamber and let it rest for another day or two. Observed: the finings dropped a lot of gunk out of the beer. 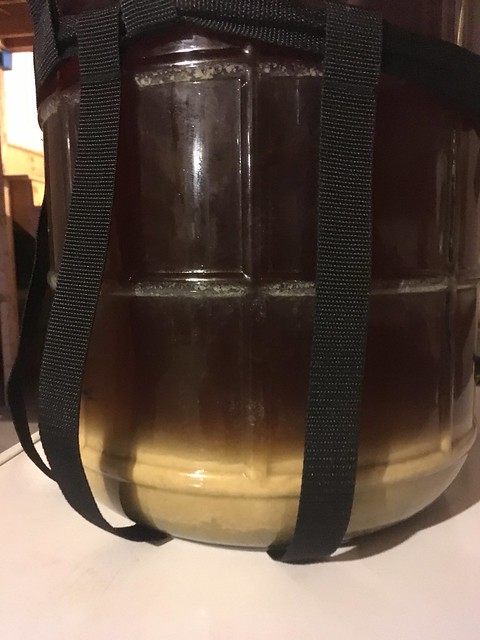 Then I packaged the beer, priming with 3.9 oz. of corn sugar. I filled 46 × 12 oz. bottles and socked those away in a warm closet for a couple weeks.

Where to begin with evaluating this beer? On its own merits? The centerpiece hop by itself? The grist that provides the basis for the others in the series? Perhaps all of those aspects at the same time? 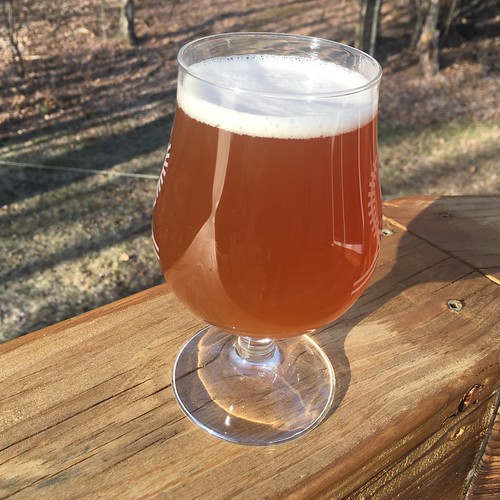 First of all, the beer on its own merits is a very drinkable APA. It’s recognizably a beer.6 It’s hop-forward without being overly hoppy. It has a decent malt backbone. It has excellent aromas, a pleasing palate, and great color. It could stand to have clarified a bit more, and I wonder if it would benefit from dry hopping — but otherwise I’m very happy with how it turned out.

What about the El Dorado hop itself? In a word: it’s wonderful. It provided a fair amount of bittering with a smooth quality. It’s flavorful on the tongue — candy and peach, hints of pear and honeydew, maybe the slightest suggestion of mango. And these notes are even better from an aroma perspective, especially the candy and peach. And it’s that point about the aroma that makes me wonder if this beer would have benefited from a round of dry hopping. As formulated, the beer came together nicely; it seems well-balanced, and the aromatics are quite nice. But could they have been nicer? stronger? if I’d dropped two ounces or so of El Dorado into the carboy for a couple days before packaging. This is a tough one to know for sure. I suspect dry hopping would have helped both the nose and the palate — but I’m not going to lose any sleep over my decision not to.

Lastly: how about that grist? Again, the idea behind “The Prosody Project” is to provide a decent APA that rotates through a single hop with each brew, to really showcase what that hop varietal has to offer. Reflecting on how this beer turned out, I would say that the fermentables worked out. At these proportions, the 40L provides just a little caramel sweetness and the right amount of color without overpowering the rest; the wheat helps with head retention and/but maybe adds just a touch of graininess which might actually be just fine; and then the late addition DME — I just need to figure out how to translate that into an all-grain batch and I should be off to those particular races. In other words, this grist seems like it will work out just fine for future batches and I’m unlikely to mess around with it unless there’s a very good reason.

A couple of key take-aways for myself from this batch.

First, don’t count so much on the IBU contributions from those sub-150°F hop stands. It wasn’t so much that I wanted this APA to be a lot more bitter — but a little more bitterness would have helped with the overall balance. In other words: “It’s good, but I know how it could be better.”

Second, the dry hopping question comes up. Again. So soon. I believe my original formulation had called for dry hopping this beer. But I’d also been reading a bunch about how a sub-150°F hop stand could do as-good a job (or better!?) and with a lot less mess. (Let’s not fool ourselves here, OK? Dry hopping can get quite messy.) Future beers in this series are likely to get dry hopped. But we’ll see.

Lastly… my experience with Honestatis (Mk. VI) made me a believer in cold-crashing and fining. And there’s no reason that shouldn’t have worked here. Except for the part where I got careless while racking it into the bottling bucket. I’ve got to own that mistake and be vigilant next time around.

The partial mash (BIAB) recipe for Prosody (El Dorado) is as follows.