Where do we begin when we tell the story of this single hop Calypso IPL? The obvious place would be “at the beginning” — but I’m not sure where that is. Originally, Calypso was a candidate for my “Prosody” single hop project (see also: Homebrew #33: Prosody (El Dorado)). But I had this nagging feeling that I needed to do more lager beers. Our “Experimental Vermont Brew Crew” Facebook group launched into a thread about which “new” and/or “interesting” hops we should explore (sound familiar?); Calypso was one of two that survived the discussion to become a planned brew day. A couple of us converged around the idea of using it for an IPL. Hence… Calypsonian. 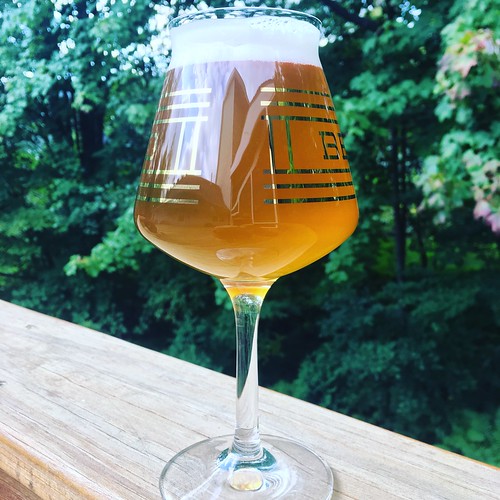 We tried to keep things pretty simple. Some pale ale malt (26 lb.), about half as much pilsner malt (11 lb.), and a little Munich Dark for color (1 lb.). A single infusion (BIAB) mash. A 60 minute boil. With Calypso being sufficiently high alpha (i.e., 14.7%AA) it was easy enough to just say “single hop” and be done with it.

We ordered our hops, bought our grain, and lined up everything else to move ahead with our brew day, which would be a maiden voyage for my friend Dan’s new system. The real open-ended question left was: How do you dry hop an IPL? But plenty of time to figure that out, right?

We got started that morning, grains milled the day before, and mashed in at 153°F, holding that for 60 minutes. 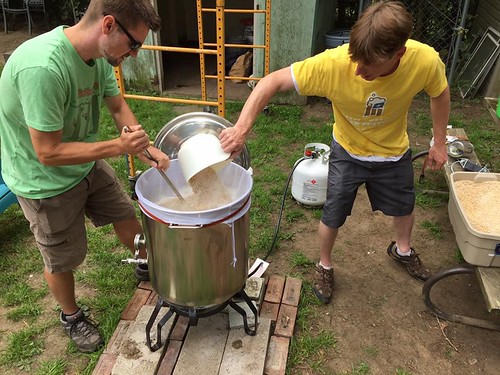 While the enzymes were doing their thing, we portioned out the first wort and boil hops, and assembled the scaffolding. Yes, scaffolding — for the BIAB bag lift. 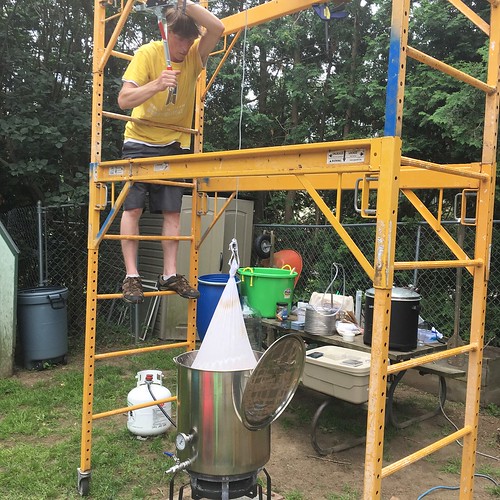 We did a little faux sparging, rinsing the grain bag with jugs of water until we got up to our pre-boil volume (approx. 20 gallons). The post-mash gravity was reading 1.067 — significantly higher than the 1.053 that BeerSmith had estimated.

Nevertheless, we moved ahead with our boil (60 minutes) and chilling. Original gravity turned out to be 1.074 — again, rather above the 1.061 that BeerSmith had estimated. From there, we portioned out the wort, and took it home to pitch. 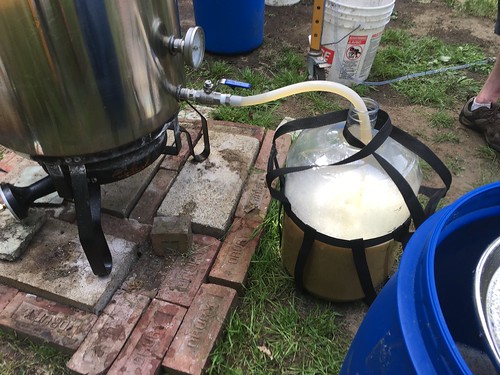 It took another five hours in the fermentation chamber, but the wort came down to my desired pitching temperature of 50°F. So I pitched the 400 mL or so of slurry from my big-as-possible starter, setting my controller to 52±1°F. Ten hours later, I had activity in the blow-off bucket. At +39, I had appreciable krausen. 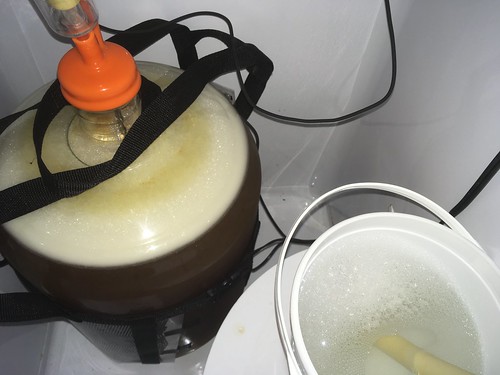 After a week of steady bubbles, I took my first gravity reading: 1.035. I ramped the temperature to 54±1°F. A week later and the gravity had come down to 1.018. BeerSmith had estimated 1.016 as the F.G., so I thought close enough!1 and decided that, given the need to free up the chamber for Medusa anyway… it was time for a diacetyl rest and then to rack the beer to secondary for lagering.

First step: swap the blow-off tube for a regular airlock. Second, I brought the carboy out of the fermentation chamber and warmed it up to 68°F (the basement’s ambient temperature) for that diacetyl rest. Three days like that and I checked the gravity again (1.014) and racked it into secondary, onto the dry hops, and stowed it in the refrigerator to lager at 40°F. 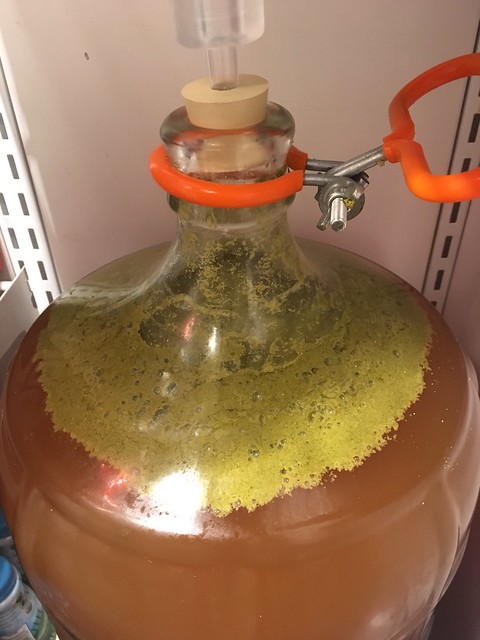 Brief Aside About Dry Hop Times

The specific nitty-gritty details of my approach to dry hopping seem to change from batch to batch as I try to optimize the balance between aroma, flavor, appearance and clarity, cost and quantity, convenience, and clean-up. One thing that has remained (fairly) constant though: dry hop for the three days prior to packaging (possibly inserting a day or two in there to cold-crash and/or fine).

But this “three days” rule was also largely predicated on a warm (e.g., 66-72°F) dry hop schedule. So (as I alluded to earlier) what was I to do with a lager beer? Lager it then warm it up for the dry hopping? That seemed unwise. What about dry hopping it during the diacetyl rest? That seemed like a waste — like any added aromatics would degrade before we had the benefit of lagering.

I was hesitant to dry hop cold (i.e., during the lager) because everything I’d read indicated that temperature played a role in the transfer of the aromatic compounds. But, as I alluded to above, there didn’t seem to be a “good” alternative for a “regular” (slash) “warm” dry hop. A cool dry hop would take longer, but (again) everything I’d read indicated that a long dry hop could result in grassy or vegetal off-flavors coming across.

BUT what if a long cold dry hop was the best of both worlds?

Re-winding the tape back to Wookiee (Mk. II), I had some data on this! Recall that I keg hopped that beer. And I keep my kegerator at roughly 40°F. And I knew that it was about 25 days after originally keg hopping that beer that I started to get those grassy notes — albeit subtly.

So I rolled the dice on the cold dry hop schedule. When I racked into secondary for lagering, I racked right onto the dry hops. I would give it 2-3 weeks. That should (I believed) give it enough time for the dry hops to impart their volatiles, but not so long that they also leave behind a grassy or vegetal aroma or flavor.

About two and a half weeks after lagering began, I decided to get the beer off the dry hops and into the keg. I’d just packaged up the Medusa, so getting this beer force carbonated was likely to be delayed a little bit. Nevertheless… 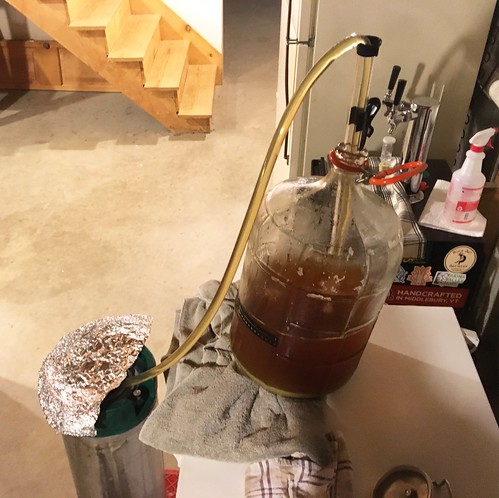 And that night I took one more gravity reading to be sure. And sure enough… 1.012 — it had come down another two points. (Aside: the sample tasted great, but let’s hold on that for just a second.)

I was prepared to sit tight on this one for a while (patience &c.) but then another friend was all like “Hey I’ve got a QuickCarb so why don’t you bring that over and we can run that while we do our BJCP study group?”

A lovely beer. I love it. It’s lovable. 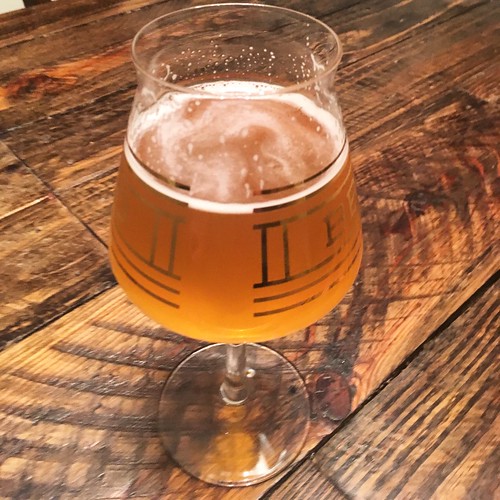 AROMA. Hop-forward, with lots of bright fruit notes. Lime, tangerine, kiwi, pear, mango, pineapple (roughly in that order). Malt aromas are low but suggestive of biscuit. I come back around to that pear note and wonder: low-level esters? But I don’t perceive DMS, nor diacetyl.

OVERALL IMPRESSION? Hop-forward with semi-sweet malts and a dry finish; very pleasing to drink. The beer is stronger than perceptions let on; not sure if that is good or bad. I would like it to be just a little bit drier. While “IPL” is a loose and poorly defined style, I believe its balance should be a little more bitter; lowering the O.G. or raising the IBU would help with that here. I would also consider some water treatments to enhance bitterness (e.g., gypsum for sulfates). I’m on the fence about whether to lager it for longer, but if I did, I would probably lager it for 1-2 weeks before adding the dry hops, and then maybe fine with gelatin 12-24 hours before packaging.

But after all that, and as I told Dan: “Just because I’m critical doesn’t mean I don’t love it.”

The all-grain (BIAB) recipe for Calypsonian is as follows: