Blame Aaron. A Facebook thread talking through which “new” and/or “interesting” hops to showcase in an up-coming brew spawned not one but two big brew days. On the one hand: Calypso; and on the other… Humulus lupulus var. neomexicanus — the wild North American varietal otherwise known as Medusa. 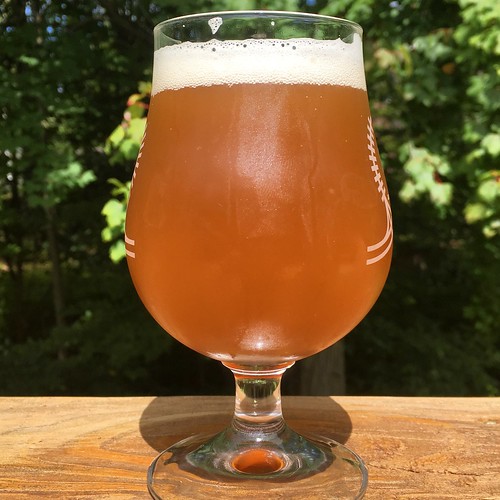 I couldn’t say no. Burlington Beer Co.’s single hop take on Medusa was a late-Spring favorite of mine. All that bold melon and key lime and tangerine… A beer that highlighted this hop needed to happen.

We got to work on a formulation. Something in “the New England style” — hazy and hoppy, “juicy”, with that soft mouthfeel. A few of us developed recipes, trading notes back and forth until we settled on something we all agreed would work.

A pretty straightforward grain bill, it turned out: 90% pale malt, 7% Munich I, and 3% wheat malt. Given Medusa’s low alpha acid content, we decided against making it a single hop; we would use Magnum to get the bitterness level we wanted, then add the first round of Medusa as a late addition, then a ton of Medusa in the whirlpool, and then dry hop the hell out of it. Specific yeast strains were up to the individual co-brewers, but most agreed that London III was a great fit.

Aaron and I got the early start, collecting and adjusting the water (see also: brew day Bru’n Water sheet), and mashing in at 151°F. The mega-BIAB batch had a 60 minute saccharification rest. 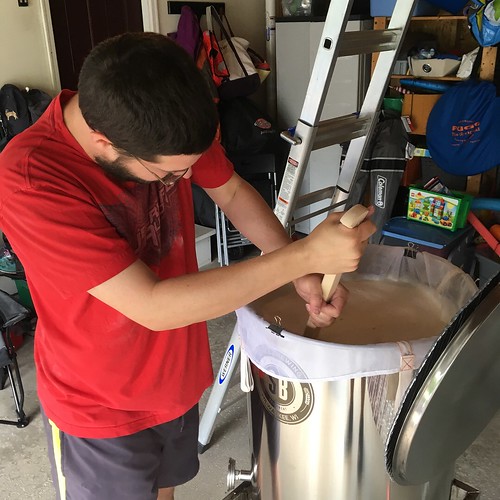 We pulled the bag and sparged up to our 27 gallon pre-boil volume. 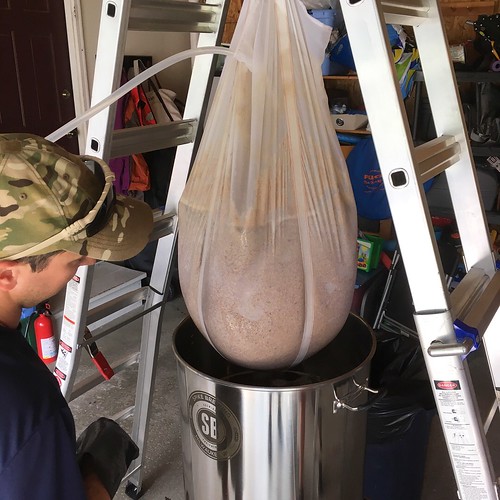 We rocked a 60 minute boil, with the Magnum addition at 60, the first Medusa at 5, and then a 15 minute whirlpool (with Aaron’s new toy1) addition of Medusa once we’d dropped the temperature to 145°F. 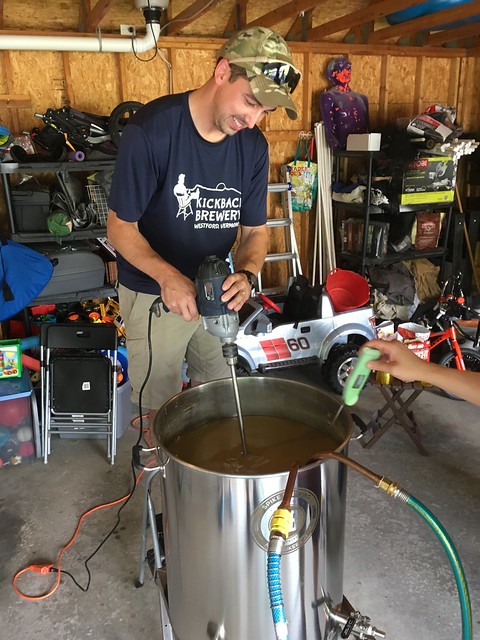 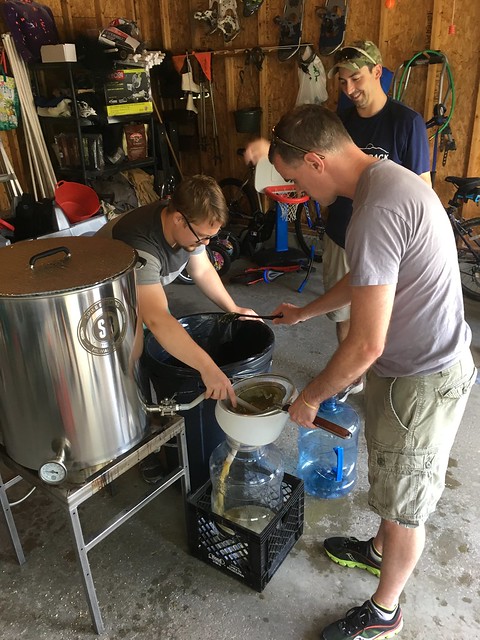 Later that night, I pitched from my starter of Wyeast 1318 London III. As has become my custom, I’d over-built the starter, decanted off the supernatant, harvested 400 mL, and pitched the rest. I set my temperature controller to 67±1°F and by +21 hours, I had a nice big, healthy-looking krausen. 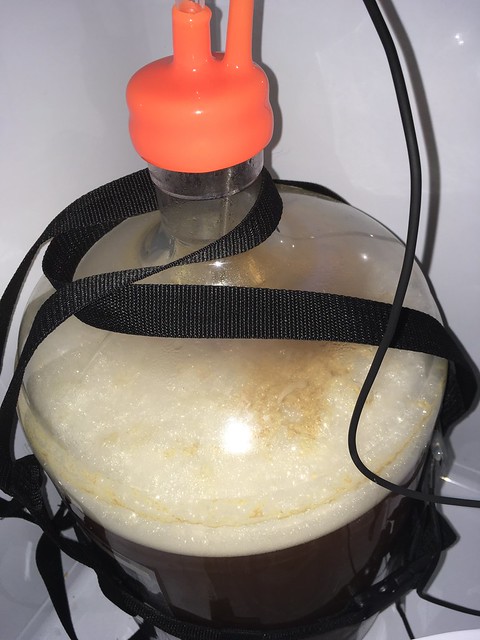 For the most part, the fermentation ran its course rather nicely. I’d never fermented with this strain before, and though I’d heard plenty of good things, I found that… while I wouldn’t go so far as to say that it stalled, it did seem to take a few days longer to reach terminal gravity than it did for my co-brewers. Nevertheless, just shy of two weeks, the gravity reading suggested it was plenty close to where I should expect it to be, and I added the dry hops. 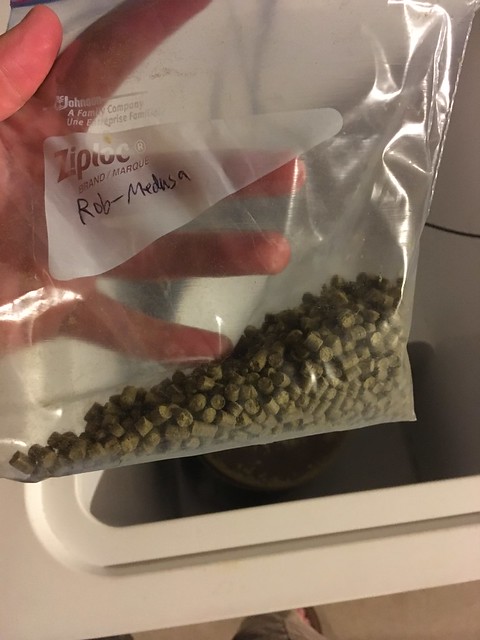 I let the beer condition on those dry hops for 3 days before packaging. Giving in to my impatience, I did a quick crash — dropping the fermentation chamber temperature to 32°F and letting it rest for about 12 hours. That night, I took a sample, performed a final gravity reading, and kegged it. 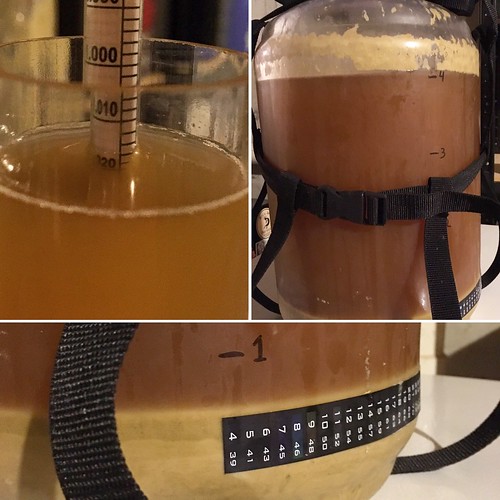 After temperature calibration and offset adjustments, my final gravity was 1.011. I set the CO₂ regulator to approximately 24 PSI (per my protocol) and force carbonated for two days before dropping the pressure and pulling the first sample.

A Brief Aside About Intense Aromas

After kegging the beer, I brought the carboy upstairs to clean it. My 5 year old, who we affectionately refer to as “the fruit monster” (because of his predilection for fruit), came running into the kitchen from the other room, LEGOs in hand. “Are you making watermelon?” he asked, his nose sniffing through the air. I took a whiff from the dirty carboy — yeast cake and hop matter just emanating melon and lime and tropical fruit aromas. “Is it this?” I asked him. He looked at me skeptically. He sniffed the carboy. He furrowed his brow. “Smells like watermelon,” he muttered, disappointment creeping into his voice.

The first pour needed just a little more carbonation but (having come back to it a few days later) — I can attest that it lived up to its promise. 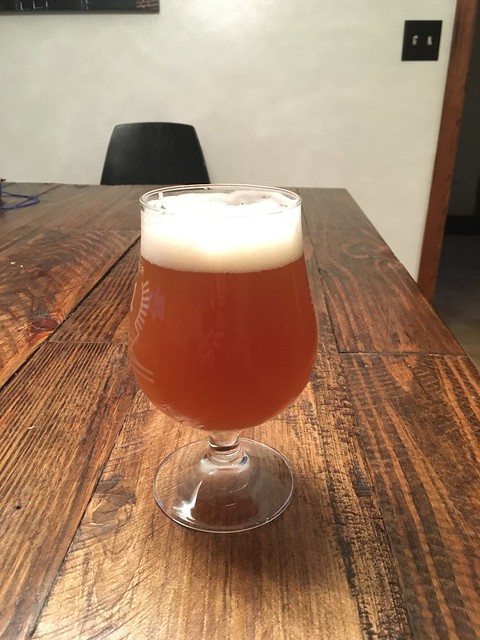 AROMA. Ripe melon. Melon and lime flesh and lime zest and tangerine. Malts are in the background; a little bready, a little sweet. Light touch of esters. But those hops go on for days; everything is subordinate to them.

FLAVOR. Follows the aromas. Hop-forward, with fruity flavors throughout. Melon and lime and tangerine, hints of soft tropical fruits (especially papaya and mango). Delicate malt backbone, more biscuit than bread on the palate. Balance leans to bitterness, but not aggressively so. Suggestions of creamy sweetness retronasally.

MOUTHFEEL. Medium body with a fine carbonation, but with a rich quality that suggests a greater fullness. Silky and creamy. No astringency.

Overall? We really brought together an outstanding beer that nicely showcases the hops. We had almost instant gratification, too. Yakima Valley Hops asked for the recipe. And the beer took second in the Standard IPA category at the 2017 Champlain Valley Fair’s homebrew competition. We’re also gearing up to do a presentation on neomexicanus (and samplings, of course) at the next Green Mountain Mashers club meeting. The hard part will be restraining myself from drinking it all before then…

Changes for next time? Probably just tweaks, and even then mostly in the water profile. The majority of the aroma came (I believe) from the dry hopping. I’d probably use half as much Medusa in the whirlpool, but a comparable amount of dry hops. London III worked well enough for the fermentation, but I’m a fan of 1332 (Northwest Ale) and would be curious how well that works. This was also the first time our “Experimental Vermont Brew Crew” did any specific water treatments aside from filtering. I have a sneaking suspicion that the retronasal “creamy sweetness” is from a slightly-too-high level of calcium, from the calcium chloride. That “creamy” mouthfeel is nice, but it’s a little distracting when it gives a “milky” flavor impression. I’m new to the water adjustments though, so that’s all just a hunch.

UPDATE: (9/13/2017) Aaron and I presented about this hop and this brew day at the September 2017 Green Mountain Mashers club meeting. Slides are here: Brewing Medusa

The all-grain (BIAB) recipe for Medusa APA is as follows (cribbed and interpreted from Aaron’s original recipe):

Starting with the Champlain Water District profile as a base, filter (dechlorinate) and adjust: