It was late September, and we were waiting for fall to finally (finally) make its presence known. At the first hint that the leaves might finally change color and drop, that the Vermont thermostat might finally turn down to “chilly”… I took an inventory of what I had in my brewing backlog. I was staring down a New Zealand Pilsner, another batch of Honestatis, and a honey porter which, while seasonally appropriate, was also calling for some wood-aging. My kegs were empty, and while I’d soon have plenty of that Motueka, things were otherwise looking… like slim pickings. The NZ Pilsner would take a while, as would the honey porter. And while Honestatis could get turned around reasonably quickly, there were… complications and/or collaborations to be considered. Then it dawned on me that an oatmeal stout would be perfect. A typo or two later and Otaku Supper took shape: 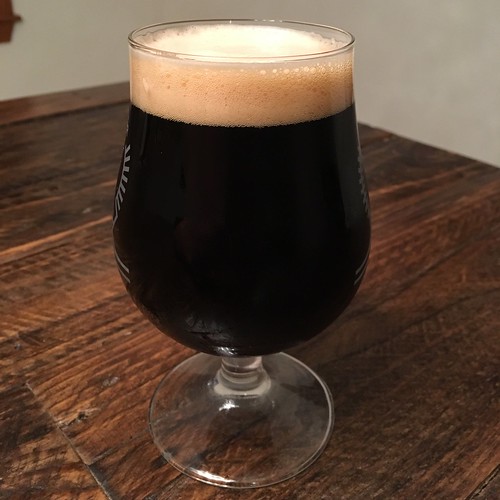 About that “typo or two”… I’d gone through a couple of formulations, but kept coming back to this one by Josh Weikert. I looked over the formulation I’d developed on my own and compared it to his; I made a few tweaks for alignment’s sake, and additional adjustments with respect to my partial mash process. Then I went to type in a few more notes, but every time I went to type the “oat” in “oatmeal” it came out as “ota” which my brain filled in as “otaku”. I had some nostalgic flashbacks to college, and to the Otaku Soundsystem collective of DJs I played with,1 and the “family dinners” from that same time. My brain turned “Oatmeal Stout” into “Otaku Supper” and it just seemed right.

I had about 50 mL or so of 1318 London III slurry left over from the over-built starter for the Medusa APA, so I got a 1500 mL starter going for that the day before. 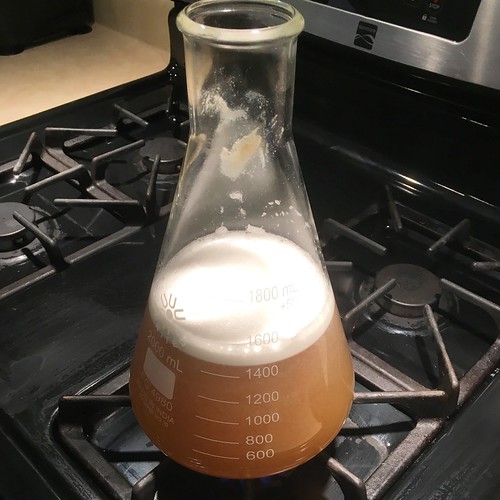 I prepared the brewing liquor the night before, modifying the water according to the “Black Balanced” profile adjustments in this Bru’n Water spreadsheet. 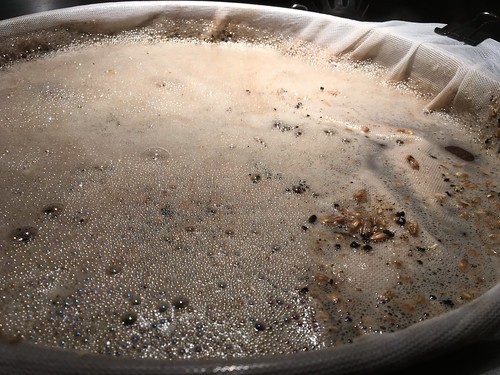 Once the wort was boiling, I followed along with my hopping schedule, including adding the LME as a 15 minute late addition. 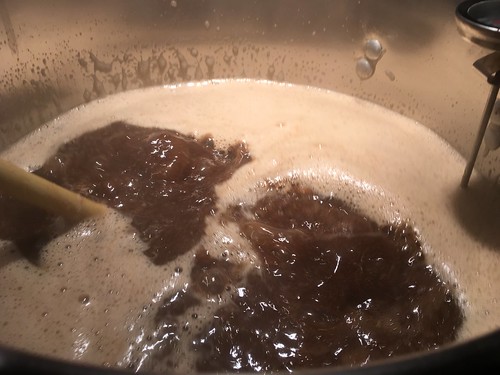 After the boil, I chilled the wort down to 75°F (no fancy whirlpools or hop stands this time), and did my post-boil science. The refactometer gave me 25.6%Br (1.103) with a volume of about 2.9 gallons. BeerSmith estimated a gravity of 1.061 after diluting with the 2 gallons of prepped top-up water. This seemed about right to me, so that’s what I did. I mixed and shook the wort for about 60 seconds to get it good and combined. Then the hydrometer reading gave me… 1.066 after all the calibration and offset adjustment. Since I was slightly shy of my target volume anyway, and I’d been targeting something under 1.065, I diluted it further with ½ L of water to get it to 1.064.

From there, I got it into the fermentation chamber to get it the rest of the way down to 66°F. Then I pitched that healthy dose of London III.

I’ve heard a lot of people describe the London III strain as consistent, and as a good performer but… I don’t know. Both times I’ve used it now it seems to start strong and then take a while to finish up. I had it at 66±1°F to start with and while it got off to a strong start, it seemed to start slowing down after about two days. This didn’t seem particularly abnormal, but by the time I was at +103 hours, I was ramping the temperature by a couple of degrees. And while it didn’t exactly stall here, the the ramp-up in temperature didn’t seem to do much, and it took another week or so to hit final gravity. Again, not terribly abnormal, but I need to manage my expectations better — and stop trusting other people when they say this strain rips through wort.

Regardless, 13 days after pitching, the fermentation had finished at 1.019. While not the 1.018 predicted by BeerSmith, the one point difference isn’t too concerning — and is most likely explained by the ever-so-slightly higher than planned starting temperature on the mash. Satisfied that the yeast had fully attenuated this wort, I cold crashed for 24 hours and proceeded to kegging.

Unfortunately, there were some… mishaps with the auto-siphon while I racked it to the keg. I’m still not sure what happened, but I managed to disturb the trub somehow and slurp up a fair amount of yeast slurry and other gunk. Not an alarming amount — but enough to notice it, and enough to be annoyed. And/but/so then the siphoning just seemed to stop despite at least another half-gallon of stout in the carboy. Oh well.

Nevertheless: about 4.25 gallons into the keg. The headspace flushed again with CO₂. And that keg put in 24 PSI for 24 hours…

I’d like to compare it to a traditional oatmeal stout but… it’s pretty much what I was going for. 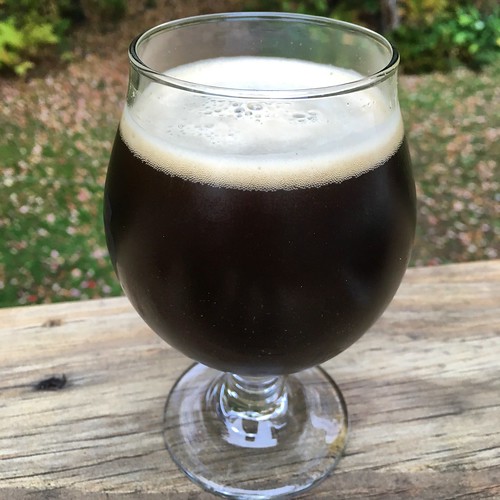 AROMA. Relatively low overall. Roast over bittersweet chocolate over toffee and coffee. Very little hop aroma, and what’s there is largely earthy. There’s an ester note like dark cherries in the background, but quite low. No DMS, no diacetyl.

APPEARANCE. Deep mahogany brown, almost black; some chestnut highlights with the light behind. Nearly opaque. Draught pour gives a light tan head with dense foam and excellent retention. (Good lacing too, I might add.) Some of the carbonation bubbles are visible with a fast-rising dance when the light hits just right.

FLAVOR. Leads with a toffee sweetness that gets more complex mid-palate: low roast, moderate cocoa, mild coffee, slight nuttiness, a bit of grainy character. At the back of the mouth the sweetness reasserts and plays off a smooth hop bitterness. Hop flavors are low but present as earthy and herbal. Retronasal sensations suggest toasted nuts. The finish leans sweet but is fairly balanced, with an adequately assertive bitterness to keep the malt sweetness from being cloying. (That said there may also be a tiny bit of husky astringency at play there.)

MOUTHFEEL. Medium body tilting toward fullness; a pleasing weight. Carbonation is moderate but not too low, and I think still suitable for style. Mild creaminess. Fairly low astringency, though tolerable, and not distracting.

OVERALL IMPRESSION. Comparing to the BJCP style guide, I would say it’s probably a mid-to-high-30s scoring version of the style. Regardless of what the style says, it’s pretty close to what I was going for in an oatmeal, and I’m having a great time enjoying pints of it. 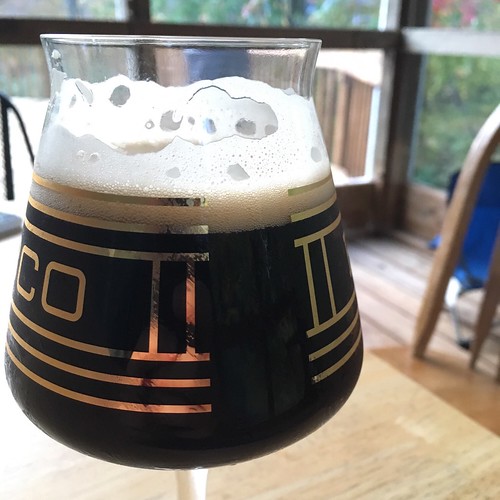 Any changes for next time? It’s hard to say what I would change unless I went to an all-grain version. I thought I did about as good a job as any with respect to balancing the grist in the mash with what ingredients go into the Briess Traditional Dark LME. If anything, I’d take more care with the mash temperature so as not to run too warm for those first fifteen minutes or so. I’m on the fence about the bitterness, but I’d probably experiment with boosting that a little — even if just a quarter ounce more of Galena in the initial bittering addition. With yeast, I’d probably use London III again, though I’d probably also ramp the temperature earlier, and boost it with some yeast energizer after 4-5 days. Oh and — of course — I’d take more care when racking to the keg; sucking up even that trub was embarrassing.

The partial mash (BIAB) recipe for Otaku Supper is as follows:

Starting with the Champlain Water District profile as a base, modifying to meet the “Black Balanced” profile (Bru’n Water spreadsheet):

One Response to Homebrew #44: Otaku Supper