Braggots — that fun little beer/mead hybrid. I’ve made the one so far, and used honey in brewing a fair number of times. I pitched a talk to Homebrew Con and thought that if they accepted it1 then it would be good to bring a variety of braggots to share. The Naked Braggot would be the first.

When I wrote the pitch for the Homebrew Con talk, I decided to outline something I called “The Seven Braggots Project”. The idea would be to dig deep into the style — its history, and the many variations — and to crystallize around seven2 takes on it. Similar to the conceit behind the 2018 Mead Day Mead,3 I wanted to make a braggot that was as simple as possible. I wanted to strip it down to just the essential components.

In other words: How simple could you get on ingredients and process and still call it a braggot?

And then I thought to up the ante and introduce an experimental variable: Would adding the honey at different stages impact the finished product?

Straightforward is probably the best descriptor here. Collecting strike water and milling early in the morning. Mashing at about 152ÂºF. Boil for 60 minutes. 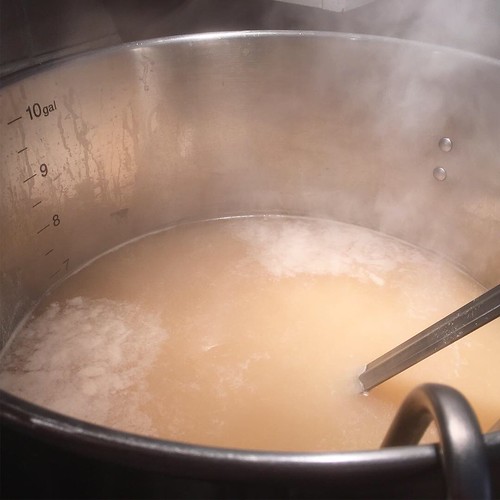 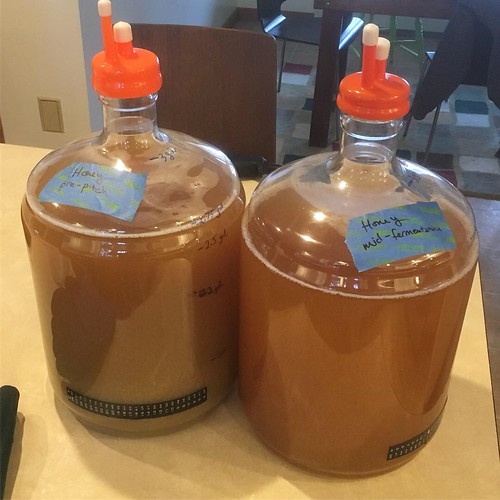 I rehydrated two sachets of US-05, and pitched one into each. The carboys were moved to my basement, which was holding fairly steady in the low-60s ÂºF. 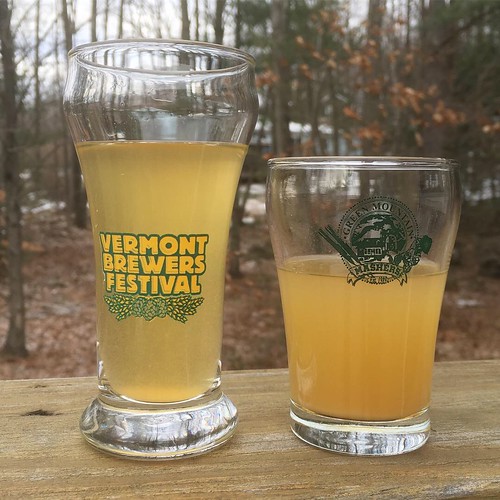 Fermentation was evident within a few hours, and fairly vigorous by +16. At +28 hours, I noticed that the batch that had the honey added immediately was fermenting with noticeably more vigor. Trying to get out in front of any major messes, I swapped the airlocks for a blow-off bucket. 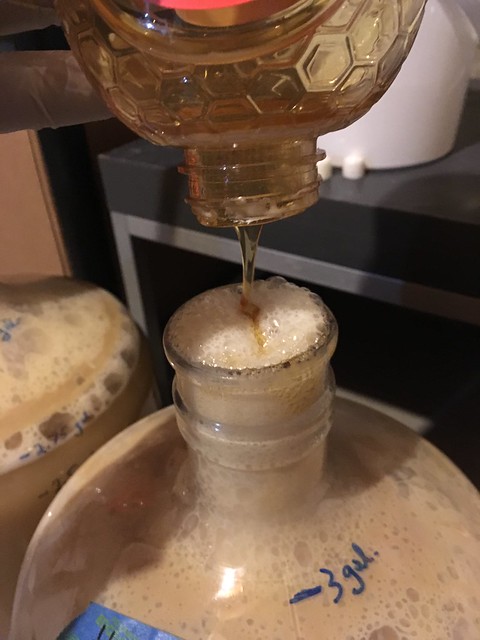 It made a little bit of a mess, but nothing I couldn’t manage.

Fermentation proceeded from there and I observed over the next couple weeks. When I was confident that we’d achieved final gravity (hydrometer readings of 1.006 for both), I packaged the braggots separately, priming with corn sugar to 2.3 vols and bottling. I let them condition for about two weeks before sampling them for a side-by-side comparison.

Pleasant enough. Simple flavors. Certainly enjoyable enough. The two batches don’t really seem all that different from one another though.

FLAVOR. Early honey. Malt element is present but medium-low; a biscuity sweetness and some cracker. Honey element is moderate. Some floral characteristics, especially retronasally. A mild citrus impression, especially in the mid-palate. Low bitterness. Reads more like a mead than a beer, but definitely not fully like a mead. Mid-fermentation honey. Mostly same, same, sameâ€¦ But somehow the flavors seem ever-so-slightlyâ€¦ richer? fuller? But not significantly.

OVERALL IMPRESSION. Same for both. Not an especially complex beverage, but pleasant to drink. Reads more like a mead than a beer, but the malt contributions are sufficient to differentiate it as a style. No significant hop character. Alcohol asserts itself but isnâ€™t overwhelming. Itâ€™s an easy-sipper, but doesnâ€™t have a lot going on. â€œPleasing, butâ€¦ nothing to write home about.â€ No significant faults, though could stand to be a little clearer, and maybe smooth out the alcohol.

A successful enough experiment, at least inasmuch as what I was hoping to demonstrate. First, that you can make a serviceable braggot with just the simplest of base ingredients. Second, that while adding the honey mid-fermentation might give it a fuller/richer impression, that such an impression is slight, and there certainly weren’t any quantitative differences.

I don’t know that I’d make this specific braggot recipe again, but it was informative. And I plan to move ahead with the other braggots in my project.

The all-grain (BIAB) recipe for Naked Braggot is as follows:

One Response to Homebrew #79: Naked Braggot