I’ve got a soft spot for amber beers. My first homebrew was an American Amber Ale (nÃ©e red ale). It morphed into Honestatis, which I’ve brewed eight times (with multiple variations). And of course we can’t forget Sirius Moonlight (and Mk. II!) and Le Rousse.

So when we were doing our BJCP study group, and I started to learn how hard it was to come by most of the Czech styles around here, I thought that I might brew one. Well, that session came and went without such a homebrew, but the plan didn’t die. So I committed to brewing one in 2019, and in fact made it my first of the year — Half Dark, a Czech Amber Lager:

I worked through probably three or four different versions of this recipe, starting all the way back in June of 2017. But by the time mid-January 2019 rolled around, it was hard to tell which ideas had come from where. I threw them all out and started over. Shooting for about 15 SRM and a 1.055 O.G., I painted with broad strokes: 60% pilsner malt, then 20% each of a dark Munich and melanoidin.

With that as my foundation, I figured that I could hit it with Saaz up to about 30 IBU and then ferment with either a Czech strain like WLP800 or Wyeast 2278, or just throw W-34/70 at it.

With all this plugged into BeerSmith, I compared my notes against a few other recipes. It turned out to be pretty similar to the one Josh Weikert included on Craft Beer & Brewing; his had a little caramel malt and so… I added that in and was ready to go.

I staged my gear and collected water the night before, so that I could get to brewing bright and early the next day. Milled my grains and got the flame going for the strike water. I mashed in at 153.5ÂºF — just a little bit above my target, but not enough to sweat it. Mash pH was 5.46, and I held it for 75 minutes. 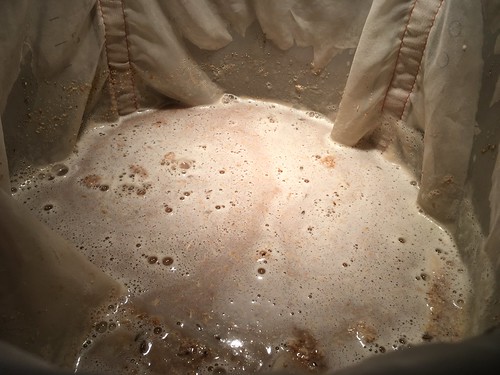 I added my first wort hops — including a small and impromptu addition of Sterling to cover the IBU gap — and took a pre-boil gravity reading. I was starting at 1.044, which was slightly shy of the estimated 1.046. Not a huge difference, but enough to make me do some quick math in BeerSmith. I’d planned a 60 minute boil, but decided to extend it to 75 minutes. 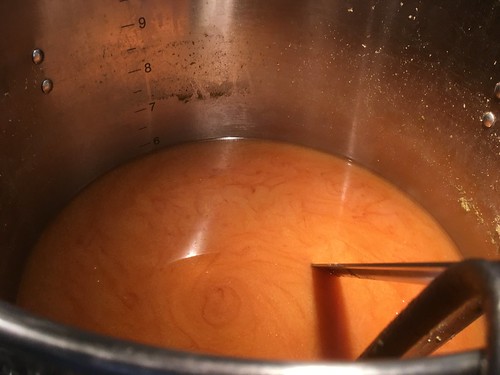 Chilling alone got the beer down to somewhere in the 65-70ÂºF range. I got the brew bucket into my fermentation chamber and within about 3 hours it was down to 52ÂºF — right where I needed it to be for pitching. 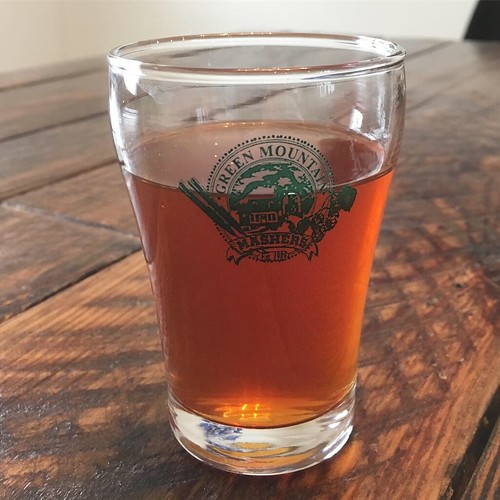 I pitched the full volume of my starter when the wort was 52ÂºF, and set the controller on the chamber to 52Â±2ÂºF. That held it steady for several days, and I took the first sample for gravity at +114 hours. I sighted 8.8ÂºBx on the refractometer, which BeerSmith converted to 1.023.

The next day, at +137 hours, I started ramping up the temperature to encourage complete attenuation and perform a diacetyl rest. I brought up the temperature +5ÂºF every 12 hours until I hit 66Â±2ÂºF. I held it there for three days before taking another gravity reading — 7.2ÂºBx which BeerSmith converted to 1.012.1 Flavors were developing nicely — still young, but no significant diacetyl — so I began the ramp down: -5ÂºF every 12 hours.

After spending three days at 35Â±2ÂºF, I decided it was time to keg the beer and harvest the yeast. I took a sample for gravity (hydrometer reading was 1.014 after temperature calibration), and mixed up a gelatin solution that I added to the keg. Then I ran off a very complete 5 gallons into that keg.2 I purged the headspace with COâ‚‚ and put the beer on-gas at 12 PSI.

Meanwhile, I harvested the yeast cake so that I could re-pitch it into my next beer (a Munich Dunkel) a couple days later.

“What about lagering?” If I followed the advice from the Noonan book, I would need to lager this beer for 7 weeks given the 1.055 O.G. That would mean I could start serving it at the end of March.

Instead, my impatience got the better of me in mid-February. I took a small sample and it tasted fine. I said to myself oh just sit tight — but that was foolishness. Why sit on perfectly good, drinkable, delicious beer? I BeerGunned a few bottles for competition, and put it on draft.

I don’t recall having had a Czech Amber Lager before3 so it’s hard to say whether I nailed the style, but I’m very much enjoying this beer.4

AROMA. Malt-forward; a lightly toasted bread character at medium intensity. Moderate notes of caramel. Low floral hop impression. No detectable DMS, nor diacetyl. Background notes of dark fruit like black raspberries; it’s subtle and not in every whiff, but it’s there. Also a fleeting impression of vanilla?

FLAVOR. Malt forward again; flavors largely follows aromas. Medium intensity toasted bread; significant Maillard products. Moderate notes of a light-colored caramel, especially in the mid-palate. Impression of sweetness in the finish, but decidedly dry. Firm, medium bitterness. Hop flavor impressions at medium-low; spicy on the palate, while retronasal impressions swing to floral or herbal. Black raspberry ester character from the aroma is almost absent here; hints of it retronasally but otherwise undetectable. Fairly even balance, giving over slightly to bitterness. Aftertaste is a mix of light caramel and bitterness.

MOUTHFEEL. Medium body. Medium-low carbonation with some bite that seems to accentuate the hop character. Light impression of creaminess. No significant astringency. No significant alcohol warming.

OVERALL IMPRESSION.5 Matching my impressions to the style guide descriptions: very good (maybe excellent?) example of style. Medium-bodied amber beer characterized by bitterness that plays off some sweet caramel notes. Dry finish enhances drinkability. My criticisms are probably mostly stylistic nit-picks? Lager longer for a more brilliant clarity? The beer is very drinkable but lacks some complexity. Dial back bitterness slightly so it’s not out-competing the malt character. Maybe slightly over-carbonated? Maybe consider softer water to smooth out some of the mouthfeel?

The all-grain (BIAB) recipe for Half Dark is as follows:

Starting with the Champlain Water District profile as a base; carbon filter the water and dose with… nothing. Just a little 88% lactic acid to adjust mash pH.

Half Dark, a Czech Amber Lager by Tilde Gravitywerks

2 Responses to Homebrew #81: Half Dark