Oof — where to begin with this one? With the delicious end product and the against-all-odds happy ending? Or with the nothing-is-going-right process that got us there.

Either way, Expensive Chaos is a New England-style IPA with Belma, El Dorado, and Sabro:

As I commented with Lupulin-Industrial Complex:

Perhaps because I live in such a wonderland of New England IPAs, Iâ€™d never felt a burning desire to make one.

But I started hearing about Sabro and felt just such a burning desire. The way Odell’s Brent Cordle talked about it on the Drinking Socially podcast (Episode 30) and then what I was reading elsewhere (like the Washington Beer Blog) — it just sounded too interesting to pass up. An NEIPA would be the perfect vehicle for it. I was doubly convinced of this after I had Valentina … and then again when I had Dabble.

So when I saw Sabro for sale on Yakima Valley Hops, you better believe I didn’t hesitate to pick up a pounder: 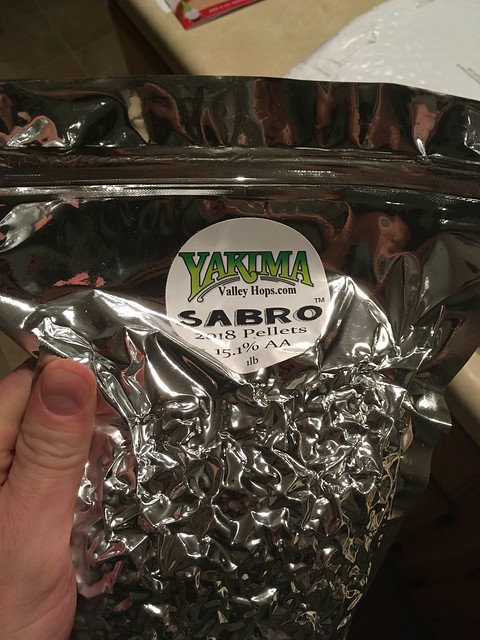 But… I couldn’t get out of my own way. I stuck to the brewing schedule that I already had in front of me (lagers!), and that pound of Sabro sat in the freezer for… a while

Regardless, I was reasonably happy with the Lupulin-Industrial Complex grist, so I assumed that I’d roll with that (plus the identified tweaks). And since my story made BBR’s year-end disaster show, I earned myself a promo code to Steve’s Brew Shop (“…dot com”) and figured I would use it to acquire some Imperial Yeast. I had my sights set on Barbarian but it was out of stock; Juice appeared to be a good substitute though — even if I wasn’t equipped to give it the extra Oâ‚‚ boost that Imperial recommended… I figured well, I’ll figure something out.

Just like that, I’d rolled the dice with trouble and I hadn’t even brewed yet.

When the yeast arrived, it was a little older than I’d hoped. But still not so old that I couldn’t get a good enough cell count with a reasonably-sized starter. So I got that going the day before — the assumption being that by the time the brew day was wrapped up, the stir plate would have been spinning for 24 hours and done the majority of the work it needed to do. 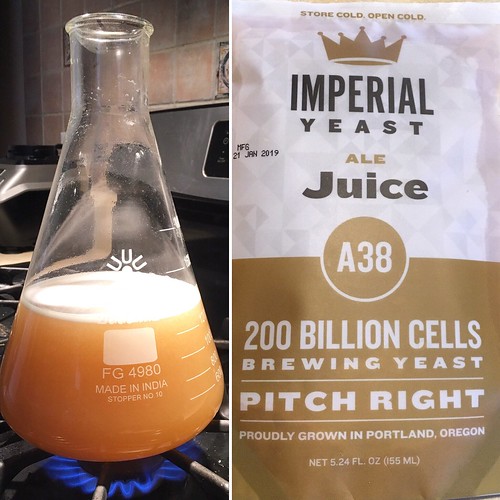 Brew day was going to be exciting! It was finally warm enough (if still chilly) to move out of the kitchen and rock my garage system again. As such, I staged my gear the night before.

That morning, I collected my water, hit it with the minerals and the flame, and decided to mill while the water was otherwise coming up to strike temperature.

TRAGEDY #1! I got the first 5 lb. of the grist crushed and then… the mill just stopped working. The roller would spin, but it didn’t seem to catch. I tried everything I could think of. Neither roller seemed jammed or stuck — but they wouldn’t turn together to actually crush anything. I checked the gap. I checked the rollers again. I took it apart and did a quick cleaning. (I couldn’t find the lubricant so… got stuck there.) Nothing made a difference.

Luckily my local HBS is a super short drive away so all I had to do was wait for them to open. In other words, all hope was not lost — I could at least mill there. But then it wasn’t my crush. Oh well — better than having to call the whole brew day off, right?

And since I had to do the extra waiting, that meant I had to bring the strike temperature up again. Wherein… oops! I over-shot it slightly. But not so much that I was going to worry about it. It was only 2-3ÂºF. Nevertheless…

TRAGEDY #2! I’d spaced when I collected the water. I’d written the recipe such that I was going to withhold 10 quarts to heat separately as a mash-out infusion. Needless to say, adding 14.25 lb. of room temperature malt to 30 qt. of 168ÂºF doesn’t drop the temperature as much as adding that same malt to 20 qt. at 165ÂºF. Ugh. I guess I’ll just leave it uncovered that much longer?

As I lamented this, my loving spouse patted me on the back and tried to reassure me. “Maybe this will be your best batch ever and you’ll just never be able to repeat it?” 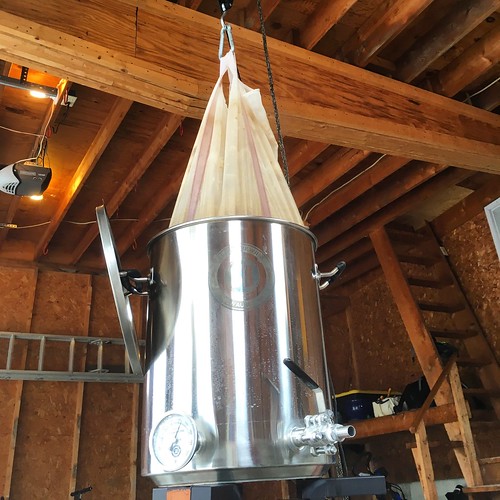 I decided to skip measuring mash pH, but I did pull a gravity sample post-mash. Oof… TRAGEDY #3! I missed that target by 10 points — 1.053 vs. the estimated 1.063. Yikes! Where do I even begin dissecting that one?

Nevertheless! We must rally onward. Get the flame going again. Let’s bring this sucker up to a boil. Let’s roll with it. And then just as I start to notice bubbles breaking the surface…

TRAGEDY #4! I go to grab my (stainless steel) mash paddle, which was hanging from one of the kettle handles and — holy crap had it gotten ridiculously hot! Luckily I was wearing my heat resistant brew day gloves because that protected my tender human flesh. Which was super fortunate because it had somehow gotten hot enough to partially melt portions of the PVC gloves. So now I’ve dropped the mash paddle on the garage floor. And it has small amounts of PVC melted to it. And other blackened streaks. It’ll all scrub off, I say to myself — but in the meantime I need to run to the basement and bring my big brew spoon out of (partial) retirement.

“That was close!” At least I didn’t get any of the melted PVC into the wort. 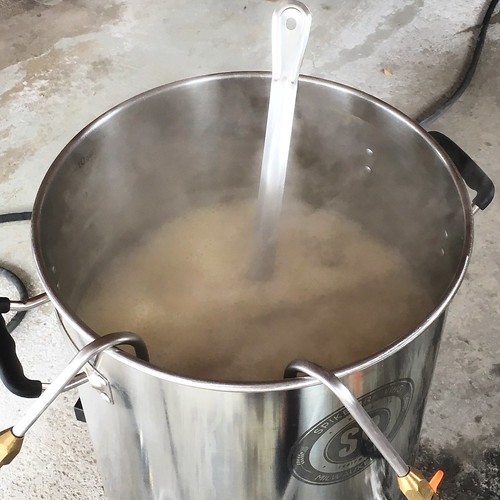 From there? Followed my (abbreviated) boil schedule, then threw on my chiller to get it down to 180ÂºF for the 15 minute hop stand. Then chilled it down the rest of the way to pitching temperatures.

I got it into the fermentor and pitched. I’d had enough dramatic tragedy for one brew day. I just wanted to clean up before anything spilled… or someone got hurt. Original gravity of 1.060 — not all that low unless you consider that I was shooting for 1.073.

I’d gotten the temperature down to about 59ÂºF for the initial pitch. I dumped the full 1400 ml starter into the wort and set the controller to 66Â±2ÂºF; initially the heater wrap was unplugged so that I could let it come up to temperature on its own. Again: Imperial recommends extra dissolved oxygen for the wort when pitching Juice but… I don’t have that gear so I just shook things extra hard, knowing that that was little better than voodoo. What could go wrong? he asked himself.

Checking in at +16 hours post-pitching, things were chugging along nicely. Some nice and vigorous activity in the blow-off bucket — lots of strong bubbles.

By +27 hours, things already seemed to be slowing down. That’s weird… But I got my 2 oz. of Sabro tied off in a sanitized hop sock, and added that to the wort as a biotransformation dry hop addition.

By +52 hours, the activity had slowed… let’s just call it significantly. I added a little grimacing face emoji to my notes in Evernote and wondered if this was TRAGEDY #5 or just… me not understanding the dynamics of this particular yeast strain?

I held my breath and crossed my fingers. I took gravity at +75 hours and saw it read at 1.018. Ride it out, he told himself.

We were leaving for vacation in less than a week. Time for some mental calculations: Was the temperature bump going to get it down to final gravity before we left? What about the next round of dry hopping? What about getting it into the keg? Was I going to need to choose between packaging beer and packing boxers? Patience, he heard the voice in his head.

So imagine my relief when I returned from Seattle and the beer had reached a final gravity of 1.011 — making for an apparent attenuation of 80.9% — right in the range that the Imperial Yeast website said. (So maybe if you don’t give it enough oxygen you just need to give it more time?)

I decided to keg hop with another 2 oz. of Sabro (why not?)1 and keg it up and use that carbonation stone lid to get it carbonated lickety split. 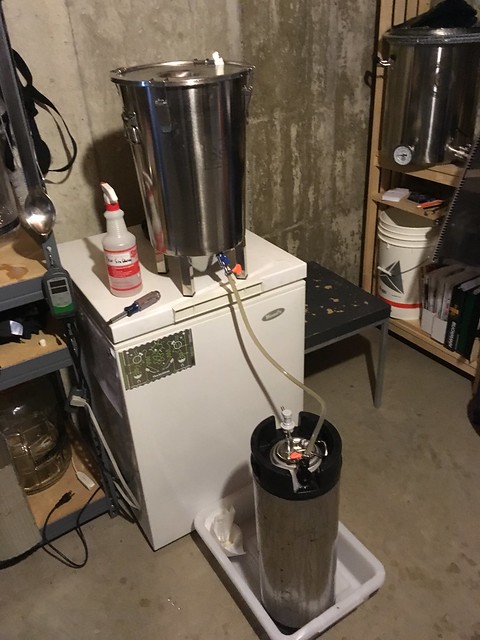 Oh yes. It’s almost (almost) worth of being served in that Alchemist Teku glass.

AROMA. Quite hop-forward. Strong peach. (And/or apricot?) Medium pineapple and tangerine. Hints of cedar. Moderate “cream of coconut”. Light base malt character evoking cracker. Enough hop-derived fruit notes to make it difficult to say what’s from an ester or not. Fruity though — supportive and enhancing of what’s there. No detectable off-aromas.

APPEARANCE. Stylistically appropriate haze; opaque but not murky. Pale gold. Dense white head with strong retention. Hop matter was present (bummer!) — but that was just in the early pours.

OVERALL IMPRESSION. It’s an enjoyable and arguably very good New England IPA. It’s just as hop-forward as I had hoped, and just about as intense also. Malt character is supportive and well-balanced with the hop and fermentation elements. The biggest dings are in the mouthfeel — it needs slightly more body, and the quality of that body should be softer.

The all-grain (BIAB) recipe for Expensive Chaos is as follows:

Note: instructions attempt to reflect what I actually did, not what I had planned.

One Response to Homebrew #87: Expensive Chaos