Perhaps because I live in such a wonderland of New England IPAs, I’d never felt a burning desire to make one. Don’t get me wrong, the challenge itself is tempting — but only 4-ish years and 75 brews into the hobby, there are still so many challenges to choose from! However, when the opportunity to get a little hop hash came around, it seemed like the perfect excuse to take a stab at this. And this brings us to Lupulin-Industrial Complex:

I’d heard of this stuff before — that hop pellet production actually “leaks” (for lack of a better term) a not insignificant quantity of resins and lupulin powder.1 It’s this “leakage” which is collected — purportedly off of the pellet-making machinery — and compressed and sold as hop hash. Much like fresh whole cones, they have volatile (i.e., seasonal) availability so it’s not an ingredient you can normally get. 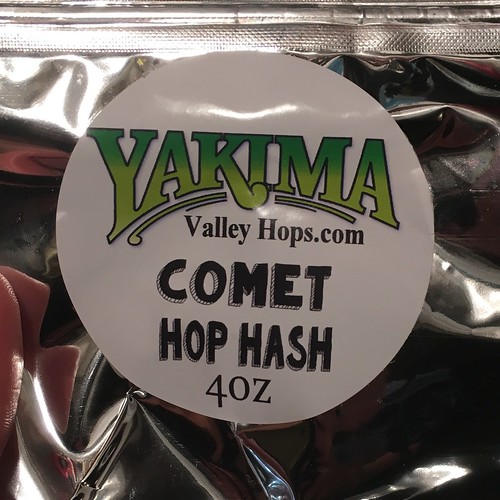 But what to make with it? Then I grit my teeth and admitted to myself that there was really only one answer to that.

The night before, I staged my gear and prepped my water. I ran my municipal water through a carbon filter, added the minerals and then (just to be extra safe?) dosed each of the collected volumes with a quarter Campden tablet to drive off any chlorine the carbon filter didn’t otherwise remove.

As winter settled back upon the Vermont landscape, my garage-brewing season was ending. Reluctantly, I moved the brewing operation back into the kitchen and, that morning, got going with the milling and the flame for the strike water and all of that. 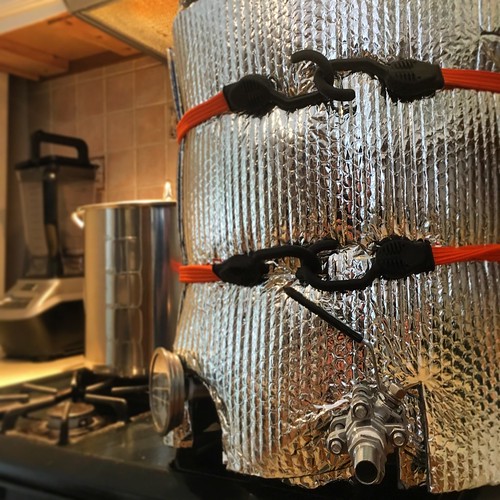 Transitioning back into the kitchen didn’t present any real problems2 and the rest of the morning proceeded pretty much without incident. (Certain heating steps just took a little longer?)

More or less hit all my numbers (1.069 O.G. and just barely shy of the target 5.5 gal. into the fermentor) and pitched my yeast that afternoon. 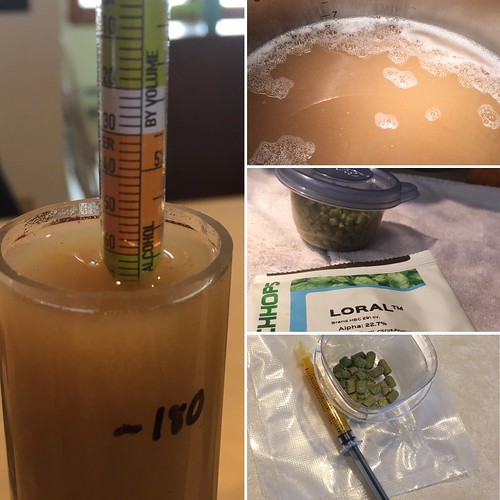 (A fun aside: this would also be my first time using a “HopShot” as part of the bittering addition.3)

After the wort had chilled to 65°F, I decanted off most of the supernatant from the yeast starter and pitched a slurry of Omega OYL-052 DIPA Ale.4 Then I set the ceiling on my controller to 68°F and walked away — letting it free-rise from there.

After a couple of days, activity in the blow-off bucket was slowing down, so I bumped up the controller to 70±1°F to encourage complete attenuation and re-metabolizing of any diacetyl.

I pulled a sample for gravity a few days later and saw that it had come down to 1.012 — I expected that this was likely where it would finish. Another gravity reading three days later confirmed this. I added the 4 oz. of Comet hop hash to dry hop at this point.

A Brief Aside About Hop Hash

As I mentioned earlier, I didn’t really know what to expect with the hop hash. I had read a little bit about how it was made, and that it was concentrated and therefore intense. But even with that knowledge, I wasn’t fully prepared for what I would see (and smell) when I finally opened the vacuum-sealed bag.

First of all, before I even saw the green clumps inside, I could smell them. The aromas were intense. Resinous dank weed intense. Granted I realize it’s popular to the point of cliche for brewers to make that comparison — but I can confidently assert that I’ve never made the association more strongly than when opening this bag. And again, because this is such a popular comparison to make, it’s really hard for me to stress just how apt the comparison is here.

Second, the format of the hop hash was… strange? I was expecting something more like a powder. (No clue where I got this idea.) Maybe a compressed powder — but something that would easily break up. Instead, these chunks were sticky and hard. They wanted to stay together. I did eventually work them apart into bean-sized bits, but it took some work.

End of Aside, and Onward to Packaging

After three days on the hop hash, I took one last gravity reading (still 1.012) and transferred the beer to a keg. Sensitive to the “drink fresh” nature of such a hop-forward style, I decided to try out one of those fancy keg lids with a carbonation stone. After chilling the beer to 40°F overnight, I applied about 28 PSI through the carbonation stone5 for six hours. After that, I transferred the beer to a kegerator and did my first pour later that afternoon.

It’s recognizably a New England IPA — and not too shabby for my first attempt. 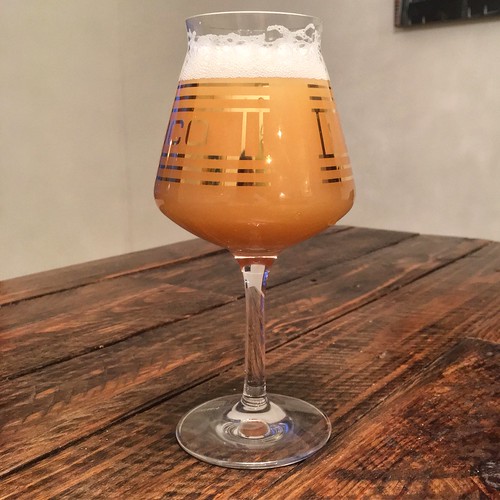 APPEARANCE. Pale gold color. Hazy to the point of opaque, but not turbid — uniform color. Roughtly 2cm white head with loose foam on initial pour. Retention average, but persistent ring of foam. Eventually collapsed completely, though swirling the glass could re-rouse it briefly.

MOUTHFEEL. Medium body. Medium carbonation. Soft impression overall, with some “hop burn” in the finish. No significant astringency, though that “hop burn” could be read that way. Moderate alcohol warming. Despite body and overall “softness”, those elements do not translate into any significant creamy character.

OVERALL IMPRESSION. Recognizably a New England IPA, and not bad for a first attempt. While not a subdued aromatic intensity, seems to lack some of the “punch” of the style.6 That said, the first thing that comes to mind is to dry hop at an even higher rate — but that might intensify the “hop burn” which, while common in the style, isn’t exactly desirable. I also suspect that the head retention may have been negatively impacted by the dry hop rate as-is. The pine elements don’t exactly clash, but they seem to throw the other hop elements slightly out of balance. Malt character seems appropriately supportive. No obvious fermentation faults. Reminds me a little bit of Uncanny Valley.7

And having said all that, it occurs to me that although I drink plenty of NEIPAs, I hadn’t made a study of the style’s production. I’d read a few articles and blog posts, listened to a couple of podcasts… but I hadn’t taken notes. I went into it with a mental checklist like:

And I mostly checked those boxes as I got this together. So what would I do to improve it?

First, I’d make a better study of the style’s characteristic ingredients and production. Perhaps there are some subtle process tweaks that will make a big difference here. (There’s always room for improvement in the O₂ minimization department.)

Second would be to look at how I might boost the hop intensity, especially in the aroma. I hear these stories about people dry hopping with a pound or more of hops and while I think that’s ridiculous (i.e., diminishing returns) — perhaps adding a third dry hop would do the trick? (Jam it in there perpendicular to the other two?)

Third, I might play with the proportions of the adjuncts a bit. I used equal amounts of flaked oats and flaked wheat, to 20% of the grist. I’m not dissatisfied with the mouthfeel, nor the flavor, so I can’t point to those elements and say with certainty that they need to change. But I also can’t point to the flaked wheat and tell you what it’s contributed; and I do love some Orbital Elevator, so maybe going 3:1 flaked oats to flaked wheat to 20%…? (I’m sure a closer study of the style will have opinions galore on which adjuncts in which proportions.)

Again, I’m satisfied overall with how the beer turned out. The main thing that this beer needed to do was give me a chance to play with the hop hash. And it definitely delivered there.

(P.S. — I would totally brew with hop hash again.)

The all-grain (BIAB) recipe for Lupulin-Industrial Complex is as follows: