Oh yeah… my first brew of the great Coronavirus SARS CoV-2 COVID-19 Quarantine Shelter-in-Place Lockdown of 2020. This was a beer that I had queued up before all the Washington state “Stay Home, Stay Safe” stuff went into effect but… then there was the whole matter with my kegerator needing a re-build to deal with the COâ‚‚ leak and… Well, shit happens — right?

In any case, despite my 2020 goal to brew 6+ new-to-me styles, you also need to keep some reliable palate pleasers around. As a New England IPA, Dubious Provenance was just such a beer.

There were a couple of primary motivators with this one. First, I had several pounds of Briess 2-row from a 55 lb. sack that I was just dying to finish off. (Check.) There were some fun-looking experimental hops available on Yakima Valley and I thought it might be fun to play around — really go wild — in the spirit of new-to-me brewing things. (Check.) See also: Kveik yeast, anyone? (Another check.) Oh, and I wanted to see if I could dial-in my emerging preferred water profile for this style. (BIG CHECK.)

“OK sounds like we’ve got the materials and motivation; let’s brew a beer!”

Brew day was … much delayed. I did my shopping for this beer and Zondag Meisje on the same day, with the goal being to brew the latter in March (which I did), and the former soon after. But as alluded to earlier, first the shelter-in-place order hit, bringing some attendant disruption with it, and then I discovered that my kegging system had an impossible-to-find-but-definitely-leaking slow COâ‚‚ bleed somewhere.1 But given that I had this age-sensitive drink-fresh style queued up, it wasn’t like I could just brew it and sit on it. That seemed irresponsible — so I did the next best (worst?) thing and simply delayed any brewing until I could wrap up the kegerator rebuild.23

Nevertheless… brew day did come. And what better day to resume brewing than the 2020 AHA (Virtual) Big Brew Day?4 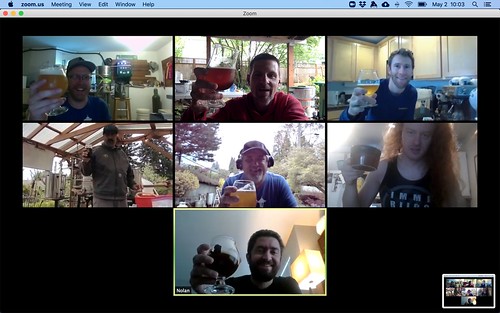 I got my day started … well not early, but I wanted to have already mashed in by the time the Big Brew Day toast was happening (vide supra). But yeah…

Got mashed in only slightly north of my target temperature, had a plenty-acceptable pH reading at 5.22, and just let things go for the planned 90 minutes. Took my pre-boil gravity reading and… BeerSmith converted my 14.4ÂºBx to 1.058. A bit low but… “Sure, OK. It’ll be beer.”

Get it to boiling, add the bittering charge, etc. 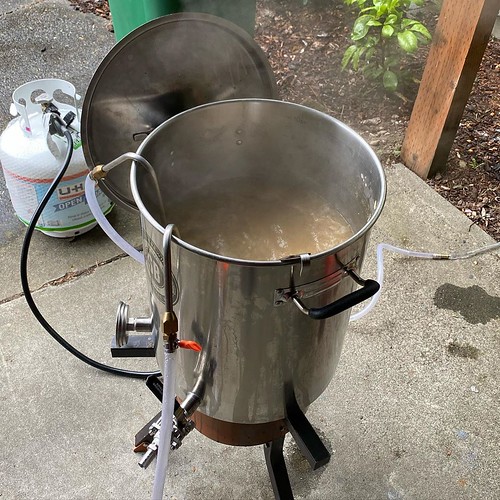 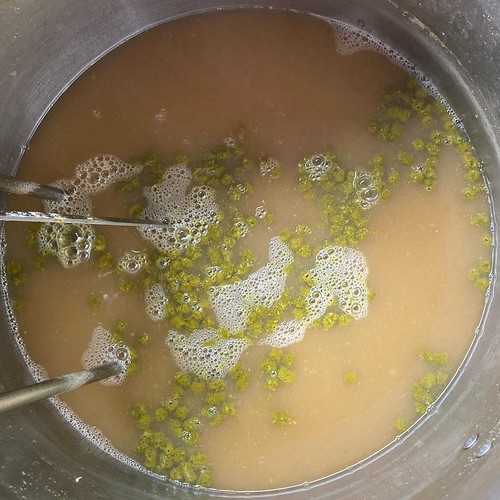 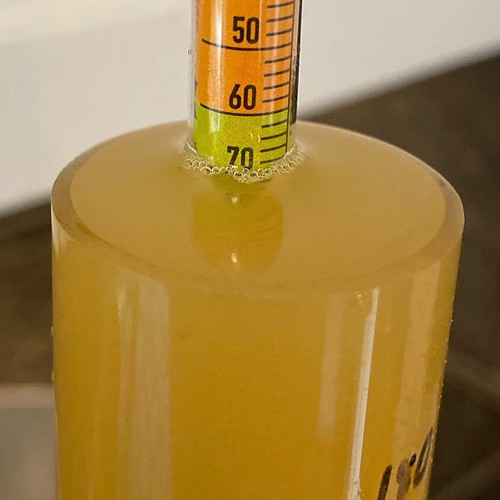 I pitched the A43 Loki almost immediately. The guidance I’d gotten from friends was that this kveik strain throws some interesting esters when you ferment it warm. And by warm, we’re talking in the mid-80s ÂºF here.

The thermometer on my controller was reading 82.5ÂºF when I pitched, and then I locked it in at 84Â±2ÂºF. Just a single pack; no starter. (That was the other thing friends told me: that under-pitching wouldn’t be a big problem.)

I didn’t check the fermentor again on brew day, but the next morning (+18 hours after pitching), there was some vigorous activity in the blow-off bucket.

In other words, I suspect that the kveik strain may very well have hit F.G. in less than 72 hours, and possibly less than 48 hours. Even with a few more days of maturation, that hinted at grain-to-glass in about a week. And given that I wasn’t picking up any obvious fermentation faults here… “Why not go ahead and package it?” 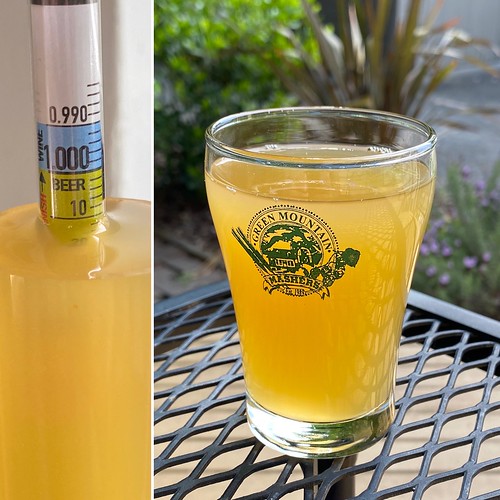 Three more ounces each of HBC 472 and HBC 586 went into tied-off hop socks that went into the keg. Transfer the beer and put it on gas courtesy of that handy carbonation stone…

Recognizable as the target New England IPA style, and a nice incremental improvement over my previous two attempts (Lupulin-Industrial Complex and Expensive Chaos). Very enjoyable to drink. This is the kind of beer that friends-of-homebrewers would compare favorably to commercial examples and (after a second one) slur that you should shtart your own brewery, ya know? I wouldn’t go that far, but I do think it turned out pretty good. 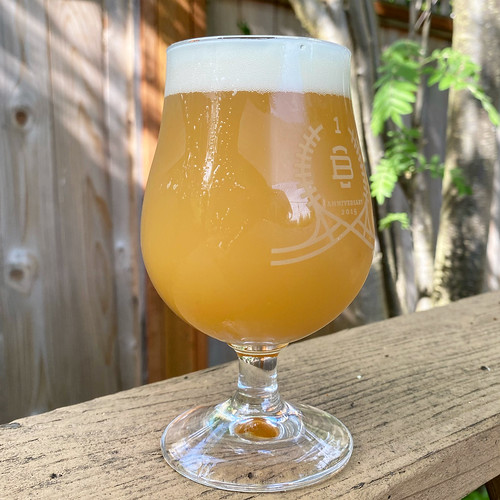 AROMA. Moderately low grainy-sweet malt with hints of cracker and background honey-like accent. Medium-high hop notes overall: substantial pineapple and mango; distinct nectarine; moderate white peach; low but pronounced orange zest. Hints of guava and floral notes. Cedar? Some fruity notes could just as easily be esters as from hops. Mild but notable ethanol. No significant detectable off-aromas. Overall aromatic levels seem slightly low for a style that is supposed to have “intense” hop character, but neither is it dull or subdued.

APPEARANCE. Pale gold color. Hazy bordering on opaque as appropriate for the style; no noted particulates (e.g., hop matter or yeast). Dense white head pours foamy and meringue-like but settles into a persistent cordon — seems to collapse on the quick but easily re-roused. May be slightly over-carbonated.

FLAVOR. Malt flavors are low but present and mirror aroma; grainy-sweet with a crackery impression. Hop flavors also follow aroma: medium-high, with tropical notes dominating (pineapple, mango), followed by stone fruits (nectarine, peach), and Navel orange — flavor adds a medium-low element that’s evocative of raspberry. Thereâ€™s also something in the aggregate flavors that suggests key lime pie. Bitterness is an IBU short of a firm medium and seems slightly high for style. Fermentation seems clean overall, with some of the fruity impressions just as easily ascribed to esters dias hops. The balance is decidedly hoppy, though not strongly bitter. Slight residual sweetness, but just enough to make it off-dry. No significant detectable off-flavors.

MOUTHFEEL. Medium-light body with a pleasantly “soft” character. Medium-high carbonation seems slightly more than style calls for — adds a of carbonic bite in the finish that contrasts with the otherwise soft feel. Moderate warming from the alcohol. Medium-low creaminess. No significant astringency (but not none either) — would characterize that as hop-derived, though it doesn’t veer into “hop burn”.

OVERALL IMPRESSION. Very good example of the style — though I wish I could judge this one blind as I’m tempted to give myself a score in the Excellent range and/but that feels like vainglorious bragging. Primary faults are that the alcohol seems to run slightly hot (this beer should probably be 1-2% ABV lower?) and the bitterness is a touch high when compared to the NEIPA standard-bearers. Nit-pick: might be slightly over-carbonated. Creaminess to the mouthfeel is pleasant and helps to round out the overall impression. Pleasant fruity flavors dominate, though hard to detect which are hop- and which are ester-derived. (Observation only! not a criticism.) No significant hop burn — so that’s nice. Apleasant-to-drink beer that could use some minor tweaks.

Other observations? Anything I would change?

The all-grain (BIAB) recipe for Dubious Provenance is as follows: