An Altbier was on the list of styles to brew, but it wasn’t high on that list. But then a friend from the Mashers threw down the collaboration gauntlet for NHC. “What should we brew?” We settled on Altbier, each made a recipe, compared notes, mixed and matched, and… Alt, Jung, Es Ist Alles Gut was born.

Our recipes were uncannily similar. The big deviation was my inclusion of some chocolate rye — which I was totally stealing from this Weikert article. We converged on mine, made a few tweaks, tuned it to his system, and set a brew date.

Brew day was a Wednesday evening. We got started around 4:30pm — though it was more like 5 given some confusion and disorganization. It was my first time brewing with a “traditional” 3-vessel system (i.e., HLT, MLT, kettles; batch sparge) and I was excited to get to know some of the finer points of such a set up.

We milled, we mashed in, we checked pH… all stuff that felt pretty “usual” to me. The new (to me) part was the sparging. 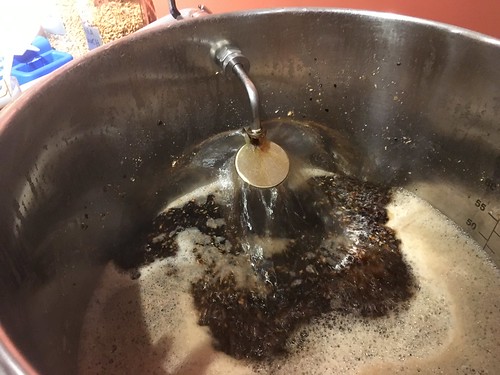 Simpler than I thought. But I’ll also admit that I didn’t feel like I was missing anything with my BIAB setup at home. Still good to learn some new stuff.

We collected approximately 15 gallons of wort and split it across two kettles. Pre-boil gravity was 1.044. Mash pH was 5.42.

Cleaned up and done for the night.

It didn’t take long for this fermentation to take off. This is maybe nine hours after pitching: 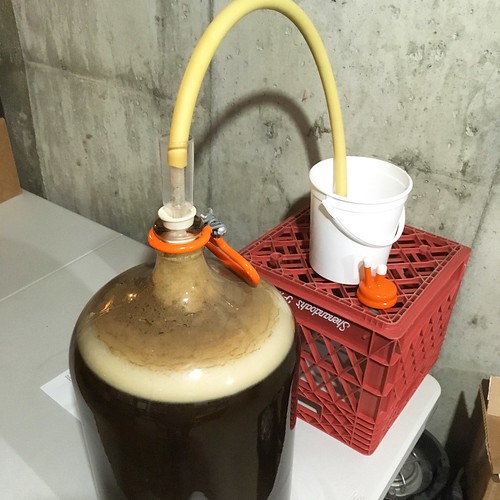 It kept vigorous for a few days, and then I let it run out for another week or so. Took some gravity readings and found it sitting stable at 1.010 — which was 80.8% attenuation and consistent with my previous observations for this strain. Confident that was F.G., I racked my share to a keg to get it on gas.

So I followed my usual kegging procedure, taking the extra step of adding the gelatin for fining directly to the keg — since I’d heard that was a thing, and we were in a hurry to get entries out for NHC.

Brief Aside About Some … Improvisation

I would be remiss if I left out this part of this beer’s story.

And so I guess I had it coming when I finished (finished!) siphoning this beer into the keg, then went to clean up and saw … a weird smudgy stain on the tubing. Ugh. Mold? I got in close to inspect (re-inspect!) but couldn’t be sure. Though maybe my uncertainty was just naïve optimism?

I thought about it a little more and had a small realization. What about Campden tablets? How many times had I used potassium metabisulfite to pasteurize must before making mead? Certainly the same principle could be applied here, right? Not something I’d normally do but… worth a shot?

I did a little research (i.e., internet searching) and came up with a calculation that looked like it could work — measured out an appropriate quantity of Campden tablets and crushed them and … depressurized the keg so I could mix them in and re-pressurize it.

I was gambling either way. Do nothing and… who knows what would happen? Maybe nothing, maybe all manner of gross flavors. Hit it with the Campden tablets and… maybe it kills the mold but maybe I screw up the dosage and get a too strong sulphur odor? (To say nothing of the extra threat of oxygen…)

Win some, lose some?

End Aside and Decide on NHC Beers

So there we were… days away from needing to have our beers shipped to New York for that NHC First Round session. Having burst carbonated, I felt confident that the beer was… well, it was as ready as it was going to get.

I did a couple of early test pours which were… fine. They were fine. Certainly not my best work but drinkable enough. I took some notes and sent them to my friend. “How’d the K-97 batch turn out?”

His response was basically: “Don’t ask; we’ll go with yours.”

So I got some into bottles and we sent it off to NYC for judging. Apparently just in the nick of time, but that’s beside the point.

Like I said… not my best work, but it’s decent enough.

AROMA. Starts with light-to-moderate sulphur note, but that blows off pretty quickly. Moderate to medium toasted bread — like a brown bread with a dark toast; not burnt but flirting with it. Low bittersweet chocolate. Hints of chestnut. Low floral hop notes. Light ester like black cherry and fig. Low smoky note in the background (phenolic?) — not distracting but perceptible.

APPEARANCE. Color is into the brown (arguably “dark brown”) range with deep copper highlights. Khaki head with dense foam and excellent retention. Great clarity, but darker color obscures some of that.

FLAVOR. Leads with medium dark toasted bread and crust character. Grainy-sweet mid-palate. Moderate earthy elements throughout. Hop flavor is moderate and woody in the mid-palate, moving to a medium floral note retronasally. Rear palate impression features ester like black cherry. Medium-high bitterness; very firm, bordering on aggressive. Off-dry finish with bitterness strong through the aftertaste. Lingering. Disappointing metallic character especially in the finish — it doesn’t overwhelm the other flavors but it is distracting.

OVERALL IMPRESSION. Oof — this is a tough one for me, and not just because I’m not super familiar with the style. See… when I compare my notes with the style guide, it actually seems to hit a lot of the marks. But the beer just doesn’t feel like it came together into a harmonious whole — and so we’re into “intangibles” territory. Like… it’s not unpleasant to drink, but it’s just OK. It’s decidedly too dark but… in a way: who cares? The mouthfeel isn’t smooth enough but… how is that specific? It has some layers, but it also feels disingenuous to call it “rich” or “complex” — both of which are descriptors that show up in the style guide.

The sulphur note seems like an easy ding (remember the Campden tablets?) — but then again, low amounts are allowable in the style. As is a low amount of astringency.

See my dilemma? The presence of these elements isn’t an automatic disqualifier — but the degree of their presence starts to equate to some points off.

So where would I land? In the Good range — maybe a score of 26. That’s what I’d give it. But I could see someone dipping down into the Fair range.

That said… the NHC scores that came back were 32 and 29 so… more favorable than my own assessment. But I also haven’t seen the full scoresheets yet, so I don’t know what else it was that they had to say about them.

I’ll have to do some follow-up meditation on that.

The all-grain recipe for Alt, Jung, Es Ist Alles Gut is as follows: (below scaled to a 5 gallon batch)

No significant adjustment from the Champlain Valley Water district profile; some lactic acid to adjust to target pH range.

Going to gloss over some of my usual details here… tune to your particular system.