As part of my quest to become a BJCP certified beer judge, I signed up to steward the 2017 Champlain Valley Fair Homebrew Competition on August 26, 2017. I hadn’t seen a competition in situ before, and I believe it would be useful to see how the events are organized and run. Further, I could meet a few judges, perhaps get some advice, and build some goodwill.

Little did I know that I would get the opportunity to help judge a flight myself.

I showed up to the event promptly and, after a quick orientation on where everything was and what kind of help I could provide, I got to work sorting the entries into their categories. The competition had four categories: 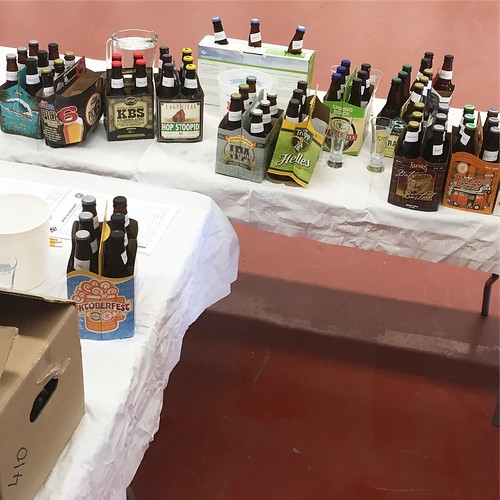 While we were sorting, Tyler (one of the judges) asked me: “How would you feel about judging?” Seems they needed one more palate in order to get through the flights in a timely fashion. Tyler and Jason (another judge, and the Green Mountain Mashers president) had both seen me perform sensory evaluations and fill out scoresheets before (here and here, respectively) and felt comfortable having me evaluate a flight under the tutelage of a certified judge.

I pointed out that I had a beer in the Agricultural category, and they sorted me into Standard American Beers. I knew these styles pretty well, so I sat down to the flight with a lot of confidence.

I won’t comment on the specific beers (because that would be a lot to remember) but I’ll roll up the experience.

Overall, the experience was great. My perceptions are well-developed, but I could stand to do a little more sensory cross-training and vocabulary development. I was able to give good, actionable feedback on the scoresheets. And I wasn’t afraid to give the score that I felt the beer deserved. While I know I have more to learn, I also know that I have a decent foundation to build on.