The first style I picked was a German Pils and thought that I’d do a little Vermont take on it. Hence Grünberg Pils:

To my palate, a good German Pils is about as refreshing a beer as you can get. Crisp and light-bodied, a nice pilsner malt sweetness, and that assertive balancing at the end. Having planned a weekend-after-Cinco-de-Mayo party, and in need of a beer for that party, I decided (after polling some attendees) that this would be on draft. I buttoned up the recipe, selected some Vermont pilsner, and got under way.

As mid-March was still pretty cold, I opted to brew this one in the kitchen rather than “finally” graduate to the garage. I’d taken a tip from a friend and set up the kettle to straddle two burners on the stove, hoping that having “more firepower” would speed things up and/or give me a more vigorous boil. 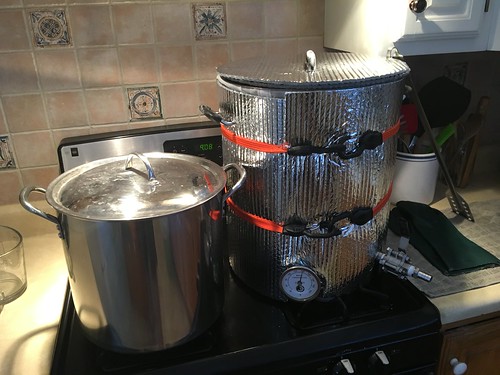 Using both burners seemed to help, and I was able to shave off not-quite-half of the time otherwise spent waiting for the strike water to heat up. So that was nice.

The other thing I decided to do with this beer, in trying to keep with the style, was to attempt a step mash. I mashed in at 148°F and held it there for a beta rest of about 25 minutes. Meanwhile, I heated the remainder of the mash liquor in a separate pot and when it got to boiling, poured that over for the alpha rest. This had a couple of hiccups (i.e., took longer to heat the second infusion to boiling than I thought) but nothing catastrophic.

I got the double-burner action going on the stove for the boil and followed along with my instructions. 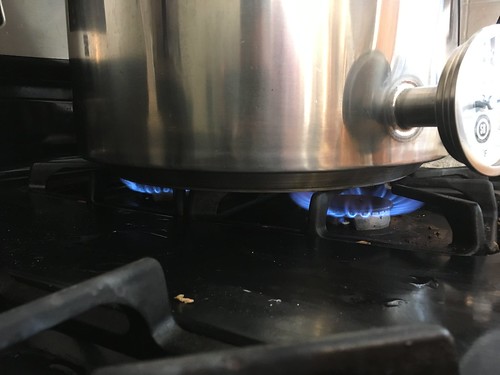 After about four hours in the fermentation chamber, the wort had cooled to about 48°F. I pitched a 1700 ml starter of 2124 and bumped the controller to 50±1°F. I had some visible activity in the blow-off bucket by +46 hours, not to mention some fairly healthy-looking krausen. Another day or so later and I was getting some sulfury smells, but those blew off after another couple days.

Twelve days into fermentation, I took my first gravity reading: 1.007. Two days later I bumped the temperature up to 65±1°F for a diacetyl rest. After two days of that, I took another gravity reading (1.007 still) and proceeded to keg the beer so that I could lager it for a few weeks.

This turned into a case of good news/bad news. 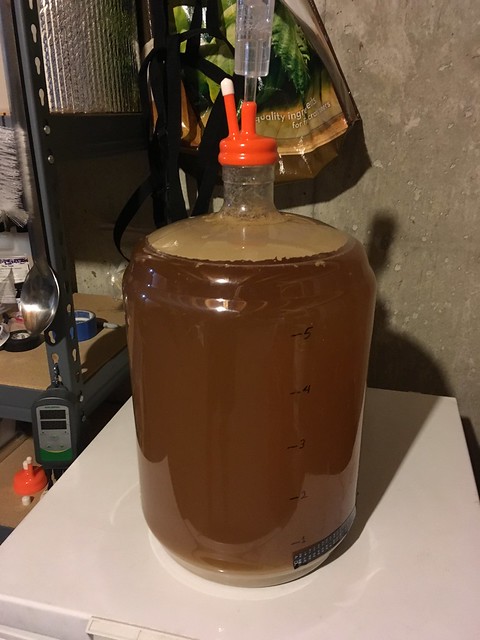 The good news: I had plenty of beer in the carboy. Arguably more than I’d ever had following any fermentation.

So what was the bad news? I failed to notice that the volume of beer exceeded the volume of the keg I’d siphoned it into. Whoops!

Well that was only about a pint and a half that overflowed. No big deal. Easily cleaned up with a towel or two.

But then I purged the headspace with CO₂. Except there was no real headspace to purge. So when I pulled the pressure relief valve, it sprayed me with fine mist of aerosolized pilsner. Sure OK. Clothes can be washed, etc.

It’s hitting the marks for me. Crisp. That touch of pilsner sweetness. That assertive bitterness to balance it. 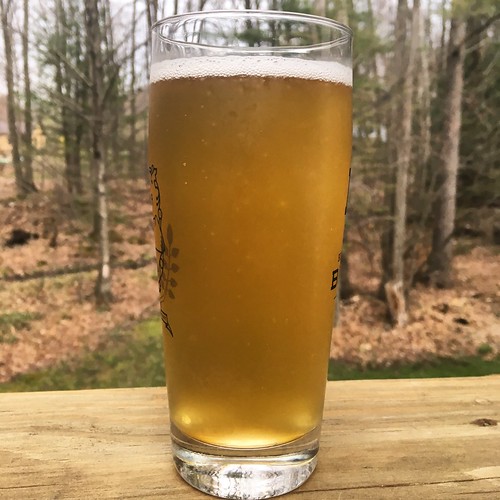 FLAVOR. Grainy-sweet malt with mild cracker and moderate toasty bread behind. Moderate floral hop flavor. Assertive bitterness. Clean fermentation profile (no esters, no diacetyl). There’s a semi-sweetness in the finish but the overall bitterness contributes to the overall dry impression.

MOUTHFEEL. Medium-light body. Moderately high carbonation. Crisp, though I’d like it to be even a little more so. No perceptible alcohol. No astringency.

OVERALL IMPRESSION. A good pils, and one that’s easy to drink. It has enough flavor to be interesting, though there are some areas where it could be a little stronger. The hop character (for example) while within the style guidelines could stand to be a little more pronounced. Otherwise, happy with ingredients here and most changes would be on the process side. Speaking of which…

The first thing that comes to mind for tweaks process wise is to get my system for step mashing dialed in. I need to look at other step mash schedules and compare them with what I did here. Getting that figured out, especially with respect to the beta rest, will probably help get me the fermentability and body I’m after.

An additional ounce of Sterling at flame-out would help to boost the hop character. The other possibility would be to switch from Sterling here to something like Perle.

This beer could also stand to be a little clearer. Fining with gelatin prior to racking to the lagering vessel would probably be enough to get that to where I want it to be.

All that said, with less than a week to go before the party — I’ll be happy to be pouring this one.

The all-grain (BIAB) recipe for Grünberg Pils is as follows:

Starting with the Champlain Water District profile as a base, target Dortmund water in Bru’n Water: