Not immune to hype and novelty, the Green Mountain Mashers (the local homebrew club, of which I am a member) caught wind of a little style catching on in San Francisco: the so-called Brut IPA. The more adventurous and experimental of us immediately started digging into whatever resources we could find.

Not surprisingly, several of us almost immediately hammered out first-stab recipes. Also not surprisingly, there was a lot of overlap among those recipes. (What’s that saying about “great minds”…?) Rather than duplicate efforts (and spend way way more on the Amylo 300 enzyme than we needed to), we converged and planned out a 70 gallon club brew.

I took home a 4.5 gallon share that became the Peraridus1 Brut IPA:

We read everything that we could get our hands on with respect to the emergent Brut IPA style. The defining characteristics (later “confirmed” in this interview with originator Kim Sturdavant) seemed to be:

For what it’s worth, we pulled together an abbreviated and very rough approximation of BJCP-ish style guidelines:

COMMENTS: Majority of hopping should be done post-boil.

And while it seemed like one could pull this off with “just” a low-and-slow mash (i.e., high diastatic-power base malt plus adjuncts, mashed 90+ minutes in the mid-140s °F to maximize beta amylase activity) — the “secret” seemed to be in using some kind of addition of a concentrated amylase enzyme to break down every possible starch into simple, easily fermentable sugars.2

After a bit of exploration, we settled on Amylo 300 — in part because that was what Sturdavant said he’d been using, but also because we became aware of several different kinds of “amylase enzyme” available for sale and (surprise!) they’re not all the same, and the Amylo 300 seems to be the most… thorough.3

From there, we worked out a pale-as-possible recipe with pilsner malt and flaked rice, worked out the logistics for brewing 70 gallons at once (spoiler alert: it was a three kettle operation), and lined up some delicious hop combinations.

Once again, Aaron was kind enough to host a bunch of us brewing misfits for some mega-BIAB action. Between his 30 gallon set up and the generous help of some other club member mash tuns, we generated somewhere in the vicinity of 70 gallons of wort. 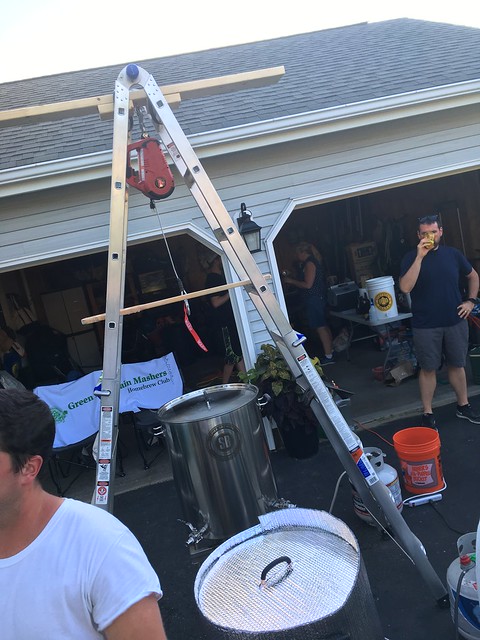 I missed the opening ceremonies (as it were) but by the time I got there, at least one mash was complete and the others were nearing their respective ends. According to the brew sheet, each mash was at a 149°F for 60 minutes. From there, we would do the respective boils (60 minutes each) and then hit each with a large dose of hops at 160°F for a 15 minute whirlpool. We had enough kettles and burners to go around, but we staggered each boil because chilling was our bottleneck. 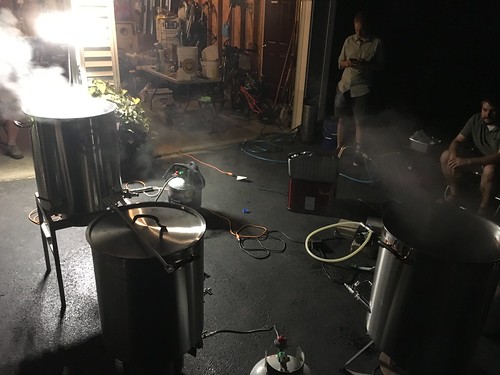 When all was said and done, we had:

(BONUS: one person ran off some second runnings from one of the mash tuns to do a parti-gyle in a turkey fryer that came to about 3 gallons that he hit with some Hallertau.)

I took home 4.5 gallons of the Galaxy + Vic Secret wort (because that’s what I planned for). Some people took home “blends” of the three different worts. Everyone took home 1 ml of the Amylo 300.

It was late by the time I got home, but I pitched my starter of 1056 and crashed into bed.

The starter had been sized for 4 gallons at 1.052, so it wasn’t too bad of an under-pitch with the extra half-gallon. I pitched at 70.7°F and set my controller for 64±1°F. By +20 hours, there was definitely some vigorous bubbling happening in the blow-off bucket.

I took the first gravity reading at +66 hours. I pulled a small sample and put it on my not-so-trusty refractometer. I spied 5°Bx which BeerSmith told me was 1.000 which… not a chance. I recalibrated the refractometer and took another reading: 6°Bx this time — so more like 1.009 with all the right calibration calculations applied. That made more sense, and seemed like it might even be the “natural” finishing gravity.

It’s at this point that I added the 1 ml of Amylo 300. I ramped up the controller to 68±1°F and then once it reached that temperature, I reset the ceiling to 72°F and allowed the fermentor to free-rise.

At +132 hours, I took another gravity reading. Having calibrated the refractometer this time, I was a little more trusting when the 4.2°Bx reading converted to 0.997 S.G. That still seemed “too low” but not “ridiculously low”.

I pulled another same, this time enough for a hydrometer reading and confirmed that the beer had finished at 0.999. 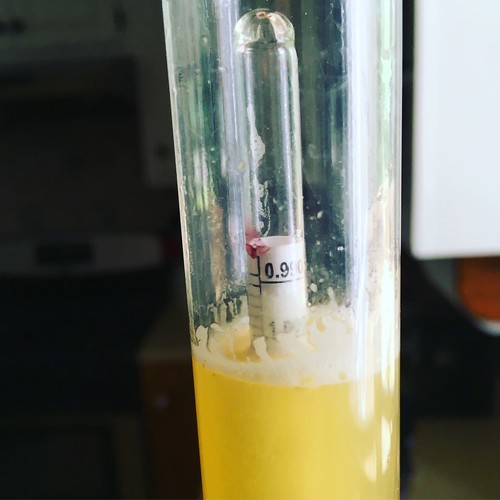 I added my dry hops (2 oz. each of Galaxy and Rakau) and let this go for three days. After that, I cold crashed and fined with gelatin.4

(And while we’re on the subject… it seemed to generate a lot of trub!) 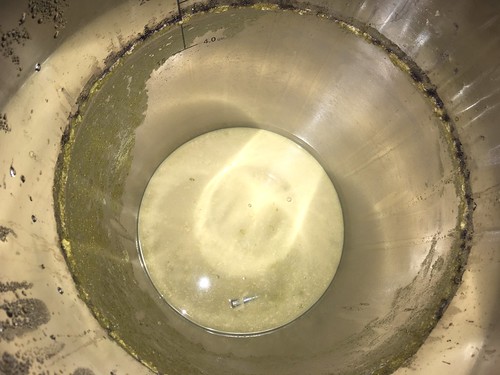 After a few days with gelatin at 40°F, I transferred to a keg and put it on gas at 30 PSI for 62 hours before venting the headspace and dialing the regulator down to serving pressure. 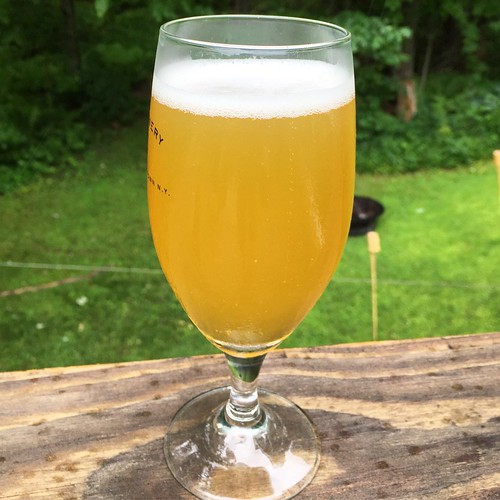 AROMA. Malt aromas are in fact very low; a tiny bit of sweetness evocative of a honey-coated cracker, but even then just whispers of that. Almost nothing in the fermentation department — no DMS; nothing phenolic; esters hint at rose petals. Hops are on full display here. Oddly though, each aroma is like two things in combination. Peach and mango. Grapefruit with pineapple. Lime over tangerine. Passionfruit and apricot. (More less in that order of descending intensity.)

APPEARANCE. Very pale. Holding it up to my AIH SRM lanyard, I’d put it at 2-3 SRM — which is more/less where BeerSmith estimated. It’s not brilliantly clear, but it’s certainly more clear than Hoarder Intervention #1 or Clone in the Window or damn near any other heavily dry hopped IPA I’ve made in recent memory. Early pours are suffering from a little sediment (did you see how much trub there was??5) but I think this will clear up soon. So on that note: “good” clarity overall, and “actually pretty great” for something so heavily dry hopped. A tall white head forms, but it’s sparse (loose, airy foam) and fades quickly. My intuition tells me that this is the high proportion of flaked rice at play — but I’ll need to research that further.

FLAVOR. Largely follows aroma. Malt impressions evoke a “honeyed cracker” but are of a mild intensity, almost background. Fermentation characteristics are clean; no perceptible DMS nor diacetyl nor phenolics; esters present retronasally at threshold like roses and orange blossoms. There’s a notable alcohol presence; it’s not “hot” exactly, but it’s tip-toeing that line between “significant” and “unpleasant”. (For me, it’s not distracting though it does flirt with it.) Hops, again as with aroma, seem to present as “fruity pairs” though the combinations are little changed up: pineapple and grapefruit; lime and passionfruit; mango and tangerine. Bitterness seems balanced, asserting at the finish, and noticeable without being strong. It has a bitter balance (which helps me to “agree to” the IPA part of the name) but leaves me with tropical and citrus fruit impressions.

OVERALL IMPRESSION. Refreshing, very dry, very much hop-forward beer with tropical and citrus fruit notes all over the place. Some faintly floral esters, but those seem to work in its favor. Alcohol warmth is significant and could be a turn-off to some; I suspect that this aspect of this style is the hardest to predict and the hardest to balance, especially when considering just how dry and light the finished beer winds up being. I don’t know that it’s the “anti-New England IPA” like some people have claimed, but I’d certainly put myself in the camp of “anti-Milkshake IPA” if anyone is lining up for that.

While I don’t know that I’d make it again, here are some retrospective thoughts:

And in the interest of thoroughness, here’s one other club member’s “mini-rant” about the emergent style:

…solely using Paddle On as my benchmark Brut IPA […] I trust it’s largely on-par with the prescription for the style. My reading of the style, considering the specifically-chosen Brut term, is that the goal is emulate, with beer through brewing technique, a classic Brut Champagne.

These wines are bone dry. They are light-bodied and excessively effervescent. They (as with all wine) have the expectation of crystal clarity. It’s very much a showcase of the fermentable substrate without a lot oaking. They’re clean wines.

I suspect most canned Brut IPAs will be woefully undercarbonated. Most lines aren’t going to go through the hassle of jacking up the CO₂ on a line that’s otherwise dialed in for the common beer going through.

Paddle On is evidence that reaching 0° Plato doesn’t mean a whole lot with regard to getting to a Brut product. The high level of hopping gives the NEIPA viscous mouthfeel that largely masks both the malt character and creates an unnecessarily cloudy product.

IMO, if Brut IPA wants to be an actual new thing instead of a marketing thing, it needs to differentiate itself from NEIPA in a way that can be materially differentiated by sensory evaluation.

And I think that’s a fair evaluation.

From my perspective, here’s where I land:

As for my own Brut IPA…? I’m happy enough with it. I might enter a few in competition (though puzzling out which category will be the tricky part), and it will be fun to share this with the rest of the club members. The rest I’ll happily put down into my belly.

The all-grain (BIAB) recipe for Peraridus is as follows:6

Starting with the Champlain Water District profile as a base: …just filter it to remove any chlorine.

Peraridus, a Brut IPA by Tilde Gravitywerks, with wort from the Green Mountain Mashers

One Response to Homebrew #66: Peraridus