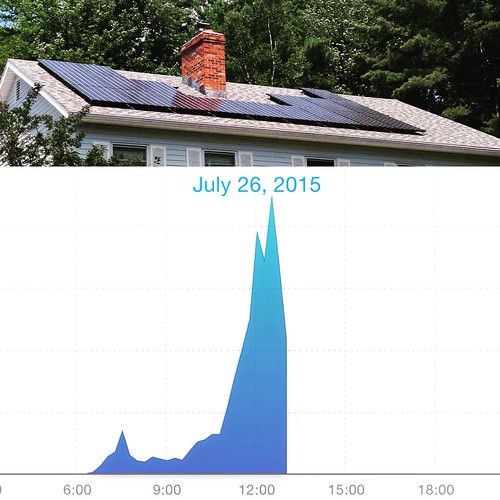 But I’ll tell it straight: when we went with our solar project last year, I knew in my bones it was the right thing to do. And a year later, looking over the data, I’m even more sure of it.

On those sunny months, we’re putting out around 2510 kWh2 — which equates to the greenhouse gas emissions resulting from about 4121 miles driven in a gasoline-powered car; or the CO2 emissions from about 1859 pounds of coal burned for electricity; or (more positively) the carbon sequestration from 44.4 trees over 10 years of growth.3 Even on our poorest months,4 we are still producing around 262 kWh and offsetting about 194 pounds of coal burned for electricity. Reflecting on the total for the year, we’ve produced around 23969 kWh — which offsets the annual electricity consumption of approximately 2.3 homes.

UPDATE: I tweeted about this post and it got a little buzz. Some of which was @SunCommon’s that cited the video in which yours truly makes a small appearance.