Inspired by Tazo’s Passion herbal tea, this brew was intended as an early Xmas present to my wife,1 who had expressed a fondness for it,2 and was looking for something special to drink over the holiday break. Thus was born the formulation for Cupid & Psyche:

In the initial assessment, it was the rose hips that had us intrigued. This should not have been surprising; after all, rose hips were the unique flavor that first had me swooning over Southern Tier’s Compass sparkling ale. With a Xmas brew in mind, I began work on this formulation in October of 2015.3 The tea itself has a lot going on: hibiscus, orange peel, rose hips, passion fruit extract, licorice root, cinnamon, and lemongrass. I drank quite a few cups figuring out which flavors were most prominent, and which I could mimic through yeast or hops. After several months, and after starting over an equal number of times with different base styles, I eventually settled on a formulation that seemed like it could work.

My original idea of using British pale ale (BJCP 11A. – 11C.) seemed like it would be too malty. Australian Sparkling Ale (BJCP 12B.) was another option but that style has too narrow of a definition. A Belgian pale ale (BJCP 24B.) was a strong contender for a while, but the characteristic yeast might interfere. An APA (BJCP 18B.) or a Blonde Ale (18A.) were both fairly safe, but… I wanted something stronger. This more or less left me with that fun catch-all: American Strong Ale (BJCP 22B.).

Having finally settled on a base style, a full year after first getting the idea, I was happy with how the formulation looked and was ready to brew.

I fired up a starter for my yeast (WLP001) two days ahead of time. This was later of a start than I would normally prefer, but all things considered, I decided pitching the whole starter (supernatant and all) without decanting would be fine. 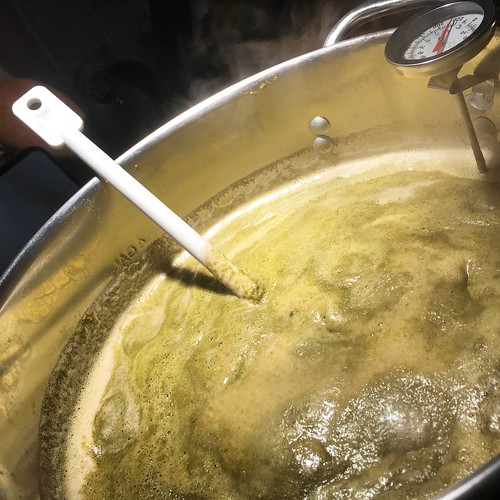 After chilling, I had about 2.5 gallons at 1.147.4 I added 2 gallons of water to the carboy, transferred the wort, and topped off with another half gallon. I took another gravity reading, noting that the wort was 66°F; after adjusting for the hydrometer’s temperature calibration, and adjusting again for the +4 offset, I settled on 1.073 as my original gravity. That’s six points off from my target (1.079) but close enough considering I’d also “over-planned” on fermentables to compensate for this (more on that later, vide infra). 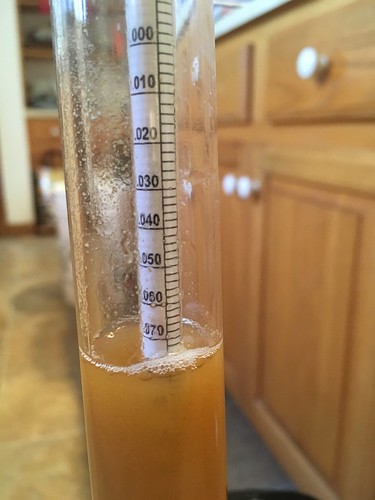 Satisfied with the initial conditions, I shook the carboy for two minutes to aerate, pitched, shook a little more, and moved it to the fermentation chamber.

A Brief Aside About My Gravities

When formulating this batch, I’d targeted 1.079 as my O.G — and I’d targeted that because I’d historically6 been 4 points below that targeted gravity. My thinking here was that if I wanted a 1.075 beer then maybe I should shoot for 1.079 and let the averages work in my favor. So coming in at 1.073 was that 1-2 points off… from the 1.075 which was -4 from the 1.079 target and… I can’t shake the feeling that instead of “nailing it” by planning my actual starting gravity around the average margin of error, I just further blew it by landing at an additional two points below that.

GRANTED: I probably should let all that go. After all, I am going for flavor. And I can get a great tasting beer without fussing over gravity. But I’m also the son of a molecular biologist and I’ll be damned if I can’t master the science of mashing. So all that business about not being able to get my gravities right is bugging me.

Then I get my first copy of Brew Your Own magazine and I’m reading some of the “fine-print” in the front matter and I see where they call out that their recipes are published assuming a 65% brew house efficiency. Looking at my formulations in BeerSmith, I see that I’ve been using 72%. So that, combined with the fact that I only just recently7 discovered that my hydrometer has an offset… And (well…) that goes a long way in explaining the factors that have gone into my confusion.

Having connected those dots, I feel like I’m starting to get a clearer picture of how I came to get these “bad” estimates, and how I can go about getting better estimates going forward.

End of Aside; Beyond Brew Day

File this one under I Should Have Known Better… 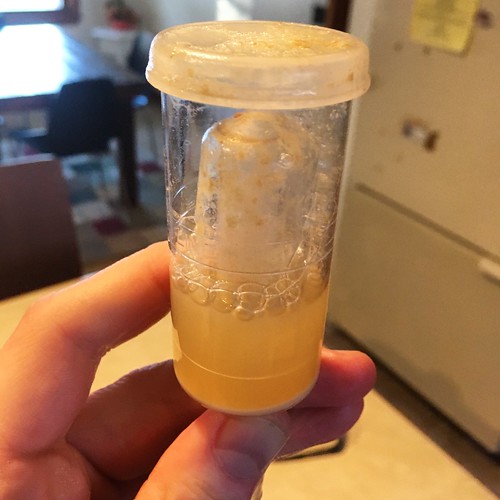 At +17 hours post-pitch I had a nice, thick, very healthy-looking cap of krausen. Peeking in on it again after a few hours, that same krausen was collecting in the airlock. “Should have used a blow-off tube,” I told myself. Which is funny because so many other brewers tell me that this is just part of their normal routine — but it’s just not something I think of until it’s too late. Anyway… I had to swap out the airlock twice before things settled down.

A week after pitching, I took a gravity reading and found that it had dropped to 1.011. 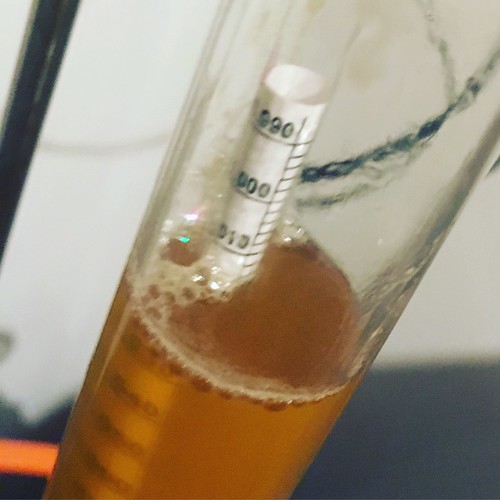 At this point we were about to leave for our Thanksgiving trip so… I gently roused the yeast and unplugged the temperature controller. Given that I typically let a beer sit about two weeks in primary, and given that the basement’s ambient temperature was about 65°F, it seemed to me that the timing had worked out perfectly.

Fast forward another week and we return from our trip; another gravity reading and we’re still sitting at 1.011. As such, it was time to rack it over to the 5 gallon carboy for a little conditioning. 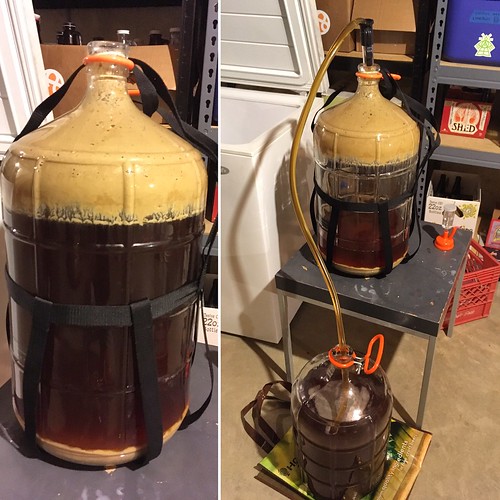 Because “2 weeks primary, 2 weeks secondary” had worked out well for several brews over these past two years, I decided to run with that. Once it was racked, I let the beer sit for about a week and a half. At that point, I added 2 ounces of Mandarina Bavaria for dry-hopping and 1 ounce of rose hips. Those sat for five days. Then I pulled the flavor agents8 and transferred the beer (which was smelling great, thanks for asking) to a keg.

Four days under approx. 24 PSI; vent the headspace and lower to 12 PSI, then let it sit for another four days and… We’re pouring a lovely American Strong Ale.

It turned out a little cloudier9 and slightly darker than I expected but that’s OK — the aromatics and flavors more than make up for it. The Mandarina Bavaria dry-hopping shows with a lovely wash of citrusy orange aromas and up-front flavors. The rose hips add a fresh botanical note that’s hard to place but really rounds it out. I personally don’t pick out anything that is distinctly contributed from the licorice root — but the overall profile works. A fairly aggressive bitterness at the finish, but I’d say it’s well-balanced with the starting sweetness.

Most importantly, my wife loves it.

I don’t know that I nailed the original flavor target (i.e., that Tazo Passion tea) but it’s certainly drinkable. Perhaps dangerously so considering the 8.3% ABV. Would I brew it again? Very likely.

The partial mash recipe for Cupid & Psyche is as follows.

One Response to Homebrew #27: Cupid & Psyche