I have a love/mostly-hate relationship with wheat beers. Most of the wheat beers I’ve had, I could do without; it’s either “too much banana ester!” or “ugh too grainy!” But once in a while there’s one that’s just right. It’s hard to put my finger on it. In an effort to get there, I thought I might make one of my own, just to see if that might help me on the quest of discovery. Thus: Codependent Droid: 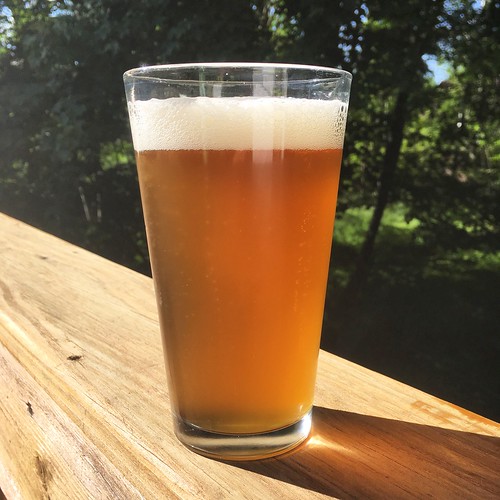 Before we dig into the story of this particular beer, an acknowledgment: my wife came up with the name. Last summer we were sitting on the back porch after dinner and I challenged the family to come up with good names for beers. Codependent Droid — a nod to C-3PO — was her best offering from the night. I couldn’t get the name out of my head and given his golden color, I thought: Why not a pale gold wheat beer?

My first pass at this beer’s formulation was admittedly tame: a mix of malted wheat and 2-row; Nugget and Mandarina Bavaria for the hop schedule; and Wyeast’s 1010 strain.

I revisited the formulation several times over the next couple of months. I added a small percentage of acidulated malt as an experiment in modulating pH. Next I switched from Nugget to Centennial as the main bittering hop, mostly to cut back on the alpha acids. I decided to dry hop with Mandarina Bavaria in addition to the whirlpool addition. Then I opted to switch from the 1010 strain to Wyeast’s 3068 (Weihenstephan Weizen) strain, with the intent of making this a hybrid of an American Wheat Beer and a more traditional German Weissbier. (“American Weissbier”, anyone?)

Lastly, though I’d intended to make it a 3 gallon all-grain BIAB batch, I had also come across this AHA article and thought: screw it, I’m doubling down on my partial mash approach!

As has been my habit recently, I decided to over-build the starter so that I could harvest some for my next batch. I calculated my pitching rate, doubled it, and built a “modest” 1500 ml starter. That said, I learned all too quickly what they say about 3068’s prodigious krausen production… 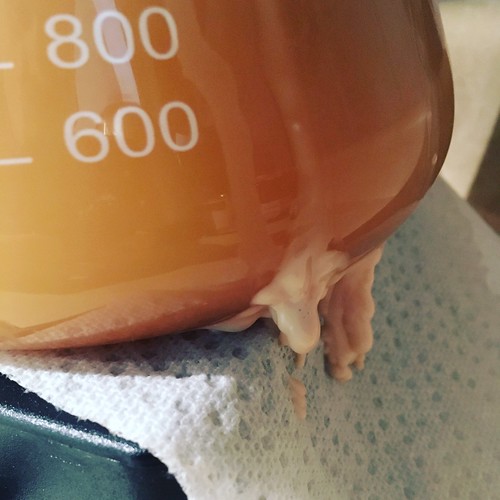 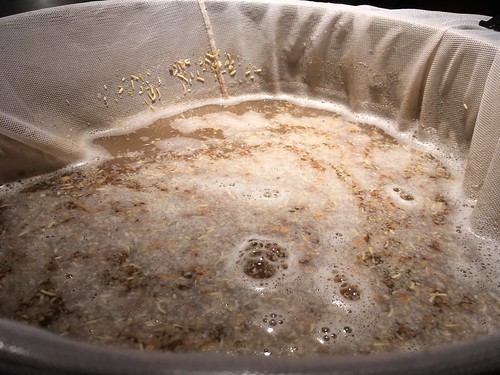 Fifteen minutes into the mash, I took my pH reading (5.21). After that, I let it finish out the 90 minute mash. I skipped the mash-out and did a little post-mash science: 1.040 after pulling the bag; 1.048 after squeezing the bag; 2.9 gallons of wort collected. 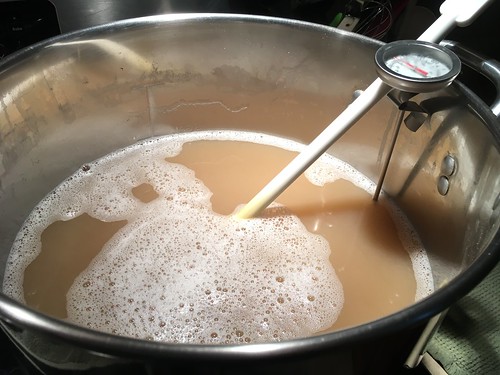 By 9:30am, that wort was boiling and I moved ahead with the formulation: 1 oz. Centennial at 60 minutes, the 3.3 lb. can of Briess wheat LME at 15 minutes.3 When the boil finished, I chilled the wort to 150°F, added 1 oz. of Mandarina Bavaria, and whirlpooled for 15 minutes. After the whirlpool, I chilled it down to 68°F. Post-boil science shook out as follows: the wort had a gravity of 1.089, I had about 2.9 gallons of wort in the kettle, and so diluting it down to the full 5 gallons would give me an O.G. of 1.052 — and the final hydrometer reading backed that up.4

I pitched my yeast at 11:30am and got the carboy into the fermentation chamber and locked in at 68±1°F. 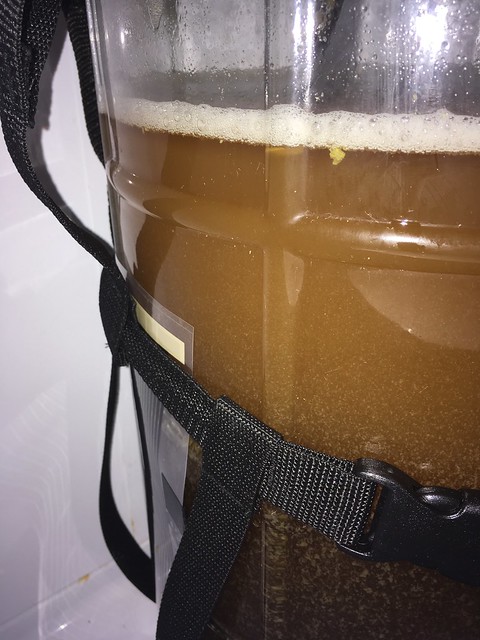 Within 24 hours, I had a nice, big, rocky-looking cap of krausen visible in the carboy. A fair amount of it was blowing through the blow-off tube into the bucket, too. After about 5 or 6 days, the bubbling activity in the blow-off bucket had largely stopped, and the krausen had mostly fallen. I took my first gravity reading at that point and found it had come down to 1.012. The little taste I took was promising: dominant citrus notes, a hint of banana ester, and a strong wheat backbone without being overly grainy. I was excited. 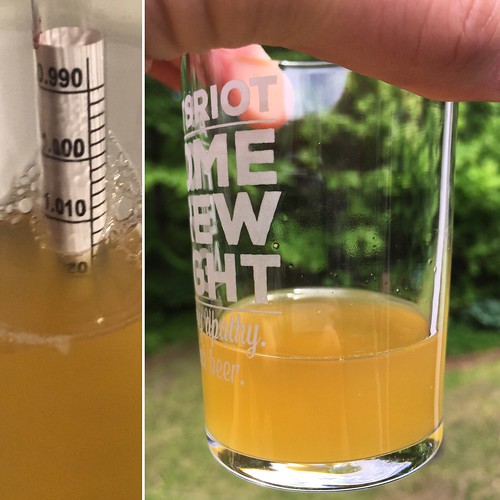 I took a couple more readings over the next few days. Ultimately it finished at 1.010.

From there, I racked over into secondary, harvested the best layer of the yeast cake, and added the dry hops. 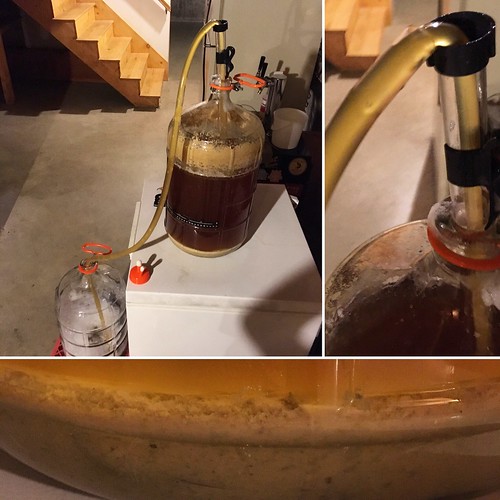 The beer conditioned on the dry hops for three days before I cold crashed it (overnight), fined with gelatin (two days), and kegged it.5

From here, the timing worked out great. I kicked my keg of Let the Wookiee Win the next evening, put this batch on gas, and promptly left for vacation! 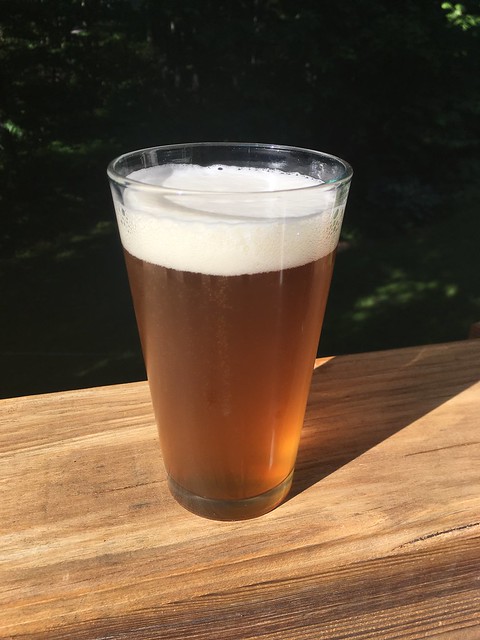 While Codependent Droid did not turn out exactly as I’d envisioned, I was still happy with the results. Aromatics deliver the citrusy-tangerine I’d imagined, though less intensely as I’d hoped; the malts provide a supportive bready note, and while the yeast deliver some banana ester character, it’s minor. There’s a tall, white, foamy, long-lasting head; it’s a lovely pale gold, though not as clear as I’d expected given the finings. The flavors start with a mix of malty-sweet and citrus, getting more bitter as it goes over the palate. Mandarina Bavaria’s tangerine is weaker on the tongue than it is on the nose, but the predominantly wheat grist delivers a solid backbone with flavors that are moderately grainy with equal parts bread. Again, the banana ester character delivered by the yeast is noticeable, but nicely restrained. Mouthfeel is light-to-medium body, with a mild carbonic bite, and low astringency. The overall balance wound up a little more bitter than I’d intended, but not unpleasantly so.

After the first two glasses of it, I began to think: There’s something familiar about this beer… After the third one, it hit me: Cupid & Psyche was dry hopped with Mandarina Bavaria also! And it was then that it occurred to me that perhaps Mandarina Bavaria doesn’t deliver as intense of a tangerine note as I’d believed — at least not on its own. On the other hand, it certainly seems to enhance the bitter qualities. This goes against much of what I previously understood about whirlpool and dry hop additions, but… perhaps there’s something about this varietal that does this? Or perhaps there’s something else out of balance here that I need to consider?

Either way, I would make this beer again. Next time, I would consider: (1) doing something to boost the malty-sweetness aspect to bring it more into balance; (2a) doubling the Mandarina Bavaria in the dry hops, to bring out more of the citrusy/tangerine character; and/or (2b) taking a page from the latest (May/June 2017) issue of BYO and finding another hop varietal that might synergistically boost that citrus character; and lastly (3) ferment 1-2°F higher to encourage slightly more of that banana ester from the 3068. (But only slightly.6)

The partial mash (BIAB) recipe for Codependent Droid is as follows.