Long time readers of these beer-brewing chronicles will nod in understanding when I say that I like brewing with rye. I like the spicy flavor. I like how it typically dries out a beer. And as a (mostly) BIAB brewer, I haven’t had to fuss with its notorious lautering issues. When I had yeast left over from Codependent Droid and Awkward Gingham, I wondered… What else could I ferment with that 3068? Naturally, the answer was to make a Roggenbier, thus Count Roggen! 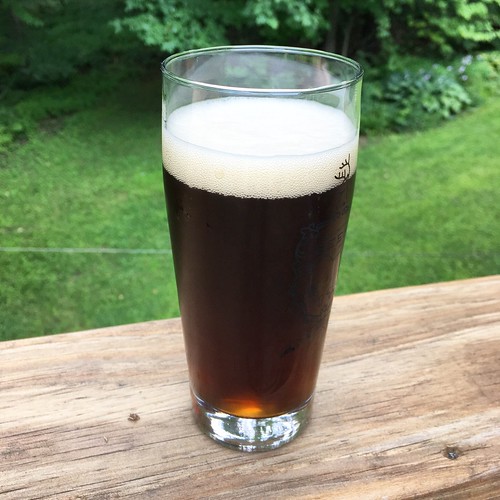 Some of you may be thinking: Seriously? Three (basically) wheat beers in a row? I thought you didn’t like wheat beers? And not only that but… a Roggenbier? Which even the historical style guidelines as “[never] a widely popular style”?

And I’d remind you: but… rye! And also that I’d set out to try my hand at re-using yeast as often as possible during 2017 and I had all that 3068 slurry left over.

Rather, in this particular case, I had about 100 mL or so of the slurry but it was also from May 29th and pushing six weeks or so. So given the conventional wisdom around the yeast viability, I had to use it soon if it was going to be usable at all. I got a 1200 mL starter going a couple days ahead of time. 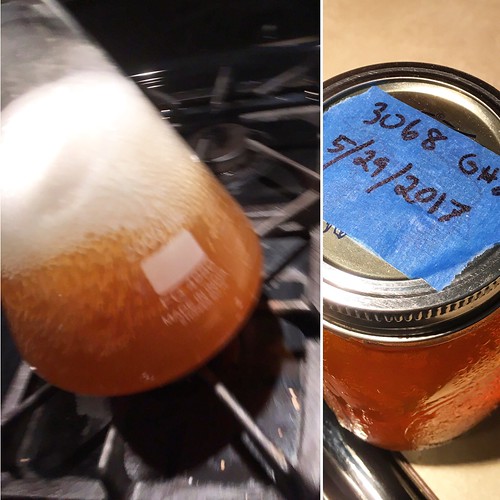 And as usual with this strain, it krausened the foam stopper right out. 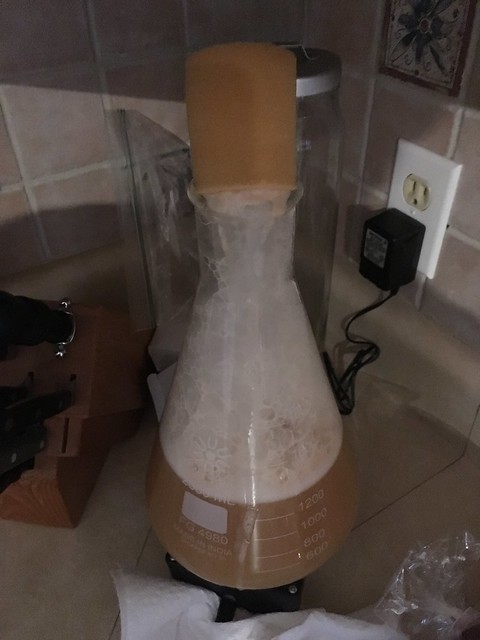 I decided to jam this brew in on a Monday night. I got my strike water together to heat while we ate a quick dinner, making a few last minute corrections to adjust the body (from light to a more appropriate medium) and to lower the mash volume slightly such that it wouldn’t overflow my kettle. That just barely worked out. 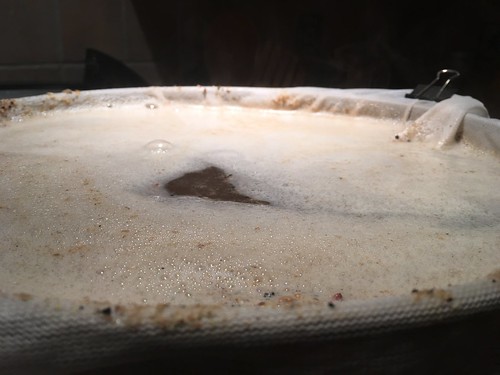 This was also the first time that I decided to mess around with the water chemistry. Having worked out what the local tap water’s profile looked like, I opted to add 0.4 g/gal of gypsum and 0.2 g/gal of epsom salt. Unfortunately my scale, despite having a setting for grams, didn’t have a fine enough resolution for this and I wound up guessing.

I mashed in at 153.8°F and left the top of the kettle off for a few minutes to let it cool to 152.1°F. Once it reached the correct temperature, I covered it and wrapped it up in towels for 75 minutes. I pulled the bag and looked like I had approximately 3 gallons of wort. I did my usual bag squeezing and was able to get about another quarter gallon. My pre-boil gravity was 1.035 which was seeming a bit lower than BeerSmith told me expect.

Regardless, and to paraphrase an old aphorism, we go to boil with the wort we have. Sixty minutes and an ounce of Saaz later, approximately 2.75 gallons at 1.044. About 6 points shy of where I’d wanted my original gravity to be. I pitched my yeast, stuck the carboy in the fermentation chamber, and went to bed — saving my retrospective for another day. 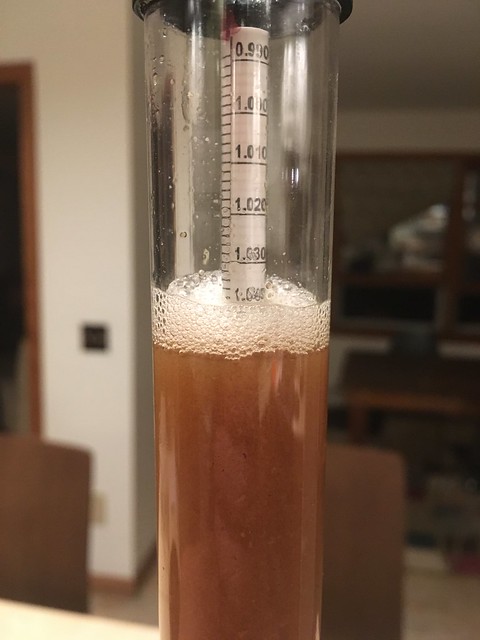 While the yeast got started the next day, I took down a bunch of notes and compared this batch to several other recent batches. I looked at grist composition (especially the percentage of rye), mash thickness, mash temperature, mash length, heat loss, pre-boil gravity, post-boil gravity, the deltas between target O.G. and actual O.G…. So many variables.

I was left with some open questions. Did I have enough diastatic power for the mash to fully convert? (The evidence suggests that I did.) Was there less potential extract in those grains than I’d expected? (Possibly, but unlikely.) Could I have had dough balls that went undetected? (Possibly, but I doubt it.) Could my mineral alterations have hurt me here? (Possibly, but I tried to err on the low side.) What else?

I didn’t arrive at any firm conclusions. I was tempted to blame mash thickness, but at 2.43 qt./lb., that should have been fine. Not enough diastatic power? Well, rye is supposedly fully convertible so…

A challenge for another day.

Pretty much went just fine, thanks for asking. 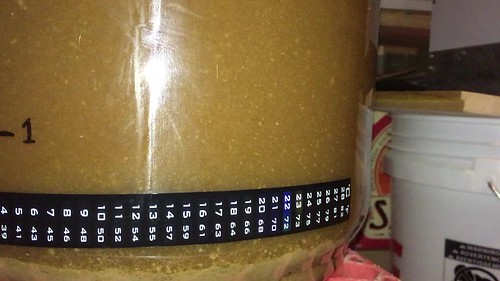 I had bubbling in the blow-off bucket within a couple of hours. I let it do its thing for a week or so and it finished at 1.012. 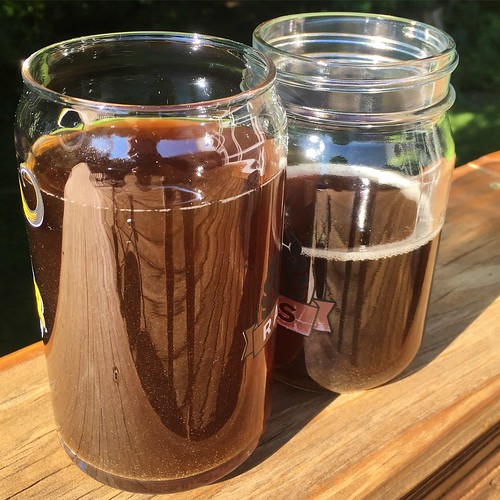 To be honest, I was skeptical throughout the brewing and fermentation process. Whenever I took a sample for gravity, I grimaced a bit. “I don’t think I’m going to like this.”

But some carbonation and the proper serving temperatures straightened it out — it became something drinkable.

Aromas lead strongly with rye and dark bread; moderate clove and banana come through over a light touch of floral Saaz. In the glass it’s a deep copper with garnet highlights and a tall stand of tan foam that persists for a good long while. In the mouth it starts with pronounced bread and rye spice, getting grainy mid-palate before the rye reasserts itself in the back of the mouth. The hop notes provide their own complementary spicy flavors, especially retronasally. The esters are restrained and the balance leans bitter, with a bit of sharpness at the end. While I wouldn’t describe the body as “light”, it wasn’t quite the medium body I was going for; the carbonation level was also decent but lower than hoped for. There is a slight creaminess, especially toward the finish. There’s a slight astringency mid-palate as well.

It’s drinkable, now that it’s finished, but it’s not my favorite homebrew of all time. Were I to brew it again, I would bump up the grain quantity in an attempt to hit the intended gravity. I would mash a little higher (maybe 2°F) to help with the body. I would add a little more corn sugar for the bottle conditioning. I would probably ferment a couple degrees warmer to bring out the yeast character more. No big flaws — but plenty of small tweaks could make this beer significantly better.

The all-grain (BIAB) recipe for Count Roggen is as follows.