For regular readers of this series, you’ll remember when I brewed up Prosody (Motueka) and declared my love for the New Zealand hop varietals. A little before that brew day, I’d gotten my July/August 2017 copy of BYO with its Style Profile on the New Zealand Pilsner. Intrigued, I put together a recipe similar to the one in the article. And since I’d ordered enough Motueka in the first place… add in some Pacific Jade and… Jade Weka it is. 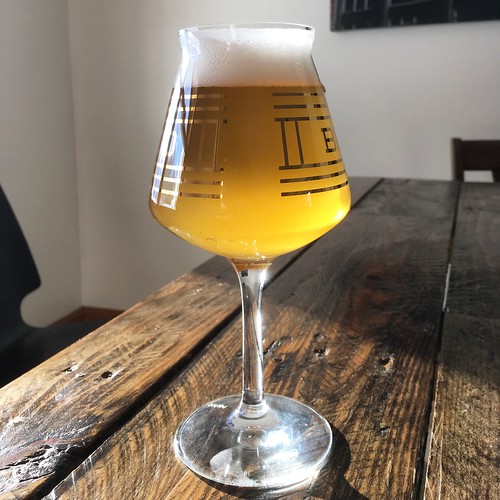 The formulation was largely built around the hops. A lot of Motueka, a moderate amount of Pacific Jade; big whirlpool charge but no dry hopping. I had some 2007 harvested from Calypsonian, so that was an easy choice for yeast. Originally, my simple grist of half 2-row and half pilsner malt was going to be supplemented by some golden light DME but then… I got a 10 gallon birthday present.

Fifty-fifty 2-row and pilsner it is!

Still having not made the full investment in the burner for outdoor (well… in the garage) brewing, I set this one up on the stove top the night before. Last thing before heading off to bed, I measured out the water I needed and then added the minerals for the profile I wanted.

That morning, I got the flame going bright and early and mashed in at 153°F by 7:00am. I wrapped the kettle in the Reflectix “battle armor” that I’d made and let the enzymes do their thing. 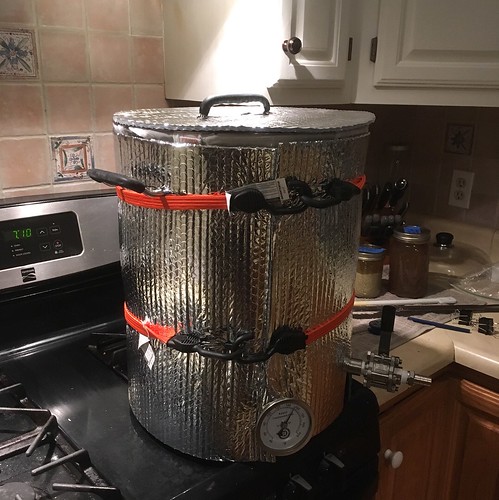 After the mash and the bag squeeze, I had about 5.75 gallons of 1.048 wort, which I promptly put the flame to again. 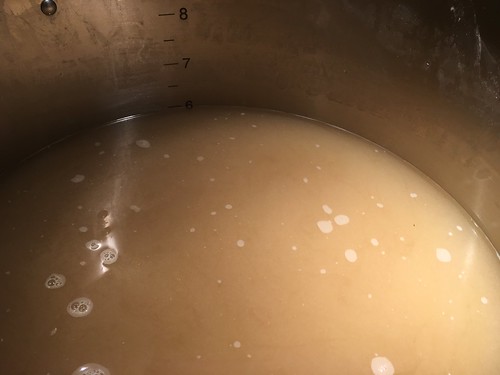 It’s worth mentioning at this point that I’d already taken down a couple of important notes. First, lifting and dealing with a brew bag for a full volume mash like this was awkward. I knew that I was going to need to come up with a better solution for this. Second, while the natural gas stove could boil that full volume of wort — it was taking a long time, and it wasn’t exactly the hard boil I was hoping to get. It was “enough” but I could do better. Lastly, carrying the kettle from the stovetop to the adjacent laundry room so I could hook up the wort chiller to the utility sink? While I was waiting for the boil, I said to myself: “Well, I’m locked in for today, but that is a hazardous enterprise I’d prefer to avoid.”

Somehow, I managed to safely complete the brew day and I produced about 5 gallons of wort at 1.059. This was a bit higher than I’d anticipated but still seemed reasonably close to the correct range. It was looking pretty nice, too. 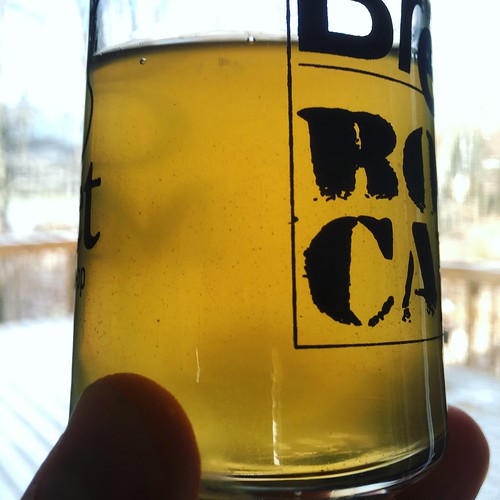 I got it into the fermentation chamber and once it was down to 54±1°F, I pitched the 2007 from its vitality starter.

I’ll admit it: I got nervous about this fermentation.

The morning after pitching, there did not appear to be any visible signs of fermentation. Nothing in the airlock. No krausen. I talked myself down from this initial ledge. It was only 20 hours after pitching; Calypsonian showed some at +15 but… wasn’t that a bigger starter? With fresher yeast? But lagers are slower to start anyway… right? 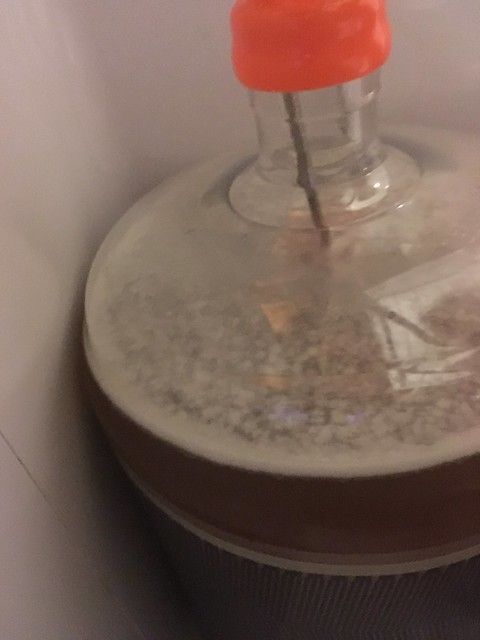 And by +68 all my fears were allayed. 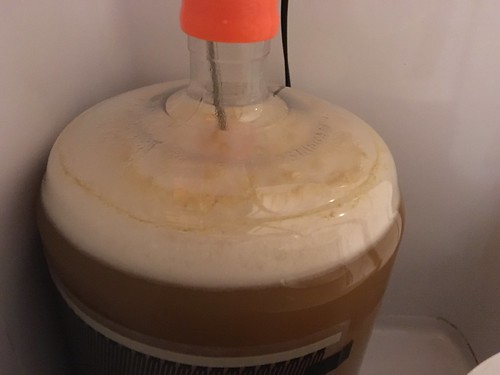 I had decided to try the Brülosophy Lager Method with this beer. So about a week after pitching, I checked the gravity. It was down to 1.021, which was approximately 63.1% of the expected attenuation. So I started ramping up the temperature a few degrees at a time, following their protocol. When it reached what appeared to be its terminal gravity (1.015) I started bringing the temperature down a few degrees at a time for the short-by-comparison lagering phase. I got it down to 35°F for a few days, then moved it to the other refrigerator where I held it at 40°F. (I needed to free up the temperature-controlled fermentation chamber for the next beer.) All in all, it had about a week and a half of cold conditioning before I packaged it.

And even without any finings, it seemed like a hell of a clear beer. 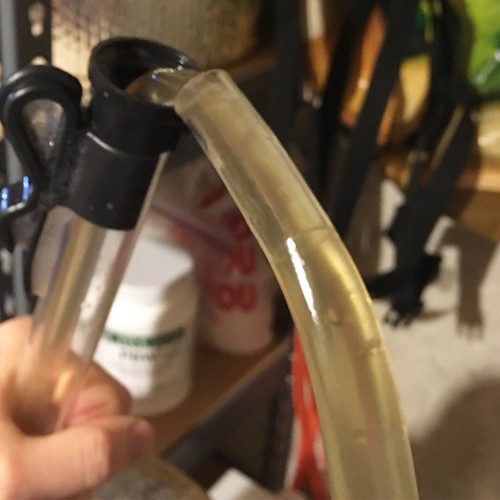 I filled 12 × 12 oz. bottles, and siphoned the rest into a keg. While I was at it, I took one more gravity reading. 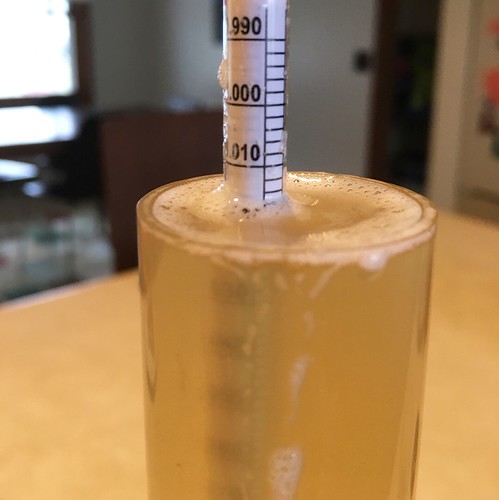 After all the calibrations and offsets? It finished at 1.012. 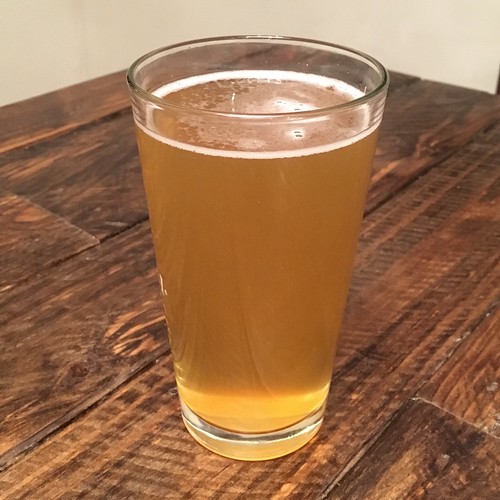 AROMA. A hop-forward nose with moderately strong lime zest, moderate clementine, and the suggestion of honeydew melon. Malt aromas seem low to me and suggest cracker with a little bit of honey. No caramel character. No significant esters.

APPEARANCE. Straw to pale yellow. When it’s first poured, it has a 2cm white head with tight foam that persists about two minutes. There’s a slight haze which is disappointing but probably fixed pretty easily with some finings.

FLAVOR. Bright and hop-forward with citrus all over the place. It leads with a sweet note like citrus flesh (think ripe clementine). Mid-palate has notes of lime zest (moderate intensity) and supportive malt, especially cracker (moderate) and a light touch of honey. The beer drinks clean with no significant yeast-derived character.1 It finishes dry with a citrusy sweetness complemented by medium bitterness.

MOUTHFEEL. Medium body. Moderate carbonation; it might benefit from a little more in the CO₂ department. No significant alcohol notes. No noticeable astringency. Pleasing.

OVERALL IMPRESSION. A citrusy, hop-forward lager with a fair amount of bitterness. It has a pleasing character and is very drinkable. Knowing its numbers, it doesn’t seem as strong as it is, and I suspect it might be even more pleasing if I could drop the gravity by a couple points.

Will I enter it into competition? Given that I set aside 12 bottles for this purpose… very probably. It may find its way into the up-coming “Make the Cut” competition. And were I to enter it into the 2018 Noonan… it might be interesting to see how it fairs as a 12A. British Golden Ale.

I suspect that I’ll brew this one again, but I can think of a couple changes that I’d make. First, I would walk back from my decision not to fine with gelatin; I thought it would be sufficiently clear but the proof is in the glass. Second, at 6.2% it’s not a strong beer but I was also looking to make something closer 5% — so there’s that. My third tweak would probably be to address head retention; perhaps a little wheat or Carapils might help there. Lastly, pending a “second opinion” on this beer, I might consider a… “more patient” approach to fermenting and lagering this beer. I don’t detect any fermentation-derived faults, but I’m open to the possibility that I’m blind to them.

All that said, this at least met my expectations and possibly exceeded them a little bit.

The all-grain (BIAB) recipe for Jade Weka is as follows:

Starting with the Champlain Water District profile as a base, modifying to meet the “Yellow Dry” profile (Bru’n Water spreadsheet):