Winter drags its ass out, Spring rolls in like a lazy bum, and Summer scratches at the door like an enthusiastic dog. And with that backdrop, we’ll need ourselves a moderate-gravity, crushable lawnmower beer. Thus, the Uncle Rico1 cream ale is just what the doctor ordered:

To be fair, it wasn’t necessarily obvious to me that I would do a cream ale for this brew. I knew that I wanted to try and brew some new-to-me styles this year, and cream ale was one of the front-runner candidates but… I just couldn’t make up my mind. May was kicking off and “Big Brew Day” was conflicting with the Noonan competitionbig and/but/so I had the day before off so… I was going to make it a brew day. The problem was that I just couldn’t decide. Luckily, my local and very helpful brew crew helped me out with a quick Facebook poll. And the cream ale won.2

I’d worked out a recipe that I thought looked pretty good. A straightforward grist of 2-row with a little flaked maize and table sugar. I compared it against a few others (i.e., the one that appears in Hughes (2013) and one from Weikert) and — feeling pretty decent about it — I decided to roll with it.

I’d recently worked out a better way of working with my grain mill, so I decided to mill those myself the morning of. Being a brew-in-a-bag brewer, I decided to step the mill gap down as far as it would go, pulverizing it very nearly to flour.

I’d heard that too-fine a crush could cause issues with astringency, but there are also plenty of folks in the BIAB community that say things work out just fine. This seemed like the appropriate place to roll the dice on that variable. I capped the milled 2-row with some flaked maize, got my water up to strike and mashed in.

Meanwhile, my buddy Aaron (you may have heard of him?) swung by to check out my recent move into the garage. He was kind enough to take a couple of pictures while the mash wrapped up and I pulleyed it up out of the kettle. 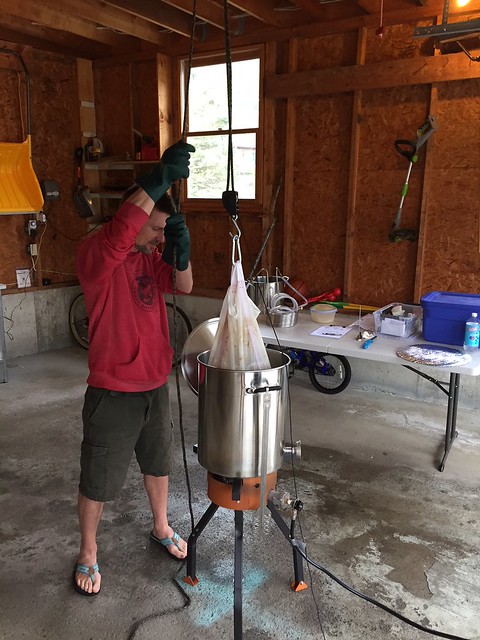 Aaron couldn’t stay all that long, so once I got the flame going for the boil I was back on my own again. (It’s OK — I’m used to brewing solo.) Things got going and from there went… pretty routinely. Followed my hop schedule. Added my nutrients etc. Chilled when the time came. With temperature calibration and offset…

From there the wort into the fermentation chamber and chilled down to 58°F.

Once the wort was at the appropriate temp, I pitched the 700 ml starter of 1007 German Ale. By +15 hours, a thick, moussey krausen was happening. By +62 there was significant krausen having chugged out into the blow-off bucket. And it was at that point that (after swapping blow-off buckets) I bumped the fermentation chamber’s temperature controller to have a ceiling of 64°F and otherwise let the fermenting beer free-rise.

By +316 hours, gravity was down to 1.007 — which would ultimately prove to be its terminal gravity.

Satisfied that the beer had finished fermenting, I siphoned it over into a keg, fined it with gelatin, and put it on 26 PSI for 48 hours to force carbonate. 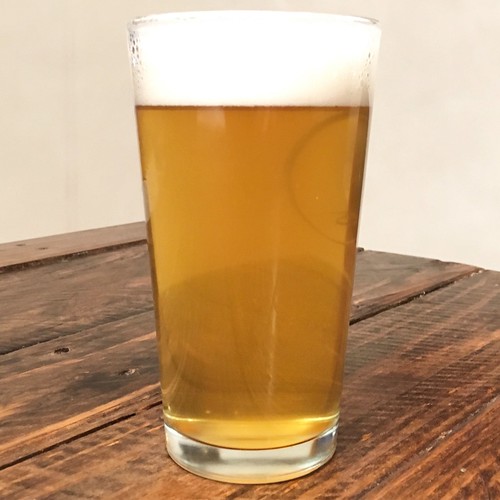 AROMA. Aroma characteristics are quite low across the board. Malt aromas are a blend of moderate corny-sweet and moderately low grainy-sweet. Hop aromas are low floral and background citrus like grapefruit pith. Light ester with hints of pome fruit like ripe red apple; otherwise a clean fermentation — no DMS, no diacetyl.

FLAVOR. Malt is moderate corny-sweet with supportive grainy-sweet (the latter increasing the strength of its impression at the back of the mouth and as it warms). Hops present as a moderate citrus like orange flesh with a low floral accompaniment retronasally. Clean fermentation character on the palate; no significant esters, no detectable DMS or diacetyl. Moderately low bitterness. Finishes with a light sweetness but dries quickly. Aftertaste is faint sweetness over a dry graininess.

OVERALL IMPRESSION. It’s recognizably a cream ale, and is fairly flavorful, though the finish could by a crisper. I don’t necessarily think it’s over-hopped, but the balance there seems ever so slightly off — like I could back off the bitterness maybe 5 IBU. (Maybe move from knock-out finishing hops to something in the whirlpool once it gets below 180°F?)

I would have liked a slightly lighter body with a little crisper finish. Perhaps mashing lower and longer for more fermentable wort? (Though I’d already used a light body mashing profile…?) I might also consider adding the 10% sugar mid-fermentation instead of in the boil? (In other words, give the yeast a significant head start on the more complex malt-based sugars before throwing in the simple stuff.)

Did it need a bigger pitch of yeast? Or something else to encourage a “more complete” fermentation? I don’t necessarily think it’s under-attenuated, but I suspect the gravity could have dropped a little more.

There is that mild astringency to contend with also. Should I pay more attention to mash pH? Or was this simply a question of over-crushing? All things considered, the anecdotal evidence tells me this beer should be quite astringent, but it’s (to my palate at least) only flirting with that so… I need a few more opinions there? My gut tells me to pick up a new and better pH meter to make sure my mash chemistry is in the correct range. My gut also tells me that I should maybe back off one step on my grain mill.

I scored it a 34, right in the middle of the Very Good range — but that’s probably generous. That being said, I’ll be drinking the heck out of these as spring turns into summer.

The all-grain (BIAB) recipe for Uncle Rico is as follows: