With spring’s warm weather on the way, I was looking forward to a crisp pale beer to enjoy after mowed lawns and spread mulch and balmy garage brew days. Last spring’s big hit was that cream ale Uncle Rico, but with three more years of brewing and about two years of judging under my belt, I felt like it was finally time to take another crack at a Kölsch. Thus, the triumphant return of Sorry Karl.

My previous two iterations on this beer (March 2015 and December 2015) both produced drinkable beers, but neither really lived up the Kölsch name. They weren’t even really Americanized versions — but more like blonde ales made with noble hops. Looking over those old blog posts, I’ll admit that I was generous in my assessment of them — but given that I enjoyed them, it’s not like that harms anyone.

That said, I wanted to get something closer to style this time around, and where I did make compromises, at least it would be with a bit more thoughtful intent.

I revisited my recipe and, given that I was going from a partial mash recipe to all-grain BIAB… I gave it a complete overhaul.1 It’s a more complex grist, but mostly incidentally. Pilsner malt provides the majority of the base, with about 15% Vienna to introduce a little toasty-sweetness, 5% wheat malt for body and head retention — then replace a portion of the Pilsner malt with acidulated for pH adjustment, and/but then because I have a bunch of American 2-row I need to use up… blend that in ounce-for-ounce with the Pilsner malt. From there? Some Hallertau2 to the 20 IBU neighborhood, and then ferment on the cool side with a big pitch of Imperial Organic Yeast’s G03 Dieter.

After the near-disaster that was the Expensive Chaos brew day, I was a little nervous to kick off round two of the warm weather garage brewing. I’d fixed my mill, but couldn’t shake the feeling that the… not-my-usual crush3 wasn’t the only factor there. Nevertheless, this Kölsch-like wasn’t going to brew itself.

I took things at a nicely leisurely pace that morning. No rushing. No multi-tasking. Just good old fashioned one-thing-at-a-time back to basics process. Collect water and add salts and split it up for the mash steps. Mill the grains. Get the flame going for the strike. Mash in at 147ºF for the first (beta) rest of 45 minutes. 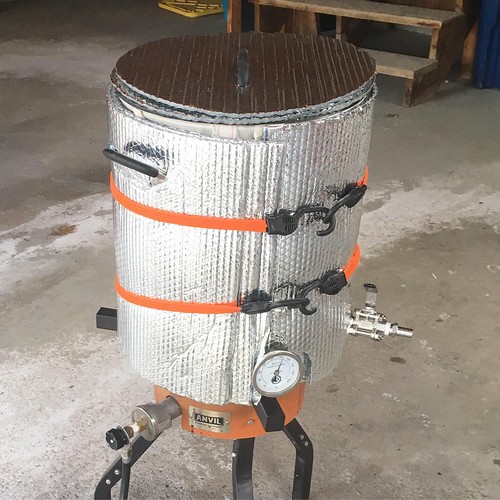 Meanwhile, got the second volume of water heating for the second step. (Took a pH reading too and more or less nailed the target at 5.26.) When the first rest wrapped up, I made the second infusion to bring it up to 158ºF for 20 minutes … which turned into more like 25 minutes because I needed that much more time to finish bringing the mash-out infusion up to boiling. 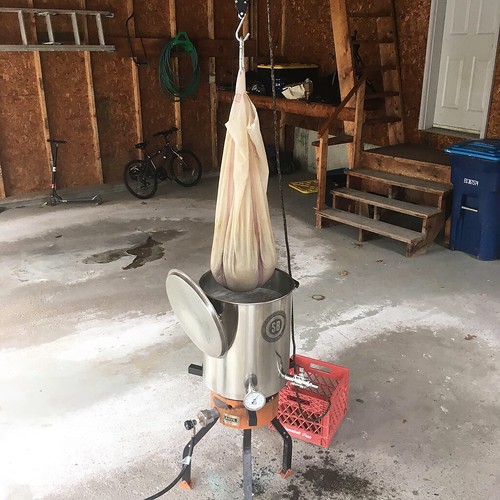 I did the bag pull and collected my 7.75 gallons of wort. Refractometer reported 9.6ºBx (1.039 or so). Added my first wort hops and got the flame going again. Boiled for 90 minutes and then hit the wort with one more ounce of Hallertau at flame-out. 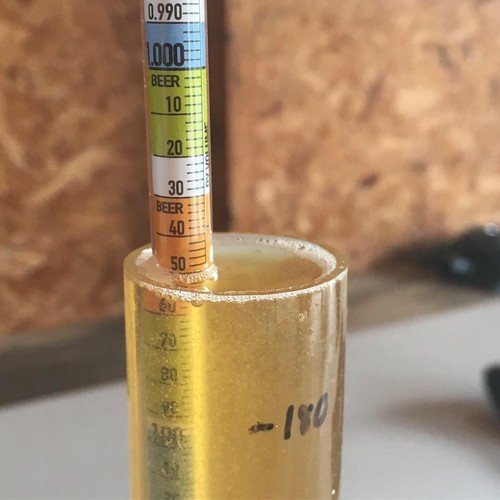 Five and a quarter gallons of wort went into the fermentor with a specific gravity of 1.051. A couple points over my target but… I can live with that.

I got the Brew Bucket into the fermentation chamber and set the controller to 60±2ºF. Within about 2 hours or so, the controller was reading 60.2ºF and I pitched the starter of G03 Dieter — after decanting such that I was pitching approximately 400 ml of slurry and then whatever supernatant was left behind.

I’ll admit that I got a little nervous during the first two days. I wasn’t seeing any bubbling happen in the blow-off bucket. My curiosity got the best of me and I opened the lid of the bucket to see a nice big fluffy-looking cap of krausen. This allayed my concerns, but I also took the opportunity to check all of the clamps and swap the airlock and tubing — just in case there was a tiny crack or leak somewhere. And there must have been because mere moments later, there was plenty of the activity that I expected.

At +98 hours I took a gravity reading (6ºBx on the refractometer) and started to raise the temperature for a diacetyl rest. The beer spent a few days at 68±1ºF before I cold crashed it and fined with gelatin.

The final hydrometer reading was 1.008. Satisfied that it was at terminal gravity, and satisfied that the yeast had largely cleaned up after themselves, I went ahead and kegged the beer and burst carbonated it.

Yes, I indexed strongly on the “serve young”.

It’s certainly the most Kölsch-like Kölschlich that I’ve made. It’s super tasty. Very good, and maybe even excellent?

APPEARANCE. Pale gold but borders on straw when held up to the light. Creamy white cap of foam with dense bubbles and excellent persistence. Excellent clarity, though there’s a slight haze that prevents it from being truly bright.

OVERALL IMPRESSION. Very good — maybe excellent? The alcohol presence is a little on the high side, and the overall beer could stand to be a little more crisp. Might be slightly under-carbonated — but only ever so slightly. Has most of the right aromas and flavors at the right intensities though (the “toasty” might not be truly to style but it works), and seems to live up to the “delicate” descriptor from the style guide. A slightly longer lager might help clear it up even more. Arguably an Americanized take on the style. Very pleasant to drink.

I’d be curious to see how it plays in competition. I might dial the Vienna back a bit (maybe 10%?) to reduce that “toasty” impression to a level where you’d miss it if it wasn’t there but have a hard time placing it. And of course I’d try to get that O.G. down a little so that the alcohol isn’t so pronounced. I might also boost the IBU a little bit. The step mash schedule seems to have been a good choice here, and I really like how cleanly the Dieter fermented.

The all-grain (BIAB) recipe for Sorry Karl (Mk. III) is as follows: