After a four-and-a-half month1 (forced) hiatus, I got myself brewing again.2 I needed to get at least one brew day in before I went back to work, after all.

I’d thought about trying to ease into my Seattle brewing experience with something… less challenging? But when I asked A. what she would like to see for my first homebrew in the new house, she expressed a strong opinion. Something dark and something strong.

Now, my data tell me that my bigger beers have a tendency to fall short of their target gravities, and I haven’t been able to figure out why.3 Nevertheless, the seed was planted, and a “very nearly” Imperial Stout was on the agenda.

Following my usual procedure, I made a mental map of the flavor profile, made an initial sketch of the formulation, compared that against some respectable prior art, made some tweaks, and did my shopping.

Can I just say how nice it is to live now where Imperial Yeast is so abundant? 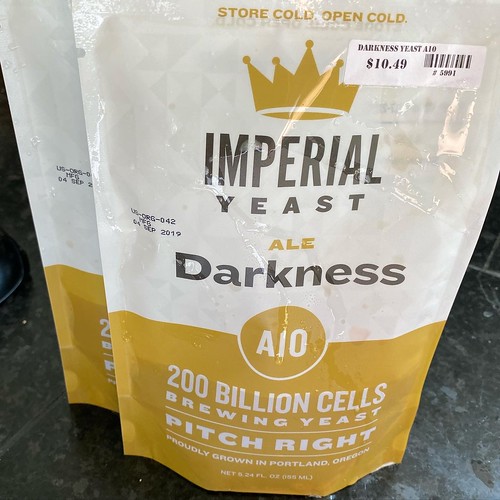 I’ll admit that I was spoiled in my Vermont house, but there’s a serviceable space to work with here in Seattle. 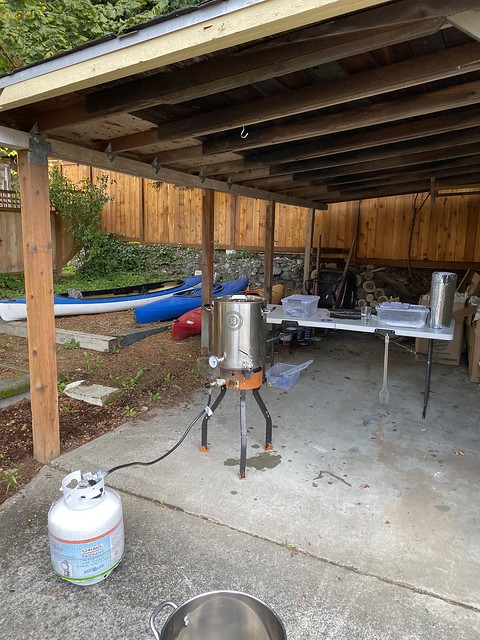 FIRST: I forgot that I didn’t have a lighter. I managed to find some long matches and, while lighting the burner that way was sketchy, it worked.

SECOND: My hose was just barely too short for the space I’d scoped out. I mean… I’d measured everything but I guess measurements can be deceiving? I needed about four more feed to be able to fill the kettle. Luckily I could just fill my smaller secondary kettle and dump. (Problem solved… for now.)

THIRD: The bottom of the bag hung down maybe 1-2 inches below the rim of the kettle — and that was with the hoist pulled up all the way. I had to hold the bag up myself and slip my grill grate underneath of it and then keep both (gloved) hands on it while it drained and I squeezed — so that it wouldn’t fall off. Granted this wasn’t all that different from my winter-time kitchen brewing back in VT… but still.

Having collected my wort, it was time to get the flame going again. But… what about the chiller? With the hose being too short, I had to carefully move everything out from under the carport … and onto the slight angle of the driveway! But at least now the hose would reach. 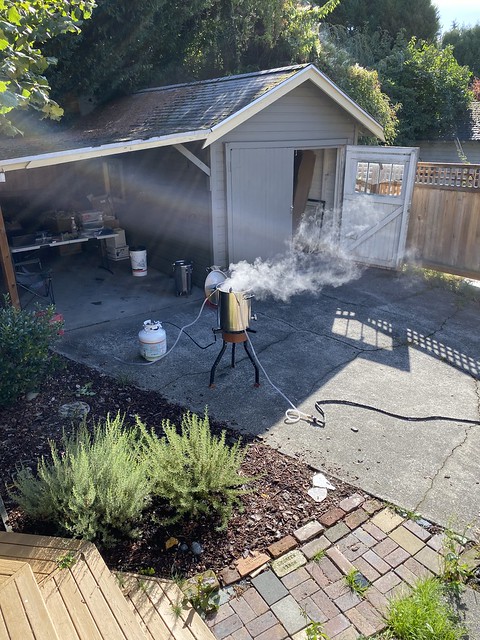 I’d say I was mostly incident free after that… Did my 60 minute boil. Ran the chiller and… I guess just spray that water out into the yard.

Run off approximately 5.3 gallons of wort into the Brew Bucket with a starting gravity of 1.071. 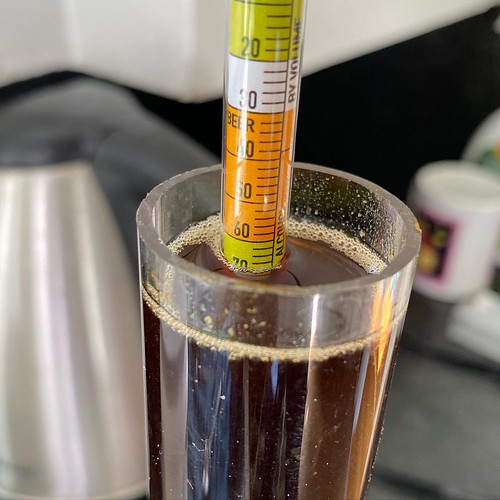 Which hey… only about five points shy of my target 1.076. I’ve certainly done worse.

The chiller got the wort down to 84 ÂºF after about 10 minutes; another hour or so in the fermentation chamber got it down below 64 ÂºF. It’s at this point that I pitched the two packs of A10 Darkness, and locked in my controller at 63Â±1 ÂºF.

Activity in the blow off started within a few hours and just ticked up steadily for several days. I took the first gravity reading at +76 hours. The refractometer reported 9.6 ÂºBx which BeerSmith converted to 1.018.

Given that it finished at 1.0195, it’s probably safe to say that Darkness ripped through this wort and got it to F.G. in 3 days. Just the same, I brought the temperatures up a few degrees at a time for a diacetyl rest.

My October schedule being what it was… it was about three weeks after the brew day before I got this one into a keg. 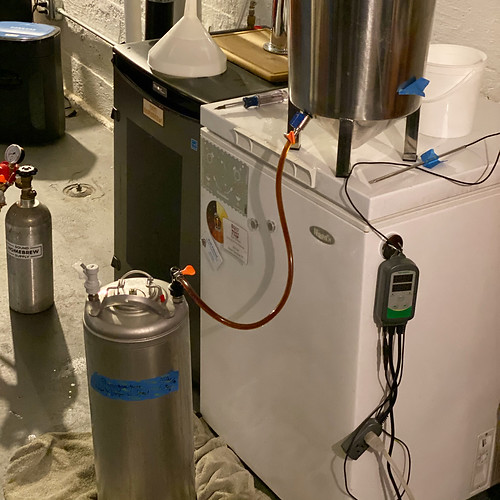 Kept oxygen out as best I could6 and purged that headspace, then put it on 35 PSI for 24 hours. Lowered that to 15 PSI and let it settle and condition another couple days after that.

Far from my best work, but also pretty far from my worst.

OVERALL IMPRESSION. Good (maybe very good?) example of the style if scoring as 20B. American Stout; likely just “fair” if judged as 20C. Imperial Stout. I’m not picking up any obvious technical faults, though the body seems a little light which suggests the mash schedule didn’t quite land where it was supposed to. Aroma and flavor characteristics work well together, but seem to be lacking in the boldness you’d expect from a beer that’s supposed to be “very nearly” Imperial. It’s like it needs just a little bit more of everything: bitterness, malt character, hop character, alcoholâ€¦

When I say I’m not disappointed, it’s not because I nailed it — but because of all the things that could have gone wrong and all of the things that actually did go wrong while brewing this beer. In other words — it could have been a complete train wreck, and instead it’s a drinkable-if-slightly-disappointing beer. High five!

What would I do differently next time?

First off: I need to dial in the ergonomics of my new brew space. I’ve lowered my burner to get better clearance when hoisting the bag. I bought another 25′ length of food-safe hose. I’m sure there are some other tweaks that I’ll figure out over the next few brew days, but those were the essentials for next time.

As for this specific recipe…

I need to figure out what the deal is with my decreased brew house efficiency on these bigger beers. Where is the inflection point? Can I compute some kind of curve for the drop-off? Or is there something else in the process I can control to decrease or eliminate that drop-off?

How about boosting all of the flavors? Given that this was intended as a (nearly) Imperial Stout, it falls short more or less across the board. Tweaks to the grist? Less time in the fermentor? Fresher ingredients?7 A dry-hop charge?

Hard to say without feedback.

Nevertheless, it’s a drinkable stout, and not bad for a first showing here in Seattle.

The all-grain (BIAB) recipe for Primogeniture is as follows:

Starting with the Seattle public water profile as a base: