I already mentioned some Vermont homesickness. Well… it’s not going to be cured by just a single batch. It’s going to take multiples. It seemed fair to clone the mead first because the mead scene here is… not Vermont’s. That said, I’ve been able to get some decent beers. Even some decent rye IPAs. But Light in the Window will forever1 be my go-to. And since BBCO stopped production and we moved 3,000 miles away… there was only one solution to this. Re-group on Clone in the Window:

First… where did we leave off on this one? When we last saw Clone in the Window, the majority of the 5 gallon keg went fast at a certain house party that we threw. In other words, I’d gotten to have some of it, but not nearly as much as I’d hoped. (On the other hand, I had happy guests.) My own notes said: (emphasis added)

When I make this again, I think Iâ€™ll be focusing mostly on process changes. First, I suspect that the mash fell too much too quickly what with the garage temperatures being what they were. A steadier mash holding in the right range will help it achieve the right level of fermentability. (Barring thatâ€¦ dare I say a step mash might be in order?) Second, the dry hopping rate needs to be higher; and although thereâ€™s some romance to using whole cone, Iâ€™ll probably switch to pellets. Iâ€™d also consider switching from 1056 to 1318 and possibly doing part of the dry hop schedule during high krausen.

Which is a pretty good summary of my changes.

Except for when I got to the local HBS and had to change up some ingredients based on availability. Which mostly just means maltsters. (Alas! bye-bye Weyermann rye…)

And then there was the yeast switch — i.e., from Wyeast 1056 to Imperial’s Flagship. But that was calculated.

Regular readers will recall that I had a few… challenges the first time I brewed in our new Seattle home. I did my best to overcome those:

All that in place — time to brew! 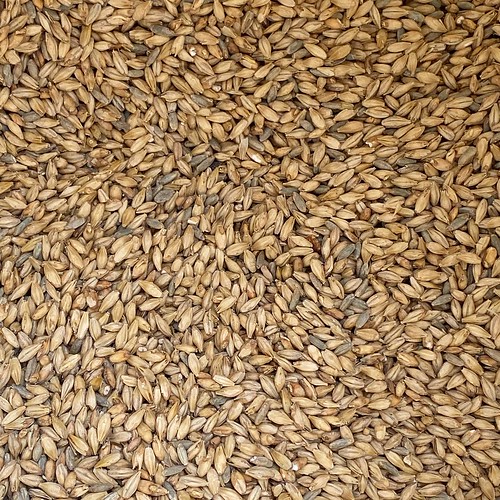 Which of course begins with a frustrating milling experience. Tl;dr: it was getting all jammed up — which is something it has had a tendency to do, but this was really bad! After several (i.e., 5+) false starts, I finally opened up the mill gap slightly and… MAGIC. (“OK nobody touch anything!”)

Got my water collected, portioned out my infusions, got the flame going, and was mashed in by 11:05am. 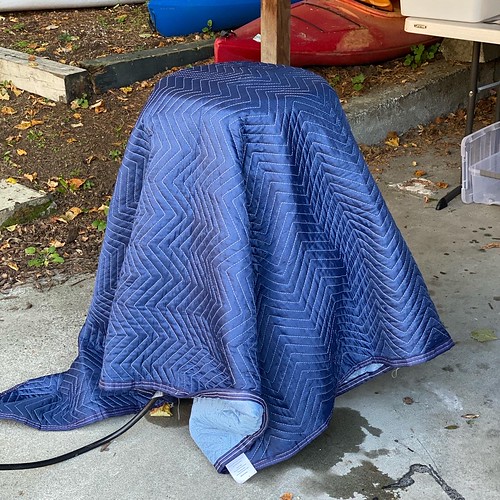 And then a couple of small-ish tragedies.

But we’re too far along to bail out now. Must power through. 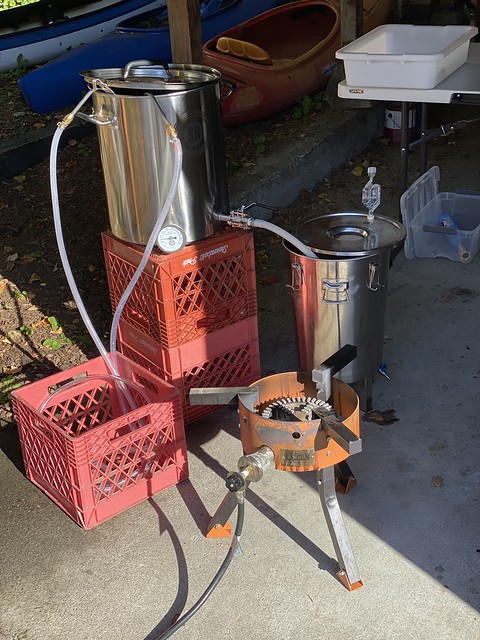 Fortunately everything after my back popping was pretty uneventful.3

When the wort got down to pitching temperatures (<64 ÂºF), I directly pitched the pack of Imperial’s A07 Flagship and set the controller to 64Â±1 ÂºF.

The next morning it was definitely fermenting, so I set the controller to 68Â±1 ÂºF and unplugged the heater wrap to let it free-rise.

At +48 hours from pitching, I added 2 oz. of Chinook, contained in a stainless steel mesh container.

At +86 hours, with fermentation apparently slowing down, I brought the temperature up to 70Â±1 ÂºF. (Yes, I plugged the heater wrap back in.)

At +184 hours, I dropped the controller to 66Â±1 ÂºF. Then (later in the day) it occurs to me that the basement is holding in the low-60s ÂºF anyway and so keeping it in the chest freezer is a waste of energy unless I want to do a full on cold crash. Which I don’t. I moved it out of there and up onto a tall table and took a sample for a hydrometer reading. (1.012.)

At +192 hours, I added another 4 oz. of Chinook for the second round of dry hopping. A little gelatin went in at approx. +291 hours. Then we left for a long weekend.

Packaging doesn’t normally get its own heading in these blog posts but… this was a weird one.

I sanitized my “Brew Bucket-to-Keg kit” as usual, and drew off a sample for the final gravity reading (1.010!) and then hooked up everything. I opened the valve on the Brew Bucket and… nothing happened. Which… wait…

I just drew a sample through that valve. And all the hop matter is supposedly contained in those stainless steel mesh tubes. So… what’s going on? My first thought was: Maybe the compacted yeast cake is just REALLY THICK and covering the racking arm? But if that were true, then how was I able to draw off that initial sample? It’ll remain a mystery though because after a few minutes of this I opted for drastic measures.

I sanitized my trust siphon and just… siphoned the beer into the keg. Done and done. And maybe more Oâ‚‚ than if I’d done it my usual way but let’s face it, none of my transfers are truly Oâ‚‚-free.

Either way… force carbonate and let’s get to drinking it, shall we?4

It’s delicious. It’s not exactly the BBCO beer from my memory, but I guess since it’s out of production anyway, it gets to be my beer now?

OVERALL IMPRESSION. I think itâ€™s a very good (dare I say excellent?) example of the style, but this misses the mark ever-so-slightly as far the source material is concerned. (Maybe Joe was right about the Weyermann rye malt?) Reads like a rye IPA alright — a little rye kick to an otherwise clean grainy-sweet malt backbone, and pile on top of that the characteristic citrus and pine notes of Chinook. That said, the hop intensity is a little less than Iâ€™d wished for (and remember?) — but I still love it!

Changes (or not) for next time?

Anyway, like I said last time: it’s nice to have Light in the Window again, even if it’s only at my house.

Like last time, I donâ€™t feel like this is my recipe to give away. Perhaps Iâ€™ll ask if I can publish it here, and if I get the green light then Iâ€™ll update the post with those details. In the absence of such permissionâ€¦ â€œThe secret is that Weyermann rye.â€5

Clone in the Window (Mk. II), a rye IPA clone by Tilde Gravitywerks

One Response to Homebrew #92: Clone in the Window (Mk. II)