Avout (Mk. II) — the second iteration on my Belgian “More Red Than Dark” Strong Ale. No particular rationale behind why I brewed this one when I did. Just felt inspired. Just felt like the right time.

Given that the feedback from the judges and my own thoughts on that first batch were pretty well-aligned, it didn’t feel like a huge leap to get where I wanted to go, recipe-wise. I did my homebrew supply store run and I was off! 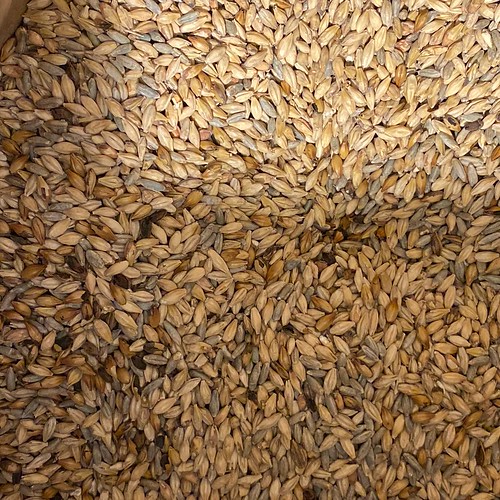 Given how I tweaked my back last time, I decided to take the brew day nice and slow and leisurely this time around. [Fill in this blank with your usual brew day morning set up and prep… but slower.]

Mashed in at about 152ºF — a little high (was supposed to be 148ºF) but nothing a small cold water infusion couldn’t fix — and let it rest for 45 minutes. In the meantime, I got the second infusion going on the stove top. When the timer went off, I added that water to bring the temp up to 154ºF for 20 minutes. Then a third boiling water infusion brought it up for mash-out for another 10 min. 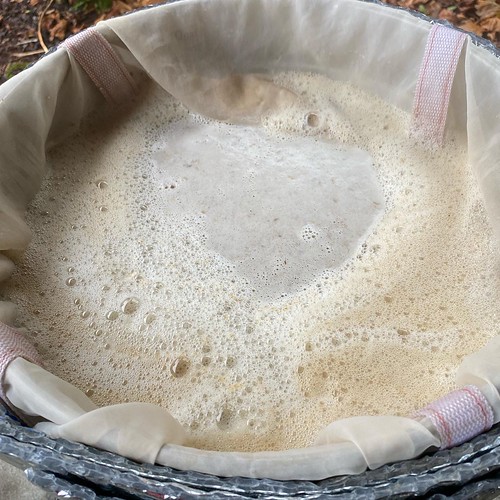 And although I forgot to grab a pH reading, I managed to hit my estimated post-mash gravity of 1.058, and my target volume of 6.75 gallons.1

And so we move onto that boil. 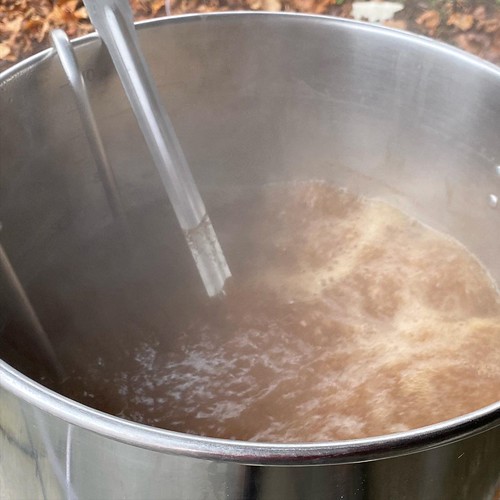 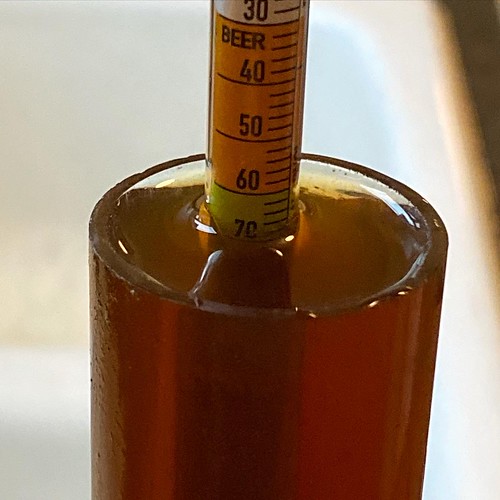 But we carry on! I got the wort into the fermentation chamber, got it chilled the rest of the way down to 65ºF and pitched two packs of Imperial B45 Gnome.2

With yeast pitched, I set the controller to 66±1ºF and opted to try and hold it there until yeast activity had kicked off with vigor. By +17 hours, there was definitely vigorous activity in the fermentor (estimated 130+ bubbles per minute in the blow-off bucket), so I unplugged the heater wrap and set the controller to 72±1ºF to let it free-rise.

I watched it somewhat less closely over the next several days, taking a few more gravity readings, and watching as activity fell off, and the temperature started to drop. When I was convinced that final gravity had been reached, I drew off a large enough sample for my significantly more accurate and reliable hydrometer: 1.012.

Satisfied that it had come down as far as it would, I mixed up a priming solution of 3 oz. of honey, plus another 0.3 oz. of table sugar. The priming solution was added to the keg, which was then purged with CO₂ to the best of my meager abilities. Then Avout was run off from the Brew Bucket into that keg. I brought the keg upstairs and kept it in a warm place — next to the kitchen stove.

After another two weeks, I figured that the priming solution had done its thing. I put the keg into the fermentation chamber otherwise recently freed-up chest freezer and took small samples with a picnic tap until it was some semblance of ready to drink. (Which honestly wasn’t all that long, but maybe I’m just rushing things?)

Mixed feelings on this outcome. I like it. Probably not as much as the first. But I’ve also got my fair share of nit-picks about it, too. 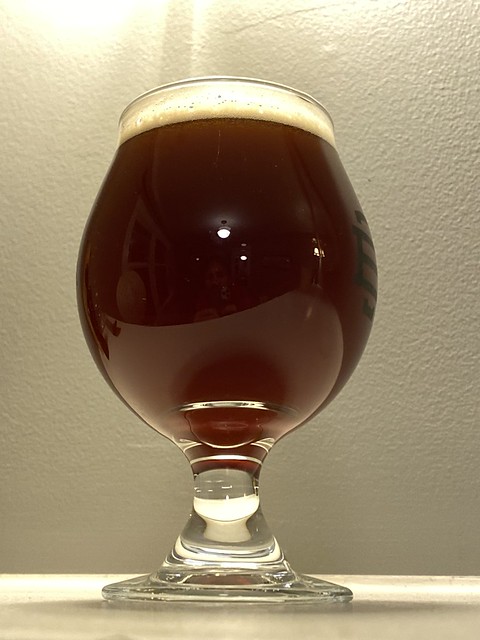 APPEARANCE. Chestnut brown with reddish-copper highlights. Ivory head of dense, creamy foam — though disappointingly modest. However — what head does form has excellent persistence; even after collapsing it left behind a shallow mousse with a moderate cordon. Noticeable legs. Good clarity.

FLAVOR. Leads with a lightly caramel-sweet note, then a moderately strong earthy-spicy impression mid-palate. Light toasted bread. Subtle honey impression toward the finish. Moderate dried fruit throughout — again with the cherries and figs and prunes (in that order). No overt hop flavors, but moderate floral notes retronasally. Moderately-low bitterness. Off-dry finish. Moderate alcohol notes emphasize the dryness of the finish. Moderate malty aftertaste.

OVERALL IMPRESSION. As a Belgian Dark Strong, it’s very good example of the style — no significant technical faults, but veers out of the style’s lane enough to be noticeable. Though the rye malt contributions to flavor are interesting, they are a big contributor to the out-of-style impressions.3 Doesn’t pour with a large enough head, and I wonder if the carbonation isn’t high enough or if something else is at play. Ester impressions are in-band but don’t seem to fully present; I trust my temperature control was fine for this style and strain, but I also wonder if this “Gnome” strain is part of what makes it seem like it’s lacking in that ester complexity and intensity. Also: while this is a beer on the malty side, it seems to be lacking some of the richness and complexity that excellent examples of the style demand. (I’ll need to check my malt bill and grain freshness and consider adding additional character malts or else varying proportions… maybe just try to brew someone else’s recipe and see how it turns out and then compare notes.) Oh — and slightly under-carbonated for style. Seems like a good base, just needs refinement?

On the other hand — were I to enter this into competition as an Alternative Grain Beer… I wonder if it might do better? It’s recognizably a “Trappist-style” beer, and so entering it as a Belgian Dark Strong or a Dubbel as the base beer provides some basis for the evaluation. And there’s enough interesting grain character from the rye that that should be detectable. Granted — most of the other comments about lacking some of the intensity and complexity from the ester profile… that all stands. But it’s an interesting thought experiment.

And where to from here with this beer? I imagine that I’ll try and cellar it a bit longer, maybe see how it develops in the keg. I’ll also be more strict about my yeast selection next time; I’m not 100% certain that Gnome is to blame but… can’t help but wonder. I also suspect that I need to revisit the grain bill all together, but starting from scratch also feels like I’d be calling it quits on this little project and… Not ready for that.

The all-grain (BIAB) recipe for Avout (Mk. II) is as follows: