This one doesn’t get a name. Kinda/sorta/more-or-less like last year. I could name it, but it would be a dumb name. Instead, it’s just the 2019 Seattle Cider — 100% Jonagold juice fermented with Danstar Nottingham. See?

There isn’t that much to say about this one. A brief description of the raw materials I picked up, and a brief lament about what I didn’t do.

First: I got an email from one of the local homebrew supply stores that they were having someone come in with a bulk quantity of apple cider-making juice for pick-up. Having gotten at-least satisfactory results last year, I figured that I would go for it. At a minimum, it would be a low-effort beverage to have on draught for the winter. And given last year’s blend, I thought it would be fun to do a single-varietal cider for a change.

The provider promised juice pressed from 100% Jonagold apples. The email read like so:

Developed through the blending of the Golden Delicious apple and Jonathan apple, Jonagolds are popular because of their sweet tanginess and tart flesh. With a yellow top and a red bottom, this apple is a refreshing snack and perfect for using to create hard cider. The flesh is aromatic with honey-like flavor notes and tangy-sweet thanks to moderate acidity.

And while I’ve never heard of Jonathan apples before, Golden Delicious are one of my all-time-favorite snacking apples. Sign me up!

Second: the lament has to do with the decision I didn’t manage to make ahead of time. Given how low-effort cider generally is, I thought that it might be fun to do the first 5 gallon share “straight” and then experiment with the second 5 gallon share. Hot off the heels of this fascinating story about Vermont’s Krista Scruggs, I wanted to try my hand at a cider-wine hybrid. But I had trouble1 ascertaining whether I could get some decent grape must concentrate or whatever… And then I couldn’t decide on fruit purees to make a fruited cider… AND THEN I chickened out on making a cyser because of just how expensive good honey can be and… Well, you can insert the grimacing face emoji here.

Nevertheless — I got my 5 gallon share for the “straight” cider ordered, and in late November, we were off to the races.

The quotes are because… we’re just picking up juice. 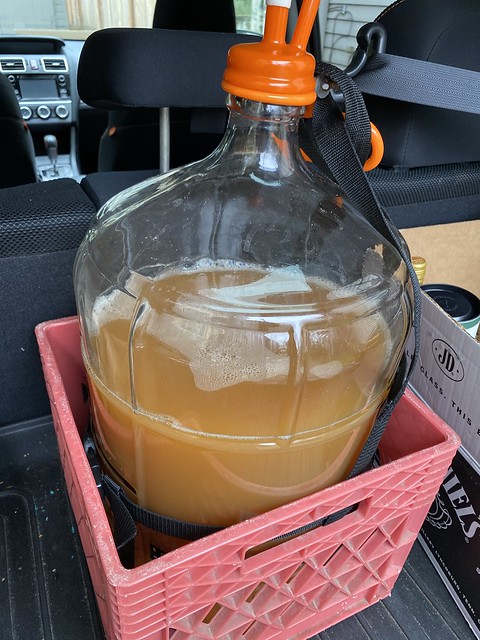 I drove down to South Seattle. I picked up my 5 gallon share of juice. (OK and a couple of other things.) I drove home.

I brought the juice home, and added 2 tsp. of pectic enzyme, and 2 oz. of yeast nutrient, and 5 crushed Campden tablets.

I waited 24 hours and hit it with one sachet of Danstar Nottingham English ale yeast.

Why Nottingham? Because I had some on hand that I needed to use up, and I’d heard from some people that it does a decent job with cider. So that’s what it’s gonna get.

I mostly left it alone after yeast was pitched. 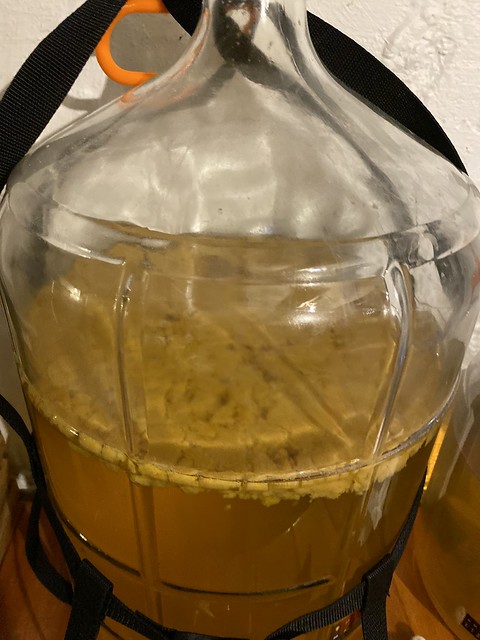 I mean… what else is there to do except count airlock bubbles and check temperatures and take the occasional gravity reading?

In any case, by the time we get to mid-December, gravity appears to have finished dropping, and there’s no more activity in the airlock. The cider is sitting at 1.000 and a pH of 3.56. There’s a little sulfur on the nose, but it blows off — nothing offensive. Time to get it packaged…

…which takes another week or two to get all my ducks in a row. Nevertheless, just under 5 gallons of cider goes from the carboy into a keg. And I have at it with my first ever crank-and-shake carbonation.2

So how did this cider turn out?

A moderately tart but refreshing cider.

FLAVOR. Moderate and distinctive apple flavor — tastes like a mix of semi-sweet reds and tart greens. No significant sweetness; dry finish. Acidity reads as moderately and softly tart. Low tannins provide some structure. Perceptible warming alcohol, but low. Medium-high sparkling carbonation. Medium body. Finishes with a distinct fruitiness which fades into a lingering tart character. Some of the blown-off sulfur is detectable retronasally.

OVERALL IMPRESSION. A very good, and competently made example of the style. Retains enough fruit character through an otherwise thorough fermentation, without also over-expressing yeast character. The sulfur notes detract somewhat; consider a more thorough degassing, aging somewhat longer, or else bubbling COâ‚‚ through the cider to push more out of solution. Sweetness, acidity, and tannin seem roughly in balance for style. That said, the cider itself is not particularly memorable … but then again Iâ€™m not much of a cider judge.

What would I change for next time? No idea. I would be fun to follow-through on my original plan of doing multiple batches with different adjuncts and/or yeast. But that’s a story for the 2020 batch.

The recipe for 2019 Seattle Cider is as follows: