Wherein I write about this beer belatedly, and with some distance. But with some distance (both temporal and geographic), it seems like I’d better write about this one for the sake of completeness, lest my trans-continental move-related homebrewing hiatus cause everyone to think I’ve disappeared. In any event, here’s a little story about the Mashers Scotch Ale that I pretty much just fermented a few gallons of.

In February 2019, the Green Mountain Mashers partnered with 14th Star on a batch of Scotch Ale.1 The recipe was adapted from the Greg Noonan Memorial Wee Heavy2 that appeared in the November 2012 issue of BYO, and (if I understand correctly) is thoroughly informed by Noonan’s own discussion of the style in his book on it.

All that said, the recipe isn’t mine to comment on. Nor the water chemistry they’ve got going up in St. Albans. My contribution here was just yeast selection.

Alas! no real comment about the brew day. My partner was out of town, and I didn’t think that I could bring the boys with me into a real working commercial brewery3 — so I had to sit this one out.

Heard it was a blast though.

Luckily, one of my friendly neighborhood club members was kind enough to mule a carboy up and back for me. So at least I was able to get a five gallon share to work with. 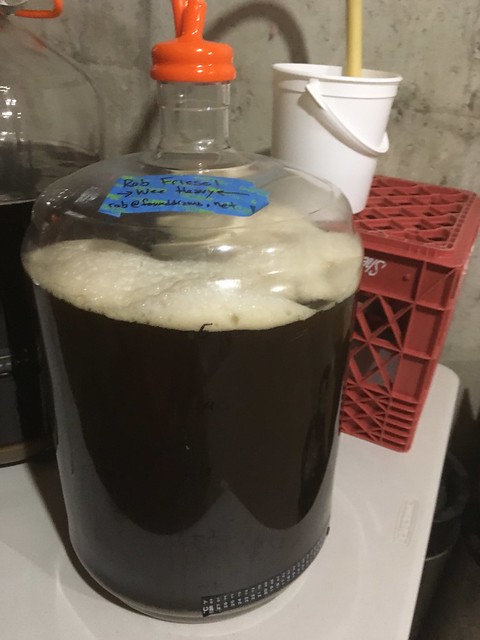 Reports from the brewery were that we had 21ºP (1.087) as our starting gravity. I pitched some White Labs WLP028 Edinburgh Scottish ale yeast from a 1700 ml starter and let it go.

My fermentation chamber was tied up with Urban Owl, but the basement temps in mid-February seemed to be holding in the mid-60s (ºF) — and the yeast didn’t seem to mind… 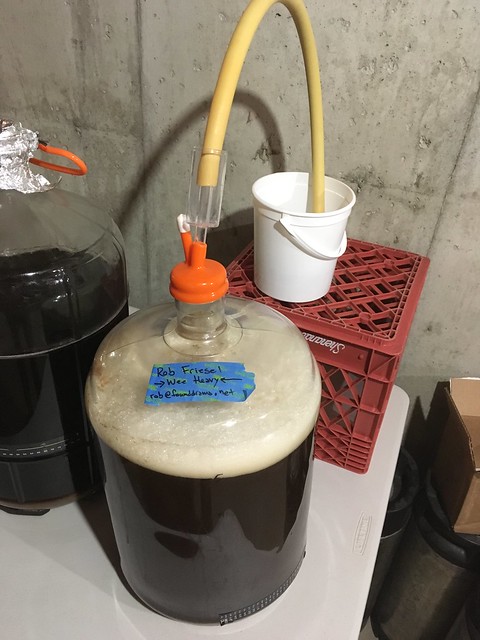 …at least not at first? Fermentation kicked off and I got that nice thick cap of krausen and after about 76 hours or so, the activity in the blow-off bucket was dying down. Which… OK that’s not all that unusual. Nevertheless, I brought the carboy upstairs hoping that the warmer temperature would encourage a little more activity and a complete attenuation.

At this point, I’m asking myself what gives. The samples taste sweet and caramelly which … well, stylistically they should but they shouldn’t taste under-attenuated. But this is also a reason that I’m not generally a fan of the style — I tend to like drier beers. If it’s a question of numbers then 1.029 actually is an acceptable final gravity — i.e., the guidelines have 1.018-1.040 as the stated range. But using that same “by the numbers” rubric, I should be finishing closer to 1.018 — i.e., the 4.6ºP reported by the brewery, and also everyone else is reporting F.G.s in the high-teens and low-twenties (S.G.).

Thinking that maybe my yeast pitch just wasn’t as healthy as I’d thought it was, I pitched 5 grams of Lalvin EC-1118 hoping that might help move things along and get it below 1.029. “Just let it go,” I said to myself; “don’t even think about it for a week.”

Granted: I don’t know why I thought the “finish it with Champagne yeast” trick would work here. Maybe because everyone else was finishing lower and that was “proof” that my share “should” finish lower? But then again, of the couple times I’ve tried to “force” a beer lower this way… it has never worked.4

In other words: a week or so after doing the beer with EC-1118, it was still sitting at 1.029 and I had to admit to myself that it was as done as it was ever going to be.

After making peace with a 1.029 F.G., I decided to split the batch two ways. Half of it was primed and went into bottles; the other half was racked onto some distilled-mead-soaked oak cubes in a 3 gallon carboy. 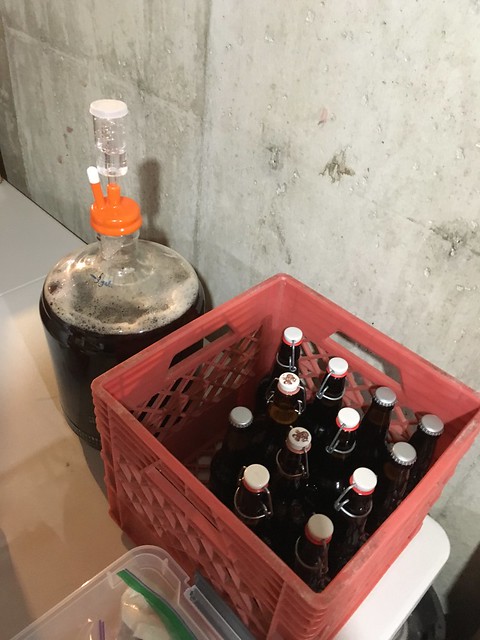 Using the guidance from Andrew Reudink’s “Beyond the Barrel” article (BYO, Jan/Feb 2019), I planned to check back on it in about 2 months. And after those 2 months? Primed and bottled those.

It was… fine. I guess it was fine. My main takeaway was that it was an almost-dessert-sweet beer, but also that it was under-attenuated. I’d be curious on some other judges takes on it, but I don’t think I’d score it much higher than the low-to-mid-20s. It’s not undrinkable, and I couldn’t detect any major off-flavors — other than the residual sweetness which … I don’t know? Maybe it fits as a valid interpretation of the style?

Oaked version: hints of the wood, “noticeable but not substantial” (if that makes sense); no significant “distilled mead” impression. Otherwise aroma notes are the same.

Oaked version: oak character is more pronounced here than in the aroma, but still not “substantial” — mostly presents as tannic with low-level vanilla contributions. Suspect that something about the oak presence boosts the alcohol impressions ever-so-slightly compared to the un-oaked version (maybe that’s the distilled mead?) but again this is a mild layer on top of what is already there.

Oaked version: Astringency is up a notch into low-to-moderate, but it seems fair to attribute that to the tannins from the wood. Otherwise the same as the unoaked version.

Unoaked version: Good example of style? Would describe as “sweet and fairly smooth.” The beer isn’t bland per se but neither is it “rich [and] complex”. In other words — it’s not one-dimensional, but it’s not fully realized. Primary fault seems to be under-attenuation, which shows up as a “worty” undertone to the flavor, and a syrupy element to the mouthfeel. Could also stand to be clearer — perhaps the yeast hadn’t fully flocculated? (Should have fined or cold-crashed.) Many of the descriptors here work “by the numbers” (so to speak) but it doesn’t quite pull together into a complete and harmonious whole.

Oaked version: As a Wee Heavy, it’s just so-so (vide supra); as a wood-aged beer it’s also… just so-so?5 It’s not over-the-top on the wood elements (i.e., shows restraint) which is something I appreciate (go me?) but I also don’t know that I would pick out the wood without having it called out ahead of time. And I definitely wouldn’t call out the distilled mead spirit if entering into competition.

This is a case study in how wood-aging a mediocre beer doesn’t really do anything to improve it.

This is also a case study in how yeast health makes a difference.

The all-grain recipe for the Mashers Scotch Ale is as follows: Actually, I don’t have it. The public Event post on Facebook had some of the details if you want to do some digging there, but I don’t think I ever saw the full recipe. In any event… not mine to share anyway?