Seventeen years in Vermont. My tasting notes don’t go back far enough to give me a beer for every year. But between my memories and the notes that I do have, there’s enough to work with to give it a 10 list.

It was hard to avoid Magic Hat when I first got to Vermont. And it was a revelation. A hell of a lot better than the Killian’s and Molson I had otherwise been drinking, and it was local. Discovered it through a mixed 12 pack. Drank more than my fair share of #9, but Fat Angel was the one that hooked me. It was enough to convince me I should apply for a job there — not that I got it.

Long Trail Hibernator is forever linked in my memory with Ryan C., a friend from work. I can’t remember if Ryan was the one that introduced me to Hibernator, but we certainly routinely drank quite a bit of it together. If memory serves, it was a seasonal release. But it held steady as a favorite for quite a long time. And it deserves to take up the 2003-2006 chunk on this personal history, being so wrapped up in work stuff while A. was trying to get through her PhD. Didn’t really have time (or money) to discover new beers. 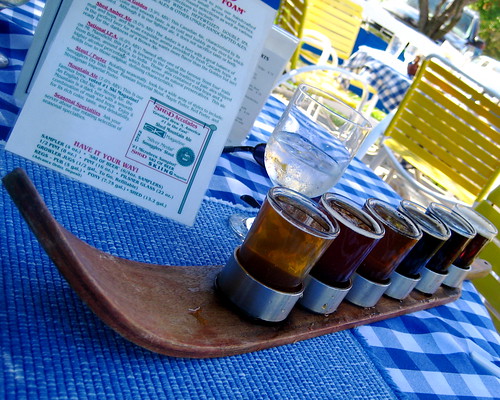 My first (ever?) flight was a “ski of beer” — Shed’s “Hall of Foam”. We got lunch after hiking Sterling Falls Gorge. I already knew there were different colors and flavors of beer but… having them all lined up together like that really drove the point home. The Vermont beer scene had a lot to offer, and I’d been slacking on it. Time to get to work. 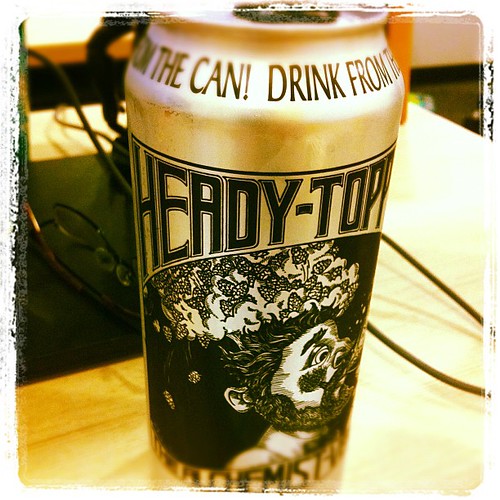 When Hurricane Irene blew up Vermont, there wasn’t a single person who was unaffected. Even if your home came out unscathed, you knew someone who hadn’t. I’d had Heady Topper at The Alchemist pub before, but it didn’t become a phenomenon until this particular tragedy. You could argue that the timing worked out well for them (vis-à-vis opening their separate brewery and canning space) despite the heartache they must have suffered having to write off their tavern. Nevertheless, I don’t know that I would have fallen in love with this beer without all that.

Also there was that time we made Heady milkshakes.

Oh and also that time I differentiated between two month old and two week old Heady Toppers in that triangle test. 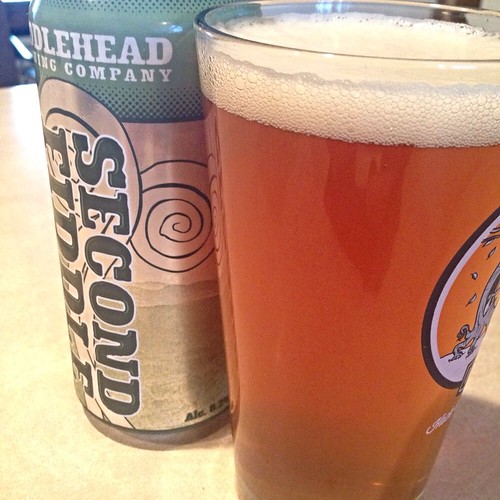 (This is obviously Second Fiddle and NOT Fiddlehead’s flagship IPA but I only seem to have a photo of the former and not the latter.)

Fiddlehead IPA was the first beer I checked into on Untappd — and just days before my second son was born. I was tempted to put Switchback on this list (maybe somewhere circa 2005 to break up that stretch) to represent my go-to restaurant beers. But that title was overtaken by Fiddlehead somewhere around this point. And Untappd became an important part of how I kept track of what I liked and what I needed to try. Starting with Untappd was when I got serious about it. 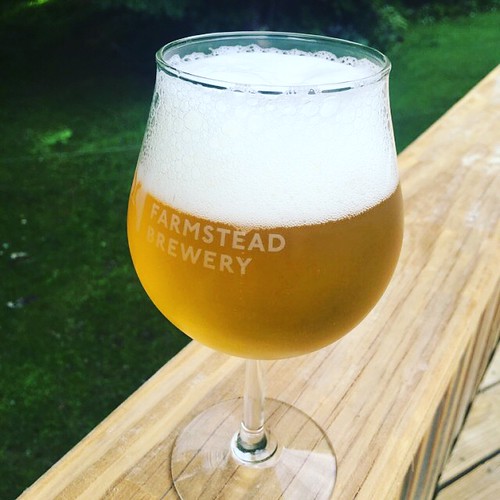 I made “the pilgrimage” to Hill Farmstead in August 2015. I was pretty well-acquainted with Edward from around town, and numerous HFS beers had played a part in our 2014 Lake Eden vacation. Hill Farmstead (the physical place, and the beers) manages to capture a lot about the Vermont experience that’s hard to put into words. That said, tasting Arthur is a lot like tasting Vermont. Rustic perfection.

This was a hard year for us. It started off well enough, but as we hurtled into the bottom third, a lot of things felt like they were going off the rails. This was the year we had to pull E. abruptly out of his preschool and cobble together some daycare plans. If you’re not already familiar with that story, this was the start of the year that I spent every Tuesday (and every other Wednesday) with him because that was when we didn’t have coverage. (And I don’t regret any of that.) Luckily, Tuesdays were “Toddler Time” at Get Air (10am to 12pm) and then we’d just walk around to the other side of the building to Burlington Beer Co. to play some NES Classic and eat some nachos and daddy would get a pint of his favorite beer of all time. So much a favorite that when they discontinued it, I harassed them on social media until they agreed to give me a copy of the brew sheet. Made a decent clone, if I do say so myself. (Plus… this is a brewery that always seemed weirdly in sync with me.)

I worked on Pine Street for almost my entire Vermont experience. I took my Dealer.com job in 2003 when they were based out of the Maltex building, and… that was my commute for the next 16 years. My first memory of Zero Gravity goes back even further though — when I first had some of their beers in the American Flatbread hearth on St. Paul Street. I remember hearing the brewery name mentioned by one of our servers and thinking that it must be a reference to some gravity-defying brewing method. But what did I know? Fast-forward a few years to when they open their brewery + tap room on Pine Street and that becomes one of the de facto Dealer.com happy hour hang-outs. Going there on opening day and getting chilly and picking up a hoodie that became one of my all-time favorite hoodies. But even more so than that: 2017 is the year that H. started his trumpet lessons — and on Mondays we would effectively draw straws to see which parent was going to be the one to leave work on Pine Street, drive all the way back to Essex Junction to pick him up, just to turn around and come back to Pine Street for that lesson. Honestly… I didn’t mind all that much. A 30 minute lesson was just enough time for me to run down the street, have Taylor pour me a Kellerbier (or a Bing Bing, or a Conehead…), and pound it while reading brewing-related articles on Instapaper.

I brewed a lot in 2018. Thirty batches. Upwards of a 155 gallons of beers, meads, and ciders. 1st Republic was effectively my home away from home. I certainly spent enough time (and money) in there working out batches etc. and getting Shawn to tell me what he thought and/or just generally shooting the shit. And of course, why wouldn’t I grab a pint to drink while otherwise weighing out grains and going through yeast packs looking for the freshest one? They took care of me there, that was for sure.

Going big with my brewing in 2018 paid off in 2019. Seventeen beers, meads, and ciders went into the Greg Noonan Memorial Homebrew Competition in May. (Aside: A. was already interviewing with Seattle companies at this point. I bit my lip and played things like this would be our home forever; nothing was certain, everything was on the table.) Maybe some of them were good, maybe it was just a function of playing the odds. But a couple of them won first place, and quite a few else did well. One of those was my amber Bière de Garde (Le Rousse). The big prize for that category? Brewing a 7 bbl batch at Stone Corral. So that happened. Lil Boh Pils on nitro was how we celebrated a successful brew day.

And the mead… Havoc Root of All Evil 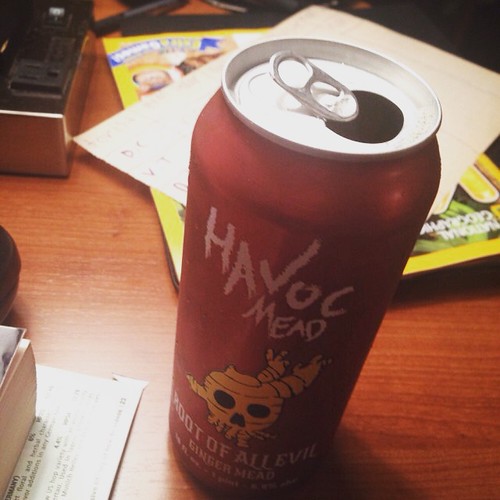 The above beers reflect our Vermont journey fairly well. But it would be a damn shame not to mention the meads. We discovered Groennfell not all that long after they opened in 2014. We became enamored with the meads, and with the proprietors, Kelly and Ricky. We sampled anything they would make. We became friends. Then close friends. We drank a lot of mead with them. Root of All Evil became a house staple. There was seldom a day where there wasn’t some in the refrigerator. I brewed my own clone batched four times [1, 2, 3, 4]. And perhaps the saddest part about leaving Vermont is that I’ll be my own exclusive source from now on.